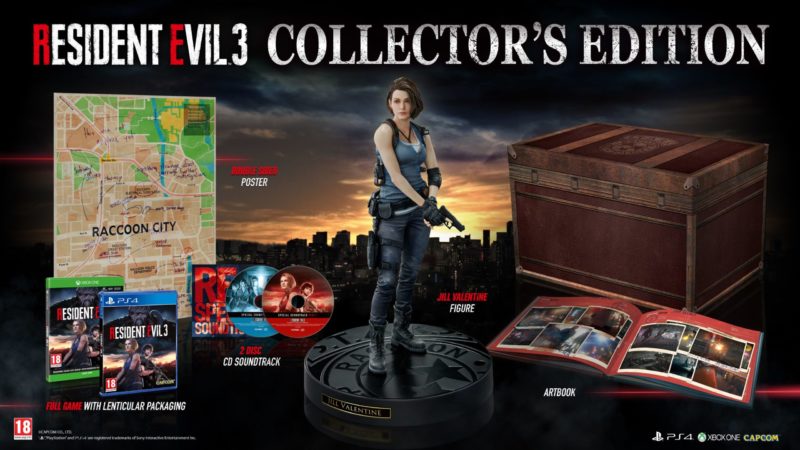 After over a month’s wait, the European version of the Resident Evil 3 Remake Collector’s Edition has finally been announced. While the North American version was announced with the game’s reveal in early December, European fans have been waiting patiently (and by patiently I mean pestering Capcom UK’s Comunity Manager @ImKatastrophe on Twitter). Well, you finally have the chance to slap down a meaty £214.99 at your retailer of choice!

You wanted STARS, we’ll give you STARS. ⭐️⭐️⭐️

The EU collector’s edition of #RE3 is now up for pre-orders.
Please check your local retailers for offerings. pic.twitter.com/Mhyzda72Yq

This contains everything the Resident Evil 3 Remake Collector’s Edition in NA does: the game itself, a Jill Valentine statue, a double-sided map of Raccoon City poster, the Resident Evil 3 Remake soundtrack and the soundtrack for Resident Evil: Resistance as digital downloads, and an artbook. Special to this version, the soundtrack is actually a  physical 2-disc set, and you also get a lenticular cover for the game case itself. The only other major difference is that the S.T.A.R.S. item box case it all comes in is slightly different. It’s probably a good idea to preorder this as soon as you can, as the NA version sold out almost instantly.

This follows up on a trend of each region’s Collector’s Edition being slightly different, although this is the closest any of them have gotten to being 1:1. The Resident Evil 6 Collector’s Edition… well, existed in Europe. North American players got the Resident Evil 6 Archives Edition, which contained all 6 (not counting Zero) numbered Resident Evil games for PS3 players, and CVXHD, RE4HD, RE5 Gold Edition, and the animated film Degeneration on Xbox 360. In Europe, they got the Resident Evil 6 Collector’s Edition, which came with fun BioHazard packaging, a Steelbook case, a set of patch emblems from the game’s various factions, a Tall Oaks Ivy U hoodie (and an Avatar version on Xbox 360), and an artbook. Resident Evil 7 was just as different, the EU version containing a small model of the Baker mansion, a 16GB severed finger USB stick, art book, and a bunch of photos and cover replacers. The NA version had the same idea, but went in a totally different direction — the house model was actually a music box that lit up, the finger was a 4GB USB stick modeled after the in-game Dummy Finger item, Steelbook, replica of the “Dash you against the stones” note from the demo, and special VHS packaging.

Most recently, the Resident Evil 2 Remake Collector’s Edition was starting to close the gap, content-wise, but was still different enough that I’m a bit jealous. Both versions contained a Leon Kennedy statue (which mirrors the Jill Valentine one we’re getting for Resident Evil 3 Remake), an artbook, soundtrack, R.P.D. map poster, and special item box packaging. The EU version, however, also included a Made in Heaven pin, a Steelbook (NA players could get one as well but it was a separate purchase at Best Buy), a set of replica R.P.D. house-of-cards keys, and the soundtrack came on a physical CD that looked like an ink ribbon.

Again, pre-order this before your local retailer is sold out. These go fast! We only have about 70 days left until Resident Evil 3 Remake releases April 3rd, so hop to it!