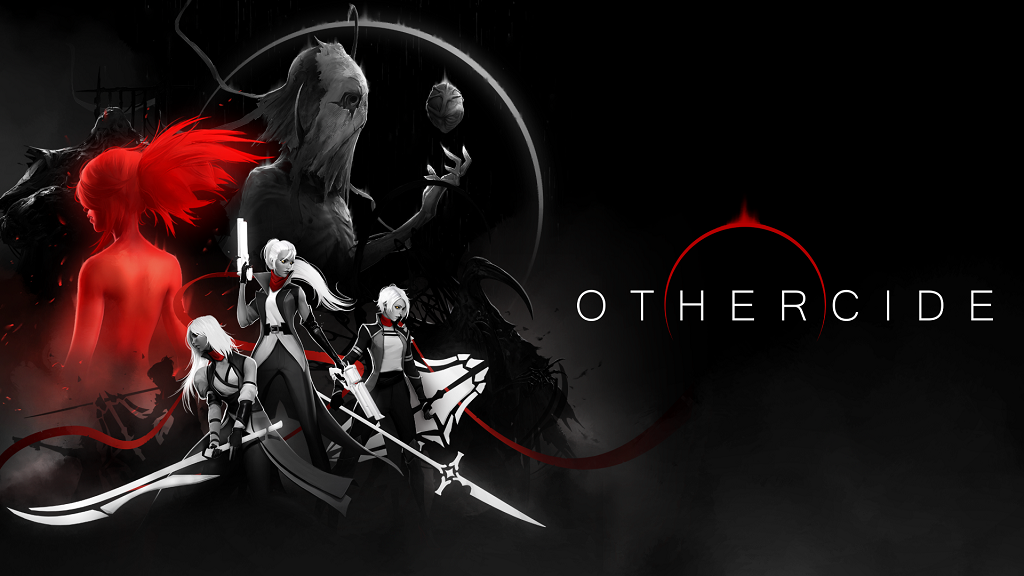 Othercide is the most time I’ve spent on a video game review in a few years. There was no huge push (I’m behind embargo by over a month) and I just got to breathe — to feel it out and make my peace with the experience. The more time I spent with it, the more I wasn’t sure if I should trust my own instincts. I’m still wavering on that now, but I at least have a starting place to explain what I both love and distrust about this odd release.

Othercide comes from developer Lightbulb Crew and publisher Focus Home Interactive. That intro detail is important because this game radiates the same energy of all the Focus Home Interactive games I’ve interacted with over the past few years. Things like Vampyr, Plague Tale: Innocence, and Call of Cthulhu are games that I know are flawed, but nonetheless stick in my craw as perhaps my favorite playable experiences of the year. I didn’t even know that Othercide came from Focus, but I was already heading into my review in the first few hours name-checking those other titles. God, they just hit this specific spot in the grooves of my brain; overriding other standard critical perspectives and making me do little giggles of nightmarish joy.

They’ve got my number. 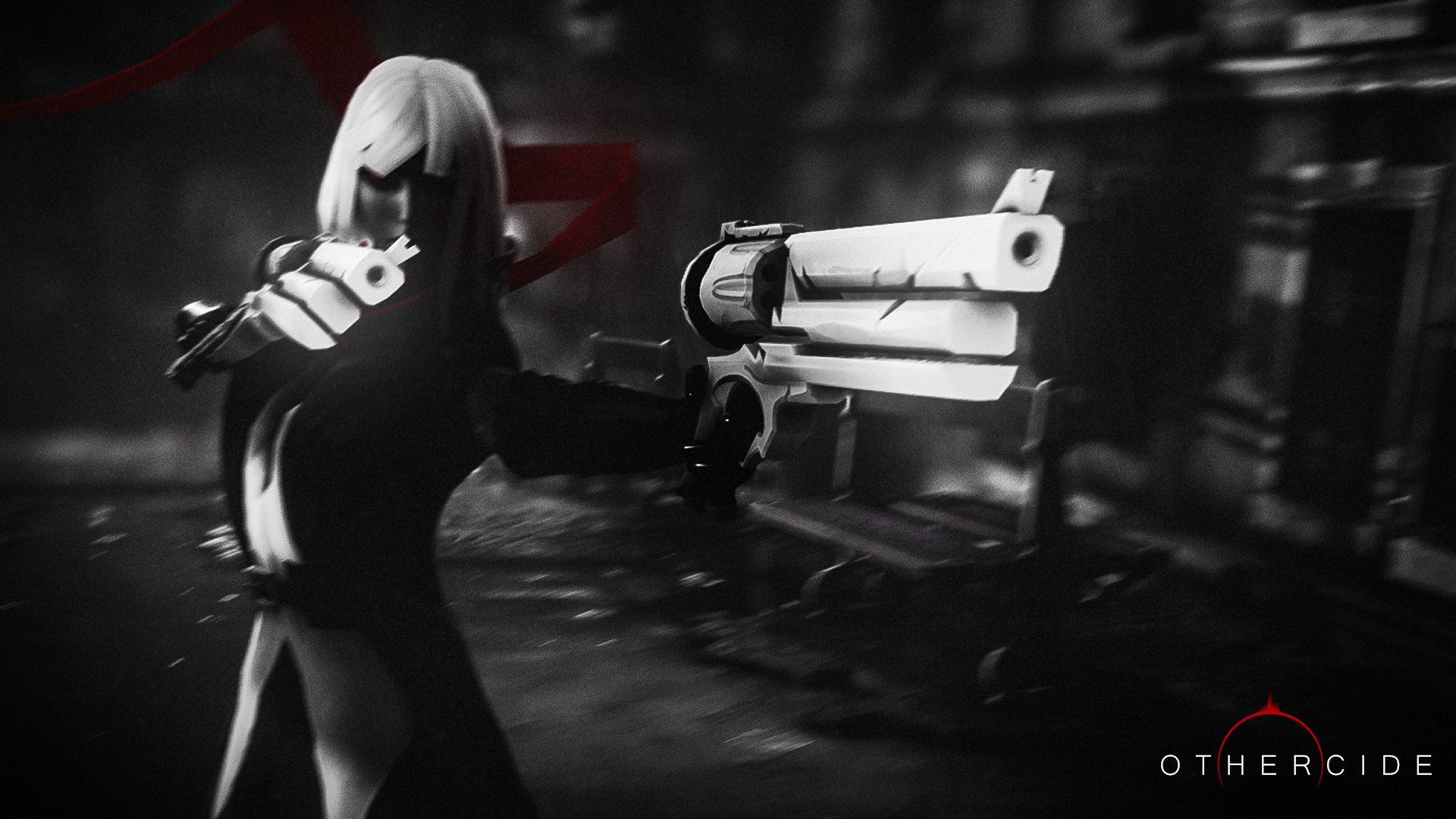 Othercide is a turn-based strategy game set in a time-bending — and reality-distorting — hell world. The shortcut here is to imagine XCOM by way of a Guillermo del Toro film. This highly stylized battler takes thematic cues from Clive Barker, visual cues from Sin City, design cues from Bloodborne, and the rest of it is draped in Hot Topic mid-aughts goth. There’s so much that should cause my eyes to roll out of my head. But much like Focus Home’s takes on Cthulhu and vampires, somehow these games can lean painfully into stereotypes of the genre and still fill me with delight.

It’s borderline annoying. Perhaps I am an easy mark.

In today’s odd adventure, Othercide places you in the role of The Mother: a goddess whose mission appears to be keeping the fabric of space-time from rupturing. In the opening sequence, space-time ruptures because you die. Oopsie-daisy! While you cannot fully resurrect, you can summon a series of Daughters as soldiers in your name. You send them into battles, they level up and learn skills, and return to your warm embrace in a base location (dubbed The Void because… well, it’s certainly either in Hell or nothingness.) Your daughters learn and grow. And then they die terribly. 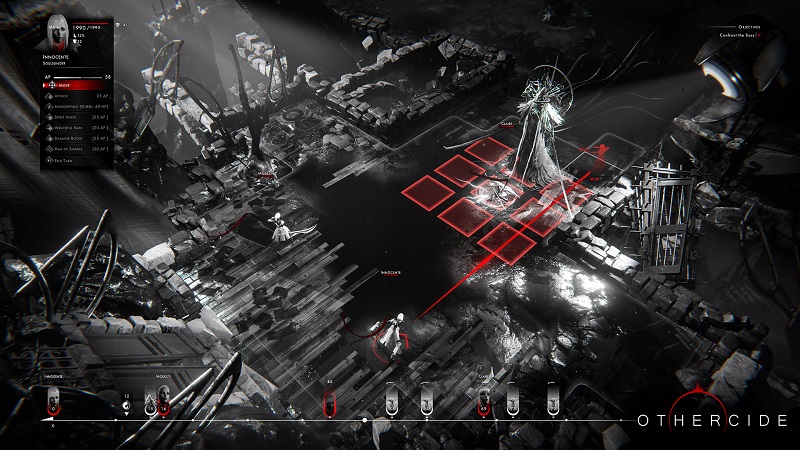 Othercide lets you know from the outset that you’re going to lose. A lot. As an XCOM save-scummer who can’t bear to lose my soldiers, I was worried that I was setting myself up for an incredibly unpleasant experience. But the reverse is true. Othercide is at its most pleasing when you meet it on its own terms of loss and torture.

Again — thematic cues from Clive Barker. I should’ve been better primed for this.

Akin to roguelikes where some skill-sets or upgrades will carry over from playthrough to playthrough, a full party loss here merely restarts you at the most recent Act savepoint and restarts you with power-ups, skills, memories, attacks, and even the ability to resurrect your dead characters to keep building them up ‘til the literal ends of the Earth.

I am, not traditionally, the biggest fan of carry-over roguelikes. At the very least, losing a run tends to feel like a bit of a kick in the shin, and it takes me a while to come back and try again. For whatever reason, by engaging in the game’s outright insistence on the inevitability of failure, I found myself repeatedly plummeting into the gaping maw of death; envious of what new strength my Daughters would be reborn with in their next resurrection. I actively pursued loss. With glee. Because the rewards granted me the strength to come back and confront the horrors that tormented me previously, and absolutely whoops their ass. 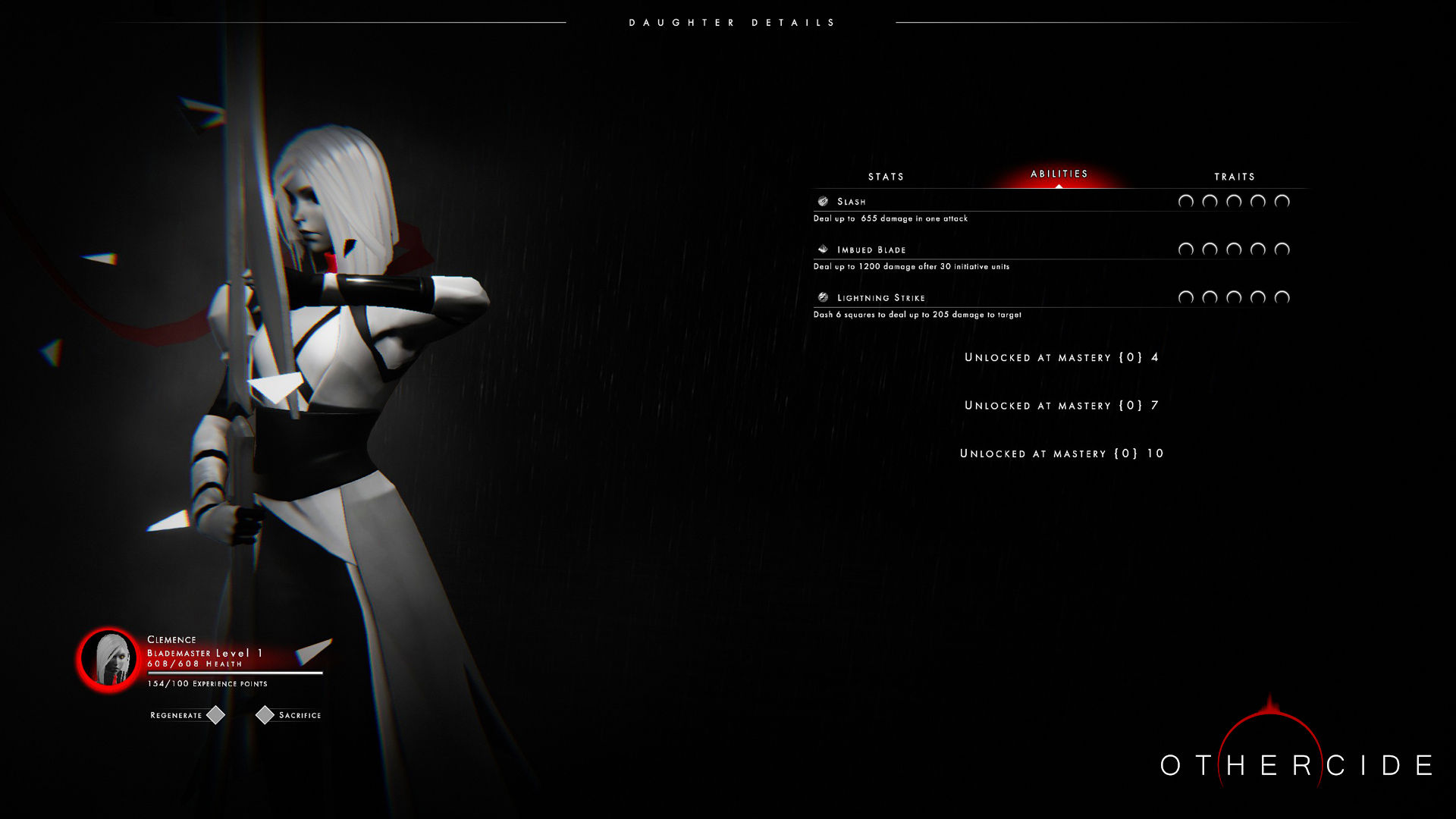 This black and white world, with flashes of red from my Daughters as they exterminate weird plague doctors and tentacle monsters… it was a gameplay loop that I found unendingly rewarding. But as aforementioned, I’m not sure if this is for everyone? I can’t ignore that there are pitfalls in quality at points, between repeated enemies and levels, situations that are unreasonably guaranteed to destroy you, and a disorienting mix between the genuinely creepy and the kind of capital “C” Creepy that insists upon itself. Othercide is a mix of too many and too few ideas, between a combat system that will probably bore most after the first few hours, and an in-depth series of mechanics and lore that go deeper than a mid-budget title like this should ever have dared engage.

Otherside is high art and low art but absolutely nothing in-between. There’s no median point. If you’re like me, you’ll love what you love and scoff at what anyone could have done in this space. But at the end of the day, I… adore this? Dozens of hours in, I’m positive I’ll keep sinking time into it long after I’ve finished my review which doesn’t happen in my world often. This is my highest praise). 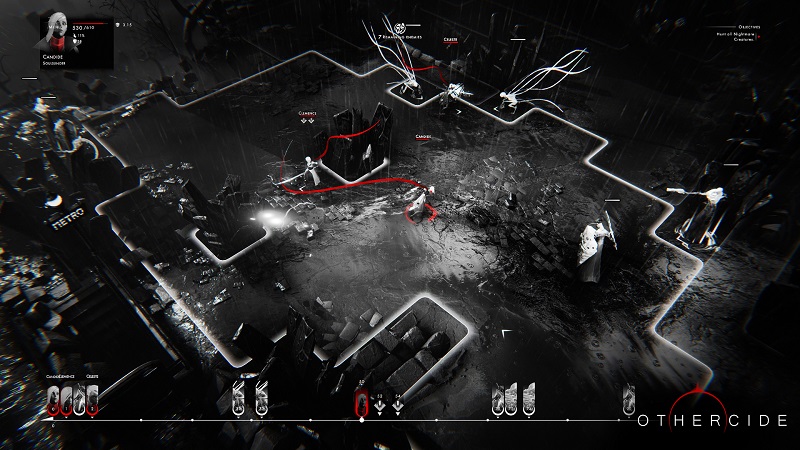 Complicated boss battles, a bizarrely upsetting universe, and bite-sized battle chunks were enough to sell me. The surprising depth of everything around the gamic experiences, including the stories and the surprise buffs, and the use of an ever-altering timeline as a prime gaming mechanic — all of this sells the surprise hit as familiar, singular, and at worst, memorable.

There are some blemishes along the way, though. Escort missions yield the greatest rewards, but they are so unbelievably unpleasant that I rarely opted to tackle them. The gameplay loop is probably not for everyone, and maybe I’m exaggerating my enjoyment of it simply because I was able to really shut my brain off for a few hours, which isn’t the best compliment to a strategy game (I think?). And encountering situations, enemies, or mechanics that you simply don’t understand yields either shrugged shoulders or a genuine sense of the eerie. It lacks polish, but some of those rough edges are what kept me coming back for further punishment. 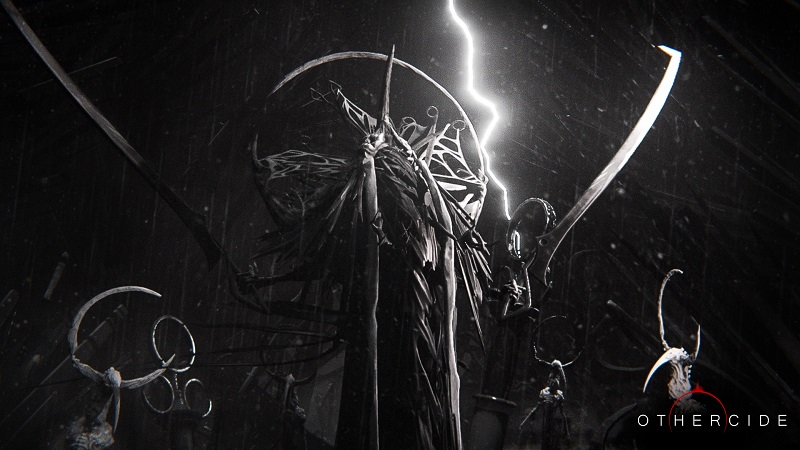 Othercide is a goth-rock tribute to magic women slaying Eldritch monsters while developing randomly generated personalities that turn their trauma into superpowers. I adored my time in this universe, and you could do much, much worse than dipping your toe into the bloodstained pool of Lightbulb Crew’s distorted vision.