A lone cello plays at the end of the world. Darkness and decay seep through walls, settling into the streets only to be picked up on coattails and carried through the city. A mysterious contagion ravages the population. The chorus of a thousand healthy pulses drums in your ears, reminding you that you are so very hungry. These are your friends and patients, friends, and enemies, and only the latter group is available for midnight snacking. You are Doctor Jonathan Reid, and your life has taken an unexpected and rather unwelcome twist.

After what feels like an interminable wait, Vampyr is finally here. Over the next twenty-four hours, players around the world will boot up their systems and download the game, eager to play. Some, having waited for reviews, will start a bit later than others. For those players: Yes, it is absolutely worth the price and the wait but with a few serious caveats.

First, though, let’s discuss what Vampyr does well. At the very top of this list is storytelling, followed closely by character development, and sound design. The soul of Vampyr is an RPG, immersing players in the life of Doctor Jonathan Reid. His story starts from the first second of gameplay, with no background given until players have already survived the trial of hiding out from vampire hunters at daybreak. Once that minor detour is taken care of, the first chapter begins and players learn about Jonathan’s past and present at a slow but steady pace. 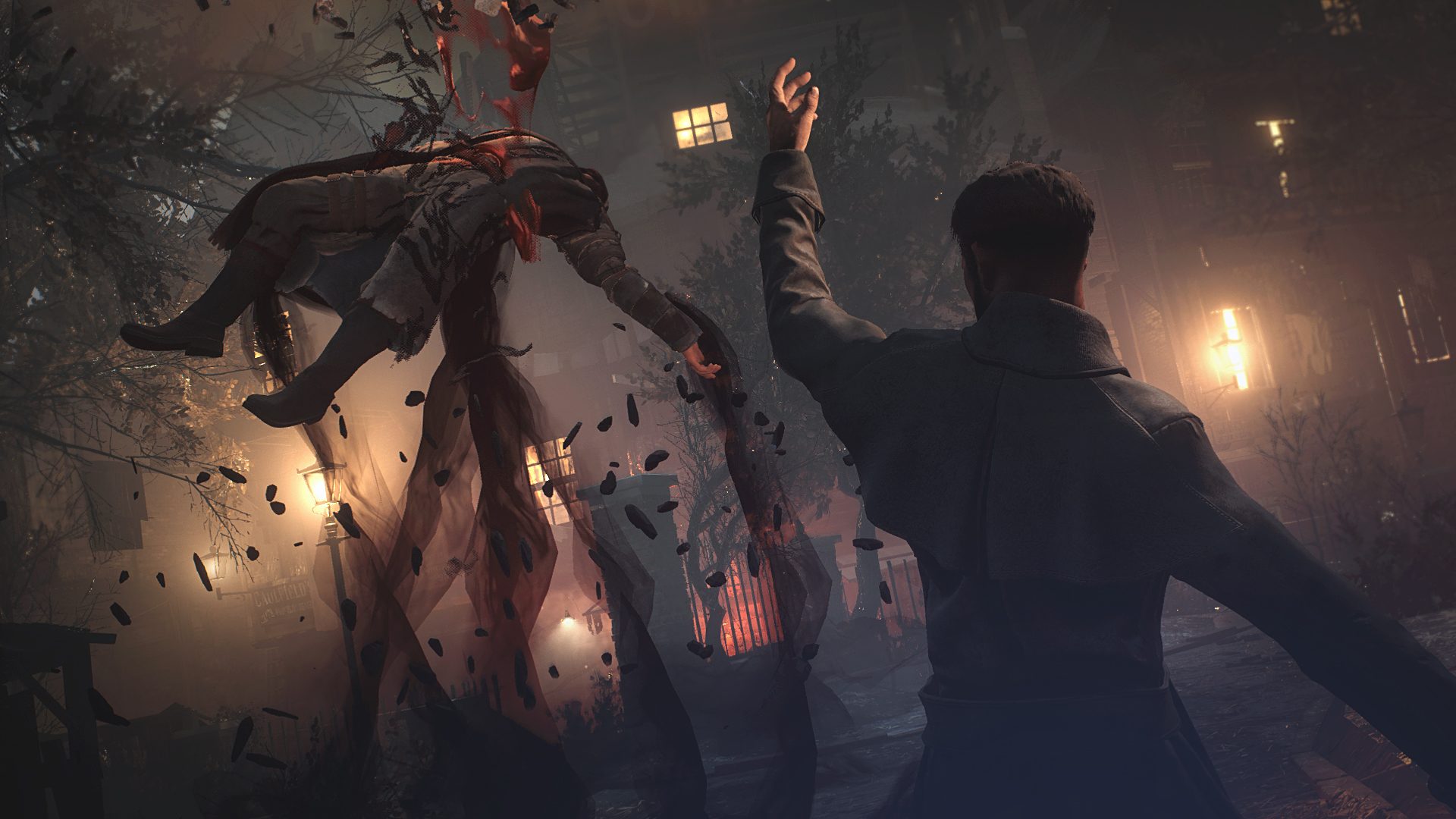 Pacing is everything in story-heavy games. Vampyr is crafted carefully to allow characters to develop at a speed players can keep up with. This is helpful, as four different areas of town each boast about a dozen characters Jonathan must interact with. Remaining NPCs are split between enemies and filler characters who wander the area but have no real dialogue or bearing on the outcome of your game.

These dozens of interactable characters are mostly human, and all are edible. Jonathan gains experience through combat, plot progression, and embracing — intentionally consuming — citizens. There is no difficulty setting when you begin the game, merely a warning that difficulty is tied directly to the choices players make regarding who, how, and whether to munch on the inhabitants of London’s dreary streets. In this way, Vampyr contains countless moral choices. Each task undertaken to discover clues and get to know characters raises the experience gain should they become dinner. Each one eaten raises Jonathan’s own strength, but makes the area more hostile and potentially blocks hints about other characters or eliminates side quests.

I spent a fair amount of my time chasing down lost belongings for citizens to complete side quests. The potential future point boost was a minor influence, but the pay was always good enough to help me afford rare parts to upgrade my weapons. While spending points on skills required careful consideration, spending shillings on parts did not. Hit every trash can in London and you’ll stay stocked on pills. Kill every enemy you cross, and you still won’t have that last handle part. Similarly, I traversed the entire city every night to drop off medications made with scavenged pills. While embracing characters impacts a region’s health, illnesses randomly applied at the beginning of each night drop health status much faster. It was not uncommon towards the end of the game for a single night to result in twenty newly ill citizens across four districts, along with one or two whose condition degraded because I wasn’t willing to trek all the way across London for just one person with a headache given the circumstances. Throughout the course of the game, Jonathan must make considerably difficult moral decisions through dialogue options. The main storyline has several of these, so players cannot expect to avoid them entirely by refusing to eat their fellow man. Some of these are fairly easy, while others require very careful consideration and entirely alter the feel of the game. This sort of predicament gets worse as the story progresses, leaving players constantly second-guessing their own decisions as allegiances come down to the wire.

While the storyline itself is beautifully crafted, there is much to be said for the graphics and sound design of Vampyr. While there are a few lighting and clipping issues, there is nothing incredibly displeasing about the visual quality of Vampyr. The worst graphics anomaly is when lighting filters through characters’ heads, making their eyes light up from within in a way that implies vampires might be the least of London’s worries. Who can be concerned with the undead when there is obviously a demonic invasion beating down the doors?

Developer DONTNOD dedicated one of their behind-the-scenes vlogs to the sound design and music of Vampyr. After many, many hours playing their game, I feel that their vlog did the sounds of Vampyr no justice. Exquisite cello music, at turns hauntingly discordant and explosive with feeling, backs every step Jonathan makes. Those steps are perfectly matched to their visual counterparts, doing massive favors to player immersion. Stamped metal floors, wet pavement, and gravel crunching into the edges of encroaching grass are all heard as the city passes underfoot. More unsettling are the hundreds of noises made by different types of vampires hidden throughout the buildings and alleyways, the cries of immortal suffering and monstrous rage.

While I could write for days about the many things Vampyr does well, there are two that account for a full point removed from the overall score I award this game. Both are combat related. The first is that enemy encounters are incredibly unbalanced unless players choose to feast on citizens. This goes against everything in Jonathan’s character, causing a huge rift between the story being told and that we must play. I understand wanting players to make sacrifices on who to eliminate, but the scale is tipped so far in favor of Jonathan’s enemies that there is no reconciling the choices that would make the game truly enjoyable with those that are true to Jonathan’s moral code. The other issue is combat itself. Somewhere along the line, someone told the developers at DONTNOD that their combat system was enjoyable. When the vampires attack, that person should be served as an appetizer, because they are not to be trusted. That person? They lied. Hard.

Several questionable design decisions converge to make the combat of Vampyr downright taxing. Among them, locking players into an area once they attract aggro is the most unforgivable. Doors and jumps become unusable once combat begins, so players must be incredibly careful to look for enemies using vampiric senses before walking into a new area, or even around a corner. The simple act of opening a door may prove fatal, and in most cases, reloading will place you face-first in the same sequence until you beat it. Git gud, I suppose.

The targeting system is a requirement; turn it off and you won’t land a ranged shot or effect. Without targeting, even dodging and close combat are ineffective, leaving players stuck on long loading screens while the system resets the scene of development crime. As a note, in this generation of consoles load screens shouldn’t be long enough for drink refills or restroom breaks.

While players must use targeting and watch their stamina, blood points, and health meters all the while juggling skill timers, serum counts, and weapon toggles, enemies apparently get a free bump of coke and a lollipop. In combat, a correctly dodged enemy attack leaves enough room to land a jet between you. The tip of a sword coming within five feet, even if you’ve moved out of the way and are now behind them, acts like it has an area of effect. Actual AOE attacks might as well be carpet bombings, leaving no space unscathed. This is especially true for boss fights, which I must assume were play-tested by someone who didn’t feel like turning on the game, marking everything as perfect and taking a very long lunch instead. None of this is to say that Vampyr is unplayable. I managed, despite only embracing two characters throughout the game. One of these absolutely deserved it, the other was simply a necessary loss so that I could pass an entire gaggle of minor enemies on a street and get on with the story. The story itself is fantastic, and with a lot of practice, the combat is frustrating but not game-breaking. There are plenty of opportunities to improve, as the streets refill with hunters and vampires the second you leave an area, and there is no fast travel. Basic street-filler enemies level up each time you sleep and spend your points, compounding the unfair combat situation. Grinding in an RPG isn’t my favorite thing, but it works as a solution for those players who have the time and determination to do so, and a personal issue with eating their friends for skill points.

As for accessibility, Vampyr has a few hiccups that may be overcome with assistive devices. If you are particularly prone to issues with dexterity or have slow response times, you will probably need to cull a few more citizens than other players to make combat feasible. The hearing impaired will be glad to know that there are options for subtitles, as well as  optional names on the subtitles to make the speaker clear. The use of Jonathan’s vampiric senses shows enemies ahead, even through walls, making the game playable without relying on positional sound. Visual effects throughout the game include flickering and bright lights, and brightness settings might not vary enough for low-vision players to get a working view without adjusting their monitors as well.

Vampyr is an excellent game, giving players who loved the emotional impasse of Life is Strange a new bittersweet experience to enjoy. While frustrating, combat still adds a sense of import to Jonathan’s travels, and character relationships are perfectly balanced to keep players from ever knowing just who to kill. There is a little something here for everyone except those of you who dislike gore. For you, this way lies only suffering… though that is fitting for the game at hand.

A PlayStation 4 review code was provided by the developer.