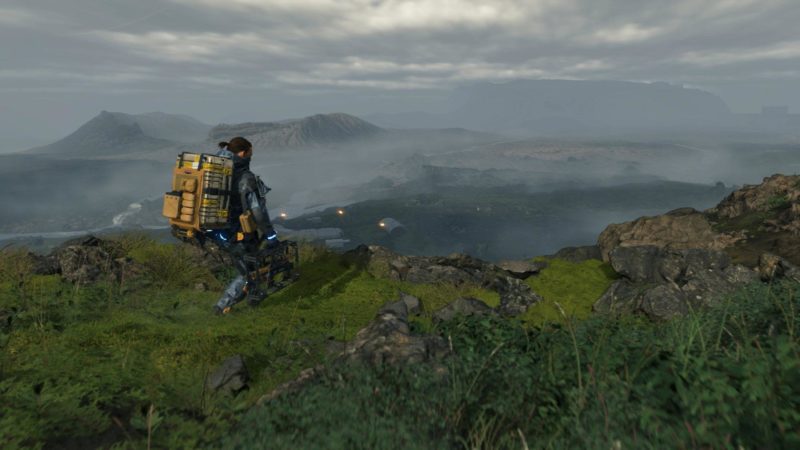 So if you’re uh… new to Hideo Kojima’s games, let me give you a quick run-down. This dude loves politics, especially American politics, but world politics as well. He loves them in a very Roland Emmerich way sure, but he loves them never the less. Each and every Metal Gear game drips at the seams, overflowing with his deeply charged political beliefs and pretty heavy-handed messages. It should come as no surprise then that his new game, Death Stranding, the same angry, ranting political ax will be slapped on the grindstone. Having moved on since the days of Regan era politics (believe it or not, the Make America Great Again jab in Metal Gear Rising is actually about Ronald Reagan) Kojima’s set his sights on the modern age of bullshit. What’s more political these days then the tumultuous and divisive states that America and the EU have been in since the election of Donald Trump and Brexit. When speaking with Game Informer, Kojima was asked how the concepts of the “chiral network”, the strands that connect America in Death Stranding, and how it works. Kojima explained that it’s a metaphor for more lofty concepts:

There’s actually three steps to that chiral network. For Bridges’ sake, you’re connecting from east to west and they want you to join the UCA – the United Cities of America. When you connect, you can use UCA services, but at the same time, they’re retrieving your information 24 hours a day. It’s like 1984. Some people may not like that, and say “I’m not going to connect to UCA, because we’re going to repeat the same thing that we did.” Like Trump, or the EU, these things. It’s a metaphor. However, if you get really close, they start to say, “Okay, I’ll connect.”

If you haven’t noticed by now, Death Stranding carries a lot of… let’s be nice and call it symbolism, regarding the idea of connecting to our fellow man. Extending bridges (get it?) to each other to connect great divides (like actual bridges) between peoples and tear down the walls (get it!?) that separate us as humans. If I had to extrapolate from these thoughts in particular (about Trump, America, and the EU), they seem to be in reference to the general attitude of wanting to have nothing to do with the rest of the world and build legal (and literal) walls to keep separated from others. Kojima is saying “connection good, exclusion bad”. That’s just my take though.

Kojima shares some other thoughts on what he hopes fans will get out of the experience upon completion. He goes on to explain that, at the end of the day, we the players will make what we will of Death Stranding and that that’s the point. He has the metaphors, but we have the interpretations. I’m… not so sure how hard it will be to interpret (the game’s about bridges, the gameplay is crossing those bridges to transport information and materials, the main character is named Sam Porter Bridges, and the former president of America is named Briget), but that’s the beauty of art, I suppose. Everyone has their own takeaway. Just look at one of Kojima’s favorite films, Blade Runner, which is still fiercely debated amongst fans nearly forty years later (Deckard isn’t a replicant dammit).

Plus, this’ll be a great chance to watch the BioShock avatars on Twitter come out to explain how this isn’t political and we should all keep politics out of games.