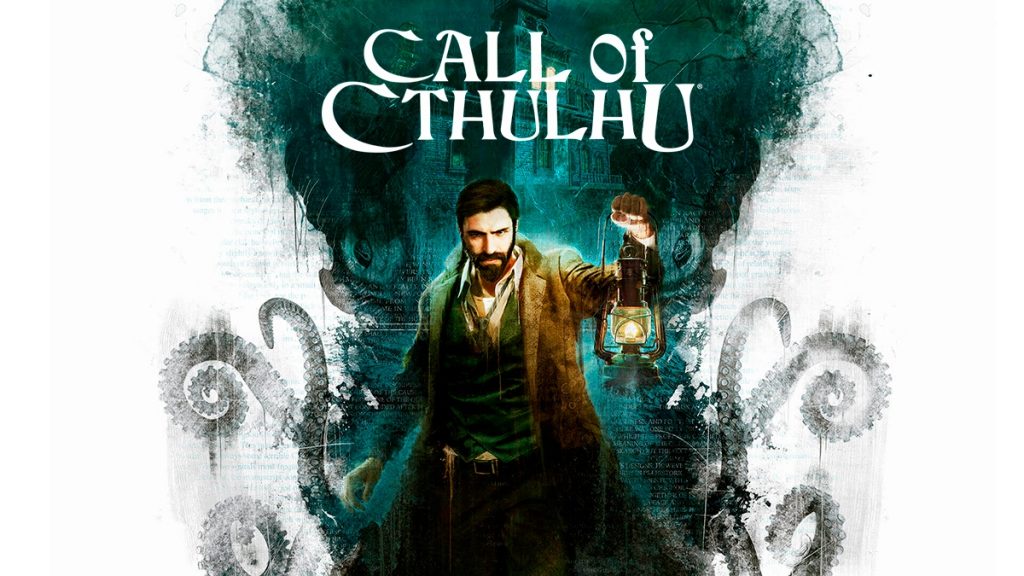 I despise the writing of H.P. Lovecraft. Aside from the unyielding racist symbolism prevalent in nearly all of his work, his writing is dull, one-note, and lacks depth. His characters are all too often frail, one-note white men who seem to be driven mad simply by thinking about their own madness. He is the rare writer who, despite being outdone by both his inspirations and contemporaries, has managed to ferment a lasting cultural legacy, due in no small part to the pure marketability of his Cthulhu mythos, and the pen-and-paper RPG accompanying it.

Developed by Cyanide, Call of Cthulhu is an officially licensed video game adaptation of that very same RPG, originally popularized in the 80s. Despite my disdain for Lovecraft’s work, I actually anticipated this game once I heard the initial pitch — an investigative horror RPG with choices, consequences, and sanity mechanics? It sounded like the psychological-horror immersive sim I’ve been waiting years for.

However, despite marketing itself as an RPG, Cyanide’s Call of Cthulhu is far from what I expected. Instead of a gothic horror Deus Ex, Call of Cthulhu comes across as more of a bizarre amalgamation between a walking sim and the choice-based narrative of a Telltale game, with a pinch of Outlast-clone thrown in. If that sounds like an uneven experience, it is.

Players take the role of war veteran-turned detective Edward Pierce. An alcoholic haunted by nightmares of his wartime service, he’s drawn to the eldritch island of Darkwater when he takes on a case involving the mysterious death of a family. Naturally, nothing is as it seems, and almost immediately the caper is complicated by cults, local crime bosses, and haunted paintings. 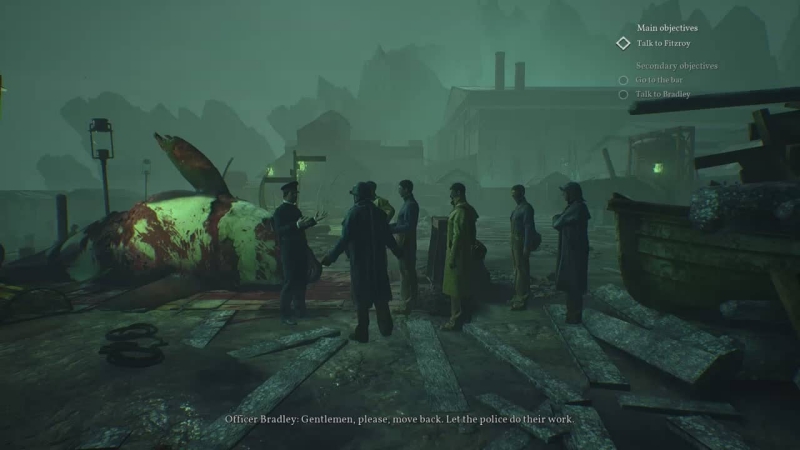 Honestly, the opening of the game does a good job setting up the story and gameplay elements; from the craggy rocks to the unnatural fog, the island of Darkwater is dense with atmosphere and dread. While the voice acting varies in quality from character to character, Call of Cthulhu kept my interest throughout thanks to some quality twists and decent writing.

Players are immediately introduced to Pierce’s character sheet, where skill points adhere to various categories that improve his speech, investigative ability, and more. Initially, I was thrilled by the prospect of an RPG that focused on elements of mentality and investigation rather than health, magic, and strength. There are even two categories — occult and medicine — that can only be upgraded by finding various books throughout the environments, adding incentive and rewards for players who are thorough investigators. But soon enough, the facade of Call of Cthulhu‘s RPG mechanics wore off.

Upon reaching Darkwater, Pierce is able to roam a bit. In any order they choose, players go about meeting the harbormaster in his office, questioning the locals, and searching for clues about the family that died. It feels like the perfect intro for a small open world hub like the ones found in Vampire: The Masquerade: Bloodlines. Unfortunately, it’s all an illusion; Call of Cthulhu is an entirely linear experience and a repetitive one at that. Many of the main areas are visited twice or more, meaning that across the game’s 14 chapters, Pierce will visit roughly 8 total unique environments. 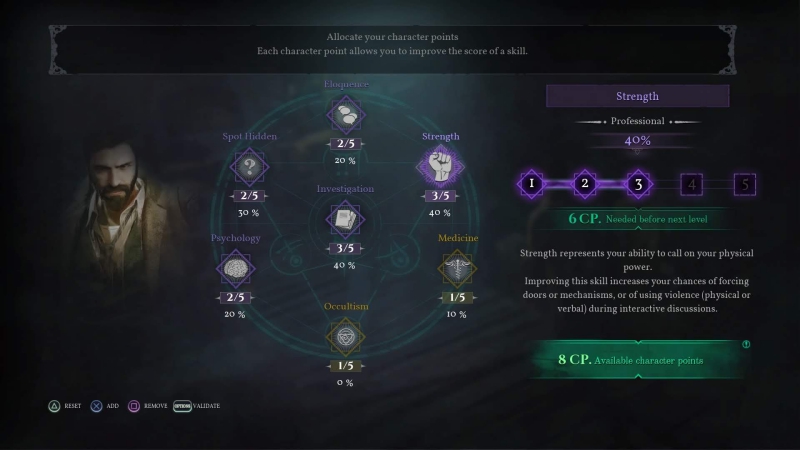 But long before I noticed how repetitive the environments were, I noticed how unpolished the dialogue system was. When first questioning the locals, players are given several choices, many based on current character sheet alignments. If you put more points into the investigation skill, for example, you may be able to ask a question based on Pierce’s observations. Later in the game, Pierce’s occult, medical, and even sanity stats can come into play. Such a deep, stat-heavy dialogue system initially shows promise, but choices never seem to make much of a difference in how the game will play out.

As another example, early in the game, I was tasked with finding my way into a warehouse. In traditional immersive sim style, the game presented this as a puzzle with multiple solutions. I took the most obvious route, which ended with me owing a favor to the local crime lord. I played on, anticipating the outcome, and ended up in the company of a policeman. On our way to the next chapter, the crime lord, seeing me working with the law, came out of nowhere and told me to watch my back. From this point, the story needed to include the policeman, so there was no way to avoid pissing this character off. Even more detrimental to the illusion of consequence, when I finally ran into the same crime lord later, they acted as though they had never threatened to kill me, or that I ever had owed them a favor for that matter.

So about an hour into Call of Cthulhu, marketed as a 12-15 hour semi-open world game where dialogue choices matter, I discovered that the game was in fact very linear and that my choices would color only a few lines in a straight path. I would probably feel a bit different about this if later choices had an impact on the game, or if there were a large number of endings, but there aren’t. Even though I investigated each area thoroughly, Call of Cthulhu comes to about 9 hours and includes roughly four endings, a majority of which result from two late-game choices. 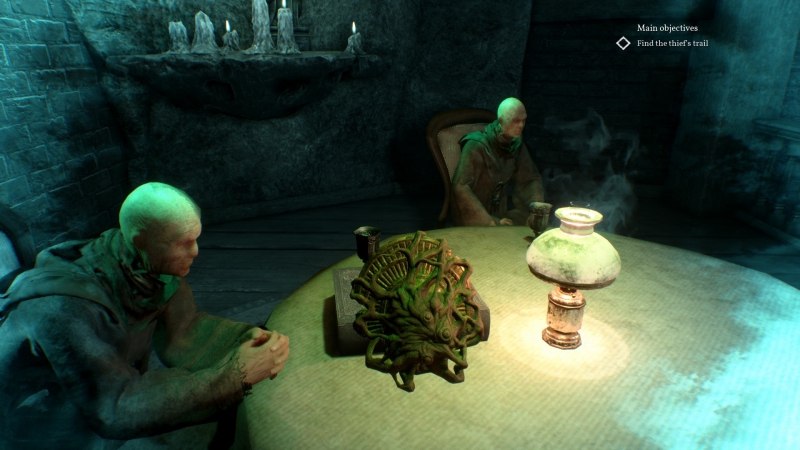 In addition to extensive dialogue sequences, Call of Cthulhu also offers plenty of investigative work, though, like everything else in the game, these portions vary wildly in quality. Through regular exploration, Pierce will pick up clues about the case, but there are also specifically designated investigative segments where Pierce is left to piece together what happened in a crime scene.

Investigation in a choice-based RPG game is an ambitious and promising concept; my favorite part of the lackluster L.A. Noire is that cases can change entirely based on how thoroughly areas were investigated. Unfortunately, no such detail is to be found here. Each investigative sequence is essentially a linear path of often unrelated clues that play out in sequence. Like the game’s mediocre puzzles, these sequences seem to be intended to pad the game’s length rather than offer any actual roleplaying.

Speaking of puzzles, these too vary in quality. Early in the game, I encountered a few environmental puzzles that showed genuine promise, allowing me to find multiple solutions if I was either inquisitive or persistent enough. But once supernatural elements seep into the narrative, the puzzles become surreal, tedious, and entirely unnecessary.

The best example is a lamp puzzle that takes place in a hospital. As with all puzzles, players are left to intuit the mechanics on their own and roam a large, dark environment, alternating between two lanterns. It’s long, tedious, and adds insult to injury by not just having the player backtrack through an environment they’ve already visited, and it also serves no actual purpose to the story. Players enter a door and are thrust into this arcane puzzle dimension, and when they finish, they resume playing by entering that same door. There is no plot progression or roleplaying to be seen; it serves only to add an extra 15 minutes to the game’s runtime. 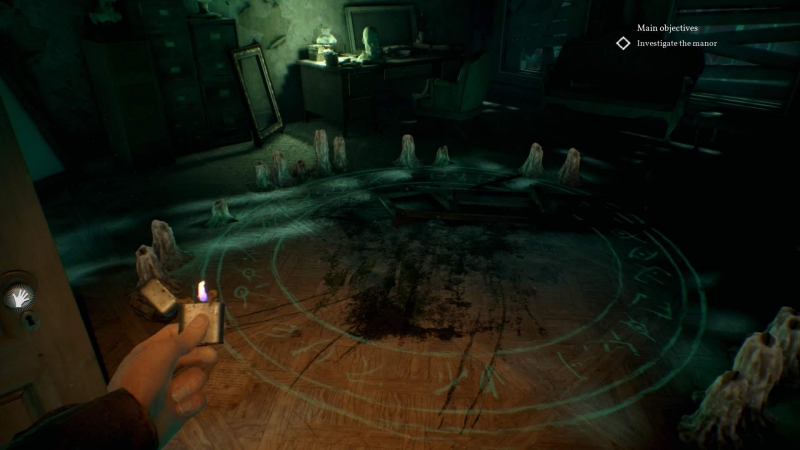 Another promising element, the sanity meter and accompanying supernatural occurrences Pierce encounters throughout, is completely wasted. Initially coming across as a stat that will lower or raise depending on the player’s actions, I was bummed to find out that unavoidable story moments will lower it all the way by the end of the game. It also never manifests in any of the creative ways you might expect from a psychological horror game; there are no nightmarish illusions, unreliable narration, or even fourth wall breaks a la Eternal Darkness. As you progress later in the game, it simply becomes another stat that can open dialogue options that lead to the same conclusions.

To add another disparate dimension to this unsightly tale, Call of Cthulhu includes mandatory stealth sequences. They are graciously kept to a minimum but can be unnecessarily frustrating due to the fact that Pierce dies in one hit (whether by an asylum guard or an otherworldly entity). These sequences are made more frustrating when they’re combined with vague puzzle solving. The lowest point of the game required me to run around a small room trying to find an item to stop my pursuer. The problem was that all of the objects I rummaged through looked stylistically the same —  until I found one that, for some unbeknownst reason, resonated with the protagonist and did the trick.

The one-hit approach to death isn’t scary, it’s just frustrating. To say nothing of the missed opportunities for health upkeep and status effects in an RPG, Call of Cthulhu‘s frustrating designs remove any tension from the situation. I wasn’t worried about Pierce’s safety during these sequences; I just wanted it to be over with. During a late-game sequence where Pierce finally brandishes his firearm, I couldn’t help but laugh out loud at how lackluster the shooting mechanics were, and what a missed opportunity for proper tension and horror the whole affair had worked out to be.

(For those interested, shooting in Call of Cthulhu doesn’t have a reticle. Once an enemy is alerted to your presence, you can pull the trigger and they go down in one shot. That’s it.) 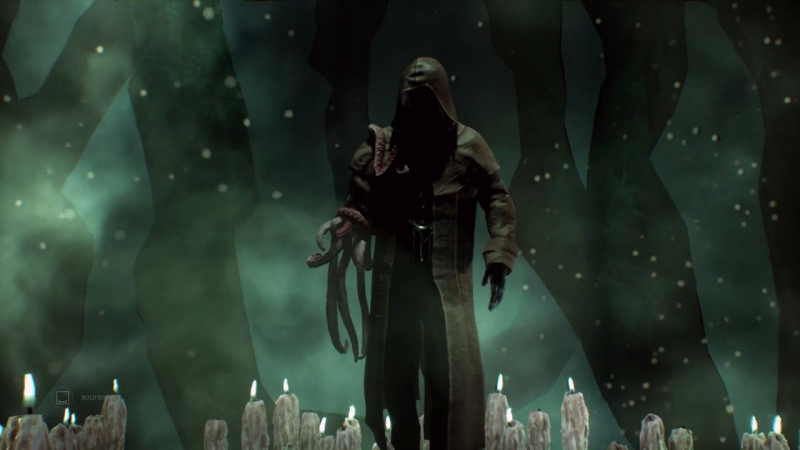 All of this critique has, so far, only been leveled at the game’s structural flaws. Call of Cthulhu comes with a host of other issues, including bizarre sound glitches, poor facial animation, and some spots with blatantly unfinished assets. It’s a shame that the game’s immersion is broken so easily by these issues, because the sound design is positively immaculate and the score is appropriately creepy, bringing the gothic environments to life in a way any horror fan can appreciate.

I realize that I’ve conjured several other, better games like Deus Ex and Eternal Darkness in comparison to Call of Cthulhu. While I generally avoid critiquing a game for what it isn’t instead of what it is, I can’t help but feel that Call of Cthulhu isn’t the game it was intended to be, at least not entirely. There is an alternate timeline where Call of Cthulhu realized its full potential and it’s one of the best horror RPGs of all time. I want to see what that game would have been like.

From investigations to its RPG mechanics and paper-thin combat, no singular gameplay element of Call of Cthulhu manages to work in coordination with another. There is promise in the premise, but it’s impossible to look at its parts and feel like the developers were able to deliver their intended vision. The result is a bizarre milieu that may satisfy horror fans looking for a brief, unremarkable adventure with atmosphere to spare, but will likely be forgotten by everyone else.

I truly hope Cyanide gets another chance to work with this license, or even this genre again because I think whatever comes next down this road could be truly special. This just isn’t that game.

PlayStation 4 review code was provided by the publisher.