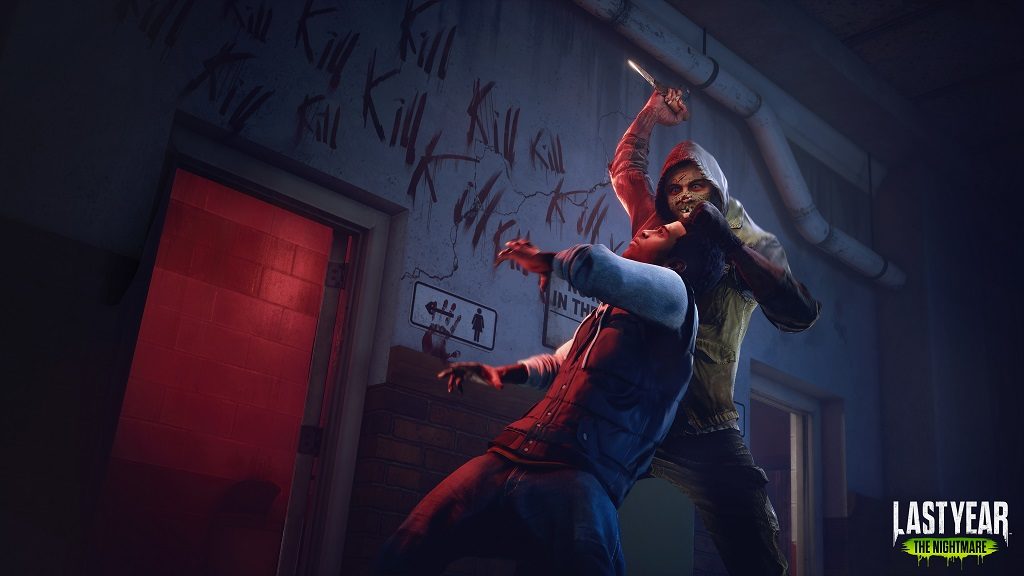 Having arrived on Kickstater a handful of years ago, Last Year: The Nightmare is on the cusp of release, hitting the PC in just a few days. This 90’s inspired horror title has gone through some tumultuous development (which you can read about here) but will finally be seeing the light of day. We recently had the opportunity to ask one of the writers for Last Year about her involvement on the project as a writer for this highly anticipated game.

(Author’s note: This interview was a collaboration between Kazuma Hashimoto and staff writer Danielle Victoria Heard.)

Rely on Horror: How long have you been in the gaming industry?

Kim Belair: I’ve been in the industry just under 6 years. I started out at Ubisoft and have since gone freelance and founded a narrative development company, Sweet Baby Inc, with two colleagues.

Rely on Horror: When/why did you pursue a career in video games?

Unusually, I never intended to work in games. It wasn’t something I had ever considered. I had a marketing degree and was working in branding and social media when I got a LinkedIn messages asking if I’d be interested in working at Ubi. I’ve always been into games, starting out with an SNES back in the day, but just didn’t consider becoming a part of that world.

Rely on Horror: What are some of your favorite video game titles and genres?

Kim Belair: I’m pretty eclectic with my tastes. The Uncharted franchise is probably my favourite, and this year I loved God of War and Spider-Man, but I probably spend the most time thinking about games like Earthbound, Super Mario RPG, Soul Reaver, Night in the Woods, Oxenfree, Bloodborne and Pokemon. It’s a lot.

Rely on Horror: Regarding your work on Last Year, what was your approach to crafting the narrative for an asymmetrical horror title?

Kim Belair: The premise had already been locked by the time I joined the team, but what attracted me to the project was that they were taking an unusual angle on horror in games: beyond just being a bit tongue-in-cheek and over-the-top in their approach, they were eager to create a storyline and a world that was really bound to gameplay. The player is going to play a dozen rounds and these survivor characters are going to die a dozen times. What Last Year does that’s special is make that the actual state of the fictional world: these Survivors are trapped in a repeating “game” and every time they die, they’re aware of it and know that they are going to respawn, though they can’t figure out why they’ve been trapped here. The game’s actually called Last Year: The Nightmare, and the titular “Nightmare” is the dimension in which these teens are stuck. 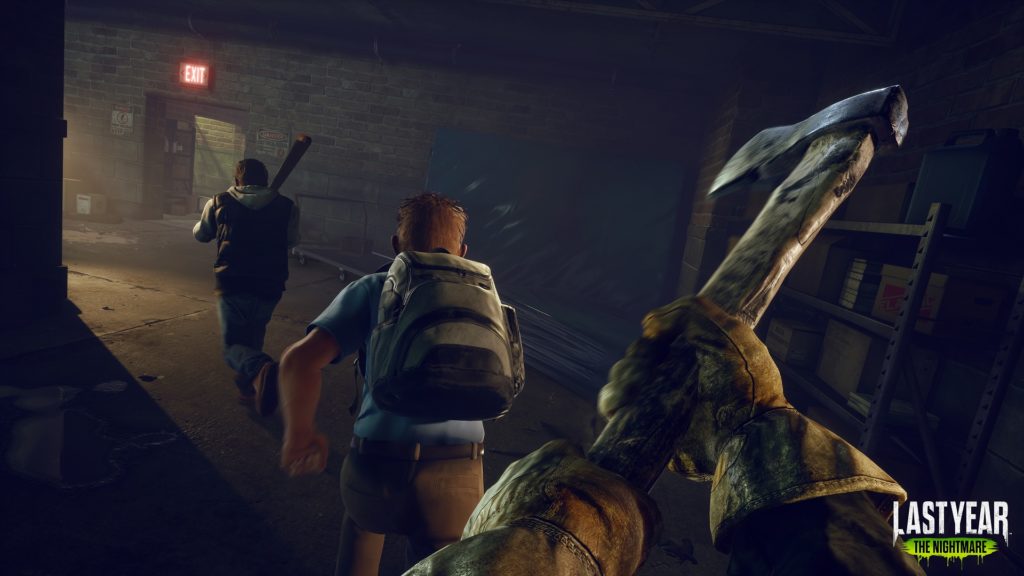 Rely on Horror: Last Year’s character designs are reflective of 90’s slasher films and other horror movies of that era. What was your process in crafting something different for Last Year’s story?

Kim Belair: Having the conceit of “The Nightmare” really helps build the world of the game and pay tribute to a lot of those 90s movies. Something James [Wearing, Creative Director] always mentions is that when you watch those movies with your friends, you’re scared, but you’re not upset, you’re not depressed by the brutality of the on-screen deaths. You’re having fun! You’re laughing, you’re trying to guess what’s going to happen, you’re rooting for the survivors or the killer. And that’s something that was important to bring to the game: you don’t want people to feel sad, you want people to feel pumped, and having the characters be more self-aware both in-fiction and in a meta sense, you’re able to have a lot more freedom to explore that fun side.

Rely on Horror: On your Twitter you mentioned that you took a lot of inspiration from Pro Wrestling regarding ludonarrative dissonance in game writing. Is any of this present for your work on Last Year?

Kim Belair: I think pro wrestling is a good example of how you avoid ludonarrative dissonance: the core mechanic in pro wrestling is, obviously, wrestling, and so all of the narratives, no matter how buck wild, all have to be resolved using that core mechanic. So you have your roster of characters, all of whom express themselves in different ways, and all of them rely on their wrestling ability. Every event, regardless of the theme, must contain X amount of wrestling. All rewards, be they championship title belts or just honour, must be given out for wrestling. It all comes down to using a set of tools to build the story.

As far as Last Year, I wasn’t part of the design process, but in terms of writing, I looked at the mechanics in the game and worked with the team to ensure that what the characters express is consistent with what the game allows the player to do.

Rely on Horror: With the Last Year being an asymmetrical horror title, as mentioned earlier in the interview, did you find creating varied contextual dialogue difficult? What was your solution to preventing these dialogues from becoming fatigued for the player?

Kim Belair: Honestly, one thing I’m really fond of about Last Year is that, more than almost any other game of its type, they really put a huge emphasis on dialogue and building out characters. There are so many lines and they’ve attached them to really interesting places. For example, if the Killer has you in a trap, the character’s lines will be completely different if they’re in the trap but completely alone, versus in the trap as the Killer approaches them, versus in the trap while a friend is nearby. Having that kind of contextual dialogue adds so much depth, and really helps the characters feel alive. For me, it’s a huge win when the player is thinking something and the character voices the same sentiment. 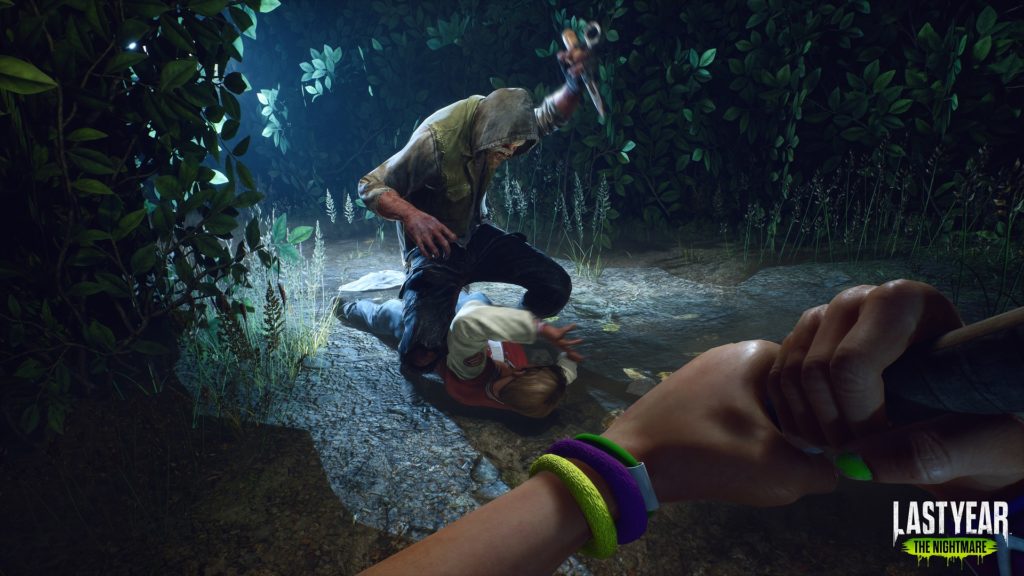 Rely on Horror: Do you work with a team of women or primarily men on your games? And if you work with both sexes, can you estimate the ratio of women versus men?

Kim Belair: It varies greatly! I work freelance, so on some titles I’m working with relatively balanced teams, whereas on others I do find myself in a minority, in more ways than one. It’s been interesting to see the different ways teams work together, and the benefits diverse opinions and perspectives can provide.

Rely on Horror: What have you learned throughout your gaming career and what advice would you give to women and girls that wish to pursue video games as a career?

Kim Belair: I think the best advice I could give would be to believe that their voice is needed. There are so many women and girls with incredible ideas and important innovations who are too often told that there isn’t room for them, or that their perspectives don’t matter. I would encourage them to speak up, make themselves heard, and believe in what they have to offer. I would also encourage them to align themselves with mentors, to ask questions, and to request support if they need it.

Last Year: The Nightmare will be available for PC on December 18, 2018 and is planned to release for consoles in 2019. You can find Kim on her Twitter at @BagelofDeath.