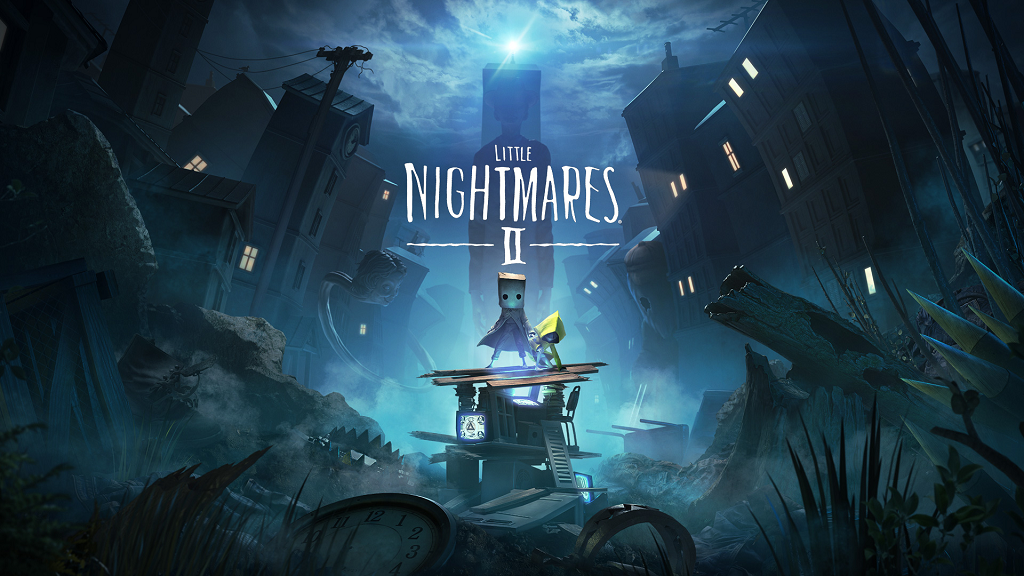 When Tarsier Studios released Little Nightmares in 2017, it struck a chord with its gorgeous and frightening fairy-tale environments, visuals, and scenarios, receiving a lot of praise from the industry. In early 2020, they announced that work had started on a sequel, which would improve and expand on what Little Nightmares delivered. Now that we’ve experienced everything Little Nightmares II has to offer, we can talk through whether those promises held true.

Little Nightmares II sets itself apart from the first game in many ways, with the first being a change of the main character and setting. The original game featured a young raincoat-wearing girl named Six, who struggled her way through a tanker ship full of dark secrets and terrifying encounters. This time around, Little Nightmares II features a young boy with a bag on his head named Mono, who explores an entire city with several locales instead of being stuck on a boat. 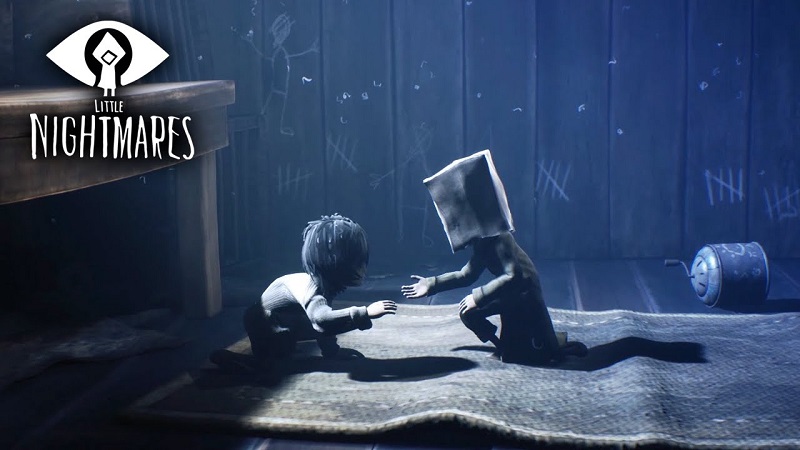 This doesn’t mean fans of the original and its protagonist should fret, as Six also returns in Little Nightmares II as an AI companion who is with you for a large part of the experience. Six helps you solve puzzles, traverse difficult areas, and serves as a great addition to the narrative experience, which explores the bond between the two lost children and their struggle with coming-of-age.

While it does still owe a lot of its DNA to games like Limbo and Inside in being a dark and visually striking side-scrolling puzzle platformer, Little Nightmares II expands upon these foundations and brings many more influences from across the gaming spectrum. 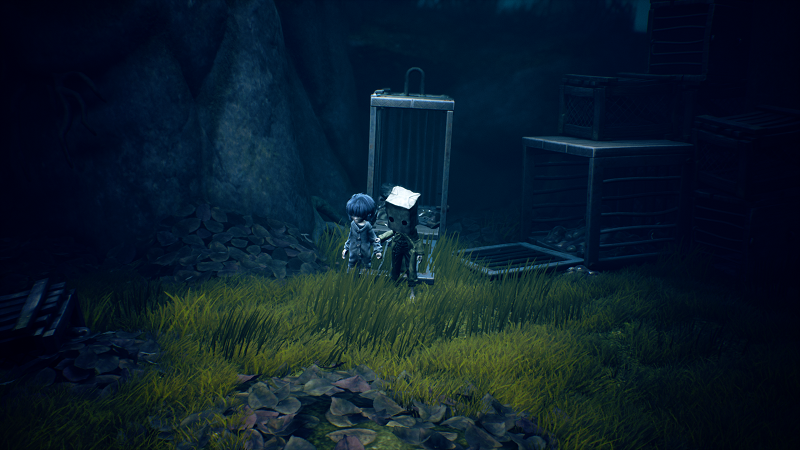 Some of the other new elements featured in the sequel include a combat system, the removal of the lighter mechanic and lantern checkpoint system, and expanded exploration of 3D spaces. These were all improvements or changes that most people requested from the first game, and Tarsier has come through with flying colors as far as these elements are concerned. Each change benefits the game heavily on every level and makes for a much more engaging and balanced experience overall.

Because Little Nightmares II takes place in a city with many diverse environments to explore, it’s also fitting that the game is around two or three times longer than the first, coming in at around an average of 5-7 hours. The longer length allows for exploring a number of different areas, including a secluded farmhouse, a hospital, several apartment buildings, a school, and many more. These environments generally allow for a much darker, creepier journey with more frightening scenarios throughout. 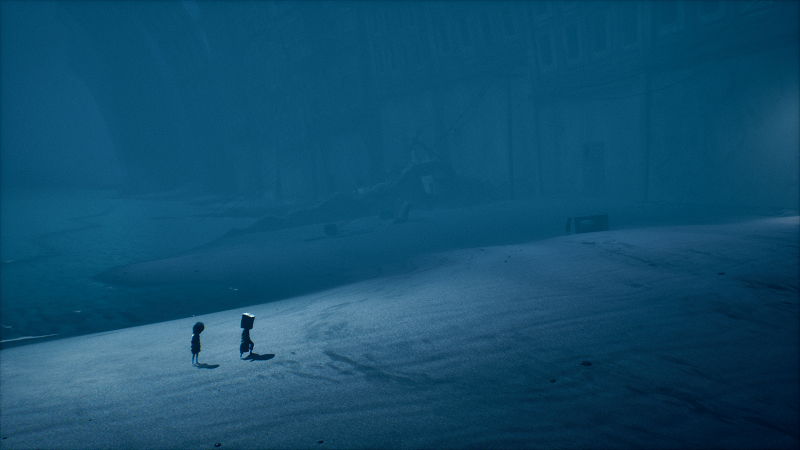 Speaking of the encounters, another thing that has been expanded in the sequel is the types of horrors you’ll run into along your way. The enemy designs for this game are some of the best I’ve seen in quite some time. The twisted, grotesque nature of most of the things you’ll encounter here goes above and beyond the first game. This sequel also gives you the chance to fight back against many of the enemies that are out to get you, from time to time. Some sections still include the heart-pounding chase sections where you can do nothing but run for your life, but sometimes when there’s an object nearby, Mono can pick it up and use it to his advantage.

The combat is appropriately slow and clunky. The beautiful animations allow you to see every bit of Mono’s struggle to pick up the swingable objects, let alone swing them over his shoulder. This makes the combat primarily a timing-based affair, and it can be quite challenging. The advantage of such a system is the immense satisfaction when you land a hit at the right time. There are only a few of these combat scenes throughout, but they’re very well-paced and never feel like they make you too powerful. You’ll always feel just powerful enough to survive, precisely the way a good horror game should be. 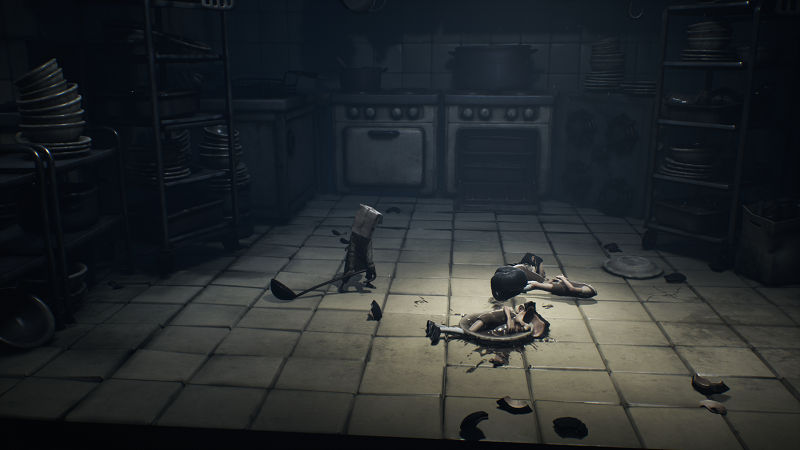 Many parts of the game play out as extremely tense and harrowing stealth sections, which are also puzzles in their own way. These sections are handled similarly to the first LN but seem even more heightened and intense here, drilling down into the terror and panic even more than before. As previously mentioned, the mechanic of needing to continually use your lighter to light your way from the first Little Nightmares is gone. The lighting in the game is designed in such a way to avoid this. Though most of the game is still very dark, it is more easily traversed without an alternative light source.

This doesn’t mean there’s nothing comparable, as there are several pitch-black sections where you instead pick up a flashlight, which you can aim freely in any direction. This not only helps you light your way through dark areas but also helps solve several puzzles and leads to some terrifying chase sections where light is your only defense. In several sections of the game, your focus shifts away from avoiding enemies and more into avoiding traps. Little Nightmares II has some rather dastardly traps that are guaranteed to send you to meet your maker the first time through. These traps are essentially another type of puzzle-solving amongst the game’s more traditional multitude of puzzles.

Though there are many different types of puzzles scattered throughout your time with the game, they all strike a perfect balance and feel related to each other. They sit right in between being clever and challenging, and are paced so that most players will figure them out relatively quickly and keep the game moving along. 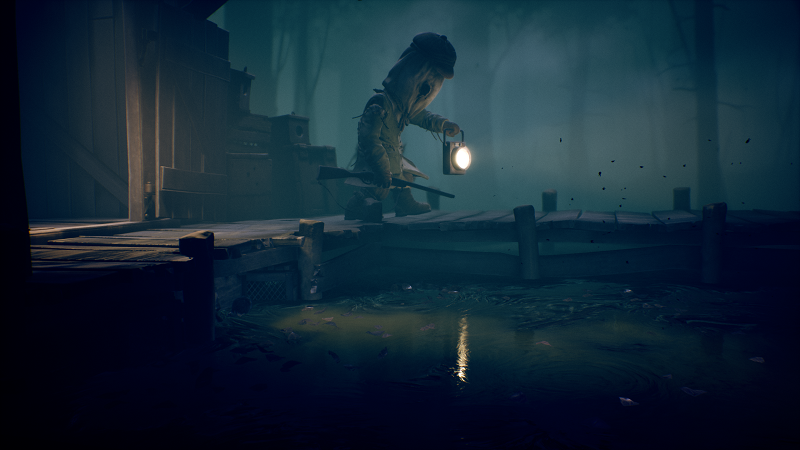 As previously mentioned, Six joins Mono through several sections of the game. The time spent with her always feels fulfilling, as the two of them slowly learn to trust each other more through their actions. When Six is around, you have the ability to hold her hand to guide her to a particular obstacle or point of interest, though she’s usually very capable of doing these things on her own due to her smart AI. Having Six around never feels like babysitting or protecting her, but more like a real friendship and partnership growing slowly. Many of these sections reminded me a lot of the classic adventure game Ico, which seems like it must have been an inspiration here. 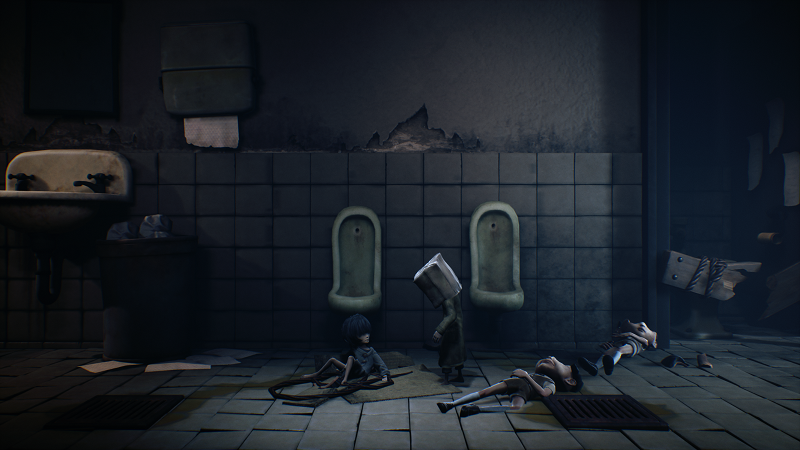 Similarly, Six’s presence ties in to the narrative of Little Nightmares II, and adds some heartfelt and somewhat melancholy beats to the experience, which compliments the horror. The story is told solely through visuals and sound, with no spoken or written words. It explores the themes of friendship, coming of age, abuse, bullying, societal norms, and several other themes that sit just right in a story about children.

One of our writers at Rely on Horror recently wrote an interesting piece that delves into the symbolism and psychology behind the Little Nightmares series. It’s worth a read for anyone wanting to understand more about the narrative and themes featured in the two games. 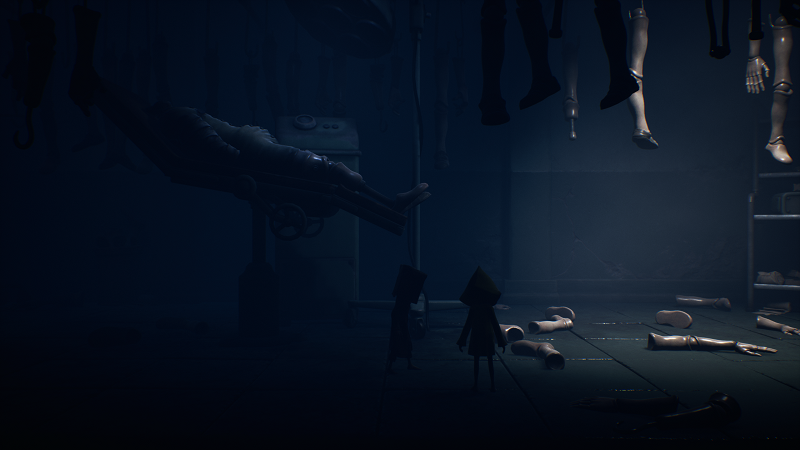 Little Nightmares II undoubtedly features some of the most breathtaking and creative horror visuals you’ll see this year, even though we’ve already got one heavy-hitting horror title in the visual department with Bloober Team’s The Medium. I took more screenshots in this game than I have in any other game recently, constantly stopping to observe the horrifying beauty.

The lighting, modeling, scale, and cinematic quality of everything you’ll see in the game is top-notch from start to finish. You’ll instantly want to turn your head away from the enemies and environments that are so skin-crawlingly detailed in their disfigured and twisted way. In contrast, specific settings or events will suck you in, and you’ll be unable to avert your gaze. Much of the time, you’ll experience both feelings at once during the same scene. This is the duality of Little Nightmares‘ visual approach. 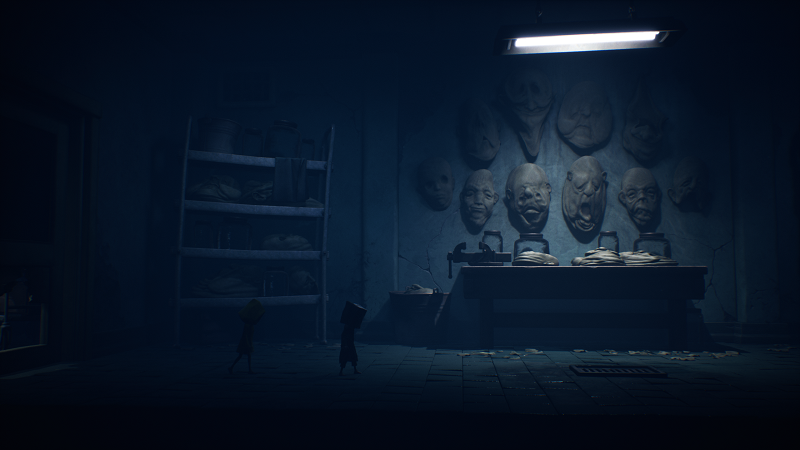 The detailed and diverse animations for every character and object in the game really sell the world you’re inhabiting, with everything feeling alive and present, whether you want it to be or not. The death animations are brutal and visceral, making you increasingly empathetic for little Mono and Six, often making you wince when you slip into an unexpected demise.

The beautiful and haunting visuals juxtaposed with the moments where I was terrified, disgusted, or running for my life, made for an absolute rollercoaster of an emotional experience. The gorgeous setpieces, the clever but simple puzzles, and the heart-pounding chase/stealth sequences are balanced perfectly. 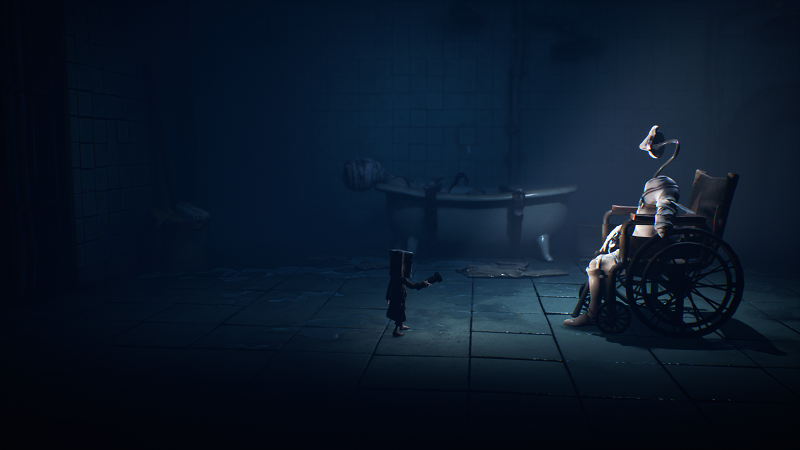 The game’s performance was excellent across the board on the Xbox Series X and even the original Xbox One console, with no framerate or visual issues to be seen. Do note that for the PlayStation and Xbox releases, at launch, Little Nightmares II is only releasing for the original Xbox One and PS4 consoles and are playable in backward compatibility mode. Optimized versions for the new consoles are due out later in the year, and will be available as a free upgrade for anyone who already owns the game.

The controls function very well, and I never struggled with getting Mono to do what was needed, once I figured out the logical path to take. The game has only a few sparse on-screen prompts to tell you what to do, as you’ll figure out the controls fairly organically as you go, and it adds to the immersion. 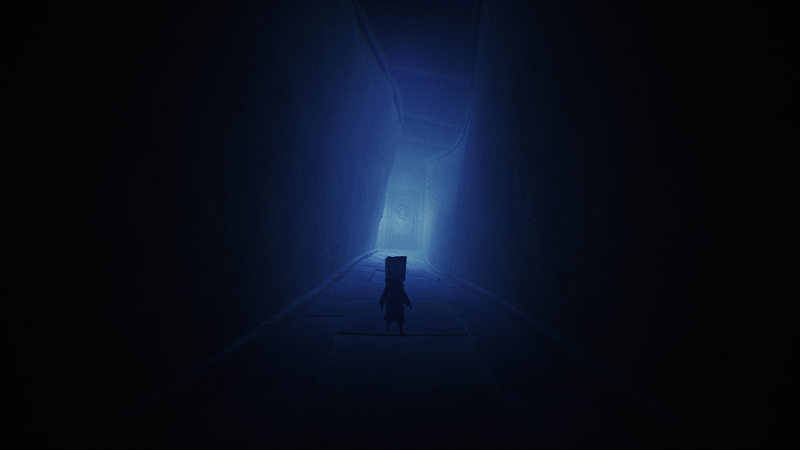 There were generally very few technical issues, besides one or two minor glitches on certain puzzles that only required a quick restart from checkpoint to fix, with no real progress lost. These issues will likely be resolved by the time the game launches to the public. While there isn’t a ton of replay value here, besides rounding up any of the collectible hats you may have missed or getting achievements/trophies you missed, the experience itself is more than worth the game’s low price.

Little Nightmares II feels like it has something for everyone to enjoy and it accomplishes this without sacrificing the quality or integrity of its design. Any horror or puzzle platformer fan should do themselves a favor and check this one out, especially for the relatively cheap price tag.

An Xbox One review code was provided by the publisher and played on Xbox Series X.