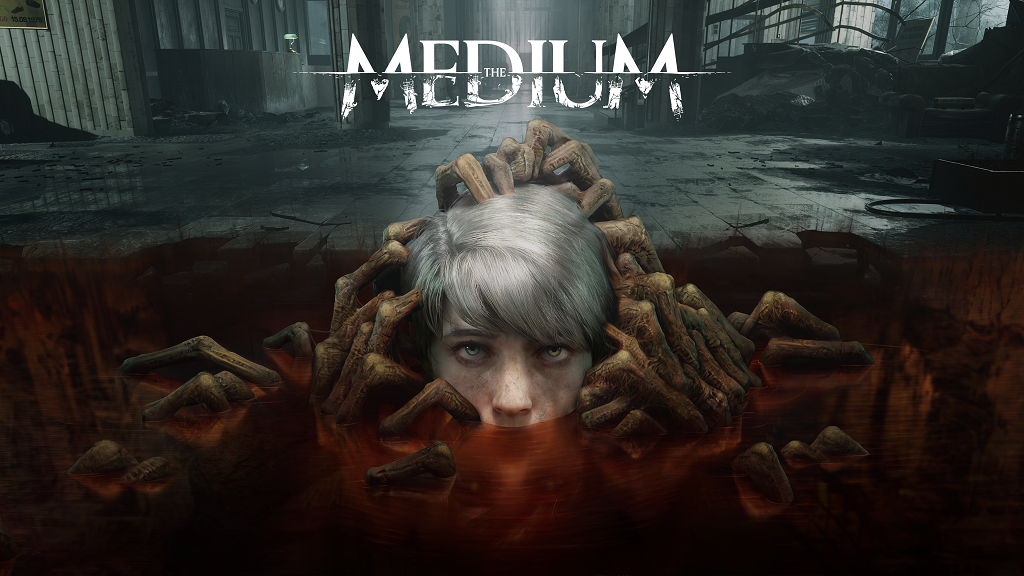 For the last five years, Bloober Team has been one of the most prominent purveyors of horror in the gaming industry. Layers of Fear set the independent Polish video game developer down a several-year-long road of horror, with a new release nearly every year, expanding upon their last and further refining their formula. But more uncompromising survival horror fans sat on the sidelines, dismissing Bloober Team’s efforts due to the studio’s continued use of a first-person camera perspective and what some would call “walking simulator” game design. Now, with a new year and console generation upon us, Bloober Team looks to the genre’s origins in order to satisfy with their latest horror release: The Medium.

Inspired by survival horror games of yesteryear, particularly Silent Hill, Bloober Team’s The Medium is a new IP that channels much from PlayStation 2-era titles of the genre. A horror first for the studio, The Medium adopts a fixed-camera perspective, allowing players to see the game’s protagonist Marianne uniquely framed in every area that she visits. There’s an extra emphasis on puzzles over Bloober Team’s previous horror titles, in addition to item searching, stealth, and enemy chase scenes. Altogether, these elements create an admirable effort to evoke a classical survival horror experience, but it’s not without some caveats. 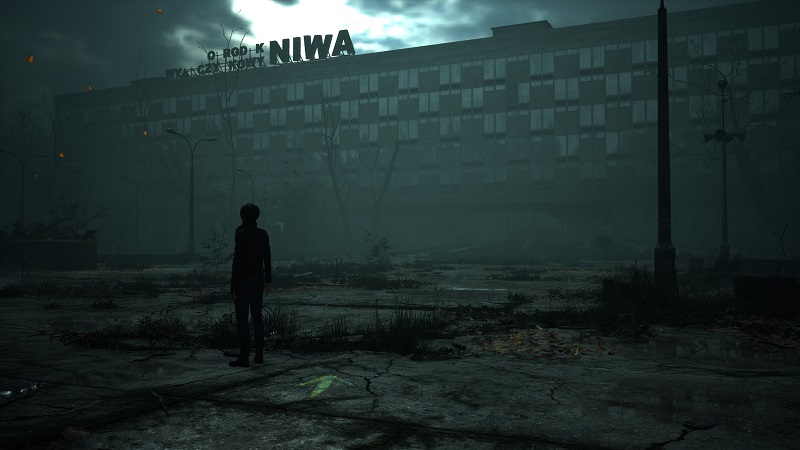 The Medium is set in the late 1990s and takes the aforementioned protagonist, Marianne, to the abandoned Niwa resort in the middle of a forest in Krakow, Poland. A man who claims to know Marianne — and what powers she holds — urges her to help him at Niwa. This journey takes Marianne to the site of a rumored massacre, which tainted Niwa and made it a hotspot for supernatural energy. As a medium, Marianne can not only communicate with spirits, but her powers also allow her to enter the spirit world either fully or exist in both worlds simultaneously. The latter ability is where the game’s — literally — trademarked feature comes in, called “dual-reality gameplay”.

Throughout her journey through Niwa, Marianne shifts between worlds to solve obstacles put before her. Occurring a handful of times throughout the game’s eight-ish hour runtime, players encounter simultaneous world views displayed as a split-screen effect. Here, Marianne’s human and spirit form traverse the two worlds, encountering varied obstacles and items that help her progress in one world or the other. To call this a gimmick would imply that it’s entirely superfluous; it’s not, but the dual-reality gameplay isn’t as impactful as the game’s marketing would want you to think. It’s used rather cleverly in some cases, and in others, it just — further — detracts from the game’s striking environment design.

Making the shift to a fixed-camera perspective is a double-edged sword given Bloober Team’s strengths. I love this studio’s horror games because of its attention to detail and excellent art direction. To me, a first-person camera perspective can improve my immersion in a game world. Being able to view things up close and from the point of view of my own eyes greatly enhances my ability to set myself in a fictional place. Bloober Team’s previous games achieved this to great effect, presenting beautifully framed horrors from a natural point of view. In the case of The Medium, that’s a bit more of a challenge due to the distance a player has from the game world. When playing a dual-reality segment, this problem is only exacerbated. Ultimately, it’s a disservice to the game’s art direction which features imagery inspired by surrealist painter Zdzisław Beksiński and high-end graphics. 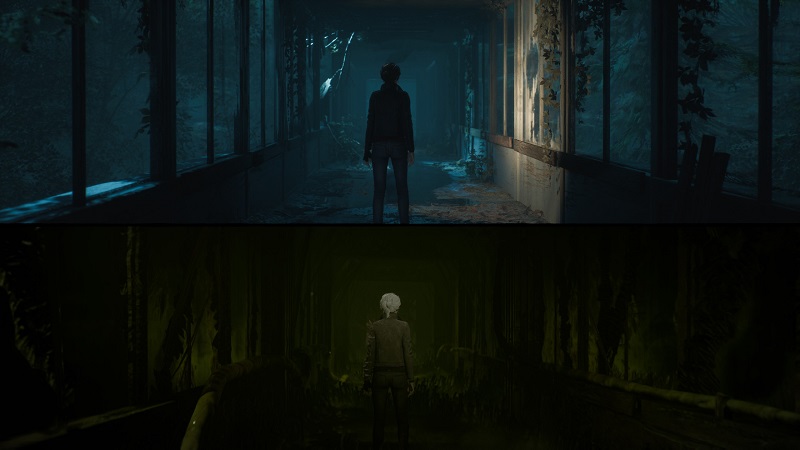 The Medium seems to struggle with balancing a classic fixed-camera perspective and modern, detail-rich environments. I make this argument simply because the game goes out of its way to put very clear markers on all relevant things in an environment that Marianne can interact with. This is enabled by default in the game settings. Turning it off for the first playthrough wouldn’t be advisable, because simple interactions are split between two buttons while movements like climbing or dropping off a ledge are tied to a third.

Exploration and progression therefore don’t feel entirely in the player’s hands. They are essentially guided through areas by being told what is a place of interest. On one hand, this can be seen as modernization of the classic survival horror formula which would require some degree of backtracking and attentiveness. On the other, it makes The Medium a fairly linear game. Puzzles themselves are not especially difficult either, with the majority amounting to “grab this item and bring it to this place”. Other obstacles require Marianne to use one or several of her spiritual abilities, such as a forcefield to protect her from swarms of moths, energy blasts to power panels, and astral projection to temporarily detach from her human form.

The remaining puzzles survival horror fans are bound to be familiar with. Though, there is one of note that requires a security code and the solution isn’t immediately obvious due to questionable logic on behalf of its designer(s). You’ll know what I’m talking about when you get to it; I and another reviewer both got stuck using a (maybe intentional) red herring code instead.

Aside from that last example, unfortunately, no puzzle in The Medium can be called memorable or clever like the kind we’d see in series like Silent Hill or Resident Evil. No abstract poems, memorization puzzles, or all that many brain twisters. That said, The Medium gets close to feeling like a game from those series when Marianne is tasked with manually switching between the real world and spirit worlds to progress past an obstacle. These segments remind me a lot of Silent Hill: Origins, with both games utilizing mirrors to trigger the switch between worlds. These segments don’t last very long, but they’re enjoyable. I would have liked to spend more time just in the spirit version of Niwa, though, to appreciate the environments.

For those in the camp who greatly prefer a fixed camera or third-person horror, The Medium’s visuals will not disappoint. The game features highly photo-realistic environments that are then mirrored by the spirit world, which covers everything in what can only be described as corrupted fauna, made from bone, flesh, and decay. The game also makes use of ray-tracing effects in select areas to create more realistic reflections and lighting, though its implementation appears to be rather conservative and the potential cause of the occasional extreme performance dip. Models for Marianne and other characters aren’t as detailed as the game world, but I can’t say that I’m all too surprised given this being the independent studio’s first non-first-person game of this scale. Observer Redux’s character models may look great, but none of those were designed to be as versatile as the characters in The Medium. 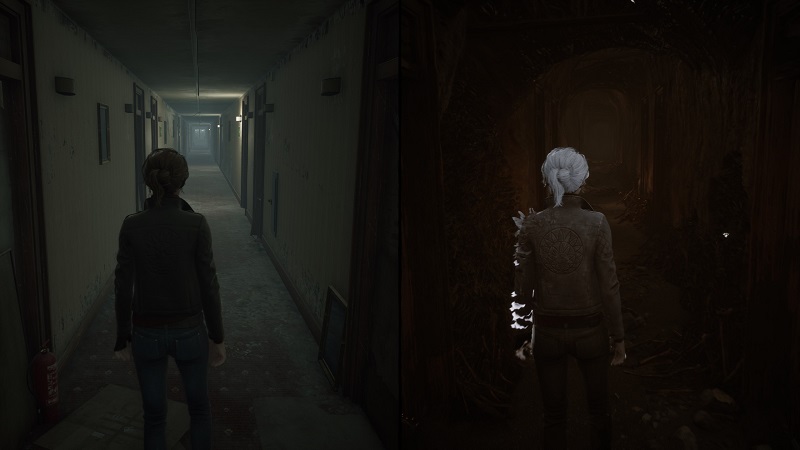 As for Niwa, the locale where the game is primarily set, it’s a visual treat. Its dilapidated halls, initially designed for luxury and relaxation, are unsettling to behold after time and rot had its way with it. Marianne can come across various notes and objects that hold memories that tell stories of the resort’s victim. References to historical events in Poland are sparse but provide some context to the foundation of the resort as well as the ideologies of some of its occupants. One couldn’t be blamed for comparing Niwa to the Overlook Hotel from Stephen King’s The Shining, as the game appears to be inspired by various works of horror (without being annoyingly overt).

The Medium wouldn’t be an homage to Silent Hill without some quality music, and it delivers. Composers Arkadiusz Reikowski (who worked on previous Bloober titles) and Akira Yamaoka (of Silent Hill fame) tackle the game’s soundtrack together, alternating between scoring scenes for both game worlds. Reikowski provides a cinematic sound that compliments the emotional beats of the game, while Yamaoka hits us with a mix of soft melodies and harsh industrial sounds akin to (but softer than) the score of the original 1999 Silent Hill. Longtime Silent Hill series vocalist Mary Elizabeth McGlynn returns as well, treating our ears with new tracks that could very well have been lifted right out of a Silent Hill soundtrack. Troy Baker, who voices the antagonist in The Medium and James Sunderland in the Silent Hill HD Collection, performs a memorable duet with McGlynn also — just as they did for the track Love Psalm in Silent Hill: Book of Memories. 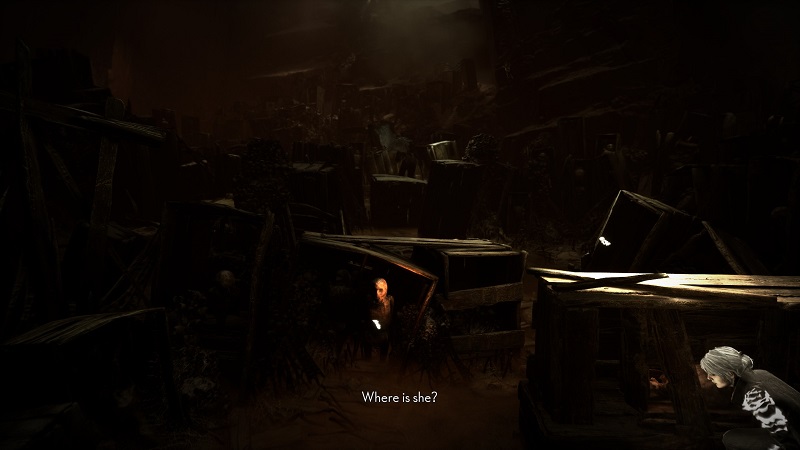 It takes a little while for the game’s story to come together, with multiple mysteries stacked upon each other. When it does, the result is fine but not especially compelling. Marianne can be a bit too jokey as she makes remarks about her situation, but I suppose that makes sense for someone who grew up seeing spirits all of the time. Though, the game also isn’t especially scary either; if anything, it falls more in line with Guillermo Del Toro’s brand of fantasy horror. The central antagonist, a demon called The Maw which has a sing-song speech pattern, provides the bulk of the game’s unsettling aspects. Scenes featuring other entities are short lived, as the story quickly introduces then moves past them once dealt with. Chase scenes involving The Maw are exciting, but the stealth segments to avoid its detection are rather simple and unfulfilling. If Bloober Team’s previous games’ shortcomings were any indication, they’re still getting the hang of how to incorporate other types of game mechanics into their style.

Launching on a new generation of consoles with the Xbox Series S|X and utilizing ray-tracing effects on console and PC, The Medium is not without a few performance oddities. Throughout my playthrough (prior to a patch released on January 25th), I encountered a few areas which saw significant dips in performance with ray-tracing enabled. And at least one area where performance halved even with ray-tracing off. A quick test after the patch confirms that these performance dips still exist, especially when the game transitions in and out of cutscenes.

The Medium has some steep system requirements to max out the graphics. Playing the game at 4K 60fps with ray-tracing and DLSS wasn’t feasible on my PC despite sporting a beefy NVIDIA RTX 3080. I also encountered just one crash, but that’s not all too alarming. One issue of note is the game’s poor implementation of HDR. In HDR mode, colors are oversaturated and and make the game look bad. 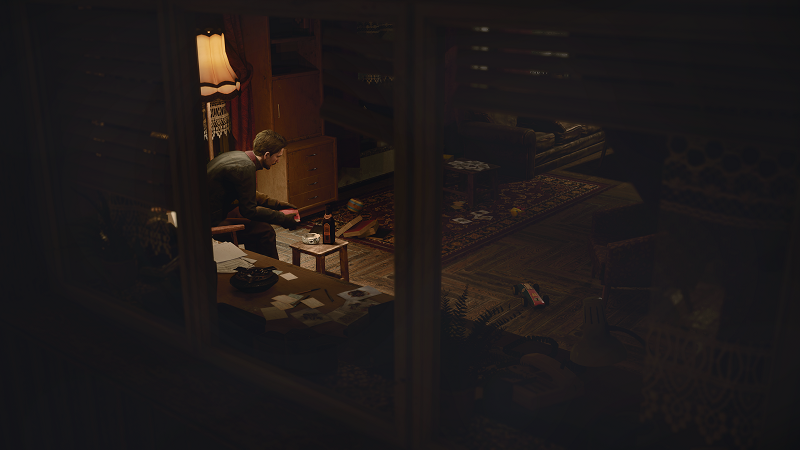 Bloober Team’s The Medium is an interesting new direction for the studio which has spent the last several years explicitly focused on the horror genre. In an effort to appeal to old school fans of the genre, it has created a game that has its share of hits and misses but also the start of a new IP that I’d like to see more of (especially given that the game’s conclusion is a very abrupt cliffhanger). In the end, The Medium‘s heart is in the right place, but it falls just short of being a truly great mashup of old and new survival horror. Having followed the growth of Bloober Team over the years, I have full confidence that the sequel will hit the mark.