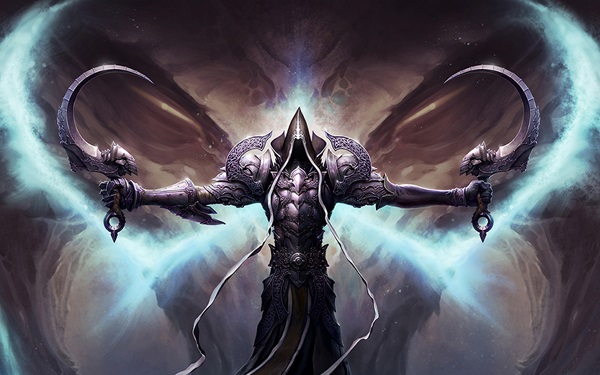 I’m a bit of a noob when it comes to the Diablo series. I’ve only experienced perhaps less than a combined hour of the first two titles, and until a short while ago, none of the third game. I’m also not a heavy PC gamer, if you couldn’t tell. However, I think that has made my enjoyment of Diablo 3 :Ultimate Evil Edition on the PS4 much better.

We previously reviewed Diablo 3, its PS3 port, and the Reaper of Souls expansion, so this micro-review will mostly touch on my thoughts of the game as a first timer and its transition from one platform to another. If you want additional details on the game or its expansion, check those reviews out. 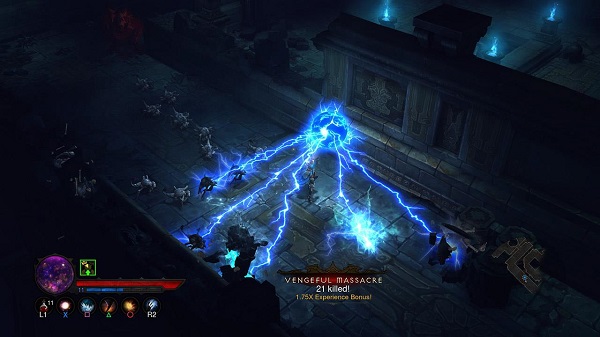 Being a console purist and knowing that Diablo is originally a PC-based series, I really wouldn’t have known that it was ported from the PC if I hadn’t been aware of it beforehand; I found the transition to be flawless. In solo play, the game is fun, but without a doubt, the option for four-player couch-co-op is the way to go. Character movement has been assigned to the analogue stick, eliminating the click-based gameplay found on PC, and it feels very natural. For friends enjoying couch co-op (up to four), there’s a small tether present keeping them together, ostensibly to make a feature like this possible; when one character becomes separated from the others by a large distance or obstacle, they are warped to their allies. Taking the game online removes the tether restriction, allowing for more freedom.

The directional pad controls the area-map, back-to-town-teleport, and a hot-key to equip recently acquired gear without interrupting the flow of the game. Even if a player needs to pause to examine gear in more detail and compare, a few visits to the equipment screen will make future gear swaps hasty. Each of the other buttons on the controller corresponds to different types of attacks as you progress in levels. At the start you’ll be mashing the X button to high heaven, which could give you the wrong impression of the game, but soon you’ll unlock an R2 technique, then a Square button one, etc. Continuing to level will unlock different attacks that you can assign to each button and even runes you can attach to that specific attack to increase its effectiveness or de-buff effects, such as slowing enemies down or stunning them.

The pursuit for new weapons and armor plays a key role keeping Diablo 3‘s replayability high (as in any self respecting RPG). In solo play, everything you see is yours. Loot drops are made for each player specifically to ensure that no one feels left out or cheated. Even if Player 1 tries to grab equipment that clearly has a Player 2 tag next to the name, the item will automatically fall into Player 2’s inventory, for example. In short time you’ll unlock a black-smith back at the hub town you can train to create more powerful weaponry and defensive items. Learning to mix and match between what hurts the most and gives you excellent buffs was key I found as time went and my levels were getting higher. An extra-powerful club for my monk had great buffs and damage, but it was slow and two-handed, eliminating the possibility for an off-hand. Optionally, I chose to equip two knuckle bracers, one on each hand, with a combine damage greater than the club and better buffs which allowed me to deal damage at a much higher pace. 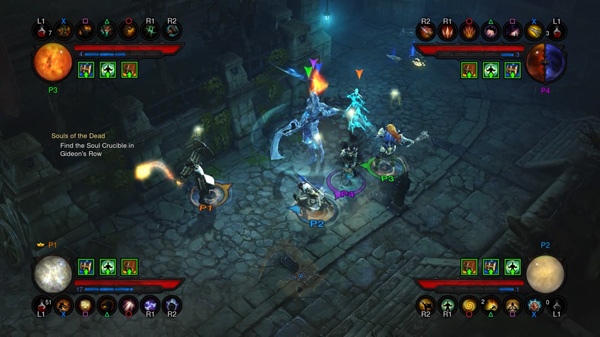 I’ve heard some people complain the game becomes a button-masher, but truthfully, I feel they simply haven’t played the harder difficulty modes. The game is set to Normal by default and you can raise the difficulty on the fly in the middle of a game once to earn more gold and experience per kill. Once my friends and I had some better gear, we increased the difficulty to our liking and found the game was no longer about hitting X as fast as you can, but coordinating our strikes so minion-spawning enemies would get stunned, hordes would be slowed, and caltrop mines could be placed to maximize damage. On top of the strategy you will have to start using, the game keeps combat with low-level enemies fresh by allowing you to build combos to gain experience multipliers, enticing you to constantly seek out new enemies to keep the combo going. Breaking some items will give you speed boosts and reveal hidden items and gold and there are switches you can attack to eliminate groups of enemies via the environment to earn bonus experience.

In terms of performance, even with hordes of enemies on screen, I’ve yet to experience frame-rate drops. The game runs a a rock solid 60 frames per second  even with four other players playing locally on the same console. Blizzard has pulled off quite a technical feat with Diablo III: Ultimate Evil Edition with regards to how it looks and performs.  It’s just shy of the PC version’s detail on maximum settings, and it’s also in 1080p. There’s enough to do in levels to have you explore the entirety of a dungeon floor or hub area before moving on without singling out a player due to a small lack of speed.

I found Diablo III: Ultimate Evil Edition to be an excellent multiplayer game to feed that grinding, experience gaining crave on consoles. Like its last-gen predecessor, Blizzard took into consideration many of the woes a console version of a PC game could have had and adapted it expertly to a controller and couch environment. With expansion Reaper of Souls wrapped into the game, content that’s not available in the last-gen version, the whole Diablo 3 experience is available on consoles in a highly functional and fun package. If our previous reviews didn’t have enough praise, then it’s worth mentioning again that this game is one worth picking up if the genre is up your alley.