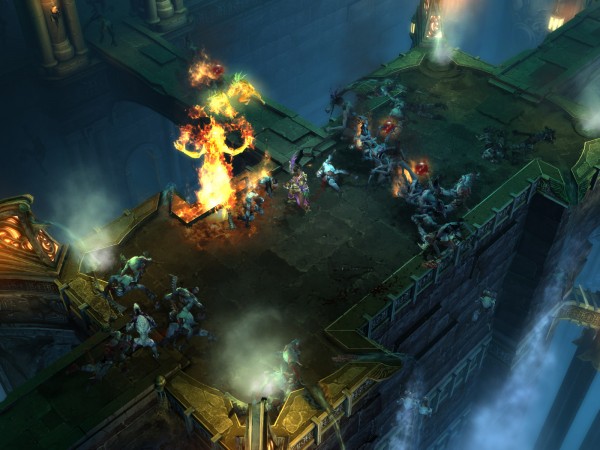 A lot of gamers are on cloud nine right now, dungeon crawling, questing and looting in euphoric glory. For far too long we have impatiently waited for this release, all while giving its predecessor the workout of a lifetime for almost twelve years.  There are very few releases in the gaming industry that draw this much attention, and for a good portion of those games it is Blizzard Entertainment that consistently produces hordes of eager people to throw their money at them with each of its releases.  From its early days with Warcraft and Warcraft II, Blizzard has created timeless gaming gems that grow in popularity with every release.  World of Warcraft changed the world of MMO gaming, Starcraft II, which released in summer of 2010, sold just under two million copies in its first day, (not counting the freebies for Korean WoW players), and just days ago Diablo III had millions standing in lines for hours in various after-hours stores before its midnight launch on May 15th, exchanging stories of their (digital) travels in the dark, vast, fictional world of Sanctuary.  The much anticipated third installment in the Diablo saga is available now. 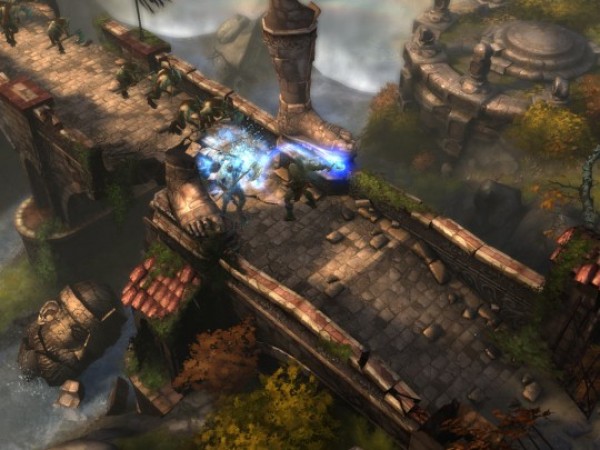 For me personally there are very few games I choose to purchase on launch date; I have a strict and opinionated view on almost everything in life and you can be sure that includes which games I do or do not spend my hard-earned dollars on.  Diablo’s influence on the gaming community is undeniable – with its genre-defining gameplay, score and story. So for a lot of people out there this installment brings us back to 1996 when we first picked up the series and began experiencing its demon-hunting glory.  For a more in-depth look at the first two titles, see my two-part Diablo Retrospective here and here.

When sequels release, everyone wants to know what’s new, what’s improved and what has been scrapped. The biggest thing right off the bat is feeling at home when you first get to control your character, and Diablo III picks up where we left off in the first two games.  The controls feel incredibly familiar, yet also slightly enhanced to accommodate the game’s new features; it also continues to use the isometric, bird-eye view that the series is known for.  Graphically, the game has taken a leap forward, (as expected) although there have been complaints about its cartoony models over more realistic ones.  Along with the improved graphics is a new physics system that is speckled about the game to provide a more interactive environment. Frequent breaking of wooden barriers is necessary to continue your journey in certain areas.  Unlocking chandelier chains drops the light fixtures onto unsuspecting demons feasting on a poor soul, and breaking pots and barrels has never been as satisfying, bashing them to pieces that fly in every direction.

In addition to this, combat has become a little more involved; where previously we were tasked with simply destroying monsters before they destroyed you, we are given invisible mini-games that earn you bonus experience depending on how well you perform.  For example, if you enter combat and knock out a horde of enemies fast enough and without much delay in between enemies, you will earn extra experience for destroying the monsters in this timeframe, (basically when you enter combat to when you end it, if it’s fast enough).  Another fun thing is to see how many enemies you can kill with one blow.  Both of these perks will alert you when you’ve done so, making it just that much more fun.

Another ‘perk’ is the gore.  I don’t usually comment on a game’s maturity content unless it leaves a mark, and in this case it leaves plenty of marks.  Blood has always been a part of Diablo, but this experience had me laughing audibly to the rest of the house when I bashed the first enemy of the game with my barbarian, an act which shook the screen, splattered the ground with crimson and sent the newly deceased demon flying across the visible field.  If anything, the fighting is beefier and more satisfying than ever before with its chunky hits, colorful attacks and impact sound effects. 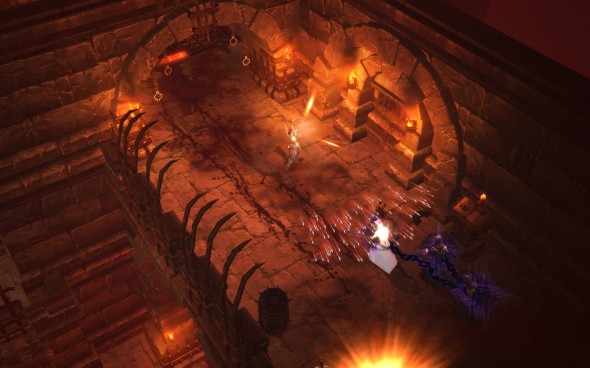 The skill trees look a bit different and some may complain they’re a little linear.  Levels divide the skills into tiers.  The higher your level, the more skills become available.  Diablo II had us assigning one skill point per level to whatever skill we wanted in a pattern of our choosing -this is similar, but it has its restrictions.  Much to my surprise, assigning five points per level to vitality, strength, stamina, etc. has been removed as well.  Runes have been added to the skill trees to give your selected abilities a little more bang for their buck and they add a different level of customization to aid not only you, but anyone you may be traveling with as well.

Questing and experience earning is a little more prominent than in the other titles.  You can seek out people and missions to complete rather than them only being part of the main story.  Upon completion of these missions, you earn gold and experience, et cetera, et cetera.  There are also a bunch of books strewn about Sanctuary for you to pick up and listen to their dialogue, which will grant you bonus experience points.

With the good however comes a new and -at best- disappointing feature which has been nothing but a nuisance to me thus far: the incorporation of online-only gameplay.  No, it does not force you to be in a game with other players, but it does require an internet connection to play.  Call me a purist, but it’s proven to be a huge hassle given the fact that so many players have been accessing the servers at the same time, that they continuously crash and/or Blizzard is performing necessary maintenance, which prevents anyone from playing for hours at a time.  I understand the server crashing will subside and the necessary maintenance timeframes will become few and far between, but for a game that has such a huge following, it seems unfair to keep us from playing – especially when we had put up with Blizzard’s tedious release delays and broken promises for so long. This is simply a poor development decision. Is it so much to ask to be able to play the game whenever I want? This is inexcusable

To be honest, after dissecting this game I cannot find much else to complain about.  The combat and questing is just as satisfying as ever before, although the dungeons seem pretty linear.  Connecting with buddies and plowing through countless enemies still rings true and you will easily lose track of time.  With so much to look forward to in this release, I wanted to take some time to talk about the collector’s edition, which is phenomenal.  As stated previously, Blizzard takes pride in each and every release and if you didn’t play this game, the collector’s edition would undoubtedly stand out among the best ever released.  Let’s take a look at its components. 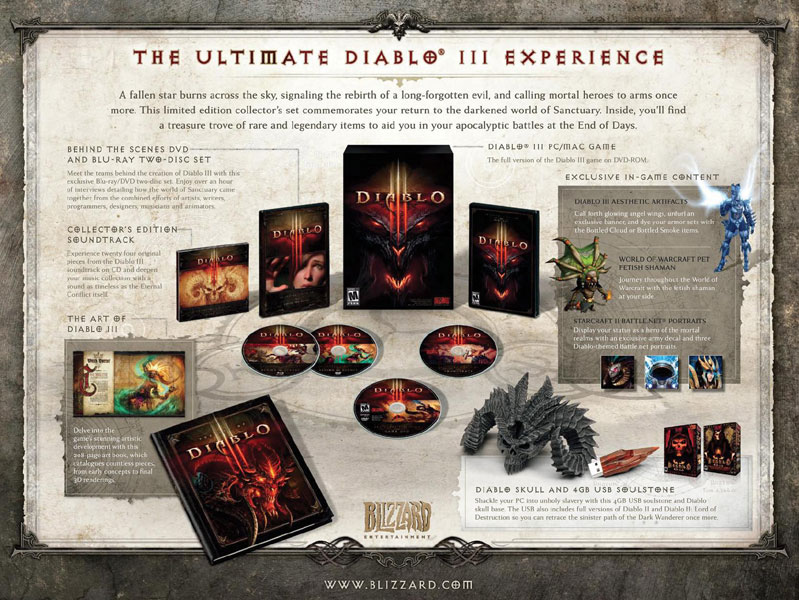 As you can see, there’s a lot to it, which makes its $100 price tag seem like a steal.  The set comes with the game (of course), a bonus behind-the-scenes DVD, complete soundtrack with individual packaging and booklet, a full-length hardcover book of artwork for the game, online passes for WoW and some passes for your friends to try Diablo III, a 4 gigabyte flash drive which includes Diablo II and its expansion pack, Lord of Destruction with a Diablo skull ornament to hold it – all cased in its own intricate box and to top it all off, a beautiful white package to hold it all.  This is easily one of the best collector’s editions I’ve ever purchased.

Diablo III delivers on all fronts.  If Blizzard could keep the servers up without those unrelenting errors, the fans would have little to complain about other than personal preferences. From the incredible and beautiful opening movie to the nostalgic and immersive gameplay, old and new fans alike will have to pick up this game and bring their dungeon-crawling parties into the new age.  It’s always fun to revisit the Diablo universe and this outing is no exception.  In short: BUY THIS GAME.