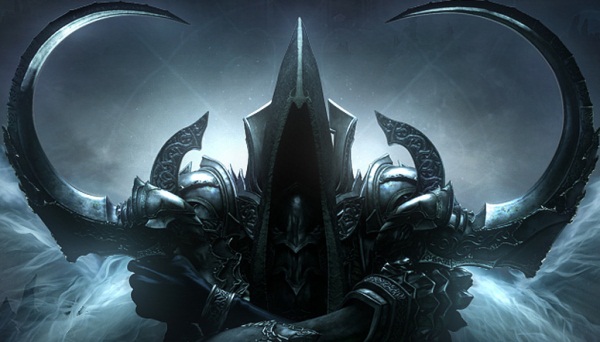 It was once said that if a developer released a bad game, it would be forever considered a bad game until the end of time. However this is hardly the case in the age of where games can be easily modified, patched, and improved upon. Diablo 3:  Reaper Of Souls in particular is one such a game that looks to challenge that notion. It’s no secret that Diablo 3 didn’t live up to the expectations fans had of the franchise when it was initially released back in 2012 for a variety of reasons. The story was incredibly predictable and downright goofy throughout its four chapters. The persistent internet connection requirement plagued the game to the point where it gave birth to its own internet meme. Finally, the auction house forced players to battle each other out in online bidding wars, rather than take the fight to the legions of hell. Blizzard acknowledged there were a lot of issues with the game, and promised that they would fix it. So now that the Reaper Of Souls expansion is now within our grasp, did Blizzard keep their word?

Reaper Of Souls takes place immediately following the defeat of Diablo himself at the end of Diablo 3. The world of Sanctuary can breath a sigh of relief that the Lord Of Terror (Diablo) has been defeated and that his spirit is now locked away within the chaotic prison that is the black soulstone. Unfortunately, a new evil has emerged in his place. The archangel of death, Malthael, now threatens the people of Sanctuary, and wants to claim the black soulstone’s evil power all for himself.  Malthael’s plan is to use the stone to eradicate both demons and humans forever, bringing an end to the eternal conflict between good and evil. It’s now up to you, the Nephalem, to stop Malthael before he accomplishes his goal.

As you can tell, this is pretty much just every stereotypical fantasy story plot ever made. Diablo 3‘s writing was heavily critiqued when it was released for being very poor, and unfortunately Reaper Of Souls has not improved on its predecessor in that regard. It’s one fantasy trope and predictable character action after the other, and never will it subvert your expectations. It’s quite a shame that a developer with the resources Blizzard has makes little to no effort when it comes to improving the writing in their games. Thankfully though, for most people the story is the last thing they care about when playing an action RPG. 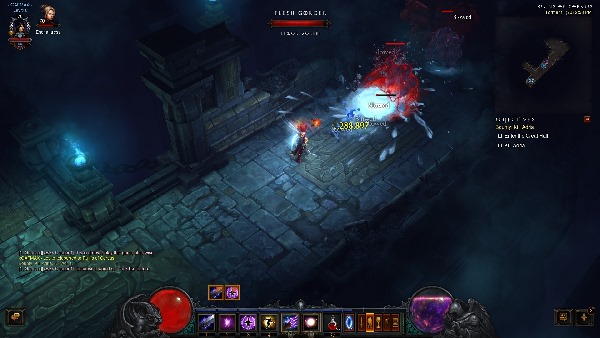 Your journey to bring about an end to Malthael’s shenanigans will lead you to the lands of Westmarch. It’s here that the new Act V takes place, and I enjoyed it far more than what was in the previous four Acts due to its new hellish environments. Westmarch has a Gothic look to it that’s more in tune with the art direction of the first two Diablo games. It’s safe to say that any semblance of the brighter color pallets utilized in the earlier Acts  meets an untimely demise at the hands of Malthael. I wasn’t one of the vocal fans that lambasted Diablo 3‘s art direction upon it’s reveal, but I also wasn’t really in favor of the World Of WarCraft-like visuals. With Reaper Of Souls, Blizzard has attempted to appease those fans that favored the more Gothic and menacing art direction of Diablo 1 and Diablo 2. It may still be a far cry from those games, but at least they took the fan criticism regarding the art direction to heart.

Art direction aside, Westmarch is simply a far more interesting place to explore than what was previously offered. Whether you’re making your way through the demon infested commons, or taking in the ravaged landscape in the Battlefields of Eternity, everything feels so much more rich in Act V. If it wasn’t for several new systems encouraging you to go back to the other four acts, I would never take my character out of Westmarch. 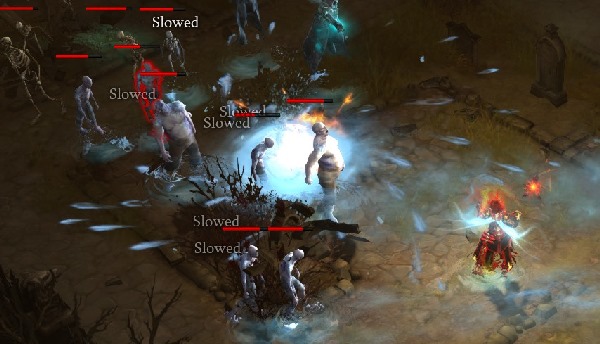 Perhaps the most well-received new feature of Reaper Of Souls is adventure mode. In this mode, players are free to explore all five Acts in the game without trudging their way through Diablo 3‘s nauseating story. Basically, there will be bounties put up in every Act both for killing monsters and completing various tasks. After completing five of these bounties, you’ll receive a collection of goodies from one of the merchants in the game.  Not only that, but you’ll also slowly but surely receive rift keystone fragments, which will give you the ability to open up Nephalem Rifts in the game. Nephalem Rifts are big randomly generated dungeons that further spice up the hunting for good loot. Once you start a Nephalem Rift, a progress bar will appear on screen and fill up as you kill monsters. Once that bar is completely full, a special type of monster called a “Rift guardian” will emerge that you’ll have to defeat before the Rift can be closed. Tackling bounties and Nephalem Rifts are now the brunt of the gameplay, helping to build up gear, money, paragon levels, and skills once you’ve reached the endgame. Blizzard has even reworked how difficulties work  in Reaper of Souls to better accommodate adventure mode too. Previously you had to complete the game on Normal difficult in order to get to the nightmare difficulty so on and so forth until you reached Inferno difficulty. Difficulty is now adjustable from the start when when creating a game, and you’ll receive various perks the higher you set the difficulty. It’s an incredibly addictive system that will surely keep you playing far longer than you might have intended in any given play session. It should be noted though that you must complete Act V via the story mode at least once before adventure mode is unlocked.

Back when the console version of Diablo 3 came out, I mentioned in my review that arguably the biggest problem with the original PC release of the game was the auction house. More specifically the fact that Blizzard intentionally designed the game so that players had to spend either gold or real money to acquire the gear required in order to progress on the harder difficulties. Well since launch, Blizzard has learned their lesson and removed both the gold and real money auction houses. Not only that, but they’ve introduced what’s called “Loot 2.0” which is basically an entire reworking of itemization and drop rates. Now from the very outset of your adventures, you’ll be finding good loot at a consistent pace. Not only that, but the items in and of themselves have become more interesting in terms of unique stat bonuses and attributes. For example, I obtained a legendary ring called “Puzzle Ring” that had a unique bonus where a small treasure goblin would follow me around. Though to say he just follows me around would be a disservice, because there’s more to it than that. Whenever a grey or white item would drop, the treasure goblin runs up to collect them, and after he’s collected 12 items, he’ll drop a rare or legendary item–too cool! My only real complaint with loot 2.0 is that there’s still not quite enough fun  item bonuses like my little goblin friend. Most of the time, you’re still just number crunching and comparing stats to figure out what times work best for your character. 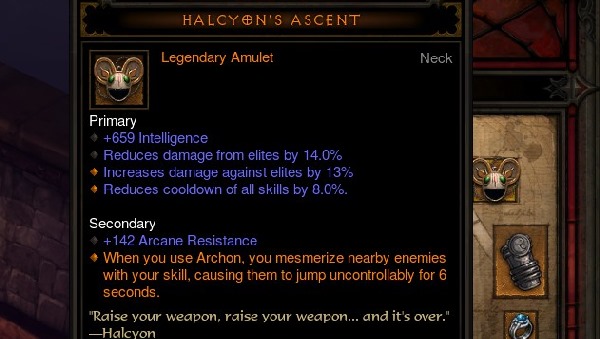 Though in actuality you’ll be doing very little in the way of actual number crunching, as they’ve added the smart loot system. Which makes it so nearly all items that drop will be usable and beneficial to your character. Smart loot is an interesting addition, but I feel it takes away from the game in a couple regards. For example, it makes collecting extra gear for your new characters practically impossible because the majority of the items that drop will only be relevent to the class you were using when the item itself dropped. So if I start a new Crusader, I can’t really look for equipment for him on my Wizard because the majority of items that my Wizard finds will be items only usable by the Wizard class.

Speaking of classes, Reaper Of Souls has added The Crusader to the entourage of  playable classes in the game. The Crusader is more or less a throwback to the Paladin class from Diablo 2 in terms of how they play. Crusaders combine explosive sword and mace based physical attacks with holy magic to lay waste to their foes. Most of their spells are mid-ranged attacks that have a good synergy with melee attacks, so there’s a good rhythm to battle with this class. They’ve also got some threat generating spells that force enemies to focus on them, as well as some abilities that allow them to mitigate enemy damage. This basically makes them a tanking class, and it’s a big help when taking on really tough bosses. 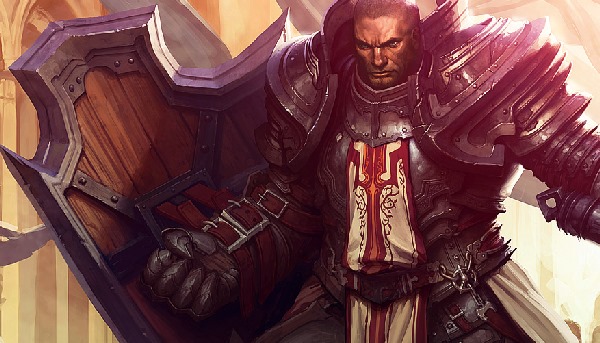 Reaper of Souls by no means fixes every single problem that fans and critics have had with Diablo 3. The story is still dreadful, the PVP modes are still nowhere to be seen, and there’s still no means of playing the game in an offline or LAN setting despite. All the same though,  it’s a big step in the right direction, and you can really tell Blizzard is well aware of the mistakes made on the original release in 2012. Reaper of Souls is the game Diablo 3 should have been from the very beginning, and it proves once and for all that a bad game does not have to remain one until the end of time.