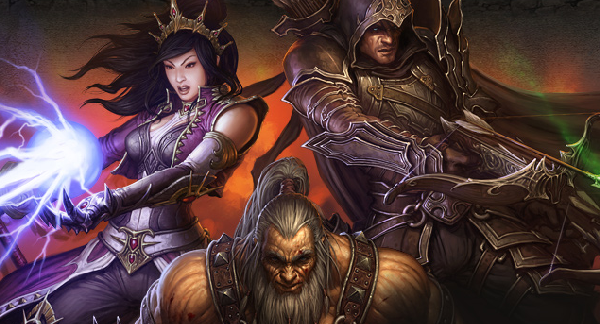 Diablo 3 is one of the most talked about games in recent times for unfortunately for all the wrong reasons. It suffered from a terribly unstable launch, giving birth to the now infamous “Error 37” meme. The auction house took players away from exploring dungeons to scrolling through online listings. The writing was massive step backwards from its predecessor and featured nothing but cringe worthy dialog. With the mandatory persistent internet connection ruining so many players’ experience, it now serves as a lesson to the games industry that always online DRM is not the way to go. There was a whole myriad of problems, some of which – like the DRM – can’t be fixed on the PC side of things now. However the console port of the game takes heavy strides to try and remedy most of these issues, and for the most part it succeeds.

Now I’m not really going to get into the intricacies of the skill trees or touch on the story as we already have a Diablo 3 review for that. While I may not share the same feelings as what is expressed in that review, it’s worth a read all the same. My review of the console version is going to focus on the quality of the port, the differences between the two versions of the game, and the ways in which the console version is superior to its PC counterpart.

One of the most iconic things about the Diablo series has been the insistent clicking. For those of us that have been with the series since the beginning, it’s hard to imagine playing the series comfortably any other way. Amazingly though, Blizzard really pulled off a control scheme that works phenomenally well on a controller. One that not only functions just as well as a mouse and keyboard setup, but in some ways surpasses the PC controls. Trust me, I wouldn’t say that if I really didn’t mean it. 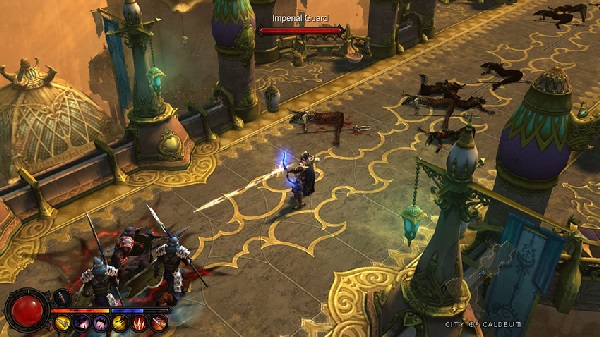 It’s important to note that I played the PS3 version of the game, and from here on out I’ll be addressing everything with the Dualshock 3 controller in mind. So let’s break down the controls a bit, basically all directional input is handled by the left thumbstick. Your character is fully receptive to analog control, and will adjust their movement speed depending on how intensely you push on the thumbstick. It works well with the isometric camera of Diablo 3, and in this release your character is not dead locked in the center of the screen as it is with the PC version. There’s a bit of a give depending on the direction you’re going. For example, if you want to move south, you need to push the left thumbstick downwards and your character will move downwards freely for about a second before the camera starts actually following them. I think that bit of give is to ease you into when you’re playing local co-op, where there are 4 on screen and the camera is keeping you all within a certain radius as it hovers above.

On to probably the finer elements of the controls, and that’s how attacks are mapped to the controller and how combat is handled. All of your abilities are mapped to the face and shoulder buttons. You’ll start off with just your basic attack being mapped to the X button, and the game slowly eases you into the rest as you level up. That is to say as you gain levels and get access to new abilities, at certain levels the option to map your attacks will open up. In the beginning for instance you won’t be able to use the triangle button for attacks, but in just a few levels it’ll open up to customization for you. It’s a really great way of easing you into the control scheme and not overwhelming the player, while also integrating it into the natural skill acquisition and level progression of the game.

My favorite aspect of the console controls though is the new dodge mechanic. A directional dodge move is now mapped to the right thumbstick, and it functions exactly like the dodging ability found in the God Of War franchise. Say for example a demon is about to charge at you from the right end of the screen. In the PC version you would have to click in a direction to run out of the way.  It sounds like a small feature, but it enormously expands upon the depth of Diablo 3‘s combat and is a natural fit. It feels like it should’ve been there all along honestly and it would be hard to go back to the PC version where the dodging/rolling is not present. 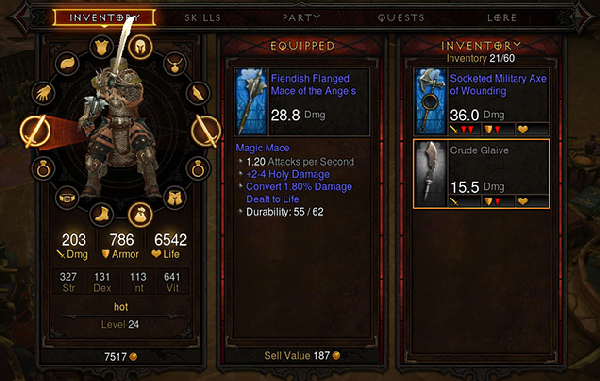 Inventory management is yet another staple of the Diablo franchise that I always thought would be a nightmare dealing with it on console. Yet again however, the developers have really made it easy to manage on a controller. Firstly, all equipment is managed via a circular item wheel, as seen in the above screenshot. You simply select something like say, your mainhand weapon item slot and then poke through your inventory for a suitable armament. Everything that can be equipped in that particular item slot will appear in an inventory bar directly to the right. So going with the weapon item slot example, all weapons my class can equip will appear in the aforementioned bar. You can even directly compare your already equipped items with potential replacements. Another bar to the right of your inventory bar will highlight what you currently have equipped, making item comparison quite easy.

Skills and the runes are also easy to manage in the console version. It’s actually pretty much the same as it is on the PC only you select skills and runes via the D-pad rather than using a mouse. You can map certain skills to certain buttons, however there are limitations. I played as a demon hunter, and my rapid fire ability was only mappable to the Dualshock 3’s R2 trigger. You can’t remap every skill to any button you’d like. However the button presets for each skill always felt really comfortable and I never struggled with it.

There isn’t really any big differences with the actual game itself in terms of content. The story is just as cringe worthy as ever, not that you should expect that to be any different. All the environments, monsters, and boss encounters are just as they were in the PC version. The only big difference I can recall is the Act 2 finale boss fight with Belial. Blizzard changed the perspective from an isometric camera to something more on ground level and facing the boss. So those of you looking for new content in this version will be disappointed.

Although the console port adds several difficulty options that are readily available from the get go. When you start a new character, you now have the option to choose easy, normal, hard, and several other difficulty tiers as time goes on. Note though that these are independent from the natural progression difficulty of  Nightmare, Hell, and Inferno. The new difficulties are probably there because most people found normal difficulty in Diablo 3 way too easy. The initial 3 difficulties available to you do not affect experience gained or chances for rarer items – they’re literally just there to make the game more difficult if you desire. Personally I think this is a wonderful addition, because normal difficulty does not provide a sufficient challenge.

From a visual and presentation standpoint, Diablo 3 shines brightly on console. You aren’t going to get the ridiculously high resolutions or texture quality that you would on PC, but that’s to be expected. The framerate runs at a crisp 60 frames per second at nearly all times. It drops on occasion but it generally only happens in the later acts where there’s massive hordes of monsters and even in those instances it’s never all that bad. 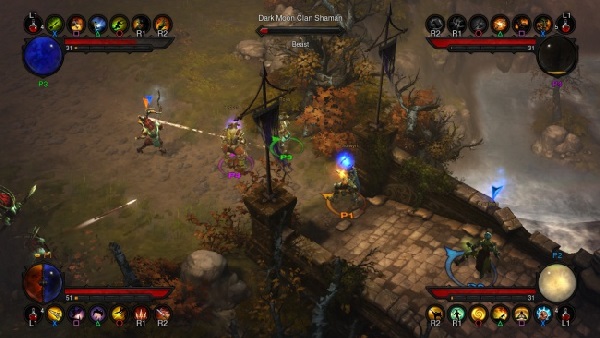 Multiplayer and co-op where the heart of the game is. Despite my general distaste for Diablo 3‘s campaign, I’d be lying if I said I didn’t enjoy the game in a couch co-op environment. Four player local co-op functions really well, with the only drawback being that you have to take turns managing your inventory/skills with friends. So a little bit of coordination is required from all players to share the screen to equip new skills and loot. Online multiplayer is not bound to such screen limitations however. The netcode for this game is outstanding; joining public lobbies and groups is really fast and I rarely encountered any lag. The PC version of Diablo 3 was bound to a client/server infrastructure,  meaning all of your characters were stored server side and were inaccessible without logging into battle.net. So if you had no Internet connection, you could not play the game at all (always online DRM). The console version, thankfully does away with all that, favoring a peer to peer infrastructure with characters all being stored locally on your console. Basically you can play your characters in an offline setting all you want. There’s even LAN compatibility, which shouldn’t be touted as a feature, but it wasn’t in the PC version. Error 37 thankfully has stayed a PC exclusive feature!

You’re probably well aware of this, but the real money and gold auction houses present in the PC version is not in the console versions. Let me tell you, that’s absolutely wonderful. The auction house was the root of nearly every issue that plagued the PC version. Always online requirement? That was there to make sure people were online and help push the real money auction house into players’ eyes. Extremely limited drops for good loot? That was there to encourage players to go spend money in the real money auction house for good loot. That auction house ruined most of Diablo 3 on PC, and removing it entirely from the console version is a total blessing. Now that it’s gone you can happily play offline and even find legendary items. The drop chance for rare items is far more reasonable now; you can find great stuff easily without spending any money. It’s a far more balanced experience for adventurers and searchers of the finest wares the hordes of hell can provide. 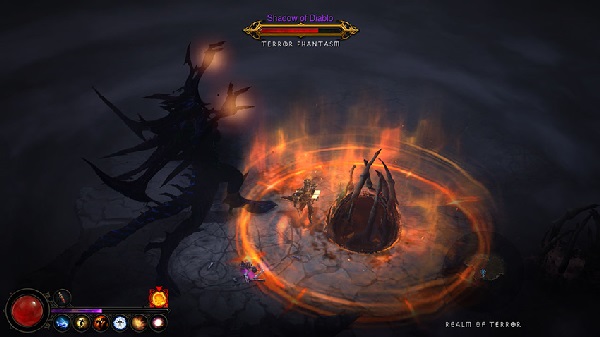 My time with the console version of Diablo 3 has been an interesting one. It was a reflective experience first and foremost. No matter what I was doing I kept thinking back to the release of the PC version. How it was such an utterly broken mess in nearly every regard and how it really didn’t live up to the standards set in place by Diablo 2. With the console version many of the larger issues are gone and that’s great. I still feel though that for me personally that the base game is still a disappointment for a whole slew of reasons that I won’t bore you with. For those of you looking for a great  co-op experience though, you can’t do much better than the console version of Diablo 3.