Because We Missed It Reviews: Dead by Daylight Mobile 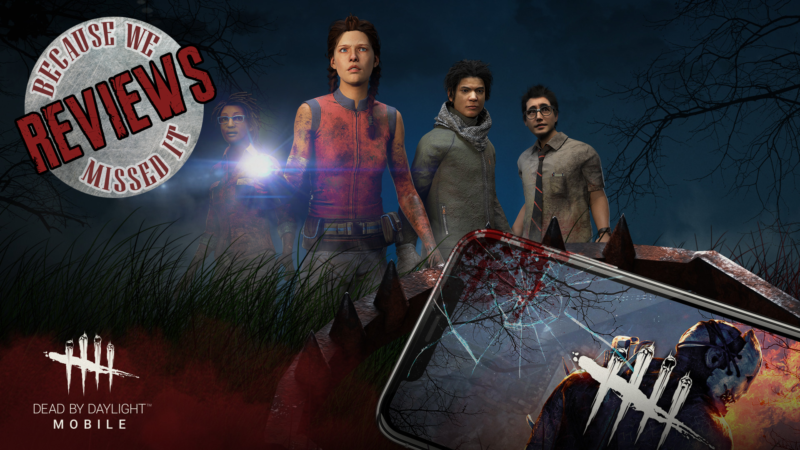 Hello there, and welcome to a new series of reviews called ‘Because We Missed It’, where we take a look at some older games we just never got around to covering when they released. Why? Because quite a few of these are worth talking about, even years later — starting with Dead by Daylight Mobile! One area we’ve never been able to give as much coverage to as we’d like here on Rely is mobile gaming. I’ve always been interested in it, but personally never owned a phone capable of running much beyond Plague Inc. and Pokemon Go at 12fps. Recently I was able to upgrade to a shiny new mobile device, and gain access to the entire suite of mobile games (that Apple will allow on their marketplace). One of the first things I did was jump at the opportunity to finally take a bite out of all the mobile horror games I’d missed over the years, and boy did I find a treasure trove. Unfortunately, many of the titles I’d always wanted to try are no longer available (RE4 Mobile Edition, Resident Evil: Degeneration, Dead Space Mobile), but those games are pretty ancient at this point.

Regardless of heartbreak over older games, I am overjoyed to finally join in on the more modern side of things — and I am planning to cover what I can from this scene, and since it’s free I figured this is a good place to start. I’ve covered the main version of this game several times on our site already, with the Xbox One version typically being my platform of choice (although I also own it on Switch and PC). I have to say, I have been pleasantly surprised at how well the game makes the transition.

To start off with, the game is completely free — from the word go all you need to do is download and launch the game. Considering the game’s asking price of $30 on every other platform, I was expecting at least a $5 charge, but instead, they’ve opted for a 100% free to play monetization scheme. I should be upfront and say that I never will buy into any free to play monetization, I don’t feel compelled to spend any more than free on a free game unless it’s for more game (more chapters for Ace Attorney: Investigations, as an example) especially when it amounts to things like characters and costumes. I’ve already been over my disdain for the microtransactions (or macrotransaction after a certain point) in the main game, but I’ll admit that if all versions of Dead by Daylight switched over to a free to play model I’d be a lot more comfortable with it.

As part of that new monetization plan, there are now ads — but you can completely avoid ’em as far as I can tell. The Bloodweb of the main game has been replaced by the ‘Blood Market’, which works more or less the same (although you seem to get a tremendous amount more Bloodpoints to spend). Characters all seem somewhat cheaper than their console counterparts, and you can actually earn the premium currency (which must be paid for on every other platform) by completing daily and weekly challenges. All the killers and cosmetics are here as well, save for the Silent Hill DLC, which most likely requires extra fine-tuning thanks to special controls.

Playing as my main (before Cheryl Mason and the Silent Hill DLC released on other platforms), Meg Thomas, I instantly fell back into my groove with Dead by Daylight — the gameplay loop and metagame roll out exactly the same here as they do everywhere else. Maps aren’t hacked up or shrunk (at least from what I could tell), and every item and ability is here. Objectives remain the same, and all the characters play just like they do on the other platforms. The main differences found in Dead by Daylight Mobile are the introduction of adjusted controls and new features to make up for the possibility of playing without audio.

Dead by Daylight Mobile does not feature controller support, most likely to make sure everyone is on an equal playing field, and changes had to be made to accommodate for this. All of Dead by Daylight‘s gameplay functions are present, but the input has been totally redesigned and in some cases the gist of the function has been modified. Where you previously had to hold down a button to repair a generator, for instance, you now merely need to tap the repair icon (or repair with toolbox when available) and your character will begin working without the need to hold anything down. The same goes for healing yourself and others, as well as destroying totems and sabotaging hooks. It’s a nice quality of life change that makes gameplay smoother than I was expecting.

Don’t go kidding yourself though, the challenge is still very much present and the QTE ‘skill checks’ are still a major function of repairing generators and healing. Because of your phone’s obvious lack of screen space, the skill check icon has been redesigned into something more akin to BioShock 2‘s hacking minigame, where a bar will appear and you have but a second or so to react in time to clear the QTE by tapping an icon to the side of the bar — lest you fail and cause a generator to crackle with sparks and noise, drawing the killer’s attention. I’ve found these significantly more challenging than the original version, although it may be due to being unused to the new design. That said, other players seem to fuck it up just as frequently, so maybe it’s a more general experience than I thought.

Other controls had to be adapted as well, most noticeably movement. For survivors, walking and running are controlled by sliding your finger on the bottom left of the screen and turning the camera is done the same on the right side, while crouching and interacting is operated by icons on the right side. Crouching, just like repairing/healing, is a toggle rather than holding anything down, but along with that, you can also toggle running. As the benefits of multi-stick gaming are somewhat lost via this design, you can pull and hold (it says flick in the tutorial, but I’ve found this way works better) to lock into a sprint. You can then let go of the left ‘stick’ completely, and navigate via the camera without having to worry about accidentally slowing down because your finger slipped. The same goes for the killer, although now with the added benefit of a pretty harsh lock-on system. I was rather surprised at how hard the lock-on holds, perhaps even to a somewhat unfair degree, but then again the Survivor player has more freedom of movement thanks to this. It’s a double-edged sword, I suppose.

Beyond those movement changes, new visual cues have been added for players who are perhaps Surviving or Killing in public and don’t want to alarm others with the sounds of screams and panicked heartbeats. Dead by Daylight is a very sound-oriented game, and as such it’s the only multiplayer game I play where I actually leave the audio up. When playing other games (like Gears 5 or Resident Evil: Resistance) I often mute the TV and listen to a podcast or something, but Dead by Daylight requires your full attention. Playing without sound is a great way to speed through matches via loss. So to make up for that, Behavior Interactive has added in new visual elements to signify the (potentially) missing sound effects. The heartbeat is now accompanied by a visual heartbeat in your Survivor’s chest, racing as the Killer gets closer. Generators being worked on now have a small indicator that fades in as you get closer, as well, and the same goes for lockers opening and closing. There’s even an indication when a skill check is about to begin, as the icon you’re required to tap appears for a moment, timing the second or so before the skill check itself appears. These small touches help the game a lot, even though all the normal audio elements are still here for when you’re playing with the sound on.

The last real note are the visuals — which translate surprisingly well. When Dead by Daylight Mobile was first announced, I’d joked that I couldn’t see how a game that (at the time, it’s since been patched and runs much better) struggles on console would run on a mobile device. To my surprise, it looks pretty great. It doesn’t look as good as consoles and PC obviously — many visual elements (the corn stalks in Coldwind Farm for instance) have been noticeably scaled back in that sort of “potato mode” way, but character models are all nicely detailed and retain everything from their beefier hardware cousins. I should reiterate how unfamiliar I am with mobile gaming of course — I very much wasn’t aware that mobile gaming has come as far as it has. Last I checked in, mobile games were barely beyond PS1 visuals at the very best. Yeah I’m old and haven’t been plugged into this sort of thing, so maybe I’m more impressed than I should be, but damn nonetheless.

As far as actual performance goes, I’m again shocked to find that it runs significantly better than it does on Xbox One, capable of locking at 60fps if you switch it on. Its console counterparts do (apparently) run at 60 as well, but they stutter all over the place. I’ve not found that here to be the case yet, even with all players on screen at once. Of course, it should be noted that I’m playing on a brand-new iPhone 11, so it’s possible I’m getting a better than average experience.

Overall, I’m very happy with Dead by Daylight Mobile. Lacking controller precision doesn’t really break the deal for me, although I am a big fan of weird ports/demakes like this where massive changes were necessitated by hardware. For a free port of one of my favorite multiplayer games, having this on the go (not counting the WiFi-requiring Switch version) is totally awesome. Once I acclimate myself a little better to the timing of skill checks, I’ll probably play this version a lot. It won’t ever replace the main, original game for me, but for what it is I really can’t say much negative about it. The hard-lock on for Killers is a bit excessive, and there’s some fine tweaking with controls that could maybe use another pass, but these are minor gripes. If you’re new or looking to have fun with a game you already like, it’s Dead by Daylight on a phone, short and sweet