The Dead by Daylight Silent Hill DLC is Amazing, But the Microtransactions Suck 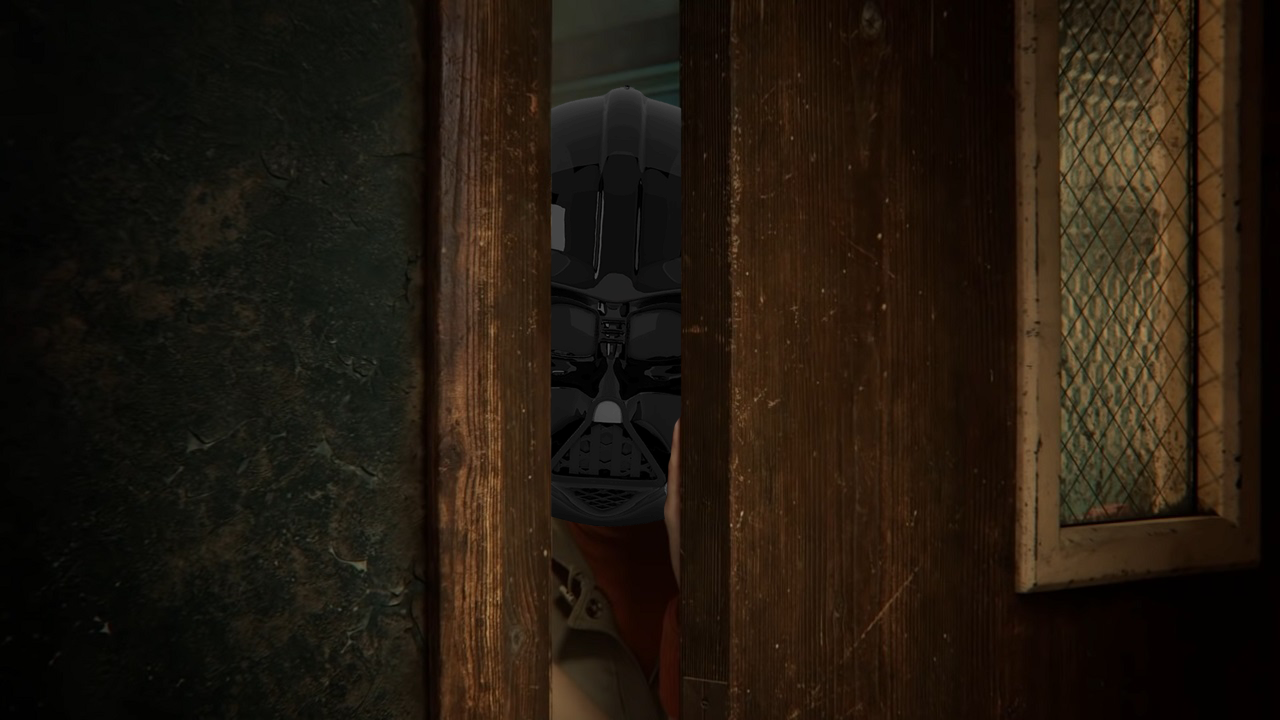 Dead by Daylight Chapter XVI: Silent Hill released a few weeks ago and I’m absolutely in love with it. I’ve been a huge fan of Dead by Daylight, which has hooked me (no pun intended) in a way that none of its competition has been able to (although Resident Evil: Resistance is easily a close second). The title has already managed to bring so many amazing licenses into its fold — Halloween, Nightmare on Elm Street, Stranger Things, the list goes on and on. Seeing the game’s growth over time has been amazing to watch as well, as earlier DLCs (Halloween‘s Haddonfield map especially) showed signs of being lower-budget efforts when compared to the more recent and robust additions. As a fan, it’s been gratifying to see the game grow so much, but I fear that it may be coming at too steep of a cost. I never paid much attention to the game’s microtransactions (which allow you to purchase cosmetics for both the Survivors and Killers), as none of what was offered really piqued my interest. With the arrival of the new Silent Hill DLC, I decided to take a look at them, and I can say that I am thoroughly appalled. But I’m getting ahead of myself. Let’s start with the positives.

Silent Hill is absolutely the peak of developer Behavior Interactive’s achievements with this game, resulting in easily the best DLC this game has received yet and a stunning love-letter to the original Silent Hill trilogy. Including a new survivor ( Cheryl Mason), Killer (Pyramid Head), and map (Midwich Elementary School), Behavior Interactive have gone absolutely nuts with it, putting their full might into crafting this expansion. That isn’t to say that previous DLCs have been bad, and maybe it’s just my bias for Silent Hill coming through, but goodness gracious do I love it (note: a few of these screenshots are from the beta because I’m dumb and kept forgetting to take screens). 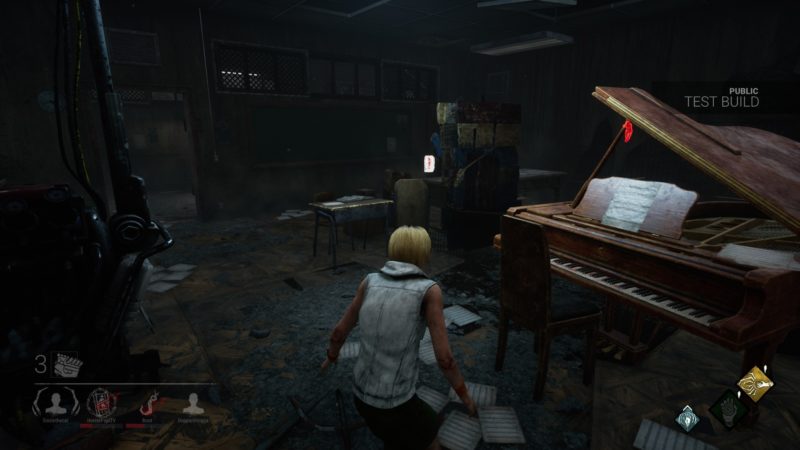 The atmosphere in Midwich is to die for, and the map itself is a treat if you’re familiar with its appearance in Silent Hill 1. Being the first location based on a video game in Dead by Daylight, the developers took painstaking effort to actually adapt the location. Everything is right where it’s supposed to be: recognizable rooms, visible puzzles, and the layout (as far as I can tell) is 1:1 with the original (save for some minor destruction designed to make it easier to navigate). Easter eggs are plentiful as well, with the inclusion of things like the locker room jump scare, the sobbing in the bathroom, and even the bloody notebook on the administration desk in the entrance. 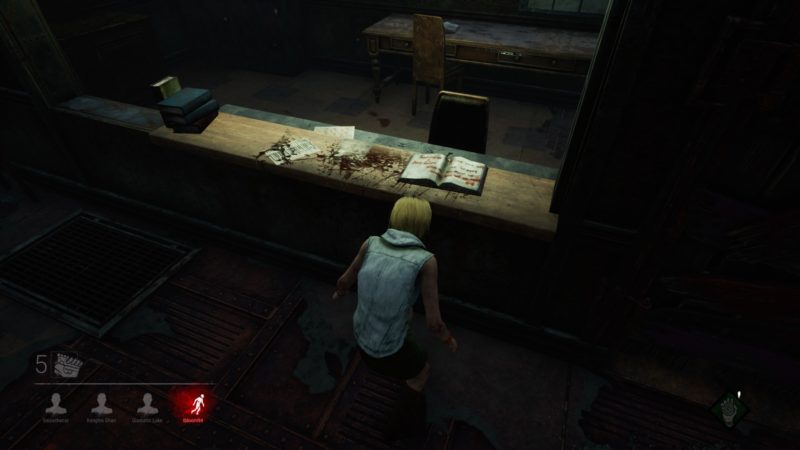 Playing as the two new characters is also a hell of a lot of fun. Cheryl comes with new perks, each leaning into her lore, with one perk, in particular, having a bit of fun with Cheryl’s Otherside connection. When you’ve repaired generators for a certain amount of time, you can call upon the Entity (the in-lore Dead by Daylight monster who’s pulling all the strings) to block the generator for a few seconds. You can’t work on it anymore, but the Killer can’t bust it up, either. It’s a wonderful get out of jail free card. Speaking of which, Pyramid Head is like the answer to my Killer prayers.

In Dead by Daylight, there’s a certain kind of abuse Survivor players can use to get out of damage and frustrate the living hell out of Killers called Looping. It’s technically a legitimate strategy, but it’s insanely frustrating. Pyramid Head puts an end to that with his unique attack “Punishment of the Damned,” which allows you to attack through objects. It’s a gleeful delight to exact revenge on frustrating players who take advantage of the in-game systems to dick around with you. 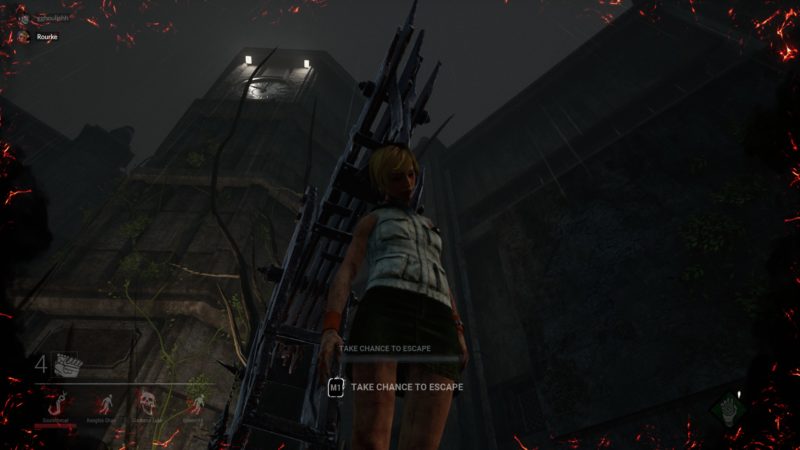 Experiencing a video game where Pyramid Head can chop Laurie Strode down with the Great Knife and Heather Mason can repair a generator with Ash Williams might be the coolest horror fan dream I can imagine. I’m absolutely in love with this, and I cannot believe that we’ve been blessed with such a wonderfully dedicated experience. It’s honestly the sort of Monster Mash I’ve always wanted.

Dead by Daylight‘s microtransactions are both awful and abusive of fans who aren’t keeping tabs on pricing. Yes, Dead by Daylight has since offered the ability to spend ‘Iridescent Shards,’ an in-game currency you get just for playing, but the amount of time needed for earning enough for even the most basic cosmetics is appalling. Iridescent Shards also can’t be used on certain cosmetics, although I do understand why they can’t be for any cosmetics linked to licensed characters. For characters that you can purchase with the in-game currency, the amount you need is comical. Over on Xbox (back in September of last year), I noticed that I was only 1/4th of the way towards getting a simple tracksuit cosmetic despite having over 150 hours in the game. I just checked again, now with 177 hours, and I’ve still barely budged.

Now that the Silent Hill DLC has released, I was excited to check out the new cosmetics for Cheryl, which allow her to completely change models into Silent Hill 1‘s Alessa and Lisa. It’s damn cool, and despite knowing that I wouldn’t be able to use the in-game currency on them, I was tempted to just say to hell with it and pay for them. But that’s the manipulation at work. Dear readers, the pricing for these cosmetics is a disgusting sham.

To celebrate Dead by Daylight‘s 4th anniversary, the game is having some sales, even on the new Silent Hill cosmetics (which are 10% off). These cosmetics cannot be purchased 1:1 with money, but rather a separate in-game currency called Auric Cells, which are sold in packs rather than the exact amount needed. Think back to the days of Microsoft Points on Xbox Live. Cheryl’s Lisa and Alyssa costumes are differently priced (presumably because the Alyssa one actually is just a costume for Cheryl, while Lisa is a completely new model), going for 1485 Auric Cells (Lisa) and 1080 Auric Cells (Alessa). Jumping over to the Auric Cell marketplace, it turns out that, since there is no way to buy the exact amount needed for either costume, you’re forced to purchase the next closest Auric Cell pack. The starter pack is $5, and nets you 500 Auric Cells. To afford the 1485, or hell, even the 1080 needed to purchase either cosmetic, you have to spend a minimum of nine dollars for the 1100 Auric Cell pack, and a minimum of fourteen dollars to get the Lisa skin. 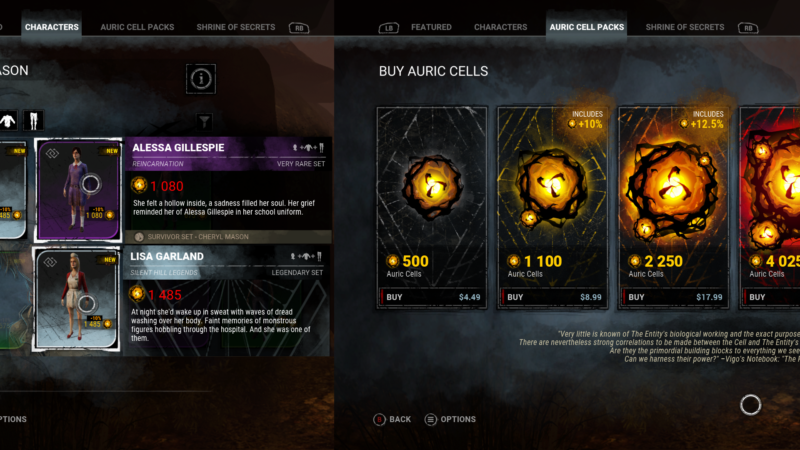 I love Dead by Daylight, there are so many cool things about it to enjoy, but this is absolutely shameful of Behavior Interactive. We should be past this sort of shit by now, and as games like Star Wars: Battlefront 2 dropped the model entirely in 2018 thanks to scathing fan feedback, it feels tired and gross. This disgusting scalping of players should have no place in modern games, especially as we move into the next generation of consoles (which will most likely get another port of Dead by Daylight). This whole ordeal has left a sour taste in my mouth, and I am deeply frustrated because I enjoy the game so much otherwise.

Please do better, Behavior Interactive.  And don’t let them get away with vacuuming up your money, Dead by Daylight players.