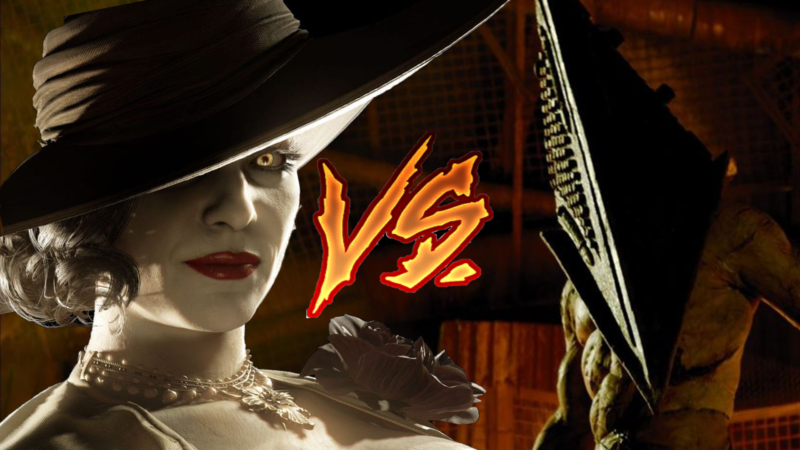 After some buzz yesterday concerning Silent Hill franchise composer Akira Yamaoka teasing a new project, all eyes have turned back to our favorite foggy town’s future. This morning, a few fans thought to check the official Silent Hill web domain, which was the cause of quite a bit of fuss in 2019 due to it defaulting out of Konami’s hands. What they found was… unexpected. After years of either being a completely blank page or a parked website that popped up search items for the series, the page has now received its first full makeover since about 2008. Uhhhh, well, see for yourself: 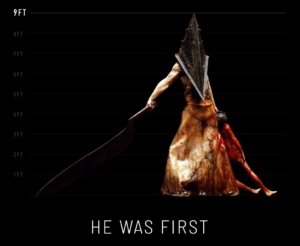 Yep, that’s a Resident Evil 8 meme on the official Silent Hill website. If you missed all of the meme-age, over the past few weeks Resident Evil fans and non-fans alike became absolutely obsessed with one of Resident Evil 8‘s primary antagonists, Alcina Dimitrescu, also known as the Tall Lady. It’s been an absolute roller coaster, from a combination of cosplay, fanart, and straight-up horny posting, to memes and now even corporate-sponsored memes (which of course means that the meme is now dead). All of this reached a fever pitch when Capcom revealed her official height, which is 9’6, including hat and shoes. I, and I’m sure many other Silent Hill fans, were not expecting the official Silent Hill website to jump in on this with a meme of their own, of course referencing the franchise’s most popular creature, Pyramid Head (albeit the film version).

This of course calls into question who exactly owns the Silent Hill web domain. After it defaulted in 2019, the site went up for sale for just under a cool $10,000 USD, which is hardly an insubstantial sum. Unfortunately, I appear to have never actually written about it, but the Silent Hill web domain was eventually repurchased by someone about a month or so after it defaulted, but we’ve never known for sure who. You can check the web domain’s history on ICANN Lookup, but the client holder and all pertinent information is labeled as prohibited. You can see listings for delete, renew, transfer, and update, but those don’t mean anything (even transfer, it simply refers the transfer from dormant to active again). You can see when the domain was founded, 2003, and that it defaults again at the end of this year unless the client chooses to re-purchase.

We’d assumed that Konami had been the ones to purchase the domain again, especially as they have been making efforts to actively reinvigorate the brand through tie-in content and even activating an all-new (and verified) Twitter account. Seeing this meme pop up on the site (and only the site, I might ad — it has yet to surface on any other official Silent Hill channels) gives great pause to that idea, especially seeing as, if nobody had checked the site, nobody would’ve seen this bizarre update. If not Konami, though, who? An enterprising, and apparently very rich, fan grabbing the domain for kicks is plausible, although it feels weird that this is all that they’d use it for. In a fantasy world where I had 10 grand to throw away on a web domain, I think I’d use it for a lot more than a single meme in nearly a year of ownership. I don’t think I’d have been able to resist throwing up something like a count-down timer, similar to the infamous Black Hound incident from 2015.

If Konami really does own the site, it stands to reason that jumping into the Tall Lady meme fray is a good way of drawing attention to the site being active again even though the series doesn’t have anything to show yet, but it’d be incredibly strange marketing. Again, no other Silent Hill hubs like the Twitter or Facebook accounts have used this image.

We’ll keep you posted, and will be periodically checking Silent Hill‘s website from time to time for more changes.