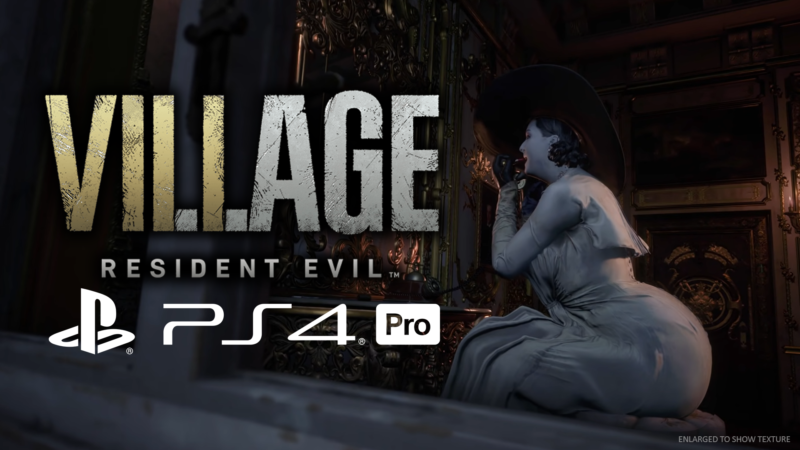 While there’s a lot less than usual to go over this time (although hardly the shortest footage we’ve poured over before), I figured it was still a good idea to take a look at the newest footage from Resident Evil: Village! The other day, we got a fresh look at the game thanks to a new video from IGN showcasing the game running on a PS4 Pro, rather than PS5 (which is what we’ve seen up until now). The game still looks shockingly pretty despite the step-down in power, and the new footage contains lots of neat little moments to dissect. Let’s jump right in, shall we?

The footage opens (and closes, but we’ll get to that later), with Lady Dimitrescu’s telephone call with Mother Miranda, which we’ve seen previously in most of the trailers thus far. We then quickly skip back in time to Ethan exploring the castle, just barely missing Dimitrescu as she makes her way upstairs. The castle is just beautiful and dripping with atmosphere and architectural beauty in every single room. We can see god rays popping a little bit here, but the lighting as a whole is just shockingly gorgeous. Ethan quickly equips his knife and follows Dimitrescu up the stairs. 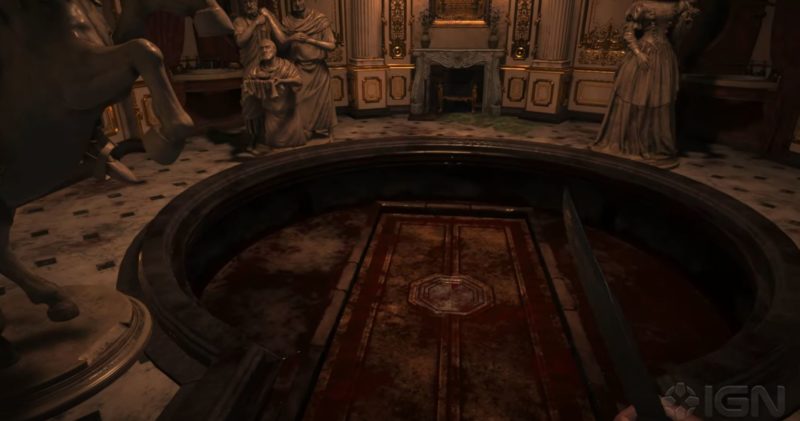 We fade-cut to Ethan opening up what is more than likely a puzzle door of some kind, inset in the floor. Surrounding the entrance are three statues — a horse, a lady in a fine gown, and three men with an offering of some sort. While statues look to be placed a bit haphazardly, I’m betting we can manipulate them in some way and that they relate to the floor opening like this. The door opens up, and we descend down into the depths.

Ethan now finds himself waist-deep in, presumably, the Dimitrescu’s famed blood-laced Sanguis Virginis wine. The wine cellar is an absolutely disgusting blood-soaked hell hole, and Ethan is forced to maneuver past gore and hanging bodies that have been left to drain into the pool. Ethan wades through the wine crypt, collecting handgun ammo and eventually fighting off Ghouls (the name I’ve been using for the cloaked husk creatures shown in the previous gameplay footage). Upon killing them, Ethan collects the game’s currency, Lei. The distance you can pick it up from is surprisingly large. It’s also worth noting that this is not using the LEMI pistol that he’s been shown with in other trailers, but instead the M19 pistol from RE7. 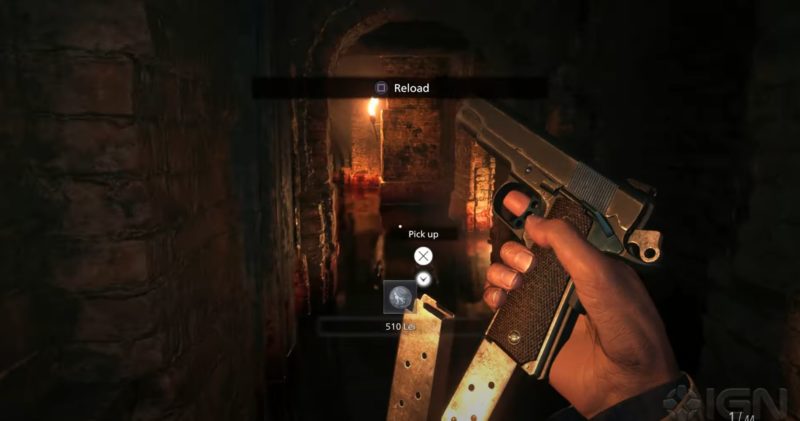 Of special note is the way Ethan reloads his pistol here, actually swapping the magazines out rather than the traditional Resident Evil method of just letting the spent magazine fall to the floor to be forgotten (which has been the norm since the very first game). I find this crazy interesting, as it suggests one of two things:

A. This is just an animation flourish, to show how Ethan’s grown between the two games as a combatant.

B. This indicates that reloading is going to be a lot more complicated than in previous entries.

The only other games in the series to have any sort of special method to reloading handguns are the two Resident Evil: Outbreak games. If you’ve forgotten, or never played, handguns actually only had one magazine and required the bullets to be manually reloaded into the magazine one at a time. You could find additional magazines in the world that could be used to do a quick reload like you normally do, but those still required reloading on their own as well. I somehow doubt that Resident Evil Village is going in that direction, as its gameplay seems much faster and more complex, but you never know.

Speaking of reloading, we also see Ethan using the new shotgun, which both reloads tremendously faster than the shotgun in Resident Evil 7, but also carries five shots instead of just four. It’s very probable that the reloading speed seen here has been upgraded thanks to the game’s resident merchant, the Duke, as seen previously when checking out his shop menu.

Next, the player lets Ethan take a little damage (albeit while blocking), presumably to show what it looks like. Similar to REmake 2 and 3, we get a quick prompt showing our health in the bottom left corner. Ethan then quickly dispatches the Ghoul, after which he gets a prompt that he can “craft ammo”. As much as I want to say this supports my “ammo + magazine” theory, this most likely refers to the ammo crafting system from REmake 2 and 3, where you combined gunpowders to create new ammunition. They could be bringing back the Chem Fluid system from RE7, but there’s no indication of that yet. 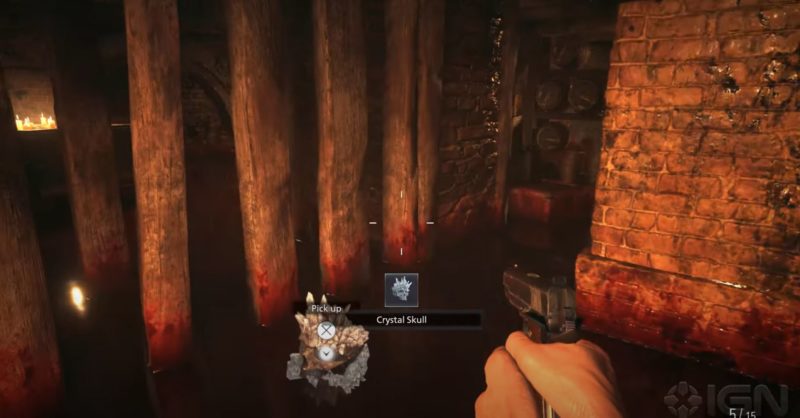 Following this, Ethan then stumbles upon a “Crystal Skull” (no, not that one). Considering it’s just laying there, I’m betting this is a sellable treasure, something that can be traded with the Duke for a high price. The object itself appears to be an actual skull with crystals forming out of it in the shape of a crown. Ethan grabs it then makes his way upwards via a rudimentary elevator.

Once a the top, Ethan finds himself back outside on a balcony, overlooking the village. While it’s a small detail to note, there’s actually a pile of… trash, just laying about on this balcony. Shoes, wood, some bottles, and several buckets. There’s a small wooden walkway that Ethan uses (until it collapses) here as well, that while it’s huge and has support structures that reach all the way to the ground, also doesn’t seem to be part of any sort of construction. Is it possible that villagers could have been living on the edges of the castle, or perhaps one of the castle’s servants escaped to these areas? These objects feel royally out of place compared to the, well, royalty of the interior of the castle. The Dimitrescu daughters at the very least seem to have an aversion to sunlight (based on notes found in the Maiden demo), so could it be that they were counting on not being found thanks to that? 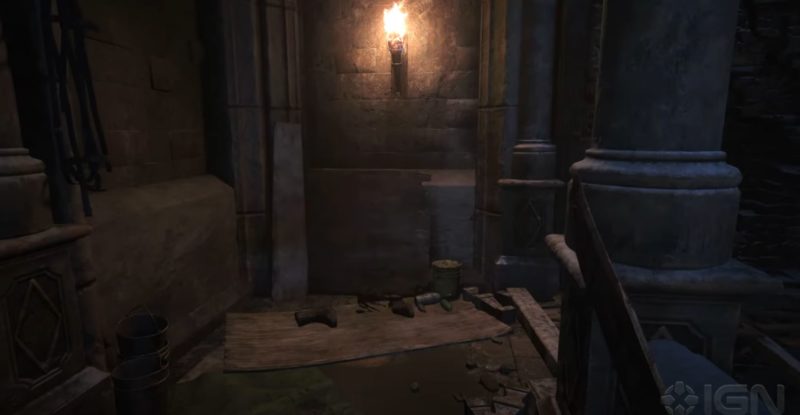 The bridge quickly starts to come apart as Ethan crosses it, and once he makes it to the other side, we find ourselves outside of Dimitrescu’s window, witnessing her phonecall. It’s interesting to see here because it’s the first time we’ve gotten the chance to see this play out in real-time, rather than being shown out of context in trailers. Here we also get a chance to actually compare this with older footage, showing the difference between what was presumably PlayStation 5 footage before and the PS4 Pro version. 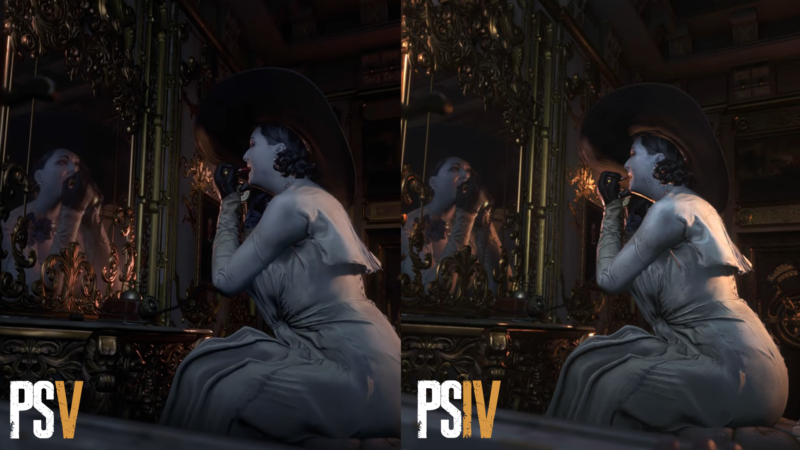 The most obvious difference is the lighting, which glows more on PS4 Pro, but has deeper shadows on PS5. When actually watching the footage you can also notice that Dimitrescu’s reflection in the mirror has an absolutely terrible framerate, chugging behind the game’s otherwise smooth 60fps. Previously the mirror was shockingly gorgeous, so this is an obvious accommodation for the lower-powered hardware. 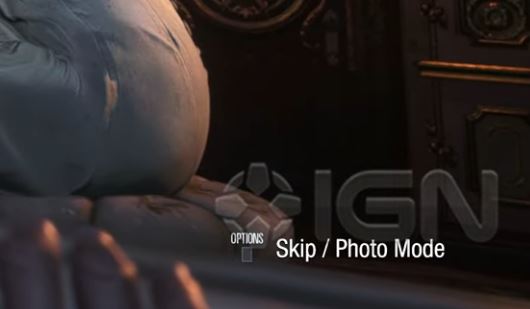 A major takeaway here, however, isn’t actually Dimtrescu herself, but a prompt in the lower righthand corner. Yep, that’s a Skip / Photo Mode prompt. The inability to skip cutscenes was a major complaint from RE7 fans, and it’s awesome to finally have it confirmed here. I love getting into the deep lore my first time through; running through the game over and over again not so much. The Photo Mode addition is also interesting as well, as I’ve been desperate for a photo mode since REmake 2, which I feel would’ve really excelled from the addition of one. I’m a bit surprised to see it here, though, during a cutscene. It seems like it would be kind of a… waste to have a photo mode option during cutscenes, where all you’d really be doing is pausing the cutscene. All platforms this game is releasing on have a native way of taking screenshots, so unless we can zoom the camera around during cutscenes (unlikely), this feels very strange.

Following this, our final moments with the trailer show off just how powerful Lady Dimitrescu is, as she hoists up and flings her makeup station (and telephone) across the room like they were made of cardboard, growling “To hell with the ceremony!” to herself. Perhaps her “servitude” to Mother Miranda may not be as loyal as previous trailers have led us to believe, and she’ll break off from their traditions to go after Ethan personally. Her attitude here makes me wonder if Ethan did some really lasting damage to her daughters by this point, perhaps even killing one. This is some pretty serious rage for her daughters just whiffing on killing him a few times. Guess we’ll see.

That’s all for now, but an all-new Resident Evil Showcase stream is set for this month, with the date presumably being revealed any day now. Resident Evil Village itself releases May 7th across Xbox One, Xbox Series S/X, PS4, PS5, and PC. 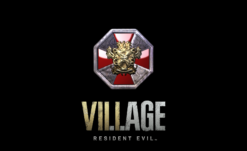