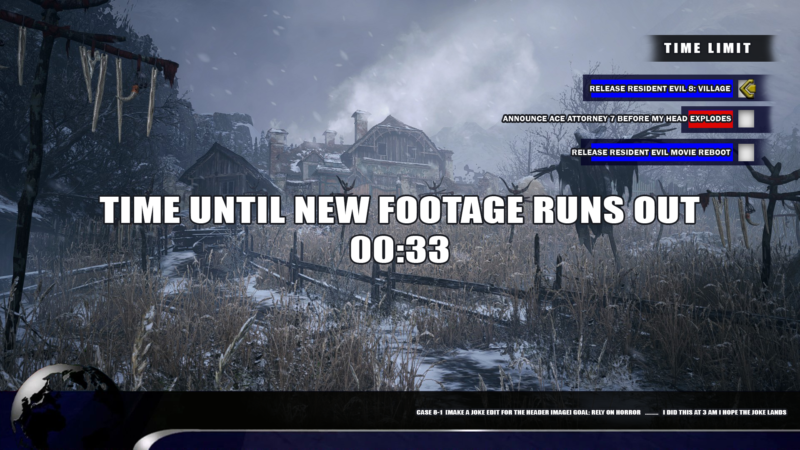 While we all sit here patiently waiting for that inbound Winter update, turns out our first real look at Resident Evil 8: Village in action is included in a new PlayStation 5 ad. The video, which features Japanese Tennis champion Naomi Osaka, showcases two of the PlayStation 5’s upcoming titles. The first is no surprise, Spider-Man: Miles Morales, but the real treasure is when she begins to play Resident Evil 8 afterward. Providing commentary over the gameplay (with the video often cutting from footage back to her), we get to see just about 45 seconds of new gameplay footage from the game’s previously revealed village introduction section. I know that doesn’t sound like much, but it’s more than we’ve gotten in months so I’ll role with it:

Now again, there doesn’t seem to be a whole lot to say here — on the surface. Over-analyzing the video (like I always do) reveals a number of new details as well as confirmations of features that might be present in the final game. Let’s start from the top, and work our way down. Some of these were spotted by JJ from Residence of Evil too, so shout out to him! I’ll try not to blather on about general world stuff, as there isn’t much to talk about. We get a few new angles down one particular alleyway in the village that we’ve seen in previous trailers and screenshots — we can see more buildings that are potentially explorable, as well as a water tower off in the distance. These aren’t really revelations or anything though. 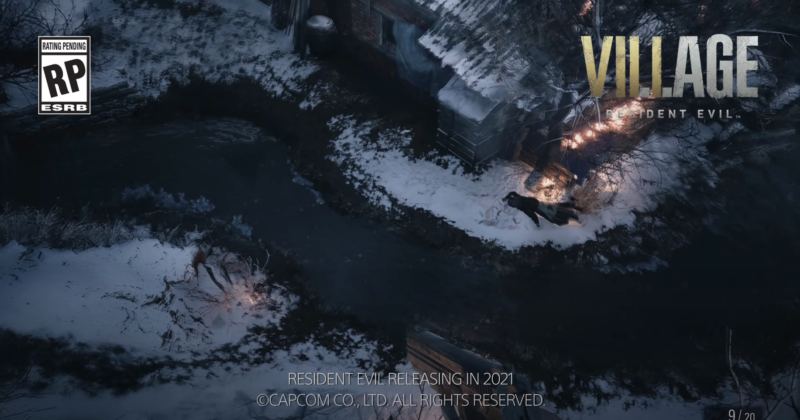 Now it’s worth noting right off the bat that we’re going by Osaka’s descriptions of actions we’re mostly not seeing. During the gameplay we’re shown, Ethan steps off the roof of a building and falls to land near a small stream running along the edge of the village. A corpse is shown near the river, and the nearest house is burning from the inside as well. While we’re seeing this, Osaka describes the new rumbling features of the DualSense controller, noting that it “pulses when you like, jump over something or climb over something”. It’s interesting wording, although difficult to parse. Jumping and climbing are obviously two different actions (not to sound super anal, but since I am), so it’s possible that she’s literally stating that Ethan can do both.

To play devil’s advocate, however, it’s possible that she’s also simply correcting herself mid-sentence. Osaka is speaking off the cuff and giving her first reactions to the content as she plays. She’s also not a game’s analyst, and probably isn’t sitting there furiously trying to sus out every detail of the demo they’re having her play. Ethan was already capable of hopping down and climbing up small ledges, so the most likely possibility is that it’s just a more drastic version of that. It’s still worth noting though, simply for her choice of wording. If Ethan were to jump by using a button rather than a prompt in Resident Evil 8, it’d be a first for the series. All that said, her next statement is what truly intrigues me.

“And like, my character just slid, so it did this like, vibration thing, that made you feel like you were also sliding”. Now that is very hard to misinterpret. There’s a massive difference between crawling/crouching (which Ethan does in Resident Evil 7) and sliding. Now there are two possibilities at play here. The first I’m going to scratch down as being the most likely — this is something that happened in a cutscene or was otherwise non-player controlled. She walked toward the edge of a hill or some other incline and slid down it without direct control over it. The other possibility is much more interesting though, that Ethan might have the ability to slide as part of his mobility set.

Ethan already has the ability to crouch, meaning it’s very possible that a slide action may have been added to complement that. In a number of first-person games, the player will crouch at the tap of a button, but if that same button is tapped while sprinting, they’ll go into a slide across the ground for a few feet before continuing onwards crouched. Resident Evil 6 actually has a similar feature. While you cannot crouch, you can run into a slide with a pull of the right trigger/R2. Not exactly the same, but there’s precedent for this sort of action in the series.

Afterward, we see some incidental gameplay; Ethan checking a pot of soup, wielding his new knife (which looks a lot like a kitchen knife), the same footage of the shotgun man from the reveal trailer in the closet, and eventually Ethan turning a corner to look into a darkened hallway. At this moment, we actually hear the Resident Evil 7 inventory sound effect, but nothing actually happens on screen. This more or less confirms that what we’re seeing isn’t actually what she’s playing, and the audio is taken from the ambient sound of her playing rather than the footage we’re seeing. It’s interesting to hear though — but there’s also the chance it’s just a stand-in. Capcom has previously shown off a new “Atache’ Case” inventory design for Resident Evil 8, but indicated that it may or may not be final. They’re clearly still reluctant to show it off. 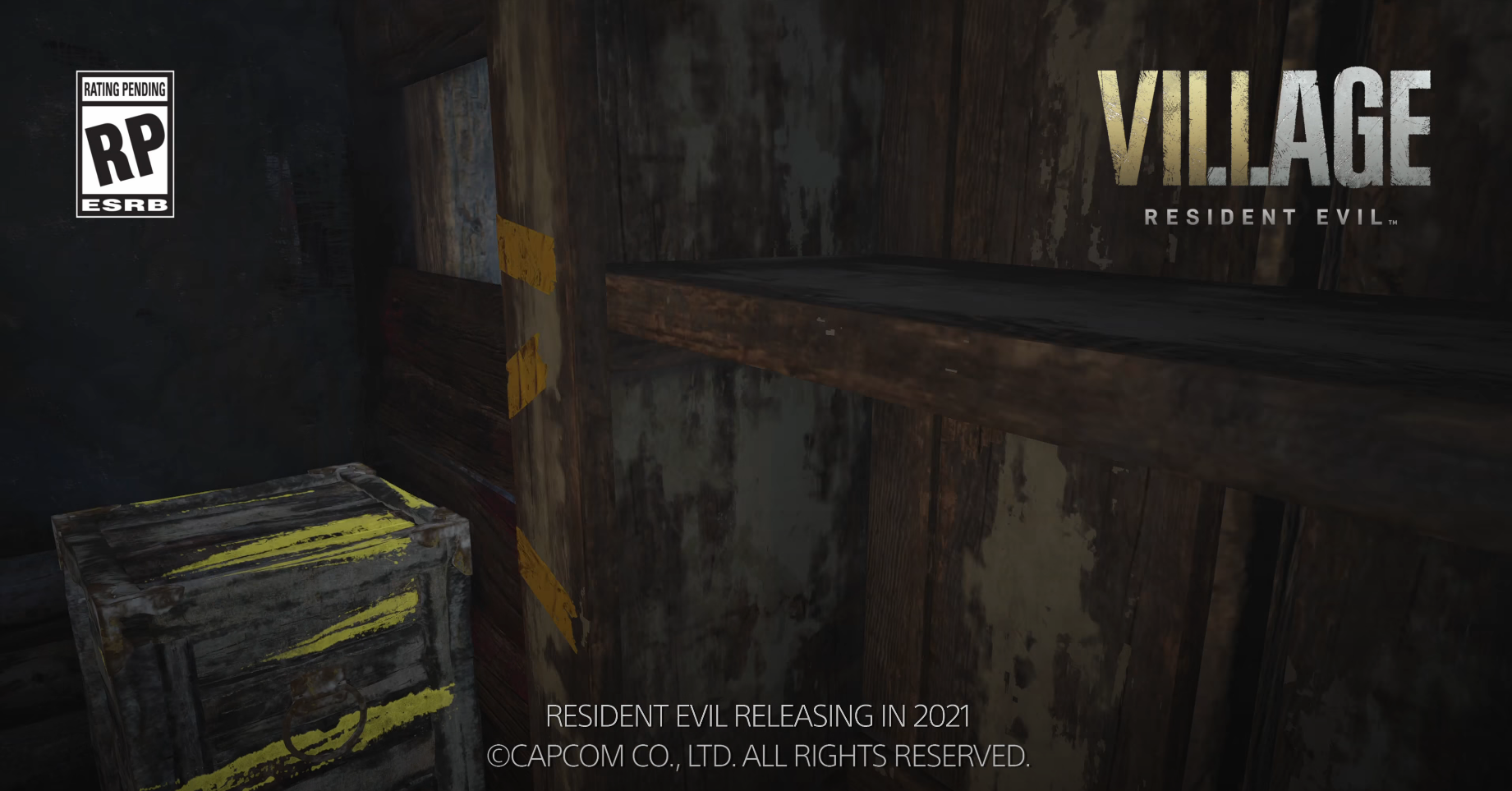 Next, we see Ethan barricading himself from the attacking monsters, and just to his left we see a new look for the breakable boxes that have appeared in nearly every game since Resident Evil 4. They still retain the yellow striping used in Resident Evil 7 and REmake 3, but this time it’s painted on rather than yellow electrical tape. That said, the yellow guide tape is still on the bookcase Ethan’s pushing, so either we’re seeing unfinished assets, or Resident Evil 8 will have a mix of both. There does appear to be a metal handle on the side of the wooden box, which is an odd detail.

Next up, we see Ethan peering out what looks to be a basement window, holding the old man’s shotgun, with one of the beast-men stalking past. The next shot is what I find one of the most interesting ones, though: Our first look at Resident Evil 8‘s redesigned green herbs! 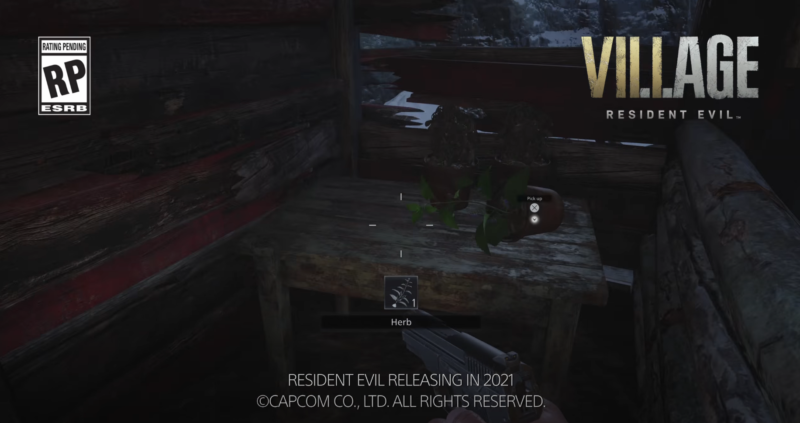 In the last three games, green herbs had been redesigned with a sort of rosemary look to them, sprigs rather than leafy. This new look returns them to their traditional rich greens look, which feels super nostalgic in a way. It hasn’t been too too long since the last time we saw them like this, which was 2016’s Umbrella Corps, but still fun. It’s super interesting to see the description prompt as well, both showing us what the item is (and how many, indicating that perhaps we can grab bushels of herbs). It’s also kinda neat seeing the herb will be physically removed from the pot upon pickup. This is always what has happened based on the inventory icon (save for Resident Evil 4), but seeing the pot left behind is a neat touch. 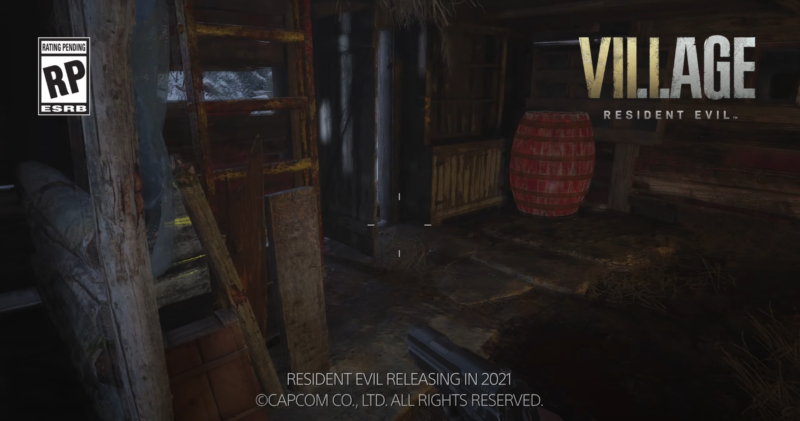 Finally, our final shot shows off the Resident Evil 8 version of an exploding barrel. Resident Evil has typically depicted these as oil drums, but this new design is wooden (which Resident Evil 4 used in certain areas). You actually see one of these earlier than this, at 2:04, but this is a clearer shot of one.

That’s all we’ve got for now, but honestly, it’s the most Resident Evil 8 info we’ve had in weeks. We’ll be keeping our eyes open for more information hidden in random advertisements for other products since apparently, you’ll never know. 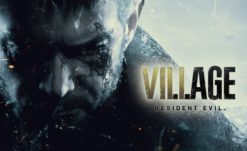 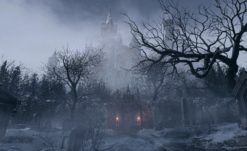