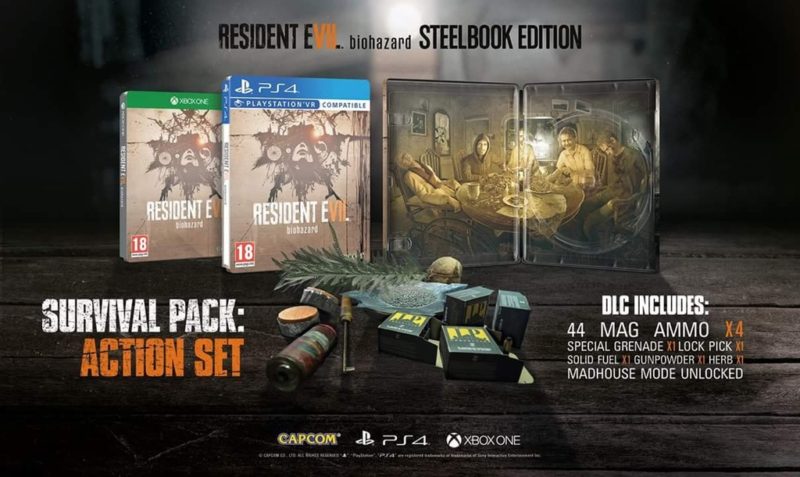 Goodness me, we’re reaching Watch_Dogs levels of ridiculousness with these collector’s editions.

While we’re still waiting on official confirmation for that $180 edition of Resident Evil VII: Biohazard leaked by GameStop a few days ago, yet another version has popped up. A new UK promo features a Steelbook edition of the game, sporting that cool looking face-logo on the cover, and the full dinner table artwork (complete with Andre, from Beginning Hour) on the inside. Neat. This edition is up for Pre-order in the UK for 67£, and it even comes with a bunch of extra in-game goodies, a few of which we’re both seeing for the first time, and getting a better description of than before.

The first fun thing is the most prominent item, the .44 Magnum ammo. This isn’t really a surprise, the .44 has appeared in very nearly every Resident Evil game to date, but this is the first confirmation we’ve had from RE7. I’m curious as to how early in the game we’ll be getting said Magnum, though, considering these extra rounds. The magnum is almost always a very late-game pick up, often requiring the player to go out of their way or even solving puzzles to snag it. So either this ammo is going to be sitting in our item boxes for a very long time, or the Magnum may have lost some of it’s powerhouse status. Either way, considering how scarce the ammo for this weapon typically is, having 4 extra cartons of ammo for it will be a sweet perk.

The next new thing is way more surprising in my opinion. Labeled as a Special Grenade, this was one of the few things I was very much not expecting to see in RE7. Grenades are in all of the OTS RE games, appearing in some form or another (like the explosive bottles in Revelations 2), but outside of the Grenade Launcher weapon, grenades were never a part of the original titles. Considering how much Capcom is pushing for RE7 to be a return to form, not to mention tight corridors and claustrophobic atmosphere, I really wasn’t expecting a grenade to be showing up. If that is indeed how this weapon works. 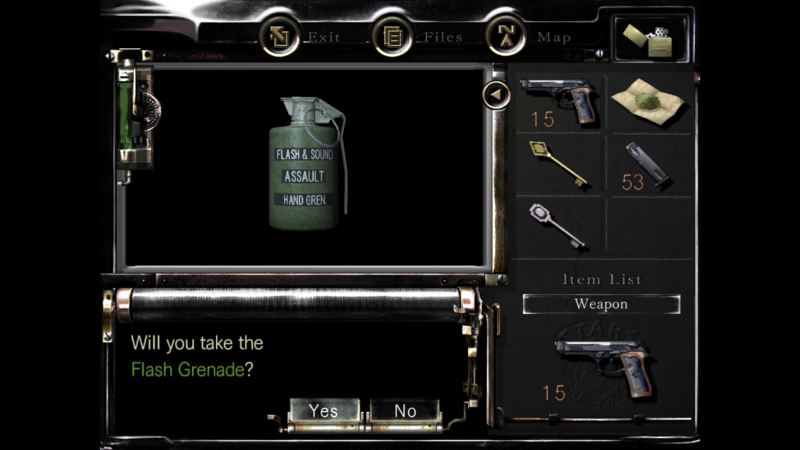 There’s actually another way this item could be used, aside from the typical CoD “pull the pin and toss” mechanics. Grenades did have one very small role in REmake (well, technically two, but that doesn’t count), and I’m betting RE7 is going for something similar. In REmake, a special kind of explosive Flashbang was used by Chris as a defense weapon. When being grabbed by one of the mansion’s monsters (zombies, Hunters, Cerberus, even the freaking Tyrant), Jill and Chris could fall back on a handful of single-use self defense items: a dagger for both, Jill got a stun-gun, and Chris got the super-powerful grenade weapon. This was awesome since (if played right) it could take out two zombies in one explosion (although you had to be careful- it dealt a sizable amount of damage to Chris as well if he got too close). I’m betting that this Special Grenade weapon may be similar in use, more of a self-defense weapon than an assault one. We’ll just have to wait and see what it’s true use is in the final game.

The other items are all things we’ve seen before, an extra herb, a few of the solid fuel starters for the flamethrower, an extra lockpick. The one that gets me groovin’ the most though is confirmation of something I’d speculated on months ago. A small cloth packed with black powder turns out to indeed be gunpowder, presumably used in crafting ammunition on the fly. This was a feature that was super useful in Resident Evil 3: Nemesis, and I’m happy to see it return. They also include instant access to the Madhouse Difficulty, which is otherwise only available after beating the game at least once. We don’t know much about this difficulty, aside from some vague comments that elements like saving may become more restrictive. I’m honestly hoping that it will be a return REmake‘s nutso Real Survivor Mode, which disabled auto-lock for aiming and disconnected the item boxes (meaning that each one was it’s own separate item box, items placed in one could not be retrieved from another), but add in classic RE-style dying, meaning that if you die, you’ll be booted to the menu and forced to restart from your last manual save from the load menu. There’s actually a chance that it may have something to do with Real Survivor Mode since I’ve got a sneaky suspicion it’s name is a callback to a line Jill Valentine has in REmake. 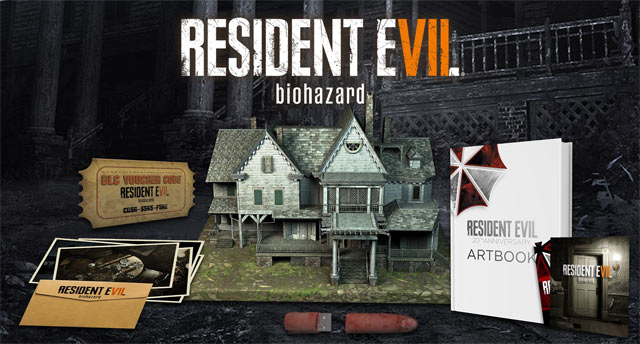 For those of you interested, we’re now up to five different editions of RE7. Counting this Steelbook version, the next one is Resident Evil 7‘s standard edition, which comes with just the game (although it also includes a number of bonuses for pre-ordering, including the aforementioned Madhouse Difficulty) for $59.99. Next up is the Deluxe Edition (physically exclusive to GameStop), which comes with all the pre-order bonuses, some snazzy packaging, and RE7‘s season pass (which includes three DLC packs, each containing either a whole new story chapter or a handful of short side-story chapters) for $89.99.

For the truly frugal, there’s the insane $180 collector’s edition (although there’s a $100 version without the game available in Europe) that includes the game, three exclusive interchangeable covers, a 20th anniversary edition art book, 5 lithographs (fancy print-outs of in-game screens), some sort of special DLC voucher (speculated to be the season pass), a replica finger 16gb USB stick, and a model of the Baker mansion. Finally, there’s the Japanese Complete Edition, which is 16,490円 (about $150), which contains a completely different set of items: The uncensored Grotesque Version (which is the rest of the world’s standard version), a set of creepy playing cards, a sample soundtrack, a heat-sensitive mug, coffee (?), rosemary seeds (since RE7‘s Green Herb is based on rosemary), and something called the Resident Evil 7: Inside Report, which I’m guessing is their version of the artbook.