RE0 HD, REmake HD, RE4 HD, Coming to Switch Digitally May 21st - Rely on Horror

RE0 HD, REmake HD, RE4 HD, Coming to Switch Digitally May 21st 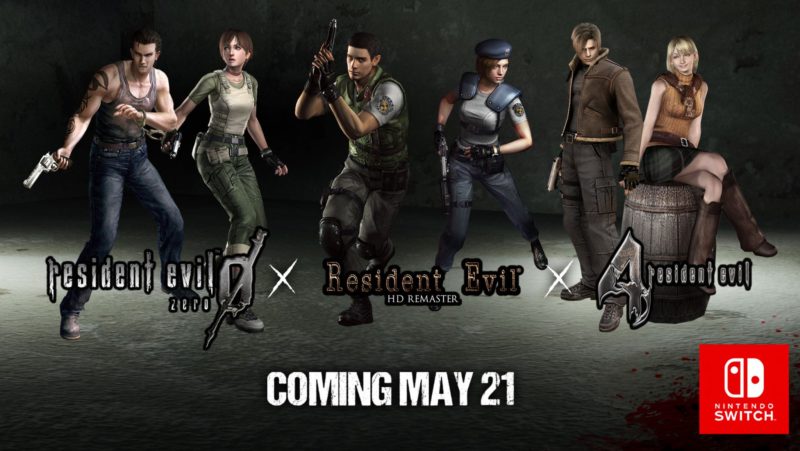 It’s been a while since these ports where announced, but we finally have release dates for all of them — in that they’re all releasing the same day! RE0 HD, REmake HD, and RE4 HD are all coming to Nintendo Switch May 21st, with a physical release for RE Origins Collection (a bundle of RE0 HD and REmake HD) coming sometime later. This is more than exciting, at least for me, as these are games that I’ve always wanted to have on the go (especially RE4) and am so glad that they won’t have to be scaled back the way they would have on older handhelds (or uh… as they actually were scaled back on mobile).

Resident Evil Zero takes place 24 hours before the events of the original RE, starring rookie Rebecca Chambers and military prisoner Billy Cohen as they attempt to escape a morbid training facility and uncover the origins of Umbrella’s virus. It was the very last game in the series to be presented in the “traditional” style of RE game design, although it had a tremendous amount of “shake up” style tweaking. From the new “drop and pick up” mechanic (which eliminated the use of “item boxes”) and the introduction of “partner zapping” (swapping places with a second, single player controlled character — this would later be used in Revelations 2 as well), there was enough that made it stand out from other RE games, for good and for bad. While the original game has something of a bad reputation thanks to these changes, I’ve always enjoyed the game for what it was and even gave this release (which put a tremendous amount of work into re-doing visuals, not just up-scaling them) a 10/10 score when it released on XBO/PS4/360/PS3/Steam in 2016. You can read the original review here.

Resident Evil (2002), most often referred to as “REmake” by fans, is considered one of the greatest survival horror games ever made. Blending meticulously detailed environments, oppressive horror atmosphere, and some of the hardest of the core survival horror gameplay, this release took everything that made the original 1996 Resident Evil great and turned the knob up to masterpiece. Set on July 24th, 1998, we follow S.T.A.R.S. officers Jill Valentine and Chris Redfield as they are forced to take refuge in an ominous (and very much not on the map) mansion in the middle of the woods when a search for their partner team goes south. While this remastered release, unfortunately, wasn’t able to go in with the same level of total visual upgrade RE0 HD did, it’s still a simply gorgeous looking game, and absolutely worth your time and money. You can read our original review here.

Resident Evil 4 is one of the best video games ever made. You can make the argument that it’s what set RE off on its action bent for the decade or so that followed it, but there’s no denying its incredible impact on this industry and just how damn fun it is to play even for the hundredth time. RE4 reshaped the third person shooter overnight in 2005, and essentially every single third-person game that has followed it has emulated its aiming system. Set six years after Resident Evil 2 (the original or the remake, doesn’t matter), we follow Leon S. Kennedy in his new shoes as Government agent, sent to retrieve President Graham’s daughter from a terrorist organization in a rural part of Europe. All is not what it seems, however, and Leon finds himself in a whirlwind of horror as the local populous take-up arms against him, literally puppeteered by some unseen malevolence. These aren’t zombies — and in fact, they might actually be worse, infested with an ancient evil. While this release will more than likely be the 2014 “Ultimate HD” release from Steam (at least the Xbox One and PS4 versions where), meaning it won’t have any additional visual enhancements, it’s still the best way to play this classic (officially). You can read my review of the most recent console versions from 2016 here.

For the moment, we don’t have any more information regarding these releases, and whether or not they could feature any Switch enhancements. Both Revelations games had minor Amiibo support, as well as Gyro and IR support for aiming and reloading. One of RE4‘s best versions is the Wii Edition port, so I’m hoping that if anything this version will have similar functionality (as it’s been a very long time since we could control a Resident Evil like that). There’s every chance that 0 and REmake will have some functionality as the RE Archives releases on Wii also had some minor motion-controlled elements (largely shaking for reloading and getting out of a zombies’ grip, if I recall), but for now, we simply don’t know. Again, these hit Switch May 21st, so hopefully we get more information sooner rather than later. You can bet your ass we’ll be reviewing and talking about them when they release, though.