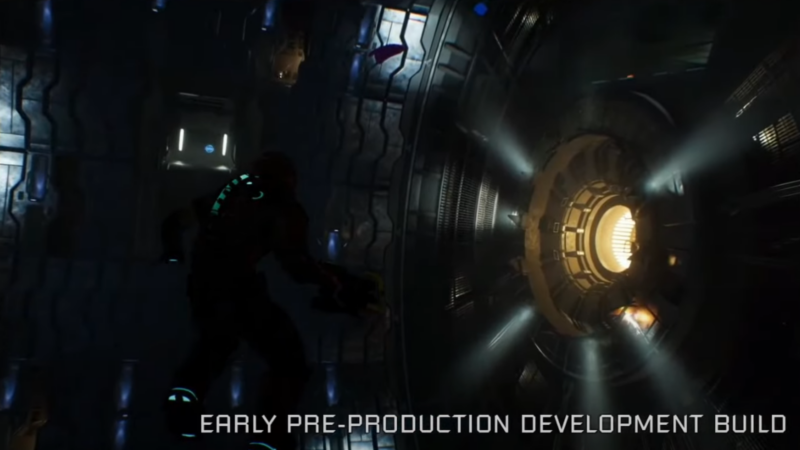 We’ve been waiting a little while to get new info on the recently announced Dead Space remake, and finally — it’s here! Earlier today, developer EA Motive showcased a look at early pre-alpha gameplay and tech demonstrations during a live stream interview. The footage and details were positively awesome, if very very early and rough. To be clear: what was shown off isn’t at all finished, and not at all representative of the final game’s visuals, but very exciting nevertheless. The entire stream runs just under an hour, but it’s worth watching the whole thing. That said, we’ll break down the most important bullet points:

The main takeaways from this are getting some insight into just how different we should expect this remake to be. There’s been a lot of concern as to whether or not this remake was more like the original game with nothing but a glossy finish over top of it, but we’re delighted to report that it’s so, so much more. While the developers have previously discussed how the entire game is being rebuilt from the ground up (using the original Dead Space‘s geometry and designs as a blueprint), we finally got to see what that looks like in action. During the stream, three sections were shown — the hallway where the survivor is hitting his head on a wall, a cylindrical zero-G chamber, and a connecting hallway just beyond that. All three are instantly recognizable, but this time we get to see just how far of a leap has already been made, even in pre-alpha:

Here is how Dead Space Remake looks, side by side pic.twitter.com/GS3BBWJt13

They went on to show off how Dead Space 2 and 3‘s Zero G free-float mechanic has been implemented into the world, and how its already changing up gameplay, most notably how it’s opened up the world. In the aforementioned connecting hallway, the devs showed off an entirely new area that Isaac is now able to access thanks to the free float mechanic, branching off from the original location. Fans already took note of a few interesting environmental details in these areas as well, such as a locked door that seems to require a lvl keycard, ala Doom and other classics. The Ishimura will also be completely freely explorable, with no loading screens breaking up chapters or areas.

They also show off some testing arena combat, showing Isaac facing off against a basic Slasher type Necromorph. Despite the untextured tester room environment, we can get a really clear look at both the new Isaac and Necormorph model and just how wonderfully detailed they already both are. Combat has been beefed up to feature new dynamic dismemberment, similar to the gore in Resident Evil 2 Remake, where the flesh will be blown off of a Necromorph’s bones in the places that your shots land. This was shown off as a way to indicate a limb’s “health”, as you cut further down to the bone until finally detaching the limb completely, as well as making each weapon have a unique impact point on the creature’s body, wherever you shoot. The Plasma Cutter and Pulse Rifle were used in the footage, and it was tons of fun seeing the way they picked apart their undead target.

Along with all of these exciting gameplay improvements, it was also announced that the story is being re-worked — not to remove content from the original Dead Space, but enhance it. Isaac’s quest to find his girlfriend, Nichole, will now be an active part of the story as you explore the Ishimura, rather than taking a back seat for the majority of the story as it was in the original. These changes will also be serving to help enhance Dead Space’s connection to the sequels, and flesh out the world the game inhabits.

Isaac has something to say. #DeadSpace pic.twitter.com/csOKT6ZCYV

A big part of how this is being accomplished is the return of Isaac Clark’s original actor, Gunner Wright. Announced during the stream, Wright is reprising our favorite CEC Engineer and providing full dialogue this time around rather than Isaac being a completely silent protagonist like he was in the original game. This is wonderfully exciting, especially as it was on my list of 5 things I wanted out of this remake. There are caveats to that, however — in order to maintain the original game’s dead-silent atmosphere, the dev team are following two rules with the way Isaac speaks. Firstly, “Isaac will primarily only speak when spoken to”, meaning that he’ll converse with other characters rather than remaining silent during story moments, and second, Isaac will sometimes speak in a situation where it would feel weird if he remained silent. This second one most likely means that he will have spoken reactions on occasion, although only in important moments rather than his general rambling and swearing from the other games.