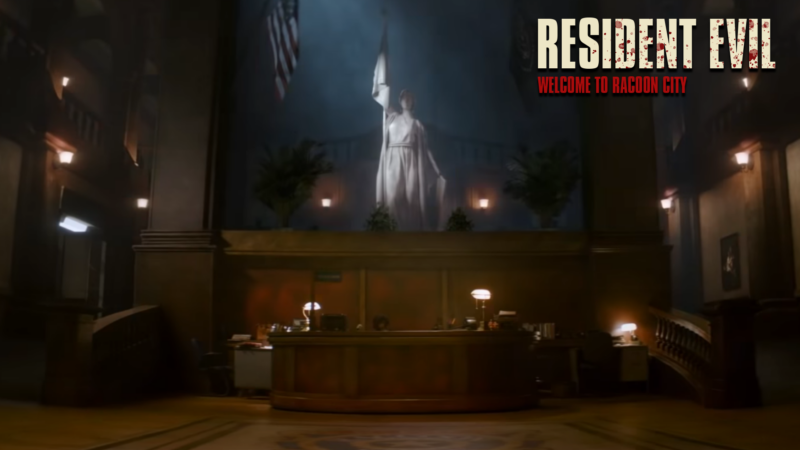 With less than 20 days left until the release of Resident Evil: Welcome to Raccoon City, marketing is going nuts with some new piece of promotion every other day or so. We’ve already seen two full-length trailers, a mini-trailer, character vignette trailers, and an “accuracy highlight” teaser, and today we’re getting a new teaser focusing on the sets. One of the few things we knew before the full trailer’s reveal last month was that a massive amount of effort had been put into visual accuracy, as fans had snapped pictures of multiple shooting locations. From the R.P.D. front gate to Kendo’s Gunshop, there was a lot to froth over even without a whole lot of context. Today, director Johannes Roberts has unveiled a new look at these locations up close and personal, and it’s amazing.

As the trailer opens, we get a few new and returning establishing location shots of the R.P.D., the Mansion, and Raccoon City Orphanage. Intercut with interview clips with Leon actor Avan Jogia and Claire’s Kaya Scodelerio are a few more shots and then we get to a nice close-up of a Raccoon City Times newspaper, folded up on a desk.

First things first — yes, what’s written on the paper is mostly gibberish. This is what’s known as Greeking, and is a tool used in film and other visual media to fill out text that isn’t intended to be read but instead intended to look like there’s something to read. The only text we’re meant to be able to read here is the paper’s name, and the “Missing Children/Hero Cop Rescues Missing Child” headlines. Odds are good this shot isn’t even actually in the movie, but rather a production video taken for the express purpose of these teasers, showing off small details (note how weirdly shaky the camera movement is). The “Hero Cop” headline makes me wonder if it’s referencing Chris Redfield, as in the Character Vignette trailers, Director Roberts called Chris “a small-town hero”, but we aren’t provided with any other context.

There also seems to be a small doodle of maybe Brad on a post-it note. Yeah.

Following this, we get a few returning shots from other trailers and a few frames here or there of new ones (such as Claire zipping her jacket up as she prepares to ride out from Chris’s house on her bike), with the first truly new shot being an establishing shot of Emmy’s Diner. This location only ever featured in Claire’s intro from the original Resident Evil 2, and hasn’t ever been brought back, so this is actually a fairly deep cut all things considered. This was another one of the locations that fans got a peek at during principal photography, but it’s great seeing how it was intended to look. The R.P.D. van out front probably housed S.T.A.R.S. on their way to dinner, which is the scene we saw in the previous vignettes where Jill shoots Wesker with a sucker dart and steals his sandwich.

Following that, we get another new shot, this time of a (somewhat ratty and old) Umbrella billboard across from some traffic lights. Something that might jump out at you, however, is that the Umbrella logo is inverted, with the white and red ‘pie pieces’ of the logo switched. It’s important to note that this sign doesn’t actually say Umbrella Corporation, but rather Umbrella Pharmaceuticals, which might be the reason for this difference. In older Resident Evil media (specifically the S.D. Perry novelizations), Umbrella was broken up into different divisions, with Red Umbrella, Blue Umbrella, and White Umbrella. White Umbrella was actually referenced in the first Resident Evil, in the ‘Orders‘ document, which is signed off by ‘White Umbrella’. The games have never elaborated on this, and it’s never been referenced outside of the very first game.

This film running with the idea that Umbrella has different logos for different branches of the company is a pretty good take, in my opinion. There’s evidence that Umbrella hosts other companies with various different plays on both the Umbrella name and logo in the games (such as Parasol) so playing into that here can help illustrate just how far Umbrella’s reach can get.

Next we get a new, longer cut of the Spencer Mansion main hall introduction scene, which now pans up farther to show the 2nd-floor balcony and more of the painting at the top of the stairs. I’m still just so… overwhelmed seeing this place brought to life. It’s really neat to see that even the ceiling is accurate, considering it’s somewhat hard to see clearly in everything but The Umbrella Chronicles version of this location. 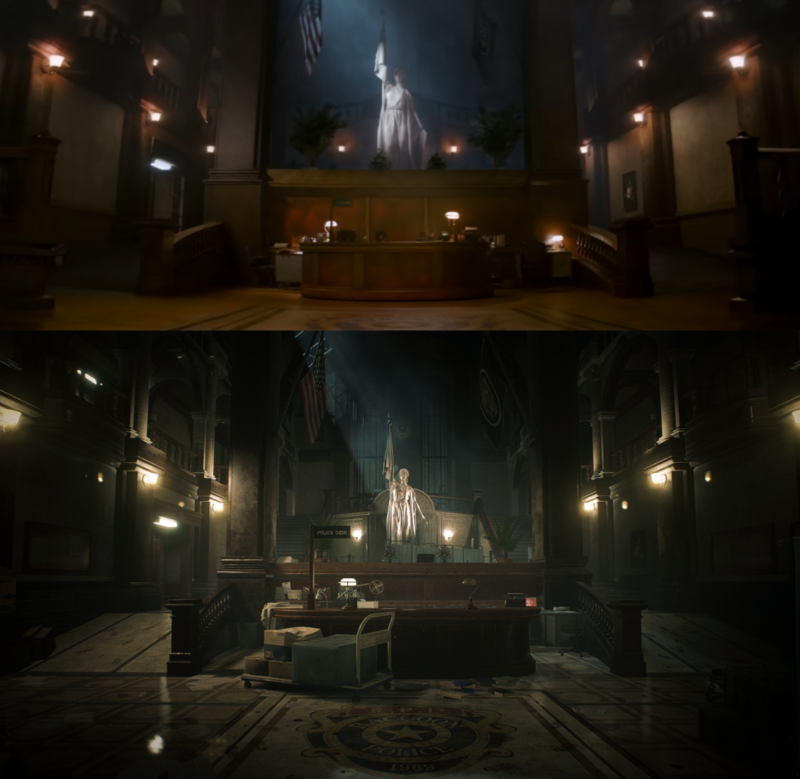 Here, we finally get a full view of the R.P.D. Front Hall. We’ve seen chunks of it a piece at a time in previous trailers, but this is our first look at the full room. God damn. You can also make out that the painting on the right side of the frame is game accurate as well.

Next, we get a comparison shot of Leon’s embarrassing “WEL COME LEON” sign (again, behind-the-scenes footage, as crew can be seen in this shot) and the Itchy Tasty writing from the original trailer. Following that, we get a new shot of Claire and Leon outside at night, with Claire calling out “What are we doing here?” before reacting to a shot of Raccoon City Orphanage’s entrance gate. We then get a slew of reference shots, such as a close-up on the typewriter in the R.P.D. Front Hall, a green herb in the mansion (which was already teased by Chris’s actor, Robbie Amell), and even the full set of R.P.D. ‘house’ keys. Small little details go a long way to helping to sell a universe as believably the one from the games, and it’s really fun seeing this movie trying so hard with this.

That’s all for now (the rest of the teaser is just shots from previous trailers), but there’s bound to be more in the lead up to Resident Evil: Welcome to Raccoon City‘s release on the 24th (December 3rd for EU).