reHorror: The 4th Survivor… in Red 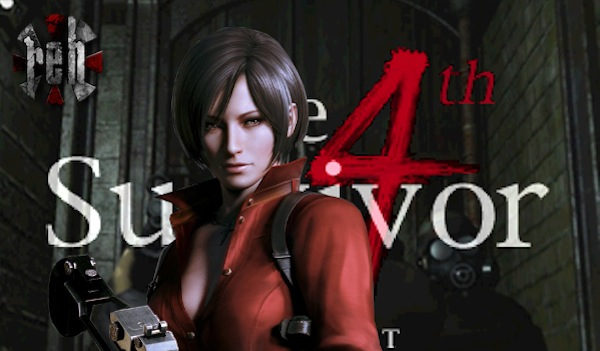 I know what you may be thinking: Another reHorror column focused on Ada? Well, with all the recent rumblings pertaining to Resident Evil 6’s rumored fourth scenario, I just had to talk about Ms. Wong yet again.

It all started when IGN reported that Resident Evil 6 would indeed house a fourth scenario– that won’t be playable initially. Whether it would have to be unlocked upon completion of the other three scenarios or whether it would be reserved for DLC purposes is still up for speculation, but having a fourth scenario just makes the game an even bigger beast.

Then, just recently, E3 Insider held a video interview with Capcom’s VP of strategic planning and business devlopment Christian Svensson. In it, Christian stated how the game would have, you guessed it, “four campaigns.” After contacting Capcom to clarify this, I was told that by “fourth campaign” he was referring to the game’s Mercenaries mode. So, four modes, not exactly four campaigns. However, it’s still safe to expect a fourth scenario in Resident Evil 6, taking IGN’s report and Capcom’s upcoming RE6 reveal on July 5th (according to Famitsu) into consideration. For now, we’re just left with speculation. So, let’s do just that! 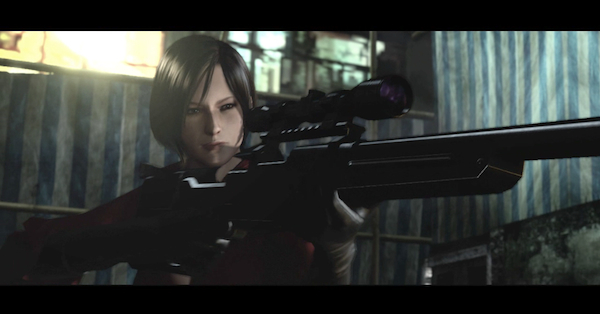 Co-op is the name of the game when it comes to all of Resident Evil 6’s main scenarios, but I think Ada’s will actually be more traditional in the sense that it’ll be a pure single player experience. This could be the main reason why it’s being saved for post-completion, or maybe even *gulp* DLC. This would be quite a neat reward for players who’ve conquered all three campaigns, by getting a single player campaign to go through without any AI partner tagging along (or a human-controleld one, of course). And what’s more, you’ll get to play as Ada herself– the real one!

Ada’s scenario in Resident Evil 6 could play out like Separate Ways did in Resident Evil 4. And we may have already seen bits of her campaign with the game’s E3 trailer– like the part where she’s aiming at Jake and Sherry with her sniper, while the pair is going about their own mission. Of course, Ada’s scenario will be all about the events going on in the background of the main story arc (with its three interconnected stories), and we’re going to possibly even be aiding some of the characters without them even knowing it in their scenarios– especially Leon.

I don’t think there’ll be any bell-ringing here, but we can safely expect Ada to possibly save Leon a few times during the game. Hell, I also wouldn’t be surprised if Ada throws Leon another rocket launcher during the final boss battle– a battle that could be against a mutated Ada “clone.” Everything won’t be strictly behind the scenes with Ada in her scenario, though, because judging by a scene in the E3 trailer pictured below, she could run across many of the other main characters on her own quest to destroy her evil “clone.” 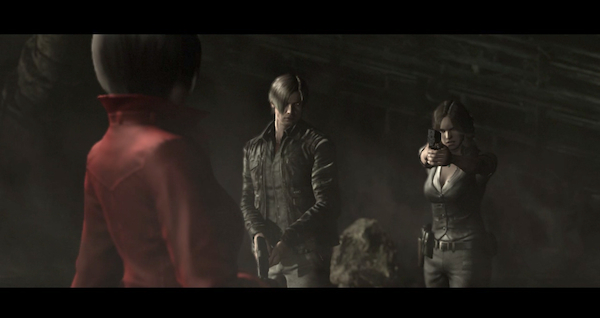 Ada isn’t going to be too happy when she finds out that she has an evil “clone” running around, promoting Simmons’s Neo- Umbrella and bio-terror at a global scale. And like I mentioned in my giant E3 preview/analysis, I think Ada may play nice with Simmons at first, so she could get all the intel she needs, before setting out to make him pay for what he did, possibly even bringing down Neo-Umbrella before it could even reach the original Umbrella’s global prominence.

We already saw Ada come across some files and photographs relating to Carla Radames and her involvement in a special experiment that may have been Ada’s replication process which revolved around the use of the C-Virus. As it’s been speculated by many, Carla Radames could actually be the Ada “clone” we’ve been seeing in the game’s trailers, dressed in blue as opposed to the real Ada in her red outfit. Capcom was pretty clever with this, stating that the woman in blue was a mysterious character while outright officially revealing the more familiar looking Ada as…Ada.

Perhaps that’s the main reason why all three scenarios will have to be completed before being able to tackle Ada’s: Capcom doesn’t want the plot’s big twist to be revealed right away. The big twist is, of course, relating to this whole “clone” business. Throughout all three campaigns, players may be led to believe that there is indeed only one Ada and that she’s become this evil global terrorist hellbent on covering the world with the C-Virus fog. Then, after seeing the big revelation that she’s in fact a “clone”, we’ll all realize how the other Ada, dressed in red, was the real one all along. Hell, maybe we won’t even see the real Ada that much during the three main scenarios, and the majority of what we’ve been shown of her in the game’s E3 trailer may have been scenes extracted from her unlockable scenario all along– save for the scene where she’s see speaking with Leon and Helena, of course. 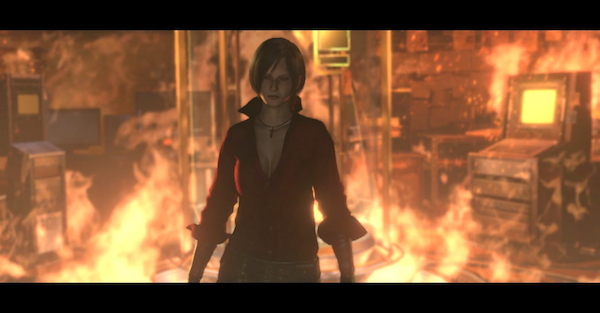 Another thing I’m expecting is much more confined areas during Ada’s scenario, as opposed to the big wide-open areas from the other big three campaigns. I still think Ada will be journeying through Tall Oaks, China and Europe, but her adventure may find her in more traditionally enclosed areas, like facilities and labs– like the one we see her in during the E3 trailer (pictured above). Ada may not want to be all out in the open as she tries to take down Simmons and Neo-Umbrella, along with her evil “clone,” so she’ll have to play it smart and infiltrate key locales, taking on whatever BOWs may stand in her way, that just can’t be avoided.

Out of all the scenarios, I truly think Ada’s could end up being the most traditional, with scarce ammunition and health supplies as players might have to opt to just avoid enemies altogether instead of engaging in combat, trying our best to remain in the shadows, and then you also have the extremely likely possibility of the scenario being a complete solo experience to seal the deal. So I’m not really expecting giant boss battles like there’ll be in the other campaigns, but I am expecting confrontations with Ustanak that may be a little more terrifying here as we’ll have to try to avoid attacking the BOW directly. And I think it would be quite awesome to have occasional run-ins with the Ada “clone,” in moments that could play out like the SA-X encounters from Metroid Fusion or even the Dark Samus encounters from Metroid Prime 2 (for comparison’s sake…yeah, I love Metroid).

What do you guys think? How would you like Ada’s scenario to be? Sound off in the comments below and be sure to stay tuned for the big announcement coming on July 5th! Also, get your PlayStation Move controllers ready, because the next installment of reHorror will be my official review of Resident Evil: Chronicles HD Collection ,which lands exclusively on the PlayStation Store this Tuesday in North America.