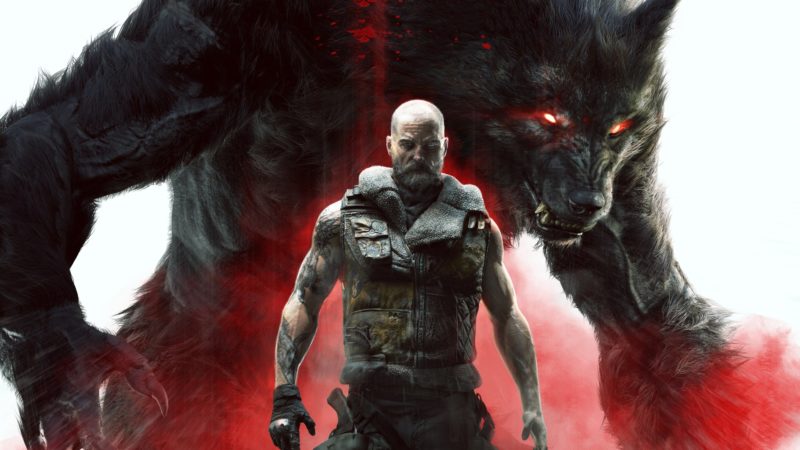 Over the past several years, the World of Darkness license has enjoyed a resurgence after a good long while out of the spotlight thanks to the brand’s acquisition by Paradox Entertainment. Mainly thanks to the Vampire: The Masquerade arm of the brand, we’ve seen multiple titles drop across a variety of mediums, with more on the way, most notably Vampire: The Masquerade — Bloodlines 2. While my excitement for that title remains strong, I will say that my confidence in the World of Darkness’s viability in the medium of video games has been shaken. Thus far, the latest entries into the World of Darkness video game pantheon have been, to be frank, mediocre at best and vapid at worst. So is sadly the case with the long-in-production Werewolf: The Apocalypse — Earthblood.

For the unfamiliar, Werewolf: The Apocalypse is the diametric sister franchise to Vampire: The Masquerade, showcasing shape-shifting humans called Garou (aka Werewolves). While the Kindred (aka Vampires) leech off of the earth and its inhabitants, the Garou seek to protect it, doing battle against cosmic forces that threaten the planet — chief among them the Wyrm, an eldritch force that seeks to corrupt and destroy all. It’s a pretty fun take on what I’ve often found to be one of the more boring “Universal Classic Monsters” out there, and Werewolf: The Apocalypse — Earthblood’s effort to capture the universe’s lore is something that I very much have to commend. Sadly, the same cannot be said of the majority of this game’s 10-hour (or so) experience.

Where to even begin is as much a problem as anything else to do with this game, as the list is unbelievably long. Sticking with talking about the story, we step into the shoes of Cahal, a member of an eco-terrorist Garou pack, who aim at bringing down Endron, a massive oil company that’s draining the earth’s blood at the behest of the Wyrm’s corruption. Cahal and his pack are upturned when Cahal’s wife is killed during a raid on an Endron chemical plant, and they set their sights on ridding the earth of the company once and for all. On paper, it actually sounds pretty intriguing, and it was one of the aspects of the game that I was most looking forward to. Admittedly, it does its best within the scope of what the game is capable of, but that sadly isn’t saying much. 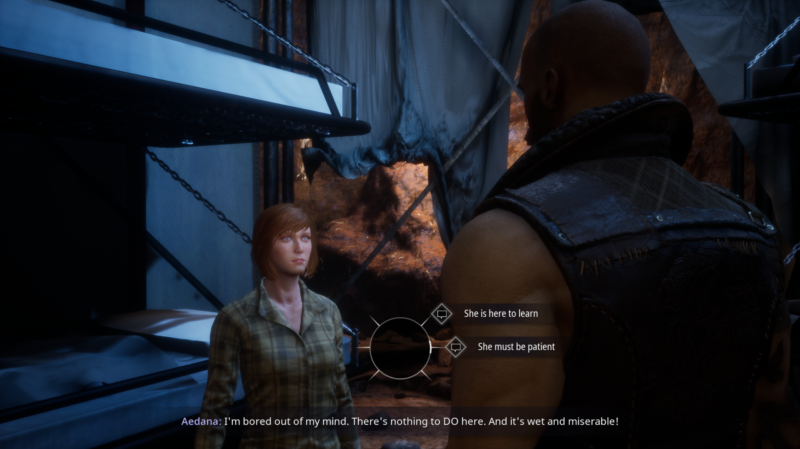 Cahal’s journey bears all the impact of a thirteen-year-old’s interpretation of “badass” after downing a big gulp of Mountain Dew and watching an edited for TV cut of Rambo 3. His wife dying in front of him; his hilarious masculine outbursts characterized as the Rage taking hold as he transforms — everything about him feels incredibly cookie-cutter. Cahal himself is a boring, Richard Marcinko stunt double looking dude in a leather vest, with little to truly characterize him outside of a general biker aesthetic. Along with this, there’s an uncomfortable Native American inspired culture hanging around him and his 98% white Garou pack, which smacks of a certain level of tone-deafness on the part of the developers or a total lack of self-awareness.

The lack of budget crusts over every aspect of this game’s presentation like a layer of flaking dust. Jumping in, you might be forgiven for momentarily thinking you had time traveled back a decade or so, as the presentation of Earthblood is so shockingly outdated to the point of being jarring. The closest things I can relate it to might be a cross between 2009’s Terminator: Salvation and 2013’s Dark. Janky, drab, and budget are all key descriptors for this game’s ancient-looking visuals and bizarrely outdated controls. From the rough-looking character models to the funky 2010s era lighting, there isn’t a single aspect of Earthblood’s presentation that feels modern. It’s hard to believe this game is having a full boxed release on PlayStation 5, as it would’ve looked budget even on PlayStation 3. Major cinematics are pre-rendered as well, which looks unbelievably dated and noticeably lower quality than the game’s actual output and framerate.

Even playing on PC at max settings, I found myself stunned at how instantaneously the experience fell apart after the snazzy, expensive, and polished opening cinematic, which partly served as Earthblood’s pre-rendered trailer. The buck stopped at more than just graphics, as animation also suffers from some horrible jank. Character motion feels weightless in gameplay and cutscenes, and awkward hand-animated lip-synching makes every conversation uncomfortable and hilarious. Of special note is Cahal’s daughter, Aedie, who is described as being a teenager but is clearly an adult character model shrunk down (in fact, seeing my screenshots side by side, I think she actually might just be her mother’s model with different hair and shrunk down).

Beyond just the visuals, the gameplay never elevates much higher than dull and by the numbers. Gameplay is split into three main sections: dialogue, stealth, and combat, and the three don’t mesh together especially well, transitioning from one to the other with a significant clunk. 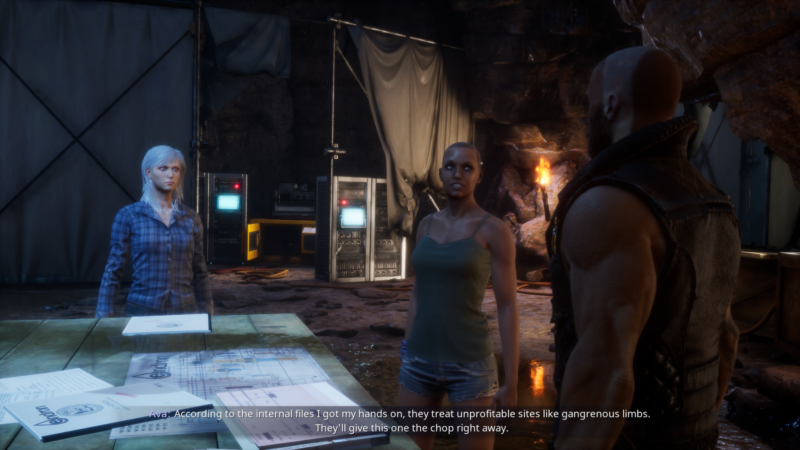 Dialogue sections have you converse with a variety of characters, making choices to set the tone of where the conversation goes and the kind of character your Cahal is. Frustratingly, many of the choices are vague and lack a proper explanation for the full brunt of whatever Cahal is actually going to spit out. An element I really liked here was the implementation of a “rage meter”, which grows steadily as people Cahal speaks with piss him off more and more. I never managed to get the bar to full (again, vague dialogue choices), but I presume it would result in Cahal going into beast mode. It is a neat spin on the idea of dialogue trees though, and I dug that about it.

Stealth is more or less useless and has zero repercussions for failure after the first chapter (which automatically gives you a game over upon being spotted). Chapter 2 onward, being spotted simply results in you being shot, which allows you to instantly transform into a full-on werewolf, after which point you launch into combat. I wish I had more to say about stealth, as there’s quite a bit put into it (you can turn cameras on and off, sabotage tech, snipe enemies with a cross-bow, etc), but the dominant strategy of just letting them find you then tearing the room apart left me feeling like any effort to go strictly stealth was more about avoiding combat than about successfully sneaking around.

That of course leads to talking about combat, which suffers from the same dominant strategy design problem. While your abilities in combat are varied (with two stances you can take that open up two different varieties of combat), there isn’t ever much reason to switch it up. Tapping your platform’s basic attack button and the dodge button is all you’ll ever really need, and it results in very dull combat. The entire first half of the game pits you against human Endron soldiers and mechs, which often feels caught between trying to make you feel like a badass werewolf hellbeast and also trying to actually offer a challenge. The middling road it chose to take ends up being a bit too easy all around. 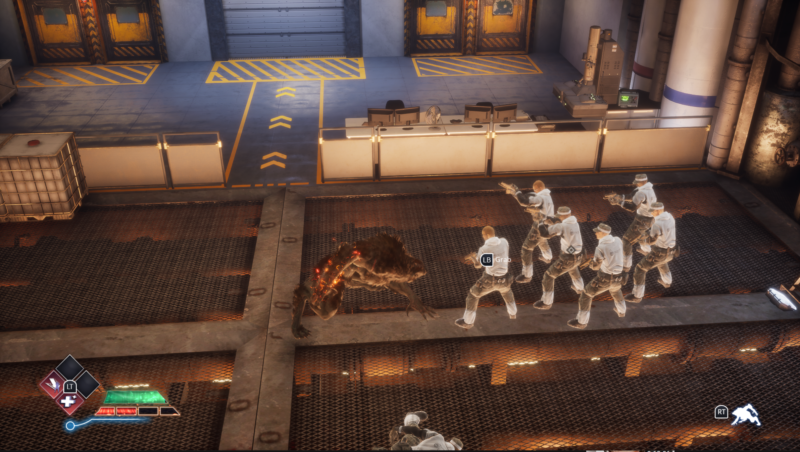 Loud butt-rock cranks up as you transform and start tearing into your opponents, attempting to sell the attitude of a beast finally set free from its cage. An attack dog let loose from its chain, allowed to take a bite just this once, that it’s okay to let the bloodthirst take over. Unfortunately, this attitude ends up coming off as nothing short of tragically pathetic, nudging enemy soldiers around the room and batting away at them with your big monster hands. Brushing up against wooden boxes and metal railings sees them fly apart like tissue paper, but the human enemies stand their ground firm to most normal attacks. The enemy soldiers have guns they fight you off with, but they give you much too large a window to dodge them in, and they have a bad habit of simply standing around and waiting for you to do something. There is an enemy type that uses silver bullets, which permanently shave off a chunk of your health for the duration of the fight (as in you can’t heal it back), but all you have to do is kill them first, and you’re golden.

Combat does pick up slightly in the latter half of the game, as you face off against a surprisingly varied set of mutated enemies. These are both much more interesting to look at, as well as fight, as they have powers and abilities that change combat up enough to become truly engaging. Considering their visual design so closely mimics Halo’s Flood type enemy, I assume maybe the idea was to mimic the scaling in enemy encounters that game has, but it only really elicited an “oh thank god” from me as I finally wasn’t just fighting white military guys in blue-grey office settings.

The weirdest aspect of combat, however, is the lack of dismemberment. Don’t get me wrong, I’m not saying that there has to be dismemberment in a game like this, only that dismemberment was clearly part of this game at some point. In your beast form, Cahal animates dismemberment actions — tearing arms out of sockets, biting the heads off of enemies, crushing their skulls underfoot. While there is a ton of blood, the bodies simply ragdoll rather than coming apart. It’s jarring and feels very kiddy, clashing with the aforementioned “unleashed” feeling the game seems to be going for. Even in the pre-rendered cutscenes, Cahal rips and tears at opponents only for that essential part of the gore to be held back. One sequence sees Cahal go to tear the jaw off of the rogue Garou that murdered his wife, only for the jaw to both stay attached as well as flop comically in on itself like something out of a Source Film Maker video. 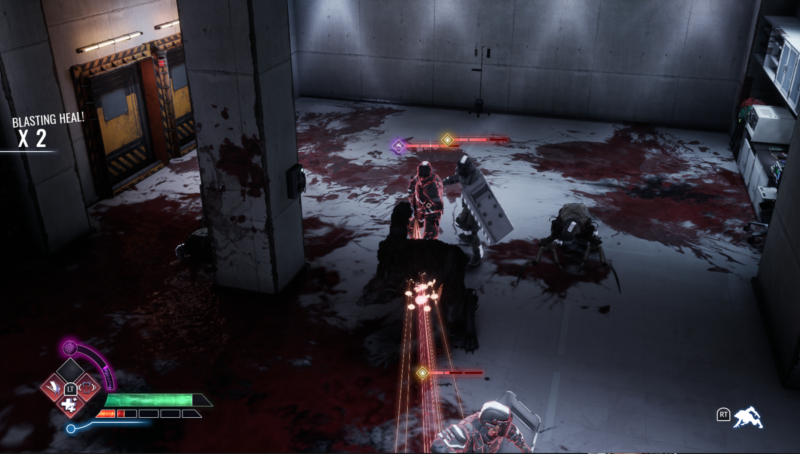 I can only assume that dismemberment must have been in at some point but pulled out at the last second either due to censorship or because it was too difficult to successfully accomplish. I’m leaning towards the former, as a boss fight later in the game sees Cahal face off against a human woman operating a mecha suit. Instead of violently ripping her to shreds at the fight’s conclusion, even censored as this has been, Cahal instead picks her up (in wolf form with his big monster hand) and drops her off a cliff into a bottomless pit like she’s a Disney villain. These decisions cause the game’s entire tone to trip over itself in an effort to both be “badass” and violent but also frustratingly restrained like they were afraid their mom might walk in and see what kind of game they were making. I actually reached out to the developers to see if there was an explanation I could include here, but I appear to have been ignored by the PR associate with whom I was in contact with.

Ultimately, all of this pieces together into a very low budget and vapid experience that struggles to move past the very worst of a console generation from over a decade ago. While there are a few things I liked here and there (the design of the local God Cahal communes with, Yfen, is actually amazingly cool looking), but overall you’d be better served playing just about anything else this quarantine season. This game sucks.