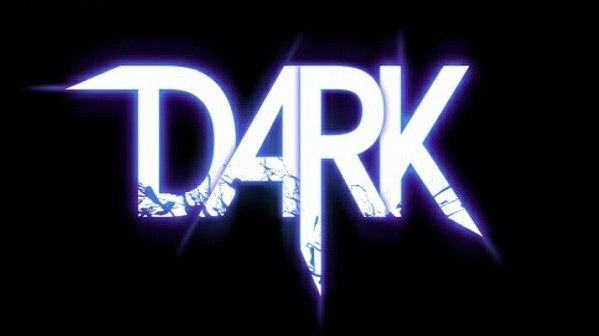 I hate giving a game a negative review. Although I can nitpick and rip apart a game for kicks, actually putting pen to paper (or…e-ink to…screen) to publicly advise people not to buy a game, makes me feel a little less than great. I think about all the work that people put into it hoping that it would be great. I see it like a student handing in an assignment at the end of the year. That assignment was his last hope and would mean the difference between repeating a grade and advancing to the next. I could let him pass.  I could.

That kid is DARK, and passing this kid isn’t doing anyone any favours.

DARK puts you in the shoes of Eric Bane, who has a rather perplexing problem – he’s dead. He wakes up in a nightclub to discover that not only is he dead, but he’s also a vampire. He also has no idea how he got to be in this state. Eric also is fond of narrating life events (or afterlife events) not unlike what you would find in a gritty old detective movie.

Those factors alone make DARK sound like the kind of game you would want to play. Despite the general threat removal that vampires have undergone in recent years, even if you knew nothing about the game, you might still want to pick it up.

At the beginning of the game, after Eric wakes up a nightclub, he chit-chats with a few people and finds out that he needs to suck the blood of the vampire that turned him into a vampire, or he’ll degenerate into a ghoulish animal. Or, failing that, he could just suck the blood of some super-old vampire. This exposition comes from some pretty terrible voice-acting. even Eric’s gritty Max-Payne-ish exposition gets annoying after a few…minutes. It’s not that the dialogue is terribly written, it’s just that the voice-actors just sound stiff and forced. 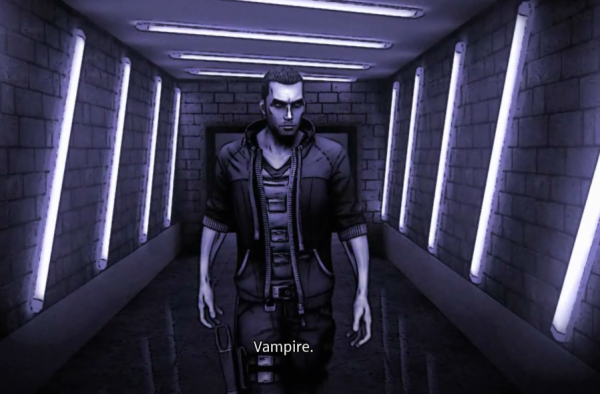 DARK’s graphics are passable.  The artwork is actually very nice, and I found some of the visuals with the purple hue to be very stylish.  However, every soldier I encountered, every security guard all looked like they had the same model. Pretty much, if they were the same kind of enemy, they all looked the same. And unfortunately, as passable as the graphics were, DARK’s animation ruins any kind of chance this game had of looking half decent.

Part of what Eric has to do is suck blood, so you would think that they would at least get that right. No. Eric grabs his opponents and holds their heads diagonally while he gets close to their jugular, but never actually touches them. You can see the noticeable gap, even as blood squirts out of their necks. The next step is to hide the body so you won’t be discovered, unless you’ve already been discovered in the time it takes to bleed a person dry. So you grab the guy’s ankles and are switched to a first-person view, in which while you are dragging, you cannot see anything else but the corpse’s feet as they jitter and shake, halfway between in and out of the game world. 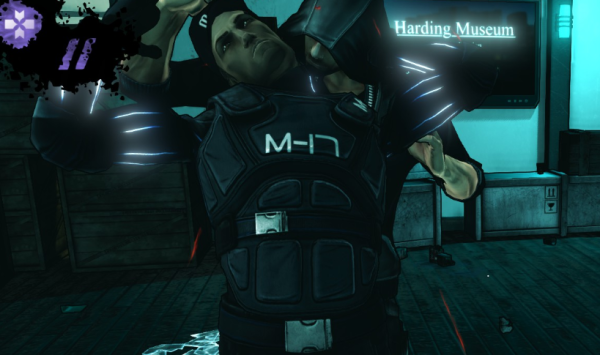 Stand stunned as I breathe gently onto your neck.

Other enemies will glitch into walls, or start frantically tap-dancing in place. If you happen to be lucky enough to throw an enemy over a ledge, their stomach develops a sticky substance and they stick to the ledge, allowing all enemies in a 100m radius to see them and immediately start shooting at you. This happened every time to me.

DARK’s enemy AI is about what you’d expect…for an old stealth game. The enemies walk in linear patrols and can only see a few metres in front of them. They supposedly can hear if you step on glass or other debris, but my enemies never heard me coming, not even when I crunched repeatedly on the glass. The game even plays into this by telling you that guards move in sync and advises you to time your moves accordingly. It’s almost as if the devs know the AI is shit and are just telling you flat out. The game attempts to make up for this by throwing dozens of enemies at you. Eventually it gets to the point where stealth doesn’t work anymore just because there are so many enemies, and you just have to go at it with brute force, or frantically run away from them to the next level.

I will say that the controls are incredibly fluid, though. Moving left or right, forwards or back results in an immediate and fluid response, even if it appears as if there is no animation of Eric actually turning around. You can get into cover easily by holding the right mouse button, unfortunately you have to keep holding it to stay in cover.

A unique aspect of the game are the different powers that Eric can level up. The game’s PR department calls them vampiric abilities. You can turn yourself into a shadow so the enemies won’t see you as well, or leap cover to cover…as a shadow. You can take out enemies from cover with a grip, or confuse them for a few seconds. Every time you use an ability, it takes away blood from you. You only have two blood slots (eww) to start, so the game advises you to upgrade them immediately. Use up all of your slots, and you have to acquire more blood, thus making more and more vampires. 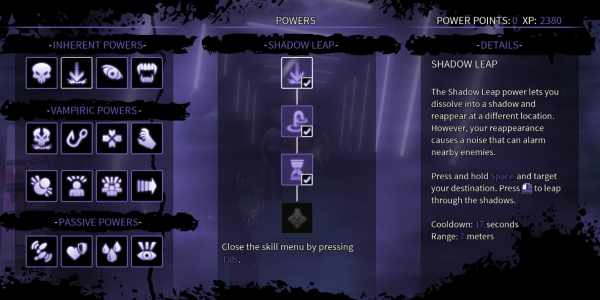 The upgrade system and all of your vampiric abilities

No. They all just stay dead. Well, perhaps that was an oversight?

If you’re really, really into stealth games, you might get a kick out of DARK. You also have to be a certain kind of person – the kind of person who enjoys punishment for reward. However, the story is a little on the mundane side, which makes all that stealthing and punishment a pretty unsatisfying reward.

DARK is currently available for PC at the bargain bin price of $40. You can do better on the PC for less than $40.  And you can do better, DARK.  I’ll see you next September.