Review: The Dark Pictures Anthology: The Devil in Me 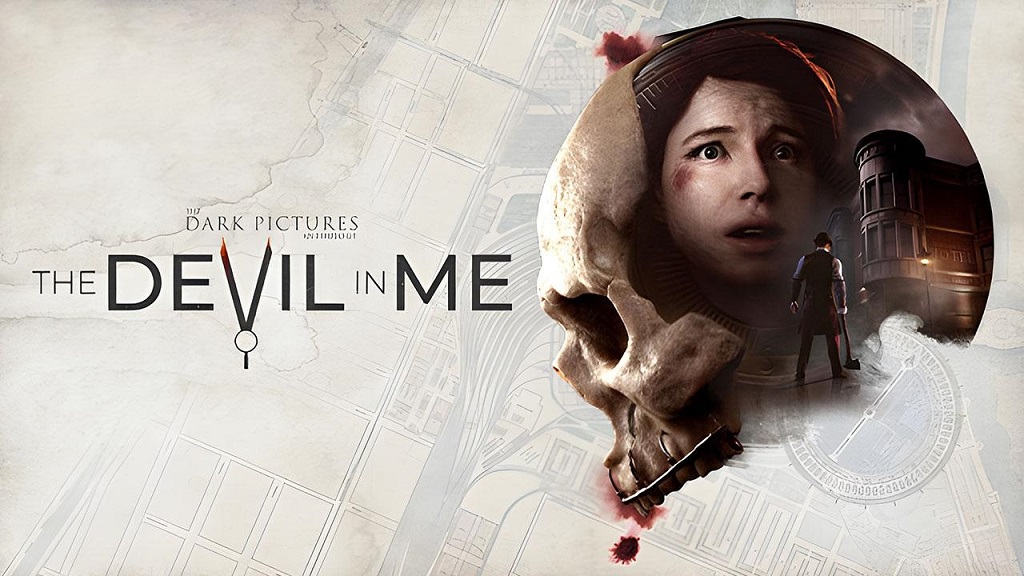 When SuperMassive Games‘ Dark Pictures Anthology started back in 2019 with Man of Medan, it showed a lot of promise and showcased a small step in a different direction from its pedigree and what they were able to accomplish with Until Dawn in 2015 but left a little to be desired in some areas. Three years have now passed and many changes have come along on the road that leads us to the Season One finale, The Devil In Me.

As the series progressed, we received two more games, with mixed results, with each exploring different settings and types of horror, but still never anything that quite captured the magic that Until Dawn had achieved.

Earlier this year, we also got The Quarry, and while not officially a part of the Dark Pictures series, it stuck with the same style of game, aiming for a little closer to the length and scope of Until Dawn, with a bigger budget than what Dark Pictures goes for. While The Quarry wasn’t quite the masterpiece we were hoping for, the final release for Season One of Dark Pictures is now upon us. After getting to play a preview of the game about one month ago, it was already looking to be the best in the series, so now we can see if it’s lived up to our hopes and expectations. 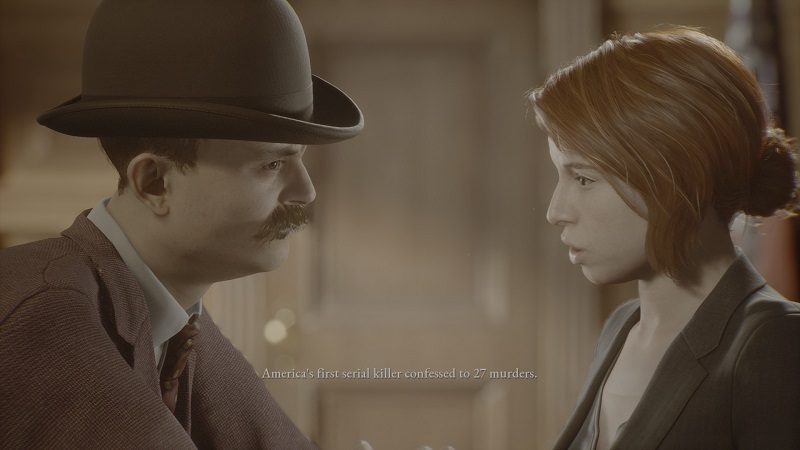 As mentioned in my preview before, The Devil In Me sets itself apart from the previous Dark Pictures games in many ways, including the nature of the story, the gameplay, the focus on tension and fear, and many more, and since these games have been so traditionally focused on story, that’s a good starting point.

To put it simply, The Devil In Me has the most grounded, well-thought, well-written, and impactful story of any game that Supermassive has made so far. The characters are well-rounded and have more realistic portrayals and dialogue than ever before, instead of just yelling or arguing with each other half the time and being stereotypes for the most part. It feels like the pacing of the story is tighter and more planned out than any of their previous efforts as well, while still having all of the hallmarks of their style.

It pulls influence from many different sources, including classic films (Psycho, The Shining, Saw,) horror and detective books, true crime documentaries and novels, other video games, and more, and uses every ounce of it to make one of the most captivating and well-told stories they’ve ever created. As a nod to the biggest inspiration for this story, the real-life story of H.H. Holmes, everything remains mysterious while still providing bits and pieces for the player to construct the story and figure out the mysteries themselves, without hitting you over the head with blunt and corny exposition. 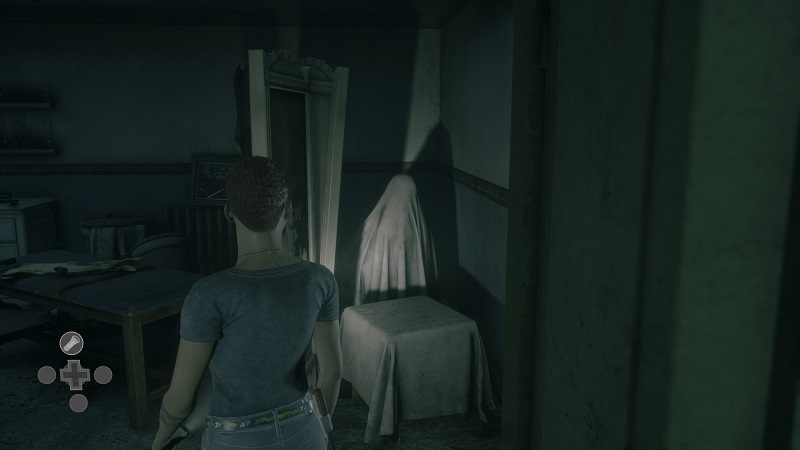 The Devil In Me also handles the nature of its story very differently from the previous Dark Pictures games by choosing to remain grounded in reality for the whole story without introducing any of the strange (and sometimes good) sci-fi or supernatural elements this time around. It instead uses things like serial killer mythology and historical context to twist the things you’re seeing and disorient or keep you guessing in similar ways to how the previous games used those “extra” elements to do the same. It does a great job of creating that same feeling of bewilderment and confusion without having to turn to things that are presented as “unexplainable” at first.

The story focuses more on the reality of a serial killer stalking and chasing his victims, similar to how Until Dawn gave that feeling of being inside a slasher movie of sorts, and it feels good to have that type of story without the supernatural elements clouding much of it. Even by the time the after-credit sequence rolls, you’re left wondering about many things regarding the killer and their motives, methods, and true origin in a way that feels creepy yet satisfying. It avoids the rushed or half-baked feeling that all the previous Dark Pictures games had (as well as The Quarry,) and puts itself right up there with or possibly above Until Dawn‘s story. 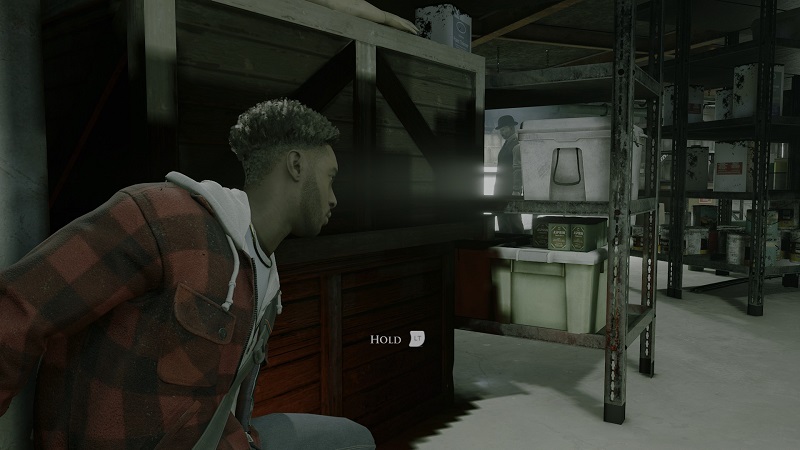 Moving on to the gameplay, The Devil In Me again stands high above its predecessors, mixing up the experience and providing more interactivity than previous Supermassive games, making for a much more exciting experience. Instead of an almost exclusive reliance on quick-time events and wandering around reading documents, Devil employs many more methods of play, including more meaningful collectible-finding and exploration, more fleshed-out cat-and-mouse stealth segments, environmental/traversal puzzles, an item/inventory system, audio tracking segments, and more.

While none of these elements are as robust as you’d find in game that focuses on those elements, they’re all present here as a “lite” version of sorts, but a little bit more of the interactivity and immersion goes a long way here. These elements all come together to make this feel more akin to your average Resident Evil, Silent Hill or Clock Tower game compared to the relative simplicity that these types of narrative-focused games typically offer. 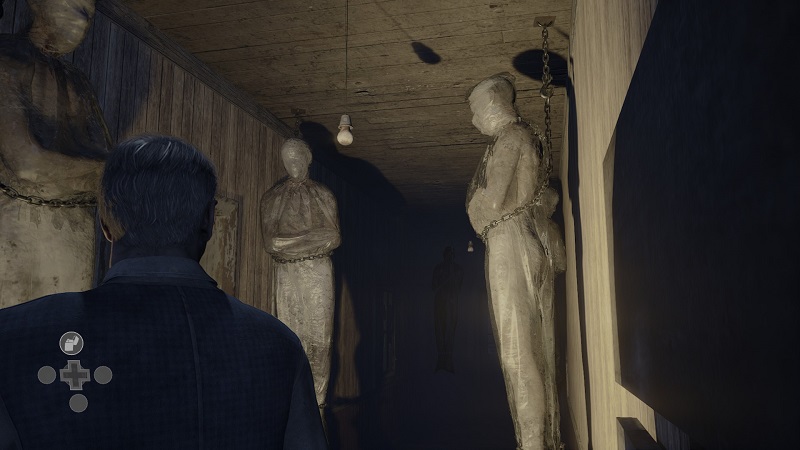 The setting for Devil also makes the experience a rather different one from the previous Dark Pictures games, where it focuses on the narrow, enclosed, claustrophobic hallways and rooms of the Murder Castle, making for much more tension and opportunity to freak yourself out compared to some of the more relatively open spaces in previous Supermassive games. This sprawling, labyrinthian environment really changes the game for the better and makes the feeling of dread and “survival horror” come to life.

Because of this setting, there’s a lot more opportunity for terrifying environments and jump-scares than ever before, and none of the scares ever feel particularly cheap or run-of-the-mill. The scares generally made me jump out of my seat nearly every time, and there’s a lot of them. This just heightens the on-edge feeling that permeates the entire game, always wondering when the next trap or appearance of the killer will pop up. 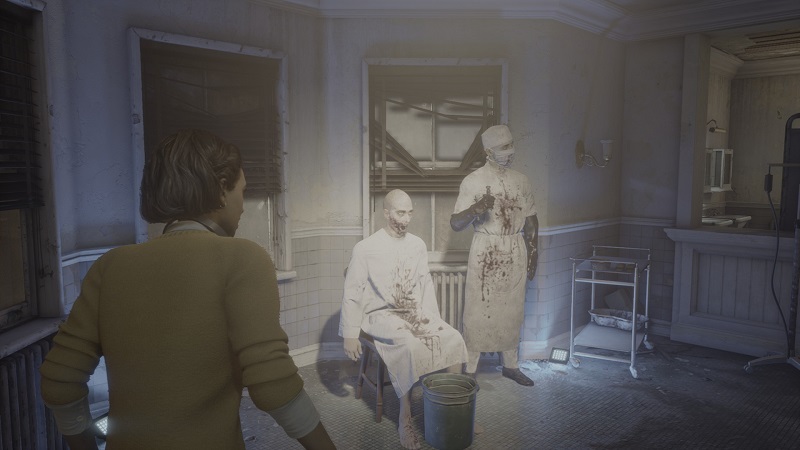 The balance of play between all the characters also feels much more diverse than in previous Supermassive games that tended to focus on and have far more play time for certain characters than others. This usually left the games feeling unbalanced when playing in a room with friends and I’m glad they finally found that balance. As usual, the Curator’s Cut and multiplayer modes can show additional scenes that couldn’t be experienced in a normal single-player run, and it’s all more satisfying than ever thanks to that balance between characters.

Aside from that, every character also feels like they have their own personality, not only in how they think, speak, and look, but also in how they play and the items and tools they have at their disposal. The unique item sets characterize them a bit further, not unlike horror classics such as Sweet Home, Resident Evil, or the ObsCure series, where a team of characters had to work together to survive the horror. Each character has their own items they carry with them, and each item has their own use, gameplay-wise, and this just keeps the gameplay fresher as you change between characters.

Every character also has their own unique light source they use to navigate the dark corridors of the Castle, from lighters to camera flashes, compact mirrors, directional mics, and more standard flashlights. This makes every character and every area they explore truly shine and showcases the very advanced and dynamic lighting the game engine offers. 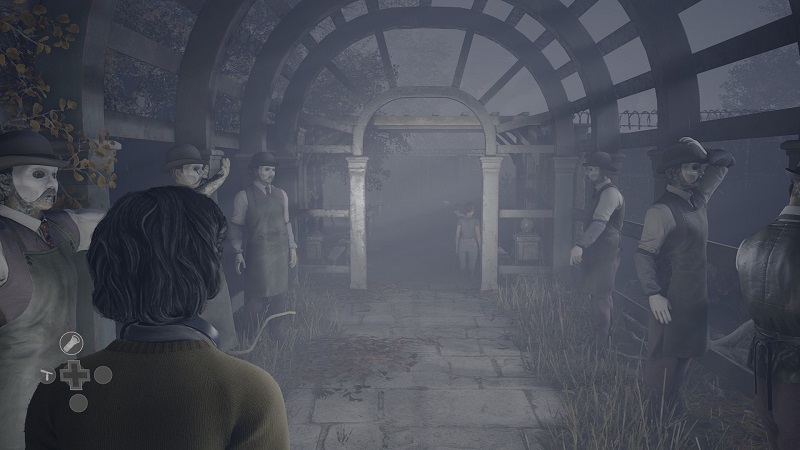 Speaking of the visuals here, they’re all top-notch and generally some of the best work Supermassive has ever done, from the twisting, dark corridors and moving walls of the hotel to the juxtaposition of some of the other more spacious or outdoor areas, every area has its own personality and is tailor-made for horrific encounters or scares. The lighting and shadow work on display are some of the best in the industry without a doubt, and it just makes the world come alive that much more.

Moving on to the sound design, it’s nothing short of masterful here and stands out as one of the most intense and impactful audio experiences in a horror game in recent years. Every place you encounter has an oppressive mix of startling ambient sounds, terrifying music score, creepy use of voice and animatronic or mechanical noises, and so much more, never letting you rest from an audio standpoint. Several scenes have audio so terrifying that I didn’t even want to move forward to complete the objectives and had to push myself to keep going, which is a rare and special experience that requires a lot of skill to pull off correctly.

Unfortunately, after a little testing on the console versions, the PlayStation 5 version is currently very behind where all the other versions are and has a number of performance issues that were due to go be fixed in a day one patch that did not go live on time, so you may want to wait a few days for a patch on this version before jumping into the experience. (NOTE: this has been fixed as of 11/20/22.) 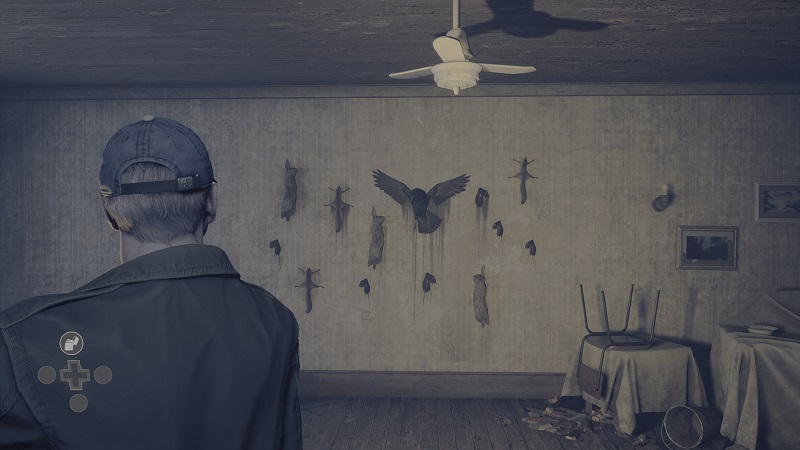 As for length, The Devil In Me clocks in at between 5-7 hours for the first playthrough with a fairly standard amount of exploration, and it feels like it hits a perfect sweet spot in between something like Until Dawn or The Quarry, which both felt a little too long and the previous Dark Pictures games, which often felt just a little too short. Its steady and clever pacing helps to scoot it along and make it feel just satisfying enough without overstaying its welcome and made me immediately want to do repeat play-throughs to explore more and see other story outcomes.

As far as extra content, there’s actually a better offering here than the previous Dark Pictures games, with a documentary film about the real H.H. Holmes included in the bonus features as well as interviews and behind-the-scenes content for making the game. As a new addition, there’s a new type of collectible in the game, in the form of small coins you find scattered around the world, and they act as an in-game currency to purchase some cool 3D dioramas you can view in the special features. The $40 price tag feels just right for what you’re getting out of the experience here and feels entirely justified in today’s market of $70 games. 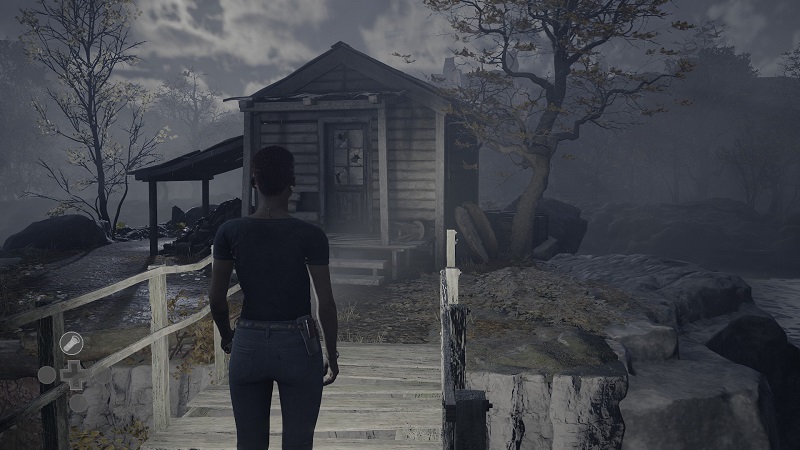 At the end of the day, The Devil In Me may be Supermassive’s best work to date, since it fixed almost all of the issues that held their previous work down and managed to round out all the edges extremely well. I hope they can continue to make experiences with a similar level of quality in the future and keep raising the bar of just how good cinematic horror games can be, but for now, this one is in high ranking for my horror game of this year this year.

A review code was provided by the publisher for the PC platform.