Review: The MISSING: J.J. Macfield and the Island of Memories 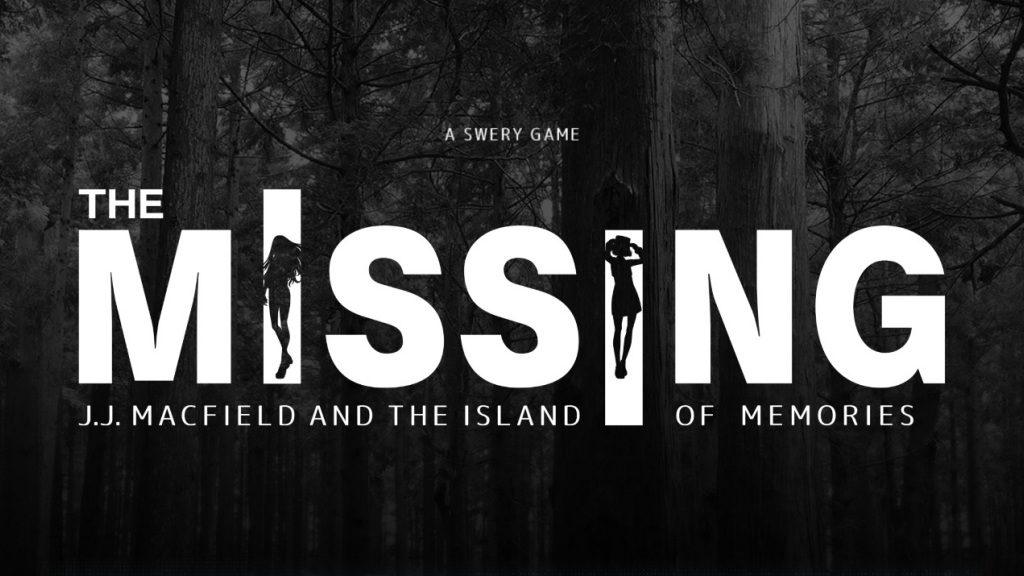 The MISSING: J.J. Macfield and the Island of Memories is a very different game from developer Hidetaka “Swery” Suehiro’s previous output. Rather than a surreal investigative thriller, The MISSING is a focused, introspective tale that takes players on a twisted journey of self-acceptance. While Swery’s trademark surrealism remains, The MISSING is a massive departure from his previous work, and its restrained scope and focus might make it his best game yet.

It’s clear from the outset that this is meant to be a very personal experience; The MISSING opens with a message to the player pontificating that everyone deserves to be accepted the way they are. What follows is a simple setup; J.J. Macfield and her close friend Emily have fled to a picturesque island for a camping trip. When J.J. wakes up and finds Emily missing, she sets out to find her friend.

From here, The MISSING takes on the role of a 2D side-scroller, though not one without plenty of surprises for platformer fans. While the exact nature of J.J. and Emily’s friendship is left ambiguous in the beginning, it’s a simple, and effective, starting point for an adventure that becomes much more complicated very quickly.

Soon after starting her search for Emily, J.J. begins getting text messages on her phone from F.K., an emoji-slinging stuffed animal. F.K. serves many roles throughout the game; he’s an intermittent companion and incorrigible annoyance, but he’s far from a villain. In fact, as the relationship between J.J. and F.K. grows, I found texting him to result in some of the best character building moments in a game full of quality examples. 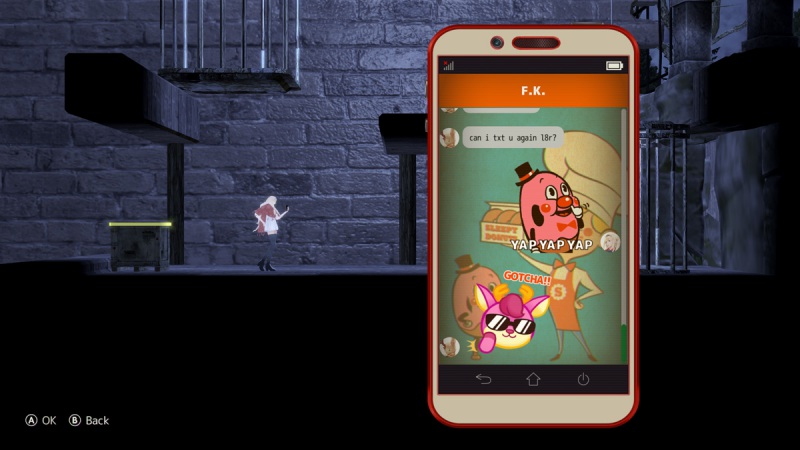 In an interesting bit of design, the phone J.J. uses is accessible at any time and allows players to explore an entire cast of characters at their leisure. As J.J. makes her way through the island, she will slowly recover text conversations she had previously with parents, teachers, and high school friends. While it’s easy to miss these conversations as they unfurl, I highly recommend taking the time to read them; the fact that an entire cast of characters can impact such a personal story without ever being seen or heard is a testament to the strength of The MISSING‘s storytelling.

Storytelling is the core of The MISSING. While the platforming gameplay is strong and varied enough to keep a players interest throughout, it’s not all the game has to offer. J.J. Macfield is a protagonist who gets some considerable depth by the time the credits roll, and she’s aided by an incredibly strong cast of bizarre, diverse characters. The story deals with gender identity and depression, yet manages to one that anyone can relate to due to the way it goes about handling its themes. As the game unfolds, it becomes clear how much of the gameplay is actually happening to J.J., and how much is an allegory about learning to love yourself.

The key to The MISSING‘s sincerity is that it isn’t afraid to get emotional. J.J. and Emily are relatable characters who aren’t relegated to singular emotions like most video game protagonists. Through The MISSING‘s relatively brief runtime, J.J. is sad, happy, depressed, calm, and so much more. She allows herself to be brave, to be vulnerable, and to be regretful in a way that can get sappy, but never contrived. Unlike other indie projects that try to draw tears from their audience, The MISSING isn’t afraid to be genuine about the subject matter it approaches, and is better for it, despite the odd line reading or joke that doesn’t land. It’s a hard narrative to talk about without spoiling, but it’s heartfelt in ways more games should be, but aren’t, and deserves to be experienced.

Around the time J.J. meets F.K., she also gets struck by lightning in a field and resurrected by an elk wearing a doctor’s coat. It’s one of the more surreal moments in the game, and also brings J.J. to the realization that, while on the island, she can’t truly die unless her head is destroyed . As it turns out, the island is infested with malevolent creatures like giant monkeys and doll-faced spiders, all of whom will obliterate J.J. at a moment’s notice. Accompanying them is a plethora of bladed and barbed-wire covered contraptions that J.J. must conquer. To find Emily and complete her quest, J.J. must repeatedly sacrifice bits of herself. 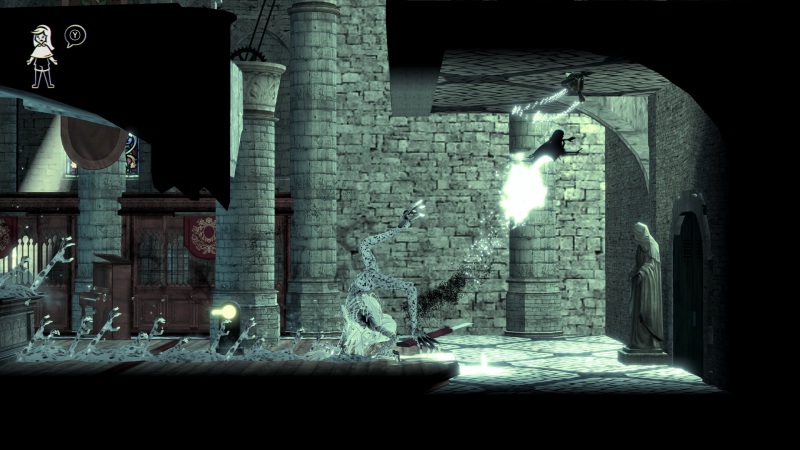 The most disturbing component of The MISSING‘s approach to violence is probably its sound design. Each slice or crunch of J.J.’s body makes for an eerie cacophony of pain and suffering. Wisely, however, that’s as far as the game wanders into exploitative territory. The 2D perspective is far out enough that, even when limbs are crushed and severed, the game never expects the player to be interested in the concept of violence itself, rather than what it means for solving the myriad of puzzles. For that, I am thankful.

The platforming itself should be similar to anyone familiar with Limbo or Inside; pulling objects in the world, clambering up ledges, and light physics-based puzzles are the order of the day in The MISSING. While platformers can live and die by collision detection and difficult sequences, The MISSING avoids many of the genre’s problems by giving the players a forgiving grab range for ledges and the ability to grow back J.J.’s body parts at any time. There are a few checkpoints that can be frustratingly paced, but for the most part, The MISSING managed to challenge me by using clever puzzle design, rather than my patience. 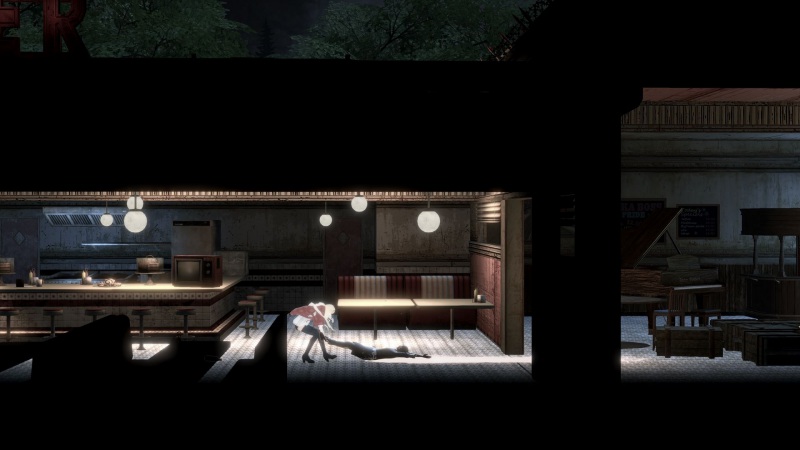 Which brings me to The MISSING‘s biggest disappointment; there aren’t enough puzzles. Over the game’s roughly five hour playtime, The MISSING does some truly innovative things with its puzzle design, playing with its expansive environments in interesting and consistently new ways. Just when I was getting a little bored with one kind of puzzle, another entered the fold. When I was getting bored with that one, the game turned the tables and combined the two. The MISSING is wonderfully paced, alternating between narrative segments, exploration, and puzzle solving, but by the end of my journey, I wanted to keep playing because of how satisfying the puzzles were.

The problem with that is The MISSING stands as such a wonderfully complete package as it is now. As a game, it’s very good. But as is often the case with Swery games, The MISSING should be regarded more as an experience. There isn’t one singular part players should focus on. Nobody should come simply for either the story or the gameplay; it’s one of the most cohesively bizarre, touching, and personal gaming experiences I’ve had in a long time, and it deserves to be appreciated as a whole.

The MISSING: J.J. Macfield and the Island of Memories is a new step in Swery’s creative output. Dealing with themes of self-acceptance, personal identity, and depression, it isn’t afraid to make mistakes or be genuine. The gameplay is great, but The MISSING is more than a great game. Minor issues with frame rate slowdown deserve to be mentioned but only occurred when loading new areas though never impacted my enjoyment of the game. It’s an outstanding testament to the power of the relationship between narrative and gameplay, and it represents a new high for Swery and his team at White Owls Inc.

Nintendo Switch review code was provided by the publisher.