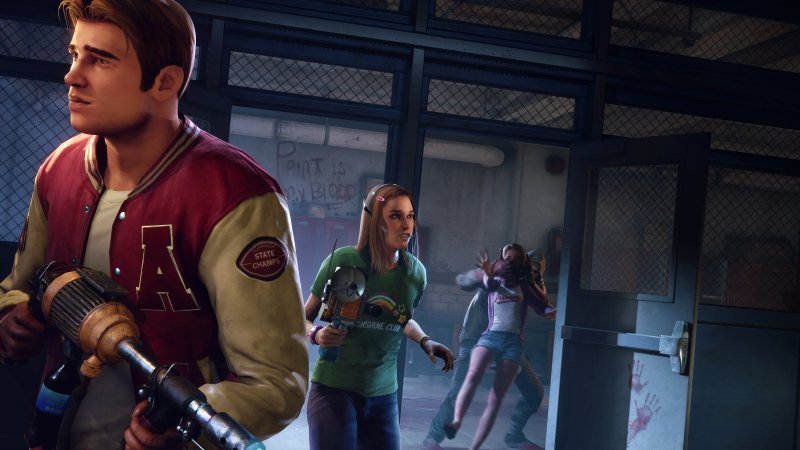 Slasher flicks have never been my cup of tea. The ritual of hooting and hollering as a masked psychopath disembowels some poorly written, annoying teens rarely resonates in a meaningful way. Championing the villain’s rampage over the protagonist’s plight is a narrative failure, in my eyes, but that’s generally the appeal of these movies — so I’m predisposed to revile Last Year: The Nightmare, given it’s a multiplayer take on the aforementioned slasher genre, on paper. In practice though, my feelings are quite the opposite, because the way it retrofits the slasher formula onto a competitive framework is nothing short of brilliant.

There are several asymmetrical horror games in the same vein as Last Year: The Nightmare already. However, the aspect of it that’s most distinct from the Dead-By-Daylights of the world is its use of classes. Survivors can choose from four in total: assault, medic, scout, and technician. They’re interdependent on one another, so poor team composition is sure to yield an easy victory for the killer. A scout might stun the killer long enough for the assault to bash them across the face with a lead pipe while the technician sets up a turret and the medic heals everyone accordingly. 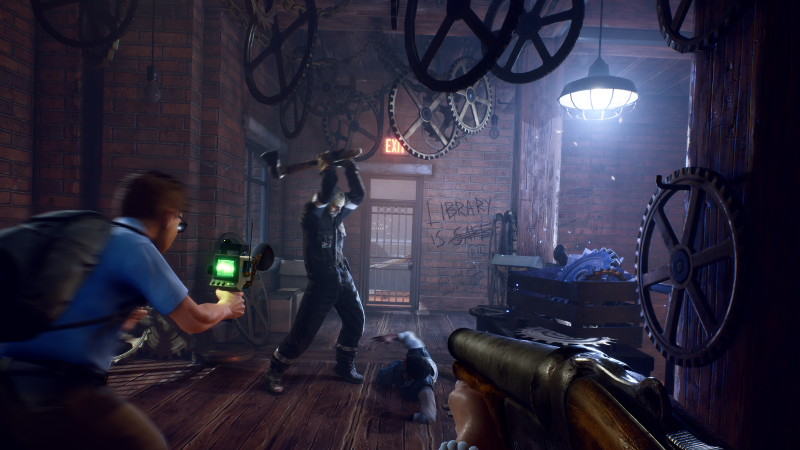 There’s a holy trinity-like synergy among the team of survivors that just isn’t there in other games of this ilk. Survivors that work together can execute an escape plan before the killer knows what hit them. Conversely, survivors that shun teamwork are likely to meet a grisly end. You know that old horror trope: wander off by yourself, you’re probably going to get killed? Well, that applies here too. The codependency of other players is never more apparent than when an ax is lodged in your forehead because you separated from the group. Friday the 13th and Dead By Daylight don’t encourage comradery like Last Year: The Nightmare does, in fact, in those games people tend to fend for themselves rather than do what’s best for the team.

An additional aspect of the game that sets it apart from its competitors is the clear amount of care that has gone into making the survivors a likable ensemble. I can’t help but love Chad, the meathead football player that can’t come up with a good quip to save his life. The writers leaned into Chad’s namesake, creating the biggest idiot fuccboi that’s somehow endearing. Craft a useful tool and Chad will feel superior enough to curse the shop teacher that gave him a C+. It’s not a necessary touch, but having an avatar with just that little extra personality made me connect with the cast more, and by extension, feel for their plight.

Unlike its contemporaries, Last Year: The Nightmare’s killers are not unstoppable. If they’re capable and work together, the survivors can easily murder the killer themselves. A crafty killer, however, will always find a chink in a team’s armor. There are currently three killers to choose from, each with their own distinct flavor and playstyle. There’s the Strangler, who uses a hook and chain to snag survivors from a distance and pull them in but is quite weak in melee exchanges; the Slasher, the axe-wielding jack-of-all-trades killer that’s apt for taking on small survivor groups in melee combat, but that has no special ability; and the Giant, who, as the name implies, is a big boy that can ragdoll survivors and tank a lot of damage but is also quite slow. 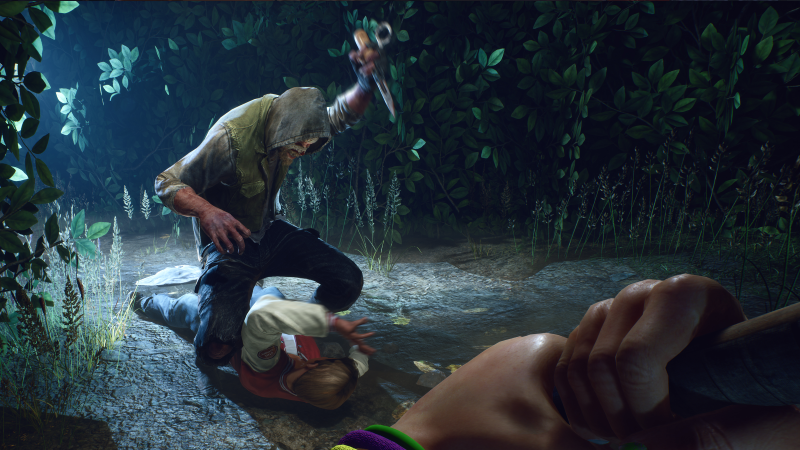 Whichever flavor of killer tickles your fancy, the predator mode is what survivors need to be most wary of. Predator mode lets the killer jet around the map, to place traps and observe the survivors as they go. When the time is right, they can materialize into their physical form and wreak havoc. For balance’s sake, a killer can only phase in and out of existence if they aren’t within the survivor’s line of sight. Many times I’ve seen a killer think they’ll dart in and thin our numbers, only to dash back out because they have the whole team of survivors after them like a Scooby-Doo chase scene.

Killers shoulder the burden of making matches fun, and unfortunately, cheap tactics can turn Last Year into a ‘nightmare’ for all the wrong reasons. Killers covering every surface with traps is an epidemic right now, and it forces the survivors to shuffle about, tediously disarming them non-stop. While you can just crouch over them, that strategy won’t help when a Strangler lines a narrow pathway with traps and spawns, and lassos your teammate from a distance, making it near impossible to save them in time. I won’t belabor this pitfall too much, but it’s worth addressing because this sort of behavior rapidly ruins the game. Please, Elastic, just add a cooldown on trap placement, or cap the number of traps a killer can have — that’s all I’m asking here.

What I like most about Last Year: The Nightmare is that it never wastes your time. Each map has a series of objectives that survivors need to fulfill to escape, and naturally, the killer is there to halt their progress. On either side, there’s clear direction with a goal to work towards. In the gym map, for example, survivors are to find gas to refill a motorized lift so they can escape through the building’s rafters. A well-executed plan will make missions last as little as five minutes or so, despite a maximum match time of 16 minutes. Better yet, if you get killed as a survivor, you’ll respawn in a broom closet where your teammates can rescue you. Similarly, if the killer falls, they will respawn as one of the other killers. Respawns alleviate that oh-so-tiring downtime that plagues other asymmetrical horror games where you just spectate until the next match starts. Death isn’t the end; it’s an opportunity to learn from your mistakes before getting back on the horse. 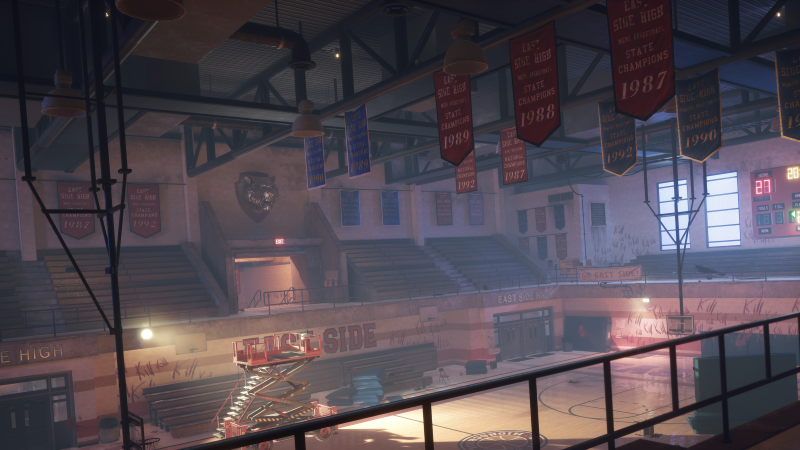 Crafting is another fresh concept Last Year: The Nightmare brings to the asymmetrical horror table. There are gathering materials called ‘scrap’ found throughout the map, and the more gathered, the more crafting options you have available in your arsenal. Gathering scrap is oddly cathartic, yet another factor that adds to the wonderful pacing of matches. After gathering 10 scraps, the assault class, for example, can add barb wire to melee weapons for some extra oomph to their melee swings. It’s not the sort of crafting system in which you’ll lose yourself amid flow cart recipes, but it’s satisfying nonetheless. Just remember to share some with your fellow survivors.

For as much as Last Year: The Nightmare nails its premise, it’s hard to shake the feeling that a lot is missing here. There are only three maps, five survivors, three killers, and no progression or leveling system. It’s also noticeably lacking tutorials, which is especially troubling given the obtuse natures of the different killers. The first time I spawned as the killer, it was a frustrating ordeal because I had no idea how predator mode worked. Practice makes perfect, of course, but there are a lot of not-so-obvious mechanics thrown at you all at once. Some basic tutorials could go a long way in alleviating early-game frustrating. 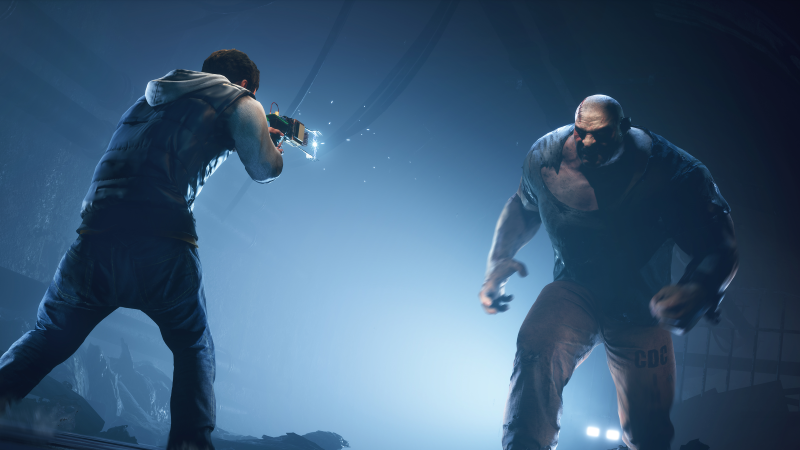 That said, the craftsmanship on display in Last Year: The Nightmare alleviates the minor issues, or at least instills hope that they’ll be addressed. Sure, there are only five survivors, but they have oodles of personality, more than what’s typically found in this sort of game. Similarly, while there are only three maps, they’re full of dense branching paths and secrets to discover; the level design is immaculate. Elastic Games has established a wonderful foundation to build on, and I’m sure they know exactly what fans want from future DLC updates.

Slasher movies may not instill adrenaline or fear in me, but Last Year: The Nightmare proves that with a shift in medium, the formula can work for even a cynical heart like mine. Plenty of asymmetrical horror games have tried to replicate 80s cinema’s dangerous game of cat and mouse, yet none have succeeded like this one has. It’s light on content, but what’s there is solid and a fantastic base to build on in future updates. Maybe rooting for the killer is still bizarrely self-indulgent, but Last Year: The Nightmare makes a solid counter-argument, all while brandishing a devilish smile.