Review: Friday the 13th: The Game 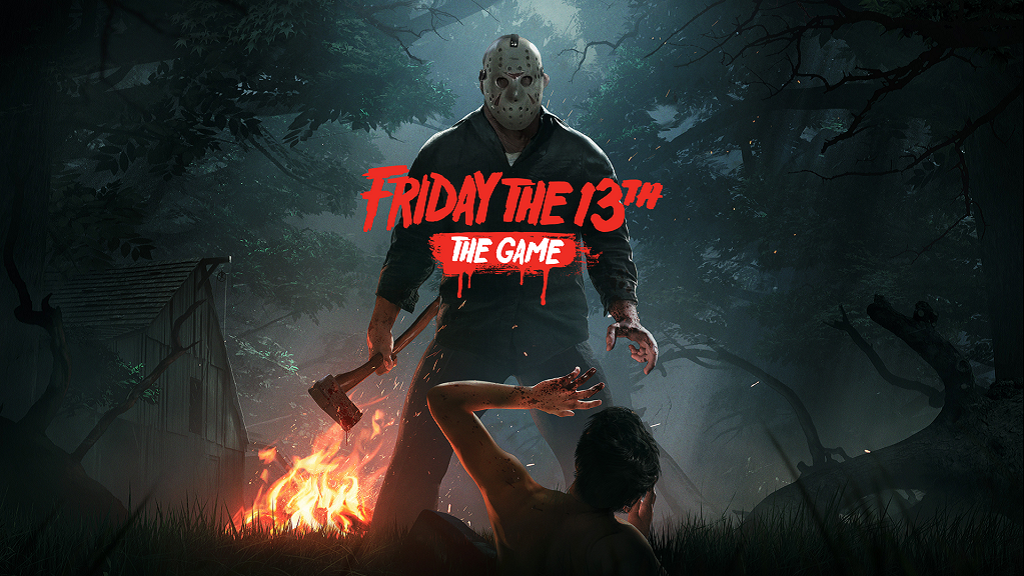 A seminal property in the slasher genre, the Friday the 13th franchise’s cultural impact can be seen the world over with many even who have not watched the films for themselves recognizing the iconic mask worn by the unstoppable killer Jason Voorhees. Created by Sean S. Cunningham in the 1980s, the series spawned to date a dozen sequels, tons of merchandise, comics, novels, and one critically panned 8-bit videogame for the NES. It would be nearly thirty years later until the franchise appears in the interactive medium again with the release of Friday the 13th: the Game (henceforth referred to as F13). My excitement for this game was palpable across this very site as I awaited what could be the multiplayer horror game I’ve always wanted. After some eighteen hours of play, does F13 swim to victory, or does it sink to the murky depths of mediocrity?

The basic premise of the films — watch teenagers try and not get killed by Jason Voorhees — is perfectly suited to a survival-based multiplayer game, and I’m incredibly happy to say that F13 pulls it off wonderfully.

[During the time of writing this review, the game was largely unplayable for many players. A bumpy launch plagued by server errors prevented players from finding matches or staying in them for a duration of a whole match. These issues seemed especially egregious on consoles. After the latest update, the team reports that less than 0.05% of players still can’t play. I was lucky enough to avoid connection errors such as these during my eighteen hours of play on PC. Had I personally experienced these major issues, they’d have factored into my review score. This review is focused on my experience with the game content itself.] 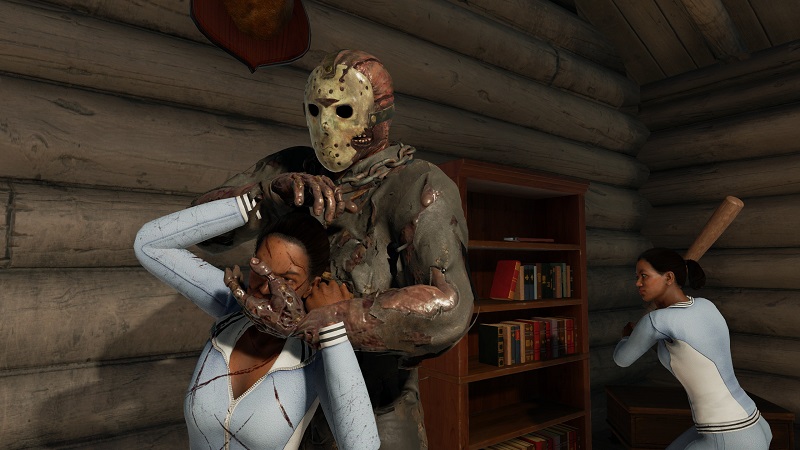 Publisher Gun Media and developer Illfonic distil the hallmarks of the Friday the 13th franchise into an asymmetrical multiplayer title that’s simply a counselor vs. Jason competition. The rules are deceptively simple: seven counselors must escape Camp Crystal Lake or its surrounding areas while masked killer Jason is in pursuit. Each of the ten available counselors fulfills an archetype based on Jason’s victims in the films and have matching practical gameplay skills — the strong jock, the nerd with repair skills, a stealthy punk rocker, the rich douche who can run away selfishly very quickly, etc. Each playable Jason based on his appearance in select Friday the 13th films have varied stat differences and a unique melee weapon.

Each Jason varies slightly in terms of their stats. For example, Part 2 Jason has a faster movement speed on land while Part 7 Jason can move in water the quickest. Abilities like Stalk and Sense can either be above or below average per Jason type, and some feature improved resistance or weakness to stun attacks from counselors. Each of the Jasons have a primary melee weapon, with different range and types of finisher attacks.

Matches in F13 are capped to a 20-minute duration where both the counselors and Jason have to complete their objectives. As a counselor, players need to complete steps to ensure their escape from the map, which can include repairing a car or boat by finding parts or calling the police to open up an exit. Counselors can additionally call Jason’s nemesis Tommy Jarvis (as he appears in Friday the 13th Part VI: Jason Lives) from a randomly spawned HAM radio, which revives only one deceased counselor as the character. Jason on the other hand has one gruesome objective: kill kill kill.

Up against seven other players, whoever embodies Jason for a match in F13 must utilize his special abilities to ensure as few counselors as possible escape the map. Jason has two abilities for short-range and long-range teleportation (to mimic the character’s knack to appear seemingly out of nowhere), Shift to detect loud or overly-frightened counselors and Stalk to silence your presence to approach targets stealthily. A late-game passive Rage ability comes into play as well which gives Jason a strength boost. 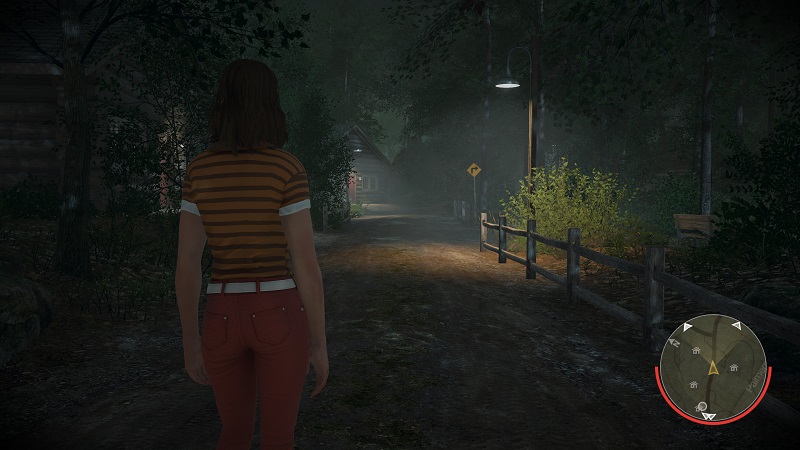 In addition to a melee weapon, Jason’s secondary resources are throwing knives and bear traps. For close range attacks, he can swing his weapon to harm his targets or grab them to allow for a finisher move. These types of moves are purchased using acquired CP points. Some of the finishers are tied to the specific weapon a Jason wields, for even more diversity in the types of absolutely brutal and hilarious kills Jason is capable of. Environmental kills add to his repertoire of death, meaning if you’re currently holding a counselor in your grasp while near a context sensitive zone like a cabin threshold, you can repeatedly slam their head between the door and frame. Near a gravestone? Mark it with a counselor’s gray matter! A window? Throw the trash out of it! There’s something for every occasion!

Playing as Jason is a sheer power fantasy, but this doesn’t mean he’s destined to win a match. Eliminating every counselor isn’t easy; the game is balanced so that you need to play as a calculated murder machine if you want the most points. Turning off the power, setting traps, and covering a lot of ground is a must to keep the counselors in a constant state of unease.

There’s almost an anxiety had while playing as Jason, as donning his mask brings along the baggage of living up to the expectations of such an iconic, unstoppable figure in slasher fiction. And when you honor his legacy (in virtual form only of course), it’s so, so satisfying. Kane Hodder returns to the role of Jason for the first time since 2001’s Jason X, bringing a distinct, tank-like body language via motion capture to the character that made Kane’s portrayal of Jason a fan favorite. 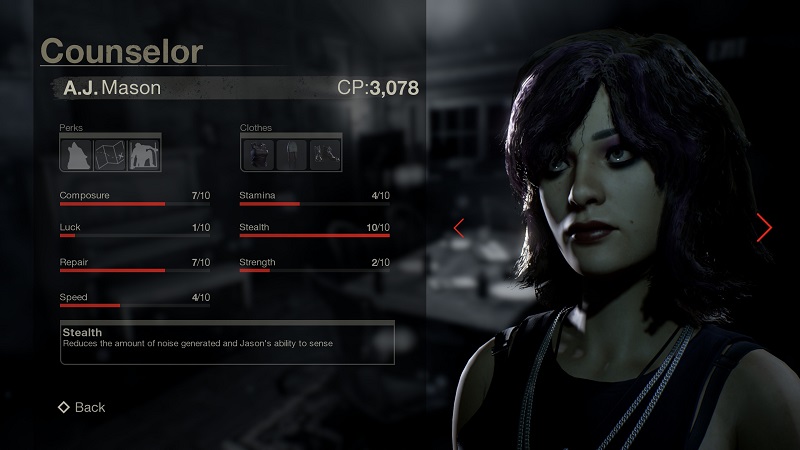 Each of the ten counselors can be customized further with stat-altering perks purchased with CP points. Rolling for a new perk can lead to duplicates but with better (or worse) buffs and nerfs, such as +15% to vehicle repair with -3% to stealth. I quite like this system as it adds an RNG element to player progression (aside from the level-locked counselors and Jasons) that doesn’t necessarily make higher level players better outfitted than others in a match. At the time of writing, server related issues caused the perk store to freeze up on occasion, though.

As a counselor, players can employ a few tactics to ward off Jason while they plot their escape. Doors can be locked or bolted, traps set, distractions triggered, and hiding places utilized. To properly survive, these elements needs to be put into play as well as management of one’s fear level that ultimately affects the odds of being seen and heard by Jason. Fear is affected by seeing Jason and his bloody handiwork. In my preview of the game’s beta, I noted that the game didn’t do enough to teach players about the fear system, causing everyone to run around like headless chickens — soon become headless teens. The game could do a much better job of teaching new players the intricacies of the fear system through a more involved tutorial. I still think this is true, but thankfully most players are catching on, and it’s less of an issue.

The rules for escaping the map are relatively simply: complete several potential objectives to unlock an exit. In speaking with fellow players and staff members of Rely on Horror, though, we all agreed that item spawns for objectives (keys, gas, batteries) could be tweaked just a tiny bit to avoid spending most of a match empty handed. 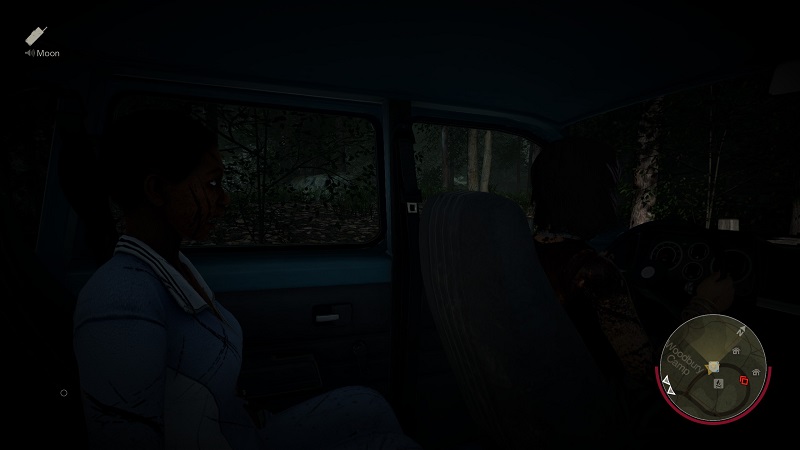 When it comes to interacting with the environment or other players, there’s still clunkiness that needs to be fixed. Opening and closing doors, for example, can be frustrating especially when in a rush as running through requires turning around entirely and moving into a sweet spot to trigger the action. As a counselor, using a weapon against Jason sometimes makes no contact whatsoever when it visibly did. Latency appears to be a culprit here as well, giving others noticeable advantages or disadvantages. Ping levels for players generally seem higher than normal across the board.

I’m a firm believer that multiplayer horror as a game genre can work. The element of fear can absolutely thrive in a multiplayer environment where there is permadeath. Games like Damned, Dead Realm and Dead by Daylight are all multiplayer horror games that I appreciate on some level, but none of them have gotten close to the consistent level of quality, fun, and terror that F13 achieves. Hearing the rising theme (by returning series composer Harry Manfredini) of F13 as Jason draws near excites as much as it terrifies. As just like in the films, those in Jason’s spotlight are overcome with fear and make mistakes, shortening their lifespans. 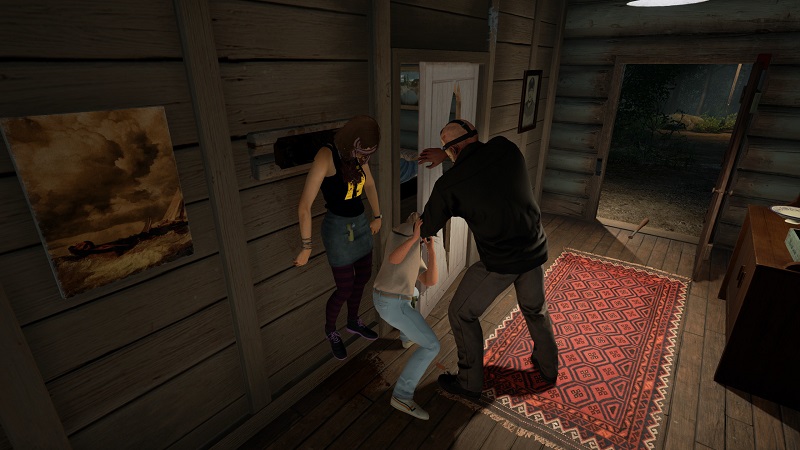 Gun Media / Illfonic have crafted an addictive and compelling homage to the iconic franchise, complete with all of the violence and goofiness fans adore. It’s been years since I’ve enjoyed a multiplayer game so much that I could play it for hours on end without breaks. Already ideas and hopes for how I’d like to see F13 grow as a long-lived multiplayer game fill my mind. New maps, Jason skins (original designs and licensed), additional functionality, and QOL improvements in addition to the already announced free single player update. In many ways, F13 feels like the foundation for more to come. I don’t say that selfishly, but as a someone wanting to see this game grow after such a great start.

While at times the clunkiness can get in the way, Friday the 13th: The Game remains a triumph. This is the absolute must-have multiplayer game for horror fans.