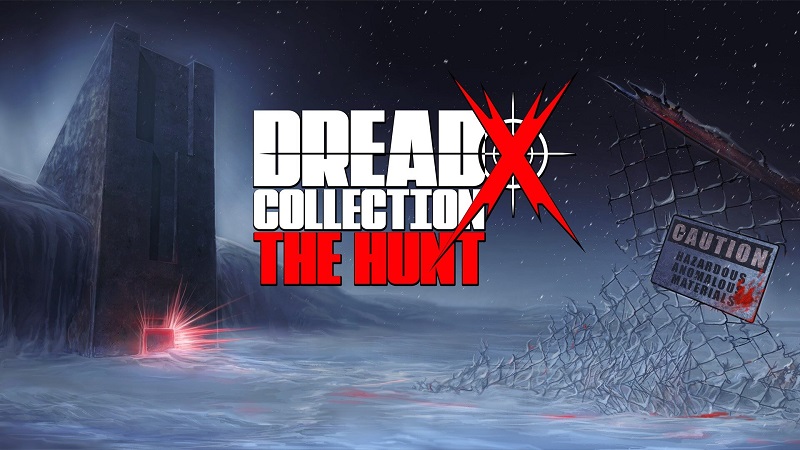 As a horror fan, one thing I try to keep in mind is the importance of supporting independent games and the studios that make them. Sure, not all indie horror games live up to our expectations, but all of them were made by small teams or individuals working to bring their creative visions to life. Dread X Collection: The Hunt is the latest entry in the horror anthology series that continues to celebrate such ambitions in one neat horror package.

Having only started life in March 2020, this newest installment of the Dread X Collection is already the fourth in the franchise. The title brings seven new games into the mix, incorporating them all into one overall plot.

Set in the abandoned research base ARK 2, you play as a tracker named Artemis who has been sent there to unravel a cryptic message. Upon discovering the place has been attacked and the inhabitants slaughtered, she takes on the challenge of unearthing what’s happened by exploring and unlocking the seven codes that house a secret weapon. This is where the other games come into the fold. 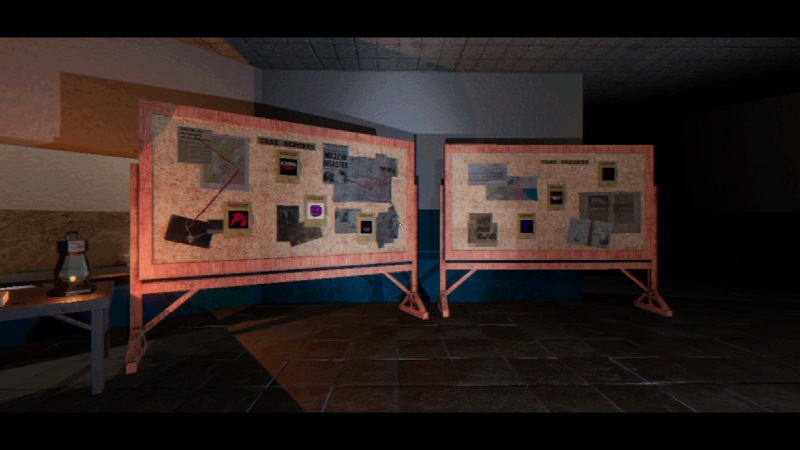 As you walk through the facility, you happen upon a noticeboard in the staff canteen area. Among other documents, seven folders are pinned to the board, each containing a separate game for the player to access, before the smudged code inside the folder can be revealed. You can play them in any order, and your only hope of unlocking the codes is to dive deep into the horror void that make up each independently crafted game. 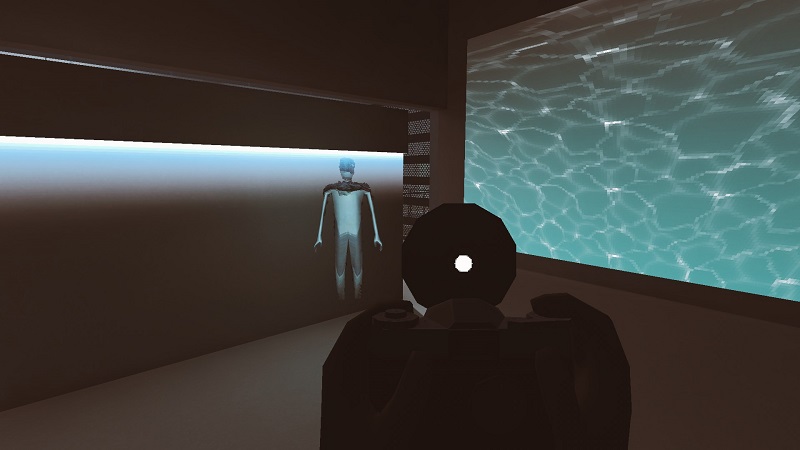 In this title, you are armed with a camera and play as a freelance ghost photographer who’s been tasked with capturing apparitions to hopefully cleanse an empty shopping mall of their presence. But it goes beyond that. As the story progresses, you find yourself taking several trips back in time. Still armed with your camera, you begin to unearth the meanings behind the haunting and the culminating horror that awaits at the end.

There’s a good chance some of you reading this don’t even need to play Axis Mundi to already draw comparisons between it and the likes of Fatal Frame (or Project Zero depending on where you come from). Weaponizing a camera against ghostly beings isn’t used too often in horror games, so although it’s tempting to dismiss the mechanic as a rip-off of the aforementioned Japanese games, aesthetically, the two couldn’t be further apart.

With Axis Mundi’s first-person perspective, intentionally bland textures that don’t draw the eye away from the action, and somewhat goofy looking spooks, the game adds its own flavour to the genre. It presents its own challenges and while it’s not a particularly scary game, it turns the act of photographing ghosts into an almost FPS experience. Strafe-circling is a must in this one. 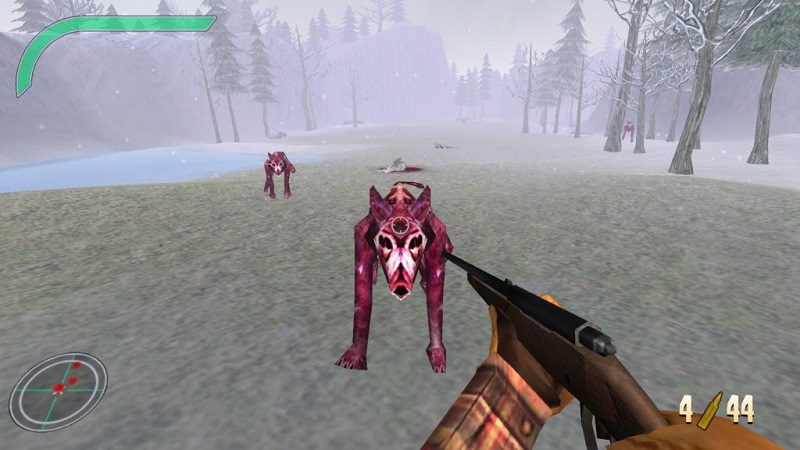 Another camera-based game, Utkena 64 attempts to shout back across the years to the mid-late 1990s, particularly as a love letter to the Nintendo 64 (hence the name). With its bold, 3D title screen, chunky text and even a mock N64 Expansion Pak loading segment, the game takes pride in referring to itself as a relic of past gaming. But those heady days of 64-bit reminiscing when friends would get together and play the likes of Goldeneye only go so far.

On the surface, Utkena 64 is a FPS set in the backwoods of the American South, in which the player takes on the role of a yokel looking to catch some game. Shooting turkeys and then taking pictures of them in this polygonal and somewhat foggy world yields some humurous lines from the protagonist. But this is part of a series of horror games, so there’s always that thought in the back of the mind that something is amiss.

As the levels progress, enemies become bigger and more numerous, going from small game, to wolves, to bears, etc. This is a game that quickly drops the cartoony overtones to deliver something more sinister. As the wild animals you hunt become more grotesque and demonic, the game becomes more challenging and despite his peppy outlook, the hunter you play as finds himself having to deal with something not even Elmer Fudd had to face off against. 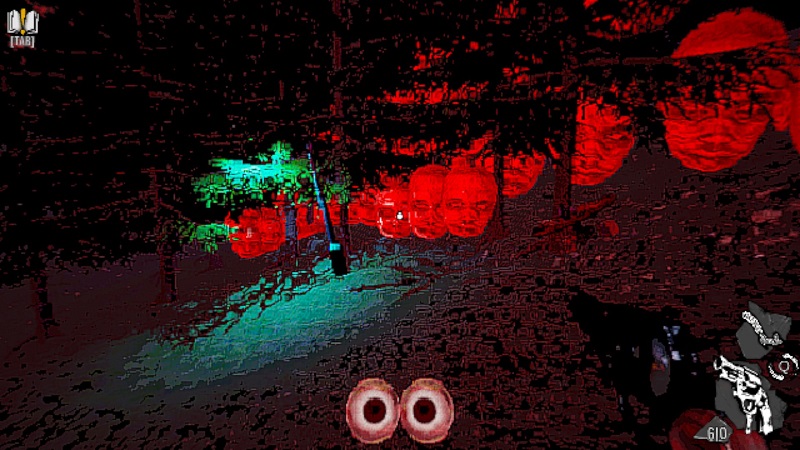 Yes, you are seeing that correctly. That is a series of giant baby heads emerging from the tress, in a visual style that I can only describe as “1970s prog rock video.” Rose of Meat is easily the most bizarre game on this list. The graphics are offset only slightly by the denizens of the world, from giant eyeballs that watch your every move, to red deformities that can be destroyed by shooting their barrels, all mushed together in a tale that centers around completing quests for the mad inhabitants.

The game straddles that very fine line between crazy for the sake of crazy and some sort of insane genius designed to freak the player out. In literary theory, the poststructuralist Roland Barthes believed that the author of a “text” was merely a conduit for language and not an explainer of it; that ideas are seemingly already around us and the things we read, watch, listen to or play are often subconsciously brought to the fore by its creators. If this is the case, one can’t help but wonder what influenced Mr. Pink to create a weapon that is a talking severed leg which, when shot, makes red goop grow on its victim. 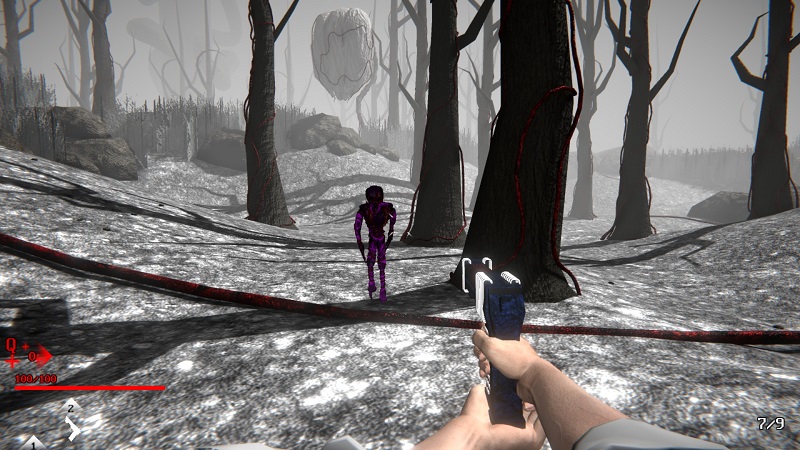 Receiving a letter from his lost daughter, afather seeks to find her at whatever cost. Beginning on the shore of a beach at night, you head towards a nearby boat anchored next to a lighthouse, as your daughter’s voice speaks into your mind about her whereabouts. Immediately, this feels like it’s going to be some standard horror mystery, but as the screen fades and we see our character climb down from the sky and land in a twisted forest, the mood quickly changes.

Seraphixial is a fast-paced action FPS which throws a series of deranged and freakish monsters your way. As you move forward, defeating swarms of these unearthly beings, you accrue weapons and ammunition for the ensuing battle you know is inevitable.

That’s not to say the horrors aren’t there. While the monsters are bizarre-looking, they’re easy to defeat, but the game quickly changes gears at various points, porting the player to even more eccentric locales. There are a number of jump scare moments as you approach who you think is your daughter, only for her to disappear and reappear suddenly. The game nicely blends action with some twisted narrative unveilings, never letting up for a second. Seraphixial is probably the most stressful game in this collection. 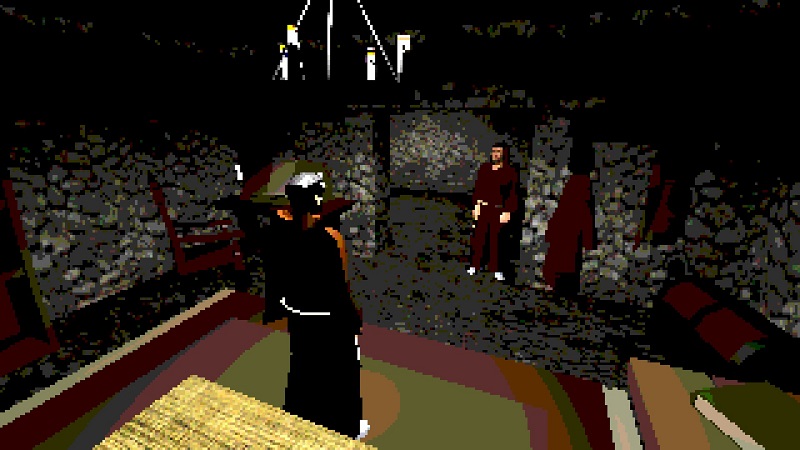 What these games – and indeed the Dread X Collection series on the whole – attempt to do is invoke a sense of nostalgia in the player, perhaps even in the developers themselves. As a nod to the past, they curry favour with those who remember the early days of PC and console gaming. Black Relic is no different, but a cursory glance may fool some people into thinking this is actually a game from twenty or thirty years ago.

With its third person viewpoint and almost 4-bit colour scheme, Black Relic is a game that wishes to do to a peaceful monk monastery what the original Alone in the Dark did for Lovecraftian horror gaming. Discovering that his brothers have been killed and the holy relic his sect has been charged with protecting is gone, you take on the role of a not-so-peaceful monk who seeks to find the ones who took the sacred icon and burned down his monastery.

Armed with a crossbow and healing powers, this is a third-person action shooter with darkly religious overtones. It almost juxtaposes the idea of the sedate monk who’s taken it upon himself to rid the place of evil by using violence. This is probably one of the most fun games in the collection with a lot of high-octane action. It’s a bit of a shame the reload and healing system is slow and tedious, because what this game doesn’t benefit from is a slow pace. 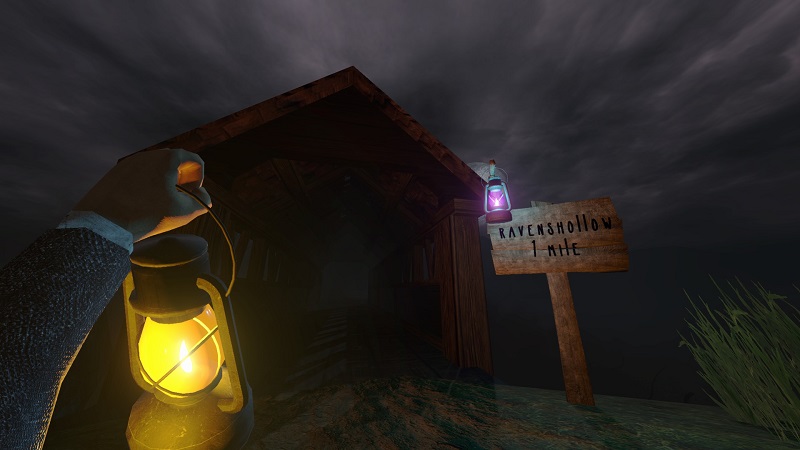 Dark cults are almost a staple in horror games. With mystery a-plenty, the game’s protagonist Thomas sets out to find the remote town of Ravenshollow after  receiving a letter from a loved one –  in a similar fashion to Seraphixial. Upon discovering a sinister local settlement where the villagers want to perform sacrifices on others, Thomas must evade the ritual nonsense of Ravenshollow’s cult in order to seek out his lover.

The most up-to-date looking game in terms of visuals, The Fruit doesn’t hide under some subtle veil in order to show you that this is a full-on horror experience. It has all the acoutrements of the genre: a nighttime setting, creepy locals, even a lantern which recalls the first Amnesia game. However, it also has a bit of a wonky control system. Any spook factor contained within seems hard to take seriously when the player-character seems to slide about in various places.

It’s definitely a more deadpan and serious game. While I found it very difficult to solve some of the puzzles (which ultimately leads to a bit of frustration), I was heartily impressed with the more realistic gun loading feature.

The House of Unrest (Dan McGrath) 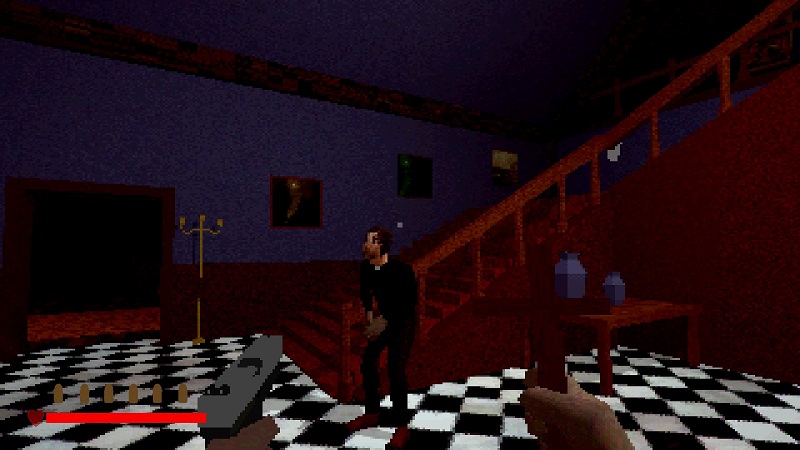 When it comes to horror stories about possession, The Exorcist is by far the most classic example in modern pop culture. However, what The Exorcist failed to include in its satanic story was the use of firearms. In contrast, The House of Unrest  arms its priest protagonist with his trusty crucifix and a pistol.

In the game, you must enter a mansion to perform an exorcism on an old priest who lies wriggling in his bed. Once performed, all hell breaks lose, as the place becomes overrun with demonic entities and strange goopy substances that block pathways. The House of Unrest is a story about the power of some divine presence, the spirit of religious brotherhood and kicking major ass like a holy Chow Yun-fat. Everything is wrapped up in a PS1-style aesthetic, which only adds to the charm of the game.

The theme of nostalgia is one I’ve already mentioned. But there’s also The Hunt segment of the game’s title. Each entry is its own depiction of some kind of hunt or search. From hunting demons, to looking for loved ones, to seeking the answers to mysteries, and even looking for game to kill, it all comes connected under numerous ideas that work seperately, yet go towards the big picture, which is celebrating the diversity of horror and the people that are behind it.

Dread X Collection: The Hunt crafts a smorgasbord of horror flavors, but does so in a way that’s in keeping with showcasing its independent talent, while also appealing to a specific horror aesthetic aimed at nuance and nostalgia. The main story is still a solid entrance to the overall playthrough, and has some impressive voice acting, even if the writing is a bit meh, but that’s not a major concern. The game doesn’t just tack on some plotline for the sake of padding out its stories. It may create a pretext for players to get stuck in with the seven other games built into it, but they all compliment each other in various ways.

A PC code for Dread X Collection: The Hunt was provided by the publisher.