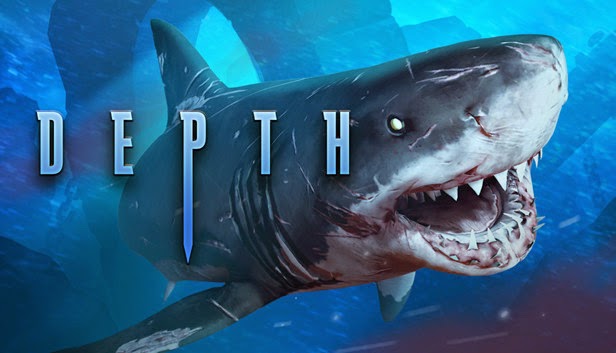 My fear of the deep, dark ocean has been well-documented on this site. One day a few months ago, in our super-secret-journalistic-Rely-on-Horror-dot-com-internet-cabal-Facebook-group, CJ mockingly linked me an article about Digital Confectioners’ Depth, an asymmetrical multiplayer game that pits sharks against divers. The joker told me I should be the one to review it, to which I replied “You’re an asshole okay I’ll do it” for I am nothing if not the most daring motherfucker in the land when it comes to virtual experiences that can’t physically harm me. Here is my tale.

I’m going to do this backwards and start with the bad since that’s what the game starts with: Depth’s UI kinda sucks. While the rest of the game is surprisingly fleshed out and mostly polished, the UI seems flimsy and not all that intuitive. Fortunately, the team has already stated that this is on their list of things to fix. Once you navigate through the labyrinthine interface, you get to the matchmaking, which is arguably Depth’s worst feature. Though some of the blame can be cast towards the low player base, you will frequently have to wait up to five minutes to find a match. As far as I can discern, there’s no way to tell if the host has gone AFK or not, so there have been many times that I’ve waited for more than ten minutes and just given up. Okay, bad stuff over!

The main conceit of Depth is the chance to take part in the long-standing war between sharks and scuba divers. Instead of an all-out deathmatch, divers explore various locations in hopes of retrieving large amounts of gold. The divers follow their little robot friend S.T.E.V.E. (Submersible Treasure Extraction Vehicle) to different locations while he extracts treasure. They are tasked with grabbing trinkets they find scattered about, hoping to eventually make it back to the boat so they can go to surrounding bars and purchase the mimosas required to scuba dive in shark-infested waters. Since sharks love gold and hate people, and therefore really hate people stealing gold, they have no choice but to attack. The sharks are so vicious that only two players occupy the shark team, while there are four on the diver team. Both teams have a set number of respawn tickets, and once either team is out of tickets (or the divers survive), the game is over. Simple enough, right? 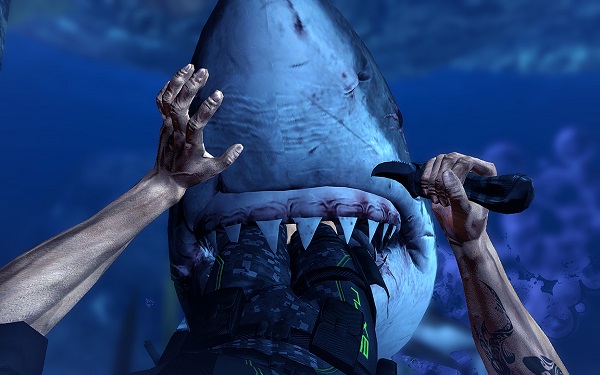 Playing as a diver is simultaneously comfortably familiar and disorienting. You move much faster than you expect (reloading weapons is hilariously fast, realism is not a goal here) and the controls feel just like any other first person shooter. However, the verticality that the underwater gameplay lends itself to is both liberating and terrifying. It’s like no_clipping through a Source game in that you can do whatever the hell you want, but there are hacker sharks no_clipping right after you. There’s a decent assortment of weapons that you can buy from between deaths, and each trinket, be it a crown or golden gun, will net you more cash to spend on said equipment. Weapons include harpoon guns, net launchers, and a diver propulsion vehicle that makes you a human torpedo. Not everything is purchasable from the start though, as there’s a persistent leveling system to reward skilled play. Though these tools may make you feel safe at first, you’ll probably die multiple times on your first try.

The sharks always know exactly where you are and are incredibly fast. My first dip into Depth had me only slightly uneasy until I swam a tiny bit away from my friends only to be violently yanked into the darkness, my torso locked in the maw of the fuckfish as it chomped down, dismembering and chummifying me. As with most horror games, once the Big Scary Thing happens once, you can calm down. My fear of the ocean is actually a fear of the unknown, which is why Ecco scared the little boy shit out of me when it started introducing aliens into its waters. Though there’s always a quick shock when you’re unexpectedly devoured, the terror has somewhat of an expiration date. That’s why it’s good that Depth is so damned fun to play.

While playing as a diver is fairly traditional, the sharks are where the real joy is at. You get to be either a Great White, a Mako, or a Tiger shark, and they all have their different advantages. Each diver you kill earns you one point to spend on “Shark Evolutions” ranging from the ability to detect mines from a further distance or increased health recovery. These evolutions don’t seem extremely effective on their own, but once you start stacking them up you’ll start giving yourself stupid names like Diverbane. You play from a third person perspective as a shark so you have more maneuverability and awareness than the divers do. While your only action is a lunging bite, this is enough to crash through walls, swim faster, and kill divers. If you’re able to bite a diver, you get to experience the best part of the game hands-down: thrashing the mouse as fast as you can to mutilate the diver before they can stab you in the face and kill you. CJ is physically unable to do this part without yelling “NUM NUM NUM NUM NUM” every single time, and I really can’t blame him. It’s a great mechanic in that you have to be quick and that it also feels more connected than every other action in the game. It seems like a silly gimmick at first, but it’s definitely my favorite part of Depth. 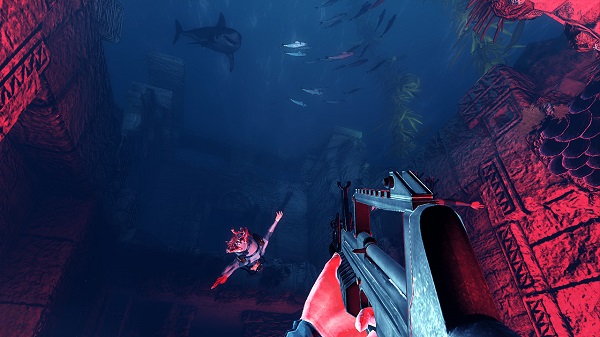 Depth is surprisingly smooth and pretty in motion, though if you get too close to anything you can see that there isn’t much in the way of detail. The map variety helps to distract from this; maps include lost temples, wrecked ships, and oil rigs, and each one feels refreshingly different. A recent update added an old mineshaft, and I hope to see more maps over time since they’re so enjoyable. The divers aren’t too exciting to look at right now as there are only three pre-set characters to choose from, so hopefully more are implemented in the future. A character creation option would be fun to play with, though largely unnecessary.

That same update that brought the new map also brought a new mode: Megalodon Hunt. I started playing this mode quite a bit lately and I think I might enjoy it more than the standard game type. Instead of two sharks, there is only one, but he’s giant and prehistoric. The other players all race to kill him in hopes of becoming him, and whoever scores 15,000 points first wins. Playing as the Mega is the quickest way to gain points, but as a diver you’re still rewarded points for finding gold to upgrade your weapons and for damaging the shark. It’s exciting on both sides; five divers hunting one shark with explosive harpoon guns can make you feel vulnerable as a shark, but as long as you keep killing the divers they’ll have shit weapons and be terrified. I see myself returning to this mode for a long while. 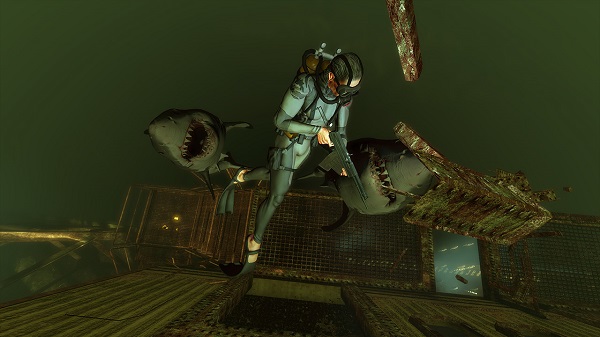 Perhaps Depth’s biggest flaw is that it feels a little unfinished. More players, more maps, more gametypes, more weapons, and a more cohesive UI will help thicken the murky ocean soup that this game needs to be successful. Digital Confectioners seem like they are going to keep updating this for awhile, so I hope that in time Depth will become the game it deserves to be. Though it didn’t scare me as much as CJ was hoping (all they need to do is add elder gods and alien lifeforms really), I found Depth to be a deep dive into a world I never knew I could enjoy this much.