Honorable Mention in Horror: Ecco the Dolphin - Rely on Horror 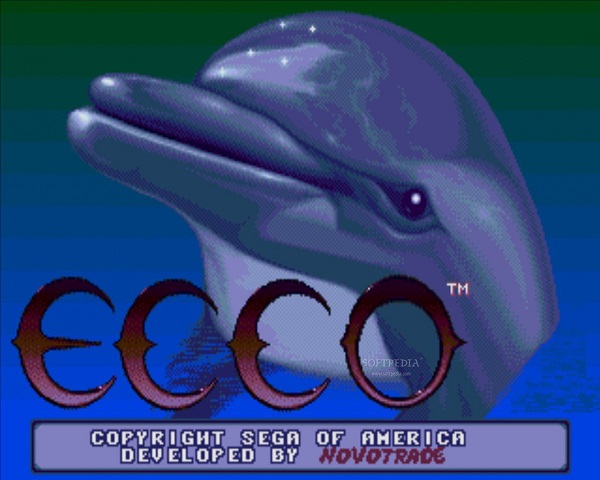 A young boy sits on the floor, bathed in the the cobalt hues of  the Cathode Ray Tube television. His parents have given him the okay to play with the Sega Genesis (he always asks for permission first), and now he’s choosing a game. Sonic the Hedgehog has been a constant in the last few months of his life, but he keeps dying in the Spring Yard Zone so he’s frustrated and wants to try something else. Sorting through the cartridges, both owned and borrowed, he happens upon one with a dolphin in mid-air, and decides this will be today’s adventure. 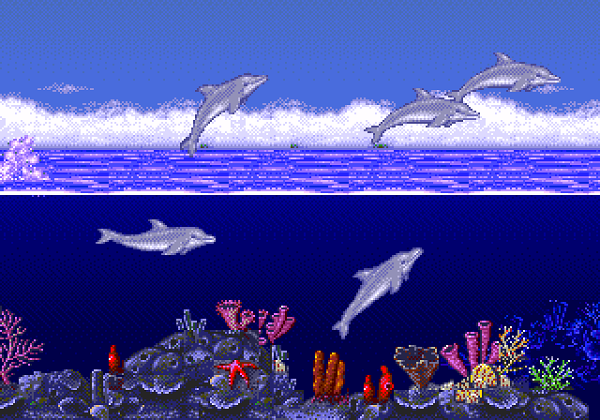 After the familiar Sega logo shimmers, the screen becomes a fast-paced tracking shot of an ocean, with dolphins propelling themselves out of the water only to come back down and puncture the surface upon re-entry. They swim like knives while making a grating sound somewhat comparable to the unraveling of shrink wrap, though the boy won’t make this connection until fifteen years later. Ominous, yet oddly optimistic music accompanies these harsh noises. A smug title screen with Ecco regarding the player arrives, smiling his best dolphin smile. And then:

The boy is now in control. Ecco is in a small cove with his pod. They are in good spirits, competing to see who can jump the highest. The boy uses Ecco’s sonar to communicate with the friendly creatures, and they goad him into testing his leaping mettle. The boy excitedly obliges, if only to see if he understands the controls. Gathering speed, he pilots the dolphin and launches him into the sky – but everything goes wrong all at once.

The screen flashes red, black,  and white. The marine life is pilfered from the ocean by an unseen force above, writhing in a horrible vortex while an ungodly cacophony of screams and deep vibrations traumatize the boy. The sounds and flashes stop, and Ecco alone is dropped into the ocean with an eerie apathy. Wide-eyed, the boy is transfixed, his paralysis interrupted only when he realizes Ecco will drown if he doesn’t swim up quickly. All of the subtle optimism bubbling beneath the previous song has been replaced by a haunting, synthetic bass note, punctuated by quick stabs of computerized bells.

This small child never gets much farther than this. The sound effects, the constant deprivation of air, the increasingly bizarre settings, and the incredible difficulty all serve to keep him sheathed in a cold sweat, as if he has just been submerged in the same depths as Ecco. He stays away from Ecco the Dolphin’s cartridge for months at a time, occasionally revisiting those icy, dark depths hoping to simultaneously overcome the challenge and his fear. The failures continue, and eventually he resorts to trying to use passwords to try and cheat. With no gaming atlas to guide him, he attempts combination after combination of letters in hopes of any boon he might acquire. ‘AAAAAAAA’ takes him to an early level that he can easily reach on his own. When he arrives at ‘NNNNNNNN’, he finds a new fear he could never have anticipated. ‘WELCOME TO THE MACHINE’ cascades down the screen, supplying the boy with a name of the fear he will harbor for years to come. All of the water is gone, replaced by assorted circuits, tubing, and…alien creatures. 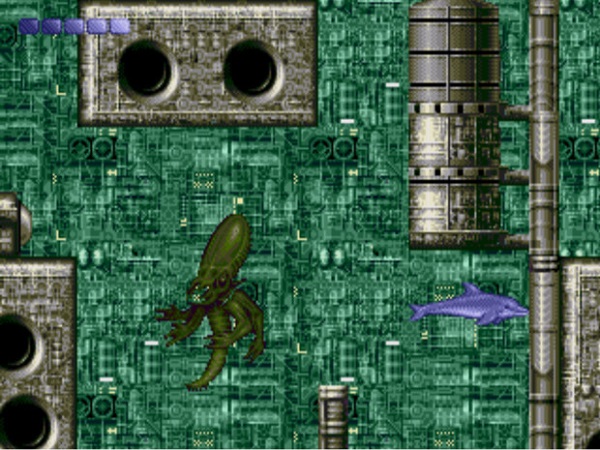 After the boy overcomes his shock, he realizes that Ecco no longer has a breath meter, his health is regenerating, and his sonar can make the aliens disintegrate (though their heads are autonomous and still fight him, regardless of their recent mutilation). The level requires no exploration, unlike the rest of the game, and asks the boy only to avoid obstacles while the level automatically scrolls. Though it takes him many tries, he overcomes the challenge, anticipating credits and a palpable relief. Instead he finds only darkness and this: 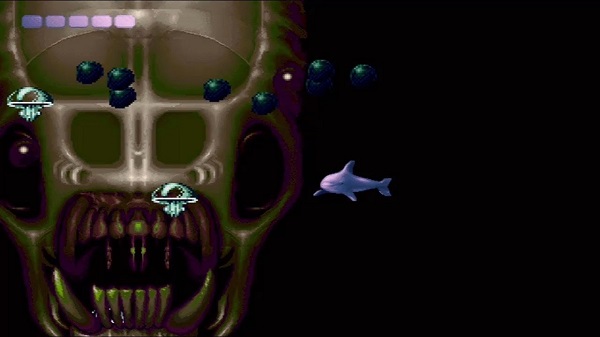 He turns it off and does not sleep well that night.

Years pass and the boy grows. Two sequels come along, and though he ignores the first, the third game is on the Sega Dreamcast. Two dimensions were already terrifying, and the thought of swimming in a full three-dimensional space brought that cold sweat right back to him. He watches his father play, and that is enough for him to remember fear of depths, darkness, and drowning. It isn’t until he is twenty years of age that he goes back and finishes all three games.

He won’t lie though. Those fears are still there. Deep inside him, he will always fear what lays deep beneath the waves.