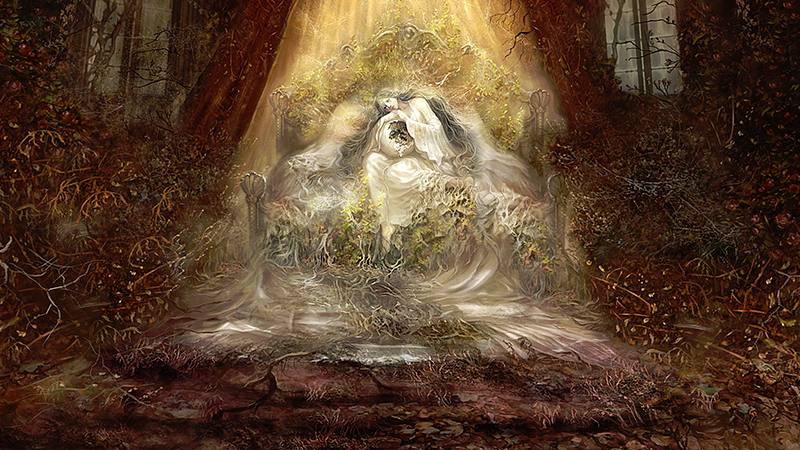 A little more than a year after it launched, The Ringed City is the second half of what was promised in the Dark Souls 3 Season Pass. While Ashes of Ariandel left much to be desired, this finale promises to cap off the trilogy with a wealth of story-based content. After so many games though, we may be feeling a bit hollow.

Slave Knight Gael, the guy who tricked us into playing the last DLC, has left to find the fabled Dark Soul and you’re right behind him. Venturing into two zones, the Dreg Heap and the titular Ringed City, you’ll be treated to environments not unlike what you saw at the end of DSIII, along with a ruined town that has seen better days. The level structure follows the same looping and overlapping paths you’ve been gifted in past entries. While still neat when you mentally bridge the terrain in your brain, it’s nothing mindblowing at this point. There’s also a number of hidden detours to take, some of which I didn’t discover until after I started writing this review. Despite the press images that have been coming out, there’s sadly no upside down or sideways environments to explore (i.e. COD: Black Ops III or Breath of the Wild), nor do they really surprise you with anything unseen in the franchise. It’s a shame because after exploring some of the unique beauty (and frightening darkness) to be found in all three games, climaxing the Dark Souls story with your hero wading through muddy swamps, soot, and broken castles you’ve seen 100 times is not that thrilling a climax. 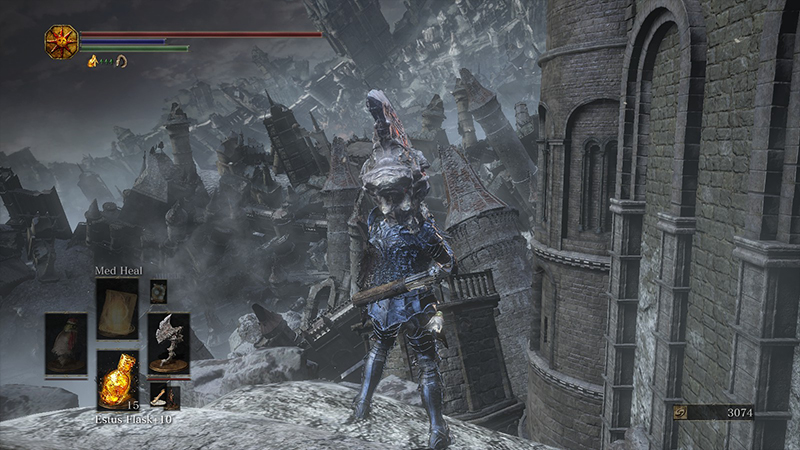 Bandai Namco’s PR left a warning that the game would require player characters to be around level 120 and I can believe it. If you were like me and were just oneshotting most basic grunts with a greataxe in the base game, you’ll either need to grind up those stats or opt for a situational, quicker weapon. Although it’s been months since I’ve touched DSIII, getting back into the swing of things took only a few minutes.

Much of the challenge anyway comes in the form of multiple instances where you’re outrunning obstacles pinning you down from afar until you reach the source. For folks who prefer more combat gauntlets or wide open spaces full of treasure, you’ll get a taste of both of those; but running and rolling is going to be the bulk of this add-on. While not as annoying as say, the archers in DSI’s Anor Londo, these new trials also feature more interesting approaches to besting them. And defeating the source of these environmental annoyances is even completely optional. In one of the first examples, I spent an hour trying to figure out the hard way to avoid something similar to Djura’s machinegun in Bloodborne. While I eventually bruteforced it, I later learned I could’ve easily saved myself some headache if I just paid attention to a clever visual cue from a faraway roof. 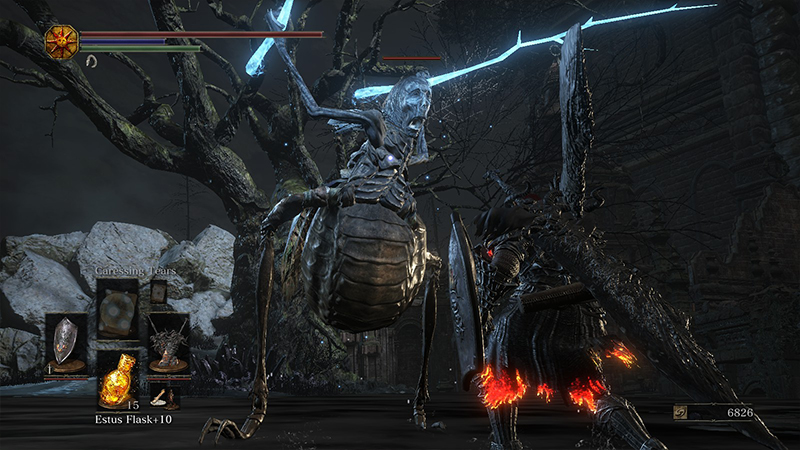 There are a bunch of new weapons, armor, and accessories to discover, some of which will even leave prior items obsolete). But at this point in the game, they don’t really offer much to players unless they’re jumping into New Game+. Luckily, you’ll also be given plenty of rare crafting materials to try out your new toys with. And while some of the elite enemies use the same “Player” moveset you’ve seen for hundreds of hours, some of the other new adversaries along the way have new attacks that will force you to learn some different strategies if you intend on surviving.

Unlike the two bosses on display in Ariandel, The Ringed City has a total of four (one being completely missable thanks to a hidden hallway), making on par with DSI’s DLC. You can tell this whole campaign intended to channel Artorias’s content as some of the bosses and locations feel very similar in moveset and setting respectively. One of the bosses even captured the bestial and dance-like elegance of challenging Knight Artorias himself, which was one of the most satisfying battles I’ve fought in the series. Unfortunately, two of the other bosses are a little more chaotic and you’ll find yourself fighting with the camera as much as dealing with the giant monsters breathing down on you. 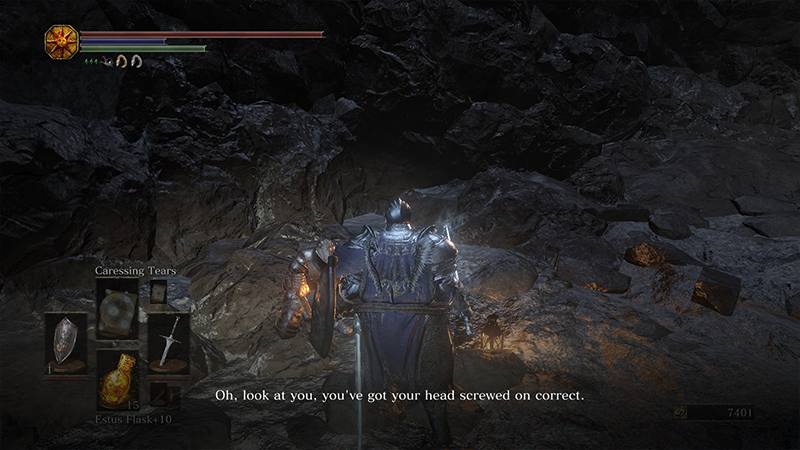 I looped around everything The Ringed City had to offer in about seven hours (four of which undoubtedly were on the bosses), and I still missed a few things. The wealth of content involved is definitely on par with the other mini-adventures the series has offered, but finishing off with this feels totally underwhelming. This is both due to the great final boss of DSIII that felt like a true sendoff as well as a lackluster ending for The Ringed City itself. If this type of content existed back in 2011 with DS1, that may have been a different story, but six years of killing and dying over and over has definitely left me fatigued on Dark Souls’ setting (for now). There’s not much more I could care about lore-wise that hasn’t already been discussed and theorized in 100 Youtube videos and I’m ready for the Souls team to move into something fresh and alive. 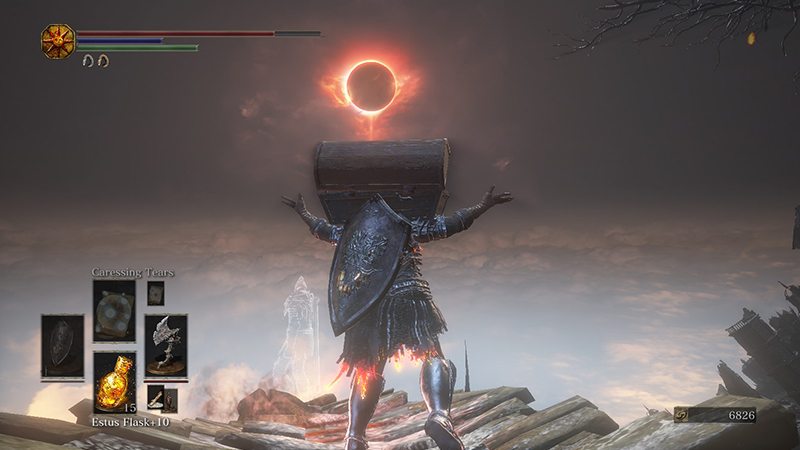 While offering some new toys and challenges and a day’s worth of fun/frustration, if you were already done (mentally) with Dark Souls III, it’s probably not worth reinstalling 25 gigs worth of game. However, for $15 and bragging rights, there’s far worse you could do with that time/money/data.

Note: A review copy was provided by Bandai Namco. The game was played on a 3.4 GhZ i7 Quad Core PC with a GTX 960 video card on Windows 10. I played through the entire experience in Offline Mode with no online invasions/summons.