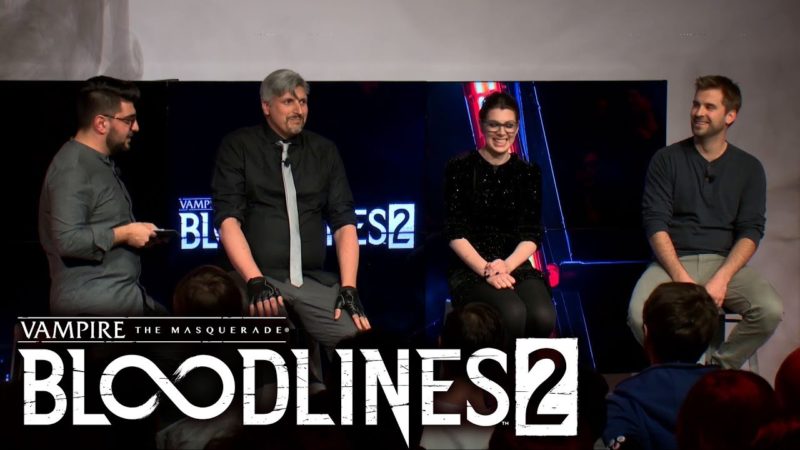 ‘Suddenly’ doesn’t even begin to cover it. Brian Mitsoda, who was the writer for the original 2004 VTM: Bloodlines, and creative director Ka’ai Cluney, have been fired from his position as narrative lead on VTM: Bloodlines 2, apparently without any warning. After years worth of work on the game, their sudden firing follows up the announcement that VTM: Bloodlines 2 was delayed into next year. We’d originally assumed it was due to a combination of Covid and wanting to polish up the game a bit more, but this news makes it sound as if the changes may be significantly more drastic. Along with Mitsoda and Cluney’s departure, a new creative consultant has been brought on board — Alexandre Mandryka, who worked on a bevy of Ubisoft titles in the past along with Warhammer 40k: Space Marine.

While Cluney has yet to make a public statement, Rock Paper Shotgun reached out to Mitsoda for comment, and he had quite a bit to say:

“Until recently, I was the Narrative Lead on a videogame called Vampire the Masquerade: Bloodlines 2 for Hardsuit Labs, Inc being published by Paradox Interactive (which owns 30% of Hardsuit Labs). After almost five years [of] involvement with the studio, I was suddenly terminated on 7/16/20.

That this came as a shock to me is underselling it. I’ve worked on Bloodlines 2 for almost five years. The story and main cast was initially conceived in my living room. I helped develop the pitch for Hardsuit Labs and helped pitch the project to Paradox in Las Vegas. I’ve been in charge of the narrative since the beginning, working long days and sometimes weekends to deliver a successor to Vampire the Masquerade: Bloodlines, and I’ve never been led to believe that I hadn’t succeeded. Very obviously, I have also been involved in the PR and marketing side of things, even though it was one of the most difficult parts for me. I’m a pretty private person – press and crowds tend to heavily trigger my social anxiety (which, if you’ve ever wondered about the gloves, they are “armor” that make me feel less exposed in situations that trigger my anxiety).

Bloodlines and the fandom of the game mean the world to me. So I lent my legacy with the franchise, my name, and my participation in marketing efforts for the game, even when it was intensely difficult and took a mental and physical toll. This is all because I wanted to do what was best for the game and the team.

The pride in the work, the fan expectations, and the support from co-workers who started out as fans kept me going through this long five years. And I’m incredibly disappointed and frustrated to say that this is where it ends for me on the project.

I was not part of the conversations that led to the decision to delay production, and to my knowledge, there were no delays caused by the Bloodlines 2 narrative development. I am confident and proud of the work that I and my team put forward. When that work will be seen and what form it will take is unknown to me.

It was a pleasure to work on this game and with many people at Hardsuit Labs and Paradox and I’m sorry I won’t be able to see it to the end. I spent years on some of the best characters and dialogue that I ever wrote. It’s meant a lot to hear from the Bloodlines community and I do hope that what’s finally delivered is as satisfying as I intended it to be. Thanks to all of you who supported me throughout the project.”

Yikes. While I would assume that it’s a bit too late in the game to simply rip out his and Cluney’s work and start over from scratch, writing around existing assets (ala Alien 3), who knows honestly. The hiring on of a new creative for sure indicates there will at least be re-writes and tweaking of what’s already there. Firing both of them without warning (and possibly explanation considering Mitsoda’s bewilderment) is pretty shitty to say the least, and fans are… unhappy to put it lightly.

The official VTM: Bloodlines 2 discord server has been lit up like a Twitch chat all morning. Fans have been going back and forth weighing the possibilities of what this announcement could mean, and it’d be difficult to call any of it a “positive outlook”. The hiring of an ex-Ubisoft employee has some panicking that microtransactions will be added into the game, while others still have been floating rumors that Malkavians have been cut (either for being to complicated to develop or to ‘satisfy SJWs’ due to mental health depiction concerns). I can’t find any official source on that though, so don’t worry about them being gone at least. The general gist though is that the foundation of hype and trust in the quality of the final product has been rocked considerably, and you can see backlash in pretty much every possible comment section for the announcement.

I gotta admit, even my hype (which is well documented) has been shaken. I can only hope for the best, but this decision is both really gross, considering the zero warning to the two people that had been the face of VTM: Bloodlines 2, and boneheaded considering how much fans adored Mitsoda’s work on the original. We still don’t have a release date beyond 2021, so it will be quite a while before we find out if this decision sinks or swims.