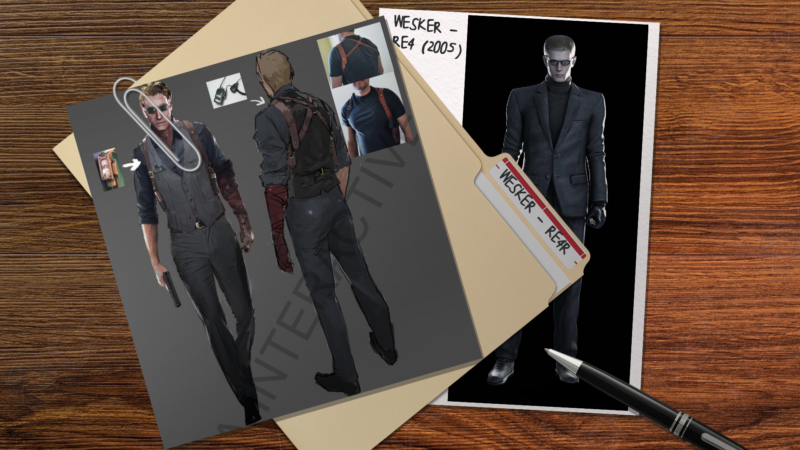 For over a year now, the cat has been more or less out of the bag on Resident Evil 4 Remake, which seemed like an inevitability after how insanely well Resident Evil 2 Remake sold. While still not officially confirmed (and many have suspected that last month’s Resident Evil 4 VR was what this leak was actually referencing), it keeps popping up in the rumor mill — and today it seems the flood gates have opened.

DC Douglas, who has voiced the character in every appearance since 2007’s The Umbrella Chronicles, allegedly shared production artwork from the upcoming project with fans, who have gone on to share the artwork online. The artwork appears to be concept art showcasing Albert Wesker’s planned design in-game. While the design is substantially different than Wesker’s original look from the 2005 game, that’s par for the course as almost none of the characters in either of the existing modern remakes wear their original costumes (by default, at least). Fans have made special note of Wesker’s bandaged arm, which is significant as it’s the same arm Wesker burns in Code: Veronica, although this game is set 6 years after those events, which seems like a long time for a character with a nigh-invulnerable healing factor to still be coping with.

So not only did dc douglas break NDA on live stream by admitting to being wesker in the Separate Ways portion of the new #re4remake , but he also sent out concept art given to him by @CapcomUSA_ @dev1_official #REBHFun #wesker #ResidentEvil pic.twitter.com/BlE6orf3tK

This leak follows up on a supposed misstep for the actor during a live stream, where he allegedly remarked on the Separate Ways campaign (and thus Wesker) returning for Resident Evil 4 Remake. While the footage has since been edited to remove his remarks (and thus cannot be confirmed in any official capacity), the stream still exists with a short message at the start explaining the edits (although it’s specifically been done due to other comments DC reportedly made during the stream that made fans uncomfortable).

Update: Multiple separate but trusted anonymous sources have reached out to us saying that Douglas shared the image with them, corroborating the original tweet.

Update: Capcom has responded to our inquiry:

“Capcom has not made any statements regarding future projects […] Capcom cannot offer comment on rumors or speculation.”

No big surprise, but we appreciate their speedy response!