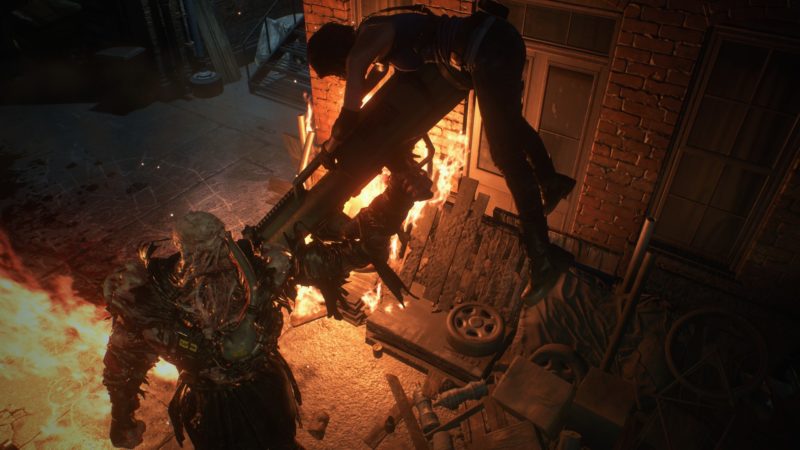 UPDATE: GamesRadar has clarified that the journalist who played RE3 Remake for the purposes of the article was mistaken, and the area Nemesis entered was not in fact a safe room. Safe rooms have been, and will (probably) always be safe. Whoops.

Well my S.T.A.R.S. — that’s a whole lotta Resident Evil 3 Remake news. Official Xbox Magazine’s newest issue, 188, has revealed a treasure trove of new information regarding RE3 Remake, and some of the details are quite shocking. We’ll try to keep things simple, but thanks to (yet again) Resident Evil franchise leaker AestheticGamer, we have a great breakdown of the article’s key information. Starting with the biggest reveal, we’ll go from there. Note: Some of this information could be seen as spoilers, so read at your own risk. I should also mention that I reached out to Capcom’s Community manager about some of the vaguer details from this article, who responded “We’re working on clarifying some of the contents of recent coverage and will have more info soon”:

UPDATE: For clarity: none of this should be taken as 100% confirmed — some of the article may be speculation or extrapolated by AestheticGamer in his breakdown, and as the game is still unreleased, some elements are subject to change as well.

-The devs kinda’ used Mr. X as a way to gather some feedback on Nemesis, though their goal all along was to make Nemesis a more terrifying and tense foe than Mr. X in nearly every way.

-There are some unexpected environmental pauses to be had in RE3… Like the classic red explosive barrel. Do you use it immediately on some zombies right now, or save it for later to be able to use it as a mighty blow against Nemesis?

-Nemesis the first time you drop him after a major story moment can drop rare items for you to pick up from wherever you down him at.

-The dodge mechanic has some context-sensitive actions Jill can do if you pull off a perfect dodge against specific types of attacks. One example is Jill does a unique animation if you perfect dodge one of Nemesis’ tentacles.

-There are certain areas the game is kinder and will give excuse why Nemmy can’t follow and give you a breather, but one of the main goals of the remake was to make him a rather consistent threat. Not always chasing you but the possibility he could chase you there stays true.

-They’ve designed Nemesis AI with actually not being relentless, if he’s always chasing you that’d get tiring fast. His AI works to dynamically sorta’ direction his moves, and give the player breathing room as well.

-Capcom have worked a lot on AI for this title in general, talking about making monsters react more to the environment and situations, and how they can work together, separately, etc. They even talk about how they’ve made the zombies behave differently whether they’re alone or if there’s several zombies around and they’re in a group.

-Grave Digger is confirmed to be in the game. Hints there’s some Tremors-inspired sequences with it, and you can shoot and toss grenades down its throat.

-Spiders are confirmed to be in the game! They have a tendency to scuttle all over the place, sometimes towards or away from you, or drop on you from the ceiling. (Also confirm Drain Deimos and Spiders are separate enemies in RE3 and behave differently.)

NOTE: AestheticGamer made a point to mention that the previous confirmation of Spiders may be closer to speculation, despite how strongly it’s worded in the article. We’ll clairify when there’s more information.

-Say Raccoon City is a LOT bigger than it’s been previously. They designed a lot of the city, it’s not open world but they designed it so you can explore quite a few streets and even stores and buildings of the town, and have multiple paths through the city to take.

-Jill can unlock more pathways in the Subway System to new parts of the city as a form of fast travel. As you get further in the city, the Subway becomes kinda’ your hub to connect all the different parts of town.

-There’s a lot more side stuff you can do than RE2 or the original game, often times there’s optional back-tracking the game gives you… You have a code to unlock a weapon tack in another part of town now, but do you want to trek through the city and risk facing enemies you left, or worse, Nemesis showing up while you do so? There’s a lot of optional distractions, route planning and risk and reward going on here.

-Carlos is playable and has more playable sequences, but he doesn’t have his own campaign. He also may show up as you go through the city as he’s around looking for survivors as well. They put a lot of focus on making Carlos rough around the edges, but reliable and likable.

-Small thing, but they confirm in the sewers if you walk through grime or under a running pipe, the grime does stick to you for a bit before dissipating. Look how far video games have come!

-Sound design has been a big focus, fully supports surround sound systems and did a lot to make everything “sound” right with a city going into chaos.

-There’s a slight hint that there may be a couple new monsters in RE3 that weren’t in the original, but you’ll have to wait to see.

-The team focused on having one consistent story rather than different ways events can go down. That said, they did a lot to make the story have more depth and stand-out. They say the story fleshes out Jill, Nemesis, and the UBCS a lot more than the original did. This is a classic story of Jill vs Nemesis, and both of them have history and reason to be struggling against one another that’ll be more fully explored. Hint we’ll dive a lot more into Jill’s character, and Nemesis as a monster. They hope people will be really satisfied with what they’ve done and added to the story.

-Being asked of returning locations or stuff from RE2, it’s answered that you may notice “a few things” when you go through the game. Hint also as this game takes place a day before and a day after RE2, you may also see some before and after things.

-The team hopes Resident Evil fans will be impressed with their reimagined Raccoon City. It’s an iconic location for the series and they really wanted to get it right, and crammed a ton of attention to detail into the city they hope fans will appreciate.

-OXM say what they’ve played so far is “extraordinary”, and if the rest of the game can keep up the quality of the 2-3 hours they played, it’s going to become a classic Resident Evil game.

Skipping down a bit, I’m terribly interested to know how exactly Capcom plans to flesh out and dive deeper into the character of Jill Valentine in RE3 Remake. I’ve often teased fans of her characters with the Red Letter Media character evaluation from their famous Phantom Menace review, in which I ask for a description of Jill without listing her appearance or job. It’s a pretty difficult question, as she’s routinely been played very straight and kept as dry as possible across most of her appearances. Fleshing her out and focusing on giving her a unique and distinct personality would be a major benefit to the character, in my opinion. I am wondering how exactly they’ll go about it, though. Jill has pretty much zero identity prior to the events of RE1; she was a Delta Force military bomb disposal expert, who took those lessons and became a master lockpicker. Expanding on pretty much anything would be a huge change of pace for her.

The other major ‘character’ at play here is, of course, the city itself. Raccoon City is very easily the star of the Resident Evil franchise, having appeared in nine titles to date and referenced or alluded to in nearly every game in the series. There’s very little that could be expanded upon theoretically, but as RE3 Remake exists in a newer, more free state than any titles before it (not bound by the same structure or design as previous iterations) the possibilities are limitless. Knowing that the subway will act as a hub that allows us to spread out across the map, which is apparently much larger, helps give weight to a more unified experience overall. I’m especially eager to explore a more Metroidvania inspired version of the city, where keys, codes, and other items will make older areas open up more. The original RE3 has very little that could be described as ‘side content’, off the top of my head I can only think of about two instances where you’re rewarded at all for backtracking unnecessarily.

It’s also pretty cool to hear that Carlos will be more “alive” in the city, that we may actually just run into him on occasion. The original RE3 kind of already has elements of this, you can spot him a few times without actually interacting with him (or even a cutscene playing), so something similar to that sounds great. We already more or less knew (or at least could extrapolate) that we’d be playing as him multiple times. Trailers already showcased him visiting two locations, the R.P.D. and Raccoon City General Hospital, which might be the only sections but still double what he had originally. Making Raccoon City feel more alive (you know, as it dies) in RE3 Remake is absolutely an integral part of telling this story, and Carlos is a great way of illustrating that.

In terms of creatures, it seems that this article has finally laid to rest the question of creature variety in RE3 Remake. Everything besides crows, dogs, and sliding worms have been confirmed now, and hinting at the possibility of even more? To clarify, Peter Fabiano specifically says “I think you’ll see some new designs and some new creatures“. This is a pretty big step up from REmake 2, which cut several creatures and radically changed two of them (G Adult and Ivies). We can only wait with bated breath to see what these new creatures look like, and what some old favorites have been reimagined as (we’ve already seen the horrifying new Frogger).

That’s all for now, but that was quite a lot of “all” at least. There’s also some talk about Resistance as well, but no new details from what I could tell. In the meantime, we still have that demo to look forward to and RE3 Remake releases April 3rd, which is only 28 days away!