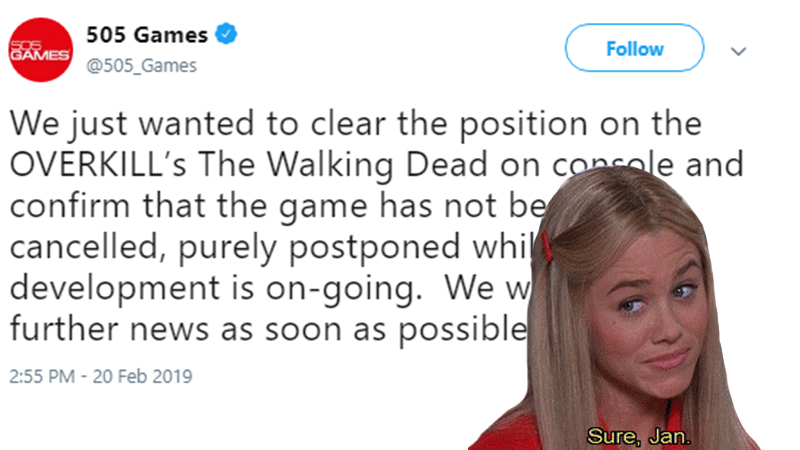 Don’t say we didn’t warn ya about Overkill’s The Walking Dead. Thanks to often poor or simply uncooperative matchmaking and jarring difficulty spikes we weren’t able to give it a proper review back when it originally released in November, but suffice it to say we didn’t think highly of it. I had postulated at the time that what we’d gotten was essentially an official release of an unfinished product, “beta testing” on a hapless Steam audience as console versions were still due out a few months later. Well, that didn’t work out so great as those were postponed in late January, and then Sony began issuing refunds for preorders a few days ago. 505 Games, co-publisher (along with Starbreeze Studios) assured people that Overkill’s The Walking Dead was not canceled, but simply “postponed whilst development is on-going”, and that we’d get an update as soon as possible. That was six (6) days ago, and the official word from Skybound (rights holders of TWD brand) is:

As of today, we have terminated our contract with Starbreeze Studios and will discontinue all efforts on OVERKILL’S THE WALKING DEAD. Our creators and their stories are the core of Skybound, and since 2014 we have worked hard to expand the world of The Walking Dead into an exceptional Co-op Action FPS. We did our best to work with Starbreeze and resolve many issues that we saw with the game, but ultimately OVERKILL’S THE WALKING DEAD did not meet our standards nor is it the quality that we were promised. We are exceedingly sorry to our fans and share their disappointment in the game. We remain dedicated to providing our fans with the most premium quality content we can offer, and will continue to look for alternative video game options for the IP.

The oof heard ’round the discount bin, as it were.

While TWD is still a very popular IP (despite declining viewership and ratings of the TV series), it still has yet to really get a good footing with video games. Aside from a handful of mobile things, the only other major attempts have been Telltale’s TWD series (which went strong until Telltale Studio’s sudden closure last year) and 2013’s awful Survival Instinct, developed by Terminal Reality (a studio that closed immediately after that game’s release). With Starbreeze Studios (and Overkill Software) looking down the barrel of their own closure, a morbid picture of The Walking Dead has become something of a studio killer. This revolving door of dead studios left in the wake of (what I personally think to be an utterly pedestrian IP) fills me with weary resignation as this industry seems to be falling apart around us at the cost of hundreds of jobs. Something’s going to give, folks — sooner, rather than later. Probably because it was already on my mind thanks to rewatching one of my favorite Crowbcat videos, but this news is going to keep “Human” playing in my head for the rest of my evening.