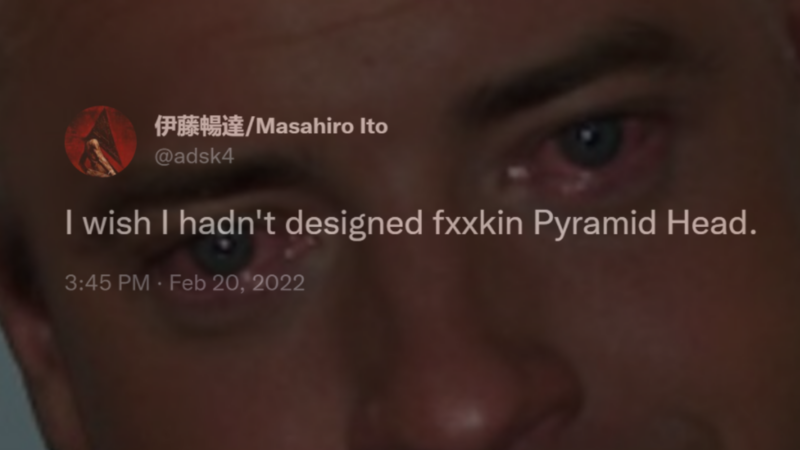 If there was any doubt left in your mind as to whether or not Konami had actually managed to re-acquire the Silent Hill web domain, this should probably put a nail in that coffin. After months of the website hosting a rather simple meme, it has now changed to hosting a single image of a now rather infamous tweet by Silent Hill creature designer and ex-Team Silent developer Masahiro Ito. The tweet in question was part of a series of tweets in which Ito bemoaned having created the creature Pyramid Head in the first place, although he neglected to state the reason (and specified it had nothing to do with unpaid royalties).

Back in 2019 the Silent Hill website, silenthill.com, went up for sale from the web domain holder for a cool $9,835 USD. It was snapped up quickly after but left dormant for over a year until the announcement of 2021’s Resident Evil Village. After this point, it became host to a single image of the 2006 Silent Hill film’s Pyramid Head against a height chart, mocking the 9ft tall stature of Village‘s popular Alcina Dimitrescu. It stayed that way for a year as of a few weeks ago, and now it has suddenly changed to this screenshot of Ito’s tweet.

It’s been in question for a while now if the Dimitrescu meme could just be part of an (admittedly shallow and a bit lazy) way of trying to catch attention in the midst of the fervor surrounding the character’s internet popularity. I found it hard to say, personally, especially as Konami has a history of being bizarre with its marketing, and Silent Hill as a brand seemed to be waking up to a degree. This however feels quite out of the question for being an official use of the domain, as it’s essentially (if indirectly) shitting on the property and Konami as a whole. So yeah, a fan had nearly 10k burning a hole in their pocket and decided to usurp the big K while they could.

The entire situation is deeply embarrassing for Konami, but also feels par for the course with the company’s trajectory as of late. Oh well, maybe we’ll get a new Stephanie Sterling segment out of it.