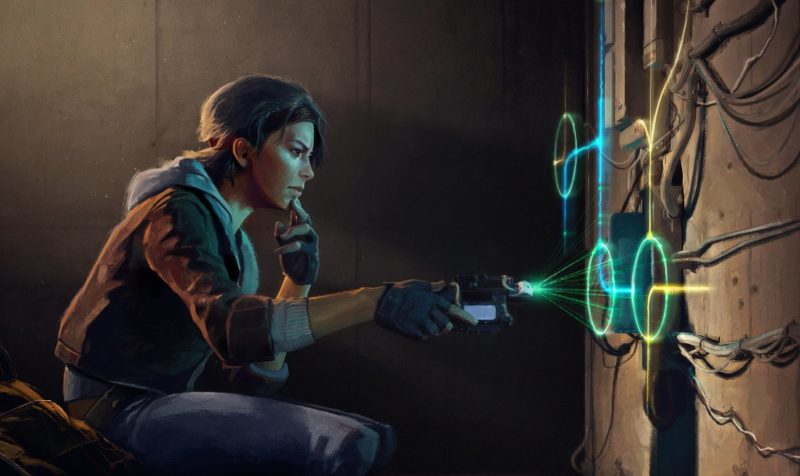 Despite Half-Life: Alyx releasing in just about two months, Valve has been… weirdly quiet about it. Presumably just coasting on the fact that it’s a new Half-life game and that’s really all the marketing that needs to be done for it, but it’s still weird to see a major studio act so completely lax about letting people know practically anything about the new game. All we’ve seen from it thus far is the original reveal trailer, some blurry off-screen gameplay from YouTube, and a handful of leaked screenshots. A bit dry, as it were. Well, I guess to make up for that, a team of Valve developers working on Alyx took to Reddit to host an AMA to at least let us know something. Thankfully, we learned quite a bit, but I’ll try to break it down to the things that us horror folk will care about the most.

Yes, Barnacles are a threat in VR. They don’t kill you instantly. You’ll deal with them in familiar ways, but the opportunities afforded by VR also give you new methods to use against them. We experimented with moving the player, but moving the player without their input in VR didn’t work very well. As with many aspects of working on this game, we’ve had to find new ways to take well-worn mechanics and other Half-Life staples into the specific framework of VR.

Similarly, Combine soldiers definitely return, both in the form you’ve previously seen them as well as with new variations to keep players busy and take advantage of VR.

Some creatures respond to audio more than others. We don’t want to spoil anything, but there’s an example of this we’re particularly excited about.

As with audio, limb dismemberment is not a factor in most combat encounters—but there is a very notable exception.

Because the game includes the ability to mantle in continuous motion, you don’t need often need to jump. For instance, if you need to get past an obstacle like a crate, you mantle up rather than jump up. The only time you need to jump is to traverse a short gap, which happens very rarely. We tried a few iterations of jumping, but ultimately found that even in continuous motion, players preferred dealing with those jumps with a teleport-style movement.

Curious what the mean with “a very notable exception” in terms of limb dismemberment. My first thought would be Zombies, which were the only creatures you really could dismember in Half-Life 2 (albeit just bisecting them) although you could sort of blow apart Antlions to a degree. This is either in reference to Zombies or an entirely new enemy type that’s most likely built around it. I’m also curious how you could possibly re-work Barnacles without them moving the player (if you’re unfamiliar, them grabbing and dragging the player up is literally the one thing they do).

Among the testers, did any of them ever have to remove the headset, out of fear or disgust for the zombies/horror atmosphere?

Like most of us here, I only tried VR in public areas and non-violent games so I really don’t know what to expect regarding that matter.

Ravenholm was so scary when I was younger (sorry PEGI), and going through this was a real achievement for me back then.

Anyway, I really hope i can get my Index in time for the release. And thanks for bringing back Half-Life.

Tristan here, I admit I cannot deal with headcrabs in general, and definitely not in VR. If I’m testing the game, and I’m in an area where I know one of those things is around, I’ll remove the head set and hold it off my face as I attempt navigate on the 2d monitor screen, to lessen the impact of headcrab discovery. Disappointingly for me, it seems that I’m the only one on the team who can’t deal, we handle the scarier parts pretty well in terms of making the game accessible.

Horror is part of the franchise, and through playtesting, we feel like we’ve gained some confidence about where to draw this line. Some of our gorier visuals tend to evoke a grim fascination rather than revulsion or panic, and apart from myself, we’ve hardly ever seen anyone nope out of a playtest, even during the creepier sections. So among testers I still seem to be the outlier on horror tolerance.

Glad to hear that horror is still very much a part of Alyx. It looked like it from the trailer, but it’s good to hear anyway. If you haven’t seen the zombie corpse (sans Headcrab) from the leaked screenshots, it’s pretty god-damn gruesome so I’m eagerly looking forward to fighting these things. Ravenholm is fondly recalled as one of the major highlights of Half-Life 2, and many fans are hoping that we may get a chance to see the outbreak occur first hand in Alyx.

Jamaal here… It’s been great to work on these classic characters and seeing them in VR has really excited everyone on the team. The HL:A trailer gave you a taste of what is coming, but we are avoiding spoiling too much at this point.

When it comes to the work the community does around the HL Series, we are humbled by the affinity and creativity that people have for the story and characters. We hope everyone will be as excited with Alyx’s journey in HL:A. Returning to HL has been extremely motivating. We have a lot of affection for the universe and characters, and personally I am proud to be helping build on something so iconic. The team has many of the original HL developers and a lot of new creative people who have made some integral additions to HL:A and the overall HALF-LIFE storyline.

I don’t know what we will do next with HL, but I’m looking forward to what you all think of HL:A.

Hey SmanDaMan Jamaal here.. we always enjoy speaking with the community. Our games like Dota 2 and Counter-Strike have a long history of ongoing communication with their players. For HL:A, our first single-player campaign in several years, we wanted to be able to speak to the community in a different way than we do with our service games. That prompted much of the recent work we’ve done on social media and other venues like the new HL:A site. It was a great opportunity to widen our outreach as Valve more broadly.

The team is working diligently and we are on track to deliver HL:A on our announced released date. It’s an exciting time.

We don’t want to spoil too much of the game, but my personal favorite mechanic is being able to grab and manipulate so many different things with my hands

You seem confident in releasing the game on time. How much, would you say, of the game is done? I’m worried about Valve Time kicking in.

With the exception of some tweaks to the absolute final scene, the game is done. Lots of us at Valve, as well as playtesters, have played through the entire game multiple times.

Right now we’re primarily polishing and fixing bugs, which is where we’d hope to be at this point in the development cycle. We’re confident we’ll hit our intended release. (We let the Valve Time happen before we announced the game.)

Those are the main points I could find that I thought were the most standout, but there’s lots more in the actual thread (there’s a bunch of technical stuff too if you’re into that).