Dead by Daylight: New DLC is a Killer K-Pop Star - Rely on Horror

Dead by Daylight: New DLC is a Killer K-Pop Star 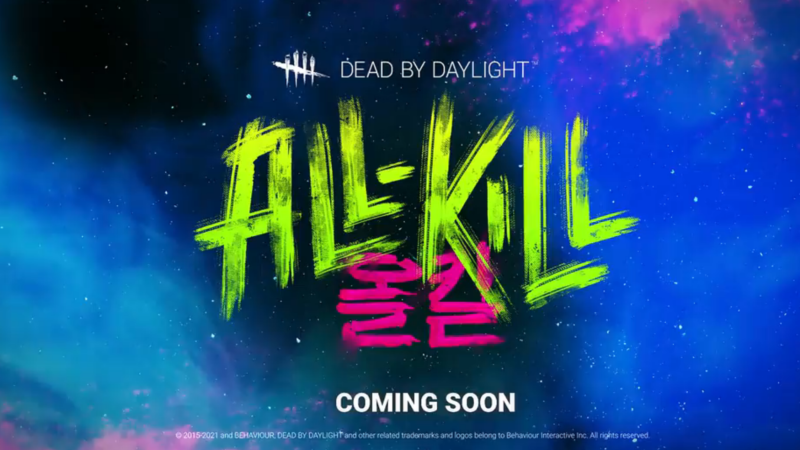 K-pop stans, unite! Dead by Daylight has finally announced its latest DLC, All-Kill (which seems to be dropping the Chapter header from its title, at least in marketing), its first since December’s Chapter XVIII: A Binding of Kin. All-Kill introduces a new killer and survivor into the fog, this time from the lavish and sexy world of K-pop. The teaser isn’t up on YouTube yet, but you can check it out over on IGN. The new killer is Ji-Woon, The Trickster, a depraved idol who delights in the death of his fans (and perhaps the prettiest character model to grace Dead by Daylight yet).

A vain and talented singer, Ji-Woon thrived under the attention of others. His talent caught the attention of Yun-Jin Lee, a producer with Mightee One Entertainment. She recruited him into the boy band, NO SPIN, kickstarting a lifestyle of fame and celebrity. Yet, over time, the thrill faded. He begrudged his bandmates for dividing the adoration deserved for himself. When a fire broke out in their studio, he left them to die, their pleas for salvation exciting him. Emerging from the inferno, he played the part of bereaved survivor, though he secretly harbored a newfound addiction in controlling the lives—and deaths—of others. He began abducting victims to torture and kill. Murder scenes became elaborate art pieces, and the screams of the dead were recorded and secretly woven into his tracks.

As murder became his artistic outlet, his music faltered. Mightee One’s executives reacted by restricting his creative control. He considered this a grave insult. His revenge came three months later at a private show planned for the executive board. Nitrous oxide seeped into the hall, incapacitating each member. Ji-Woon bound and tortured them on-stage in an elaborate performance. Only Yun-Jin was given a stay of execution—his favorite allowed to be the sole audience member, eyes pried open. As the show ended, he bowed, and made his way to Yun-Jin, intent on tying up loose ends. But before he could strike—The Fog. Billowing in, it revealed a realm adorned with rusted hooks, sustained by a million eyes that would watch him, run from him, experience him. All he had to do was accept, become an implement of The Fog and, most importantly, make them scream.

The Trickster’s new abilities are as such (from Polygon):

Start each trial with 60 Blades. Press and hold the Power button to wind up and enter the throw state. While in the throw state, tap the Attack Button to throw a single Blade, or hold down the Attack button to unleash a flurry of Blades. Throwing a flurry increases control and throw rate while decreasing movement and speed. Blades can be restocked at lockers.

Every time the Trickster hits a Survivor, he fills his Event Meter. Once the Event Meter is full, the Trickster activates Main Event, which gives him an unlimited amount of blades to throw. His throw rate is significantly increased, and he does not slow down while he’s mid-throw, which makes him a much more potent ranged Killer.

This killer also brings in three unique perks, which can eventually be taught to other killers as well:

When carrying a Survivor, all other Survivors within your Terror Radius suffer from the Exposed status effect for a brief duration.

After a Survivor performs a rushed vault through a window, the Entity blocks that window for a short period of time. The Hex effects persist as long as the related Hex Totem is standing.

Whenever you hook a new Survivor, you gain a token. Once the final generator has been repaired, the Entity blocks both Exit Gate switches for a time based on the number of tokens in your possession.

Along with the Trickster, we have a new survivor, Ji-Woon’s producer: Yun-Jin, who’s been dragged into the fog along with her star act. Yun-Jin brings new perks with her as well, of course, with her perks focusing on her dynamic with the rest of her team. They’re surprisingly callus, playing into abilities that save her — not her team. This is sort of a shake-up from the norm (especially following one of Dead by Daylight‘s previous survivors). Maybe she deserves to be here.

Each time another Survivor is hooked, you gain tokens that when consumed grant a progression bonus after successfully performing a great Skill Check on generators.

After stunning the Killer with a pallet, break into a sprint to escape the area. Sprinting causes the Exhausted status effect, and the perk cannot be used again while Exhausted.

Whenever a nearby Survivor gets hit by a basic or special attack Self-Preservation activates, hiding the Scratch Marks you leave behind for a short time.

Dead by Daylight: All-Kill doesn’t have a full release date yet but is available now for a limited time on PC for those that opt into PTB testing. It will of course release across all versions eventually, including Dead by Daylight: Mobile.