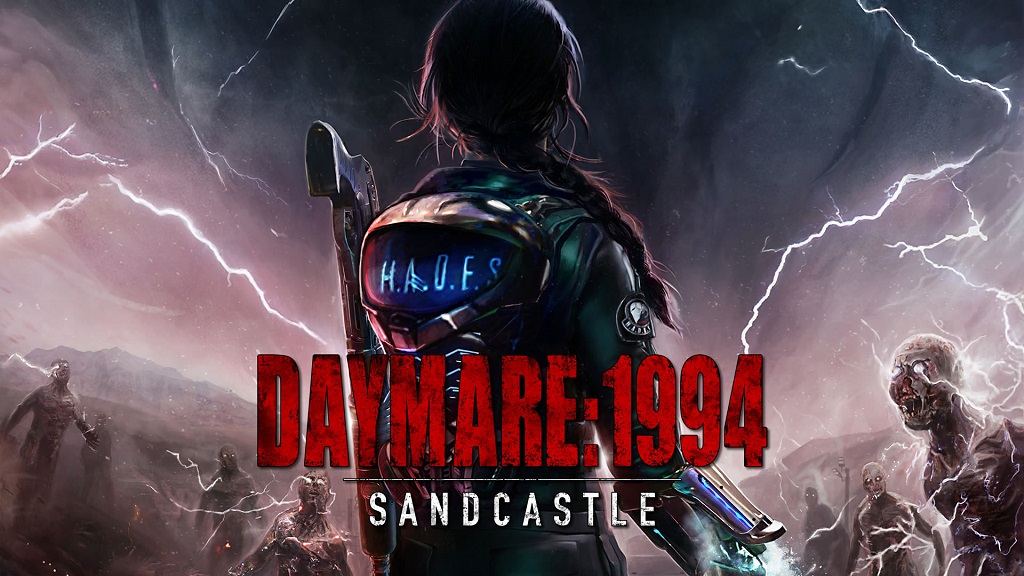 When Daymare: 1994 Sandcastle was first announced earlier last year, as the follow-up to Invader Studios‘ debut game, Daymare: 1998, it was exciting news that the team would be continuing a series that showed some promise with its first outing, and we were excited to hear any further communication. After almost one year of relative silence about Sandcastle, we’ve finally received some updates. We even got to experience some hands-on time with the game’s current build ahead of its upcoming limited public demo release. Here’s a look at what you can expect when the demo drops this week. 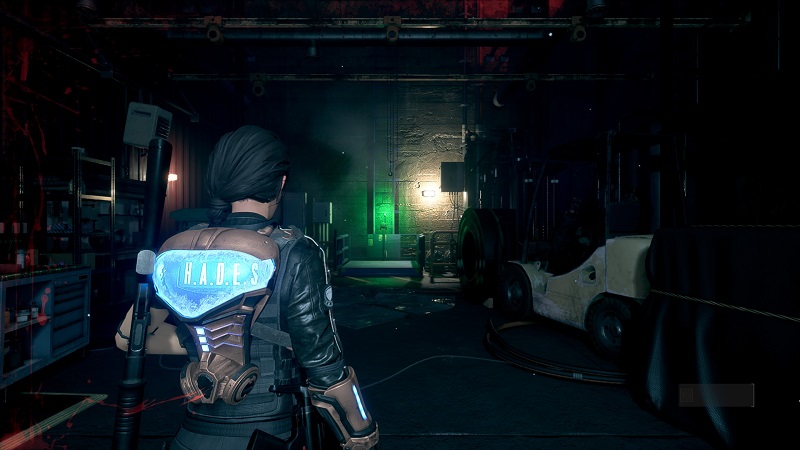 The opening throws you right into the middle of a chaotic scene, where you’ve just escaped from a horde of enemies who are still banging on the door behind you as you try to catch your breath. Players meet the game’s new main character, Dalila Reyes, among the chaos and confusion of this imminent threat.

Right off the bat, the visuals are a noticeable improvement from Daymare: 1998, with everything looking sharper and more detailed, with more high quality, polished, and unique assets than 1998 had to offer. This makes sense, given that Invader is a more accomplished developer than they were when working on 1998. The upgrade in visual fidelity is a great addition that immediately elevates 1994 above its predecessor.

The performance also feels much more stable than Daymare: 1998 ever was. Whether on PC or consoles, 1998 suffered from various performance problems across the board. In our preview play, 1994 ran much better. You can get some very solid framerates even on a basic, moderately powerful gaming PC. The newer game boasts a built-in benchmark tool that tries to optimize for your hardware, plus about a dozen other individual settings for tweaking your visual/performance experience.

After the short cutscene, players take control. The next jump forward in player experience becomes evident the moment you do; controls are now much tighter, more smooth, and more fluid than in 1998. Gone are the cumbersome, overly-complex controls for combat and item management from 1998. In their place, you’ll find a much simpler, streamlined system that makes the game feel in a league of its own and a few steps ahead of the previous outing. 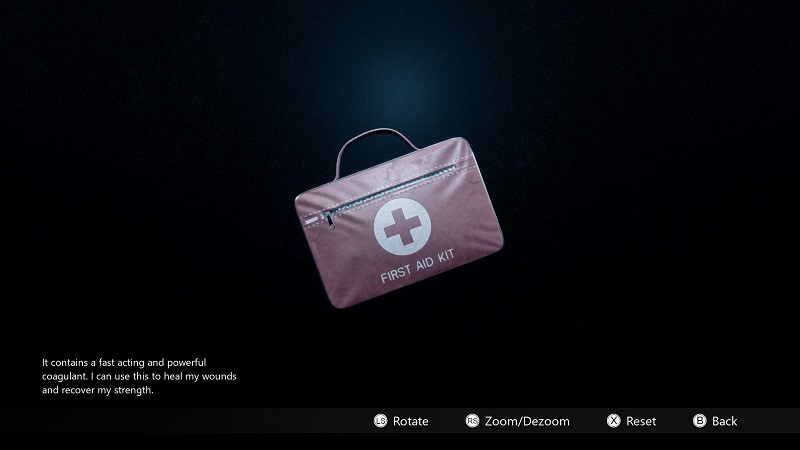 Players set out exploring through a few rooms with some story exposition over Dalia’s radio. After that chance to get comfortable with basic controls and movement, you’ll encounter your first enemies in Sandcastle, a new form of zombies called Decoys. These are fast and furious genetic experiments, far from the primarily slow-moving zombies of 1998. Since you’ll be facing more fierce enemies this time around, the game also steps up its game for the combat system as well, with several new improvements and features. 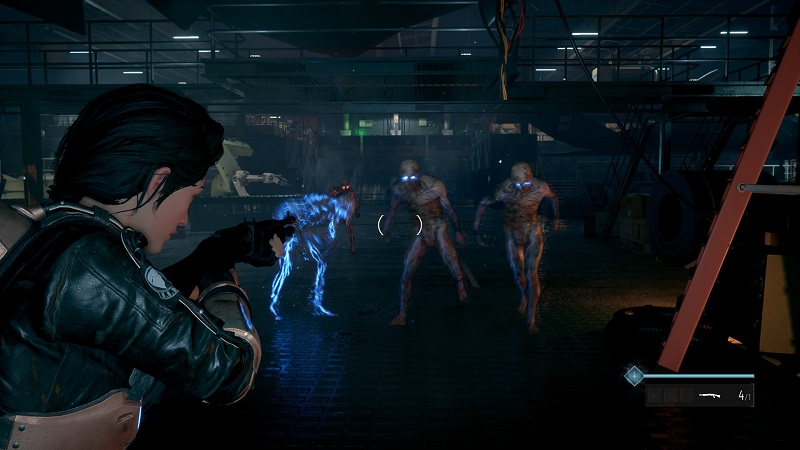 Decoys move much faster and often attack in coordinated groups to hit you from all sides. Thankfully you’ve got some new tricks up your sleeve to keep the crowds at bay and a few new mechanics that make these enemies a whole different experience than fighting zombies. First of all, the game features a “charge” system, where the enemies can either be colored red or blue, with slightly different abilities tied to the colors.

Blue enemies succumb to standard weapons and die as expected. However, combat becomes an entirely different scenario if any red enemies are nearby. Red enemies require using the new Frost Grip accessory that’s attached to your wrist. The grip has several functions throughout the game; during combat, it can either shoot a short-range spray of ice to freeze your enemies or shoot a frost-charged bullet from your gun for a longer-range effect. 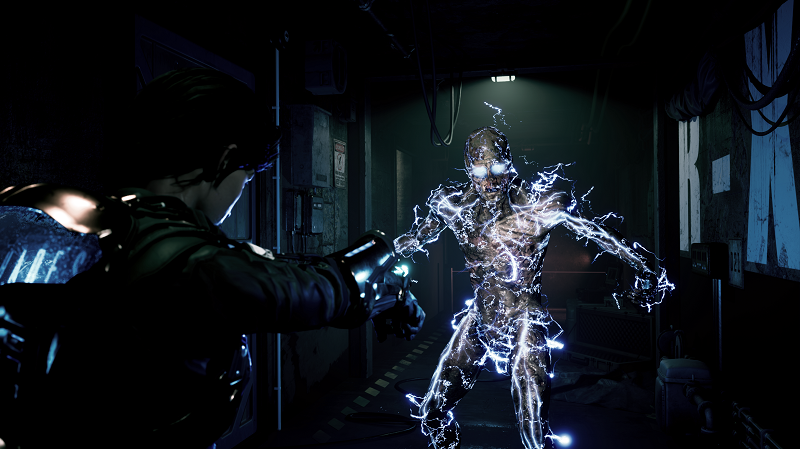 For the red enemies, they will not take damage or die until they’ve been fully frozen first, and then you can decapitate or shatter them completely. Even if you kill a red enemy, they may not be down for the count. A red ball of energy will rise out of the red enemy you just killed and float into any other nearby corpses to reanimate them. The energy gives previously blue Decoys a red charge as they reanimate. You can shoot the energy ball as it emerges to stop it from entering other bodies, but this requires an expert level of concentration and reload management to pull it off in time.

Another new addition to combat, the Frost Grip also has an excellent feature for crowd control, which you can use after pushing off an enemy that grabs you (similar to the defense items from the RE remakes.) This ability results in a ground smash that partially freezes all nearby enemies for a second or two, allowing you a moment to breathe and attempt fully freezing or killing the nearby enemies. This ability uses much of your frost meter, which is limited, so good resource management is required, but it adds an excellent extra level of tactical thought to the combat. 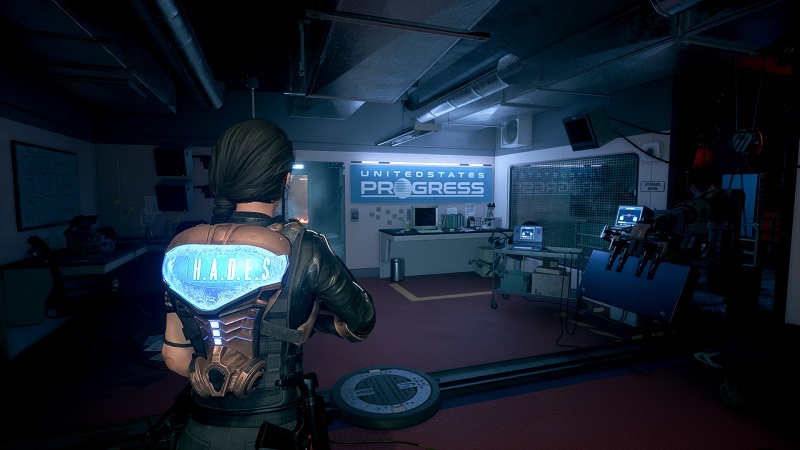 Outside of combat, the Frost Grip has a few other uses as well, including its use in many of the game’s puzzles, where you must use the spray to cool down overheated mechanical components or put out fires to progress past specific points. The mechanic adds a significant number of environmental puzzles to the more classic survival horror-style puzzles where you’ll be operating computers and solving logic puzzles. The puzzles were all compelling and fun in the short demo. Hopefully, this will continue through the whole experience when the entire game is released. 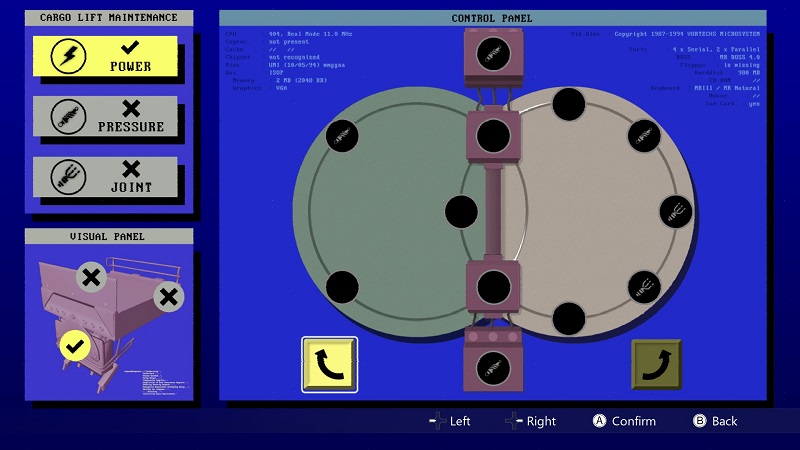 I played through the demo twice on different difficulty settings, each one lasting between 30-45 minutes. The experience was great between both, with an appreciable difference in difficulty levels regarding supply scarcity and combat. The normal mode had me scrounging for supplies and making every single shot count, but easy mode took a little of the edge off of these encounters. There’s also a ‘Nightmare’ difficulty which made progress incredibly difficult; this one is best reserved for later playthroughs after you’ve mastered some of the game’s mechanics. These options give all players different choices for tackling the experience, no matter your skill level.

These various improvements work together to make the game feel much closer to the modern 3rd-person Resident Evil remakes. It makes a lot of sense when considering that the Daymare project started as a modern remake of Resident Evil 2 before Capcom shut the project down to make their own. 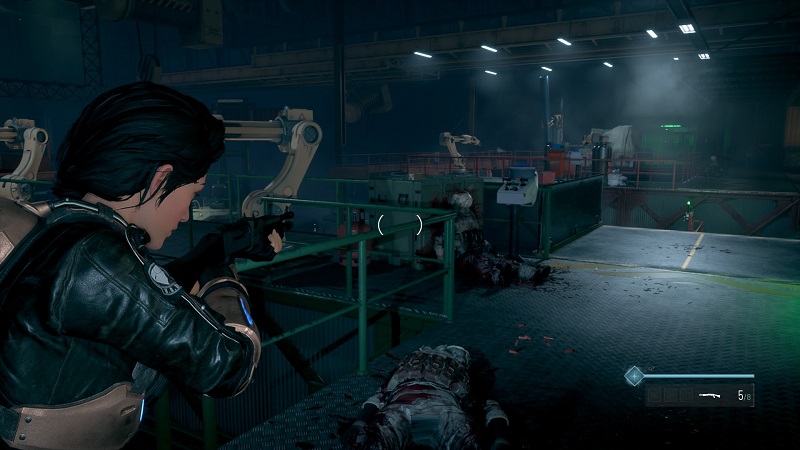 The free demo will be available to the public on PC during this week’s Steam Festival, so you’ll be able to check it out for yourself today, and it’s already available to Wishlist on Steam right now. The full game will launch on PC, Xbox, PlayStation, and Switch platforms later in the year.

If the quality and improvements from this demo carry through and stay consistent throughout the complete game, we’re going to have one hell of a strong survival horror title on our hands when it releases later this year. Stay tuned for any further updates as the development progresses, and hopefully, we’ll be seeing a release window announcement in the near future.