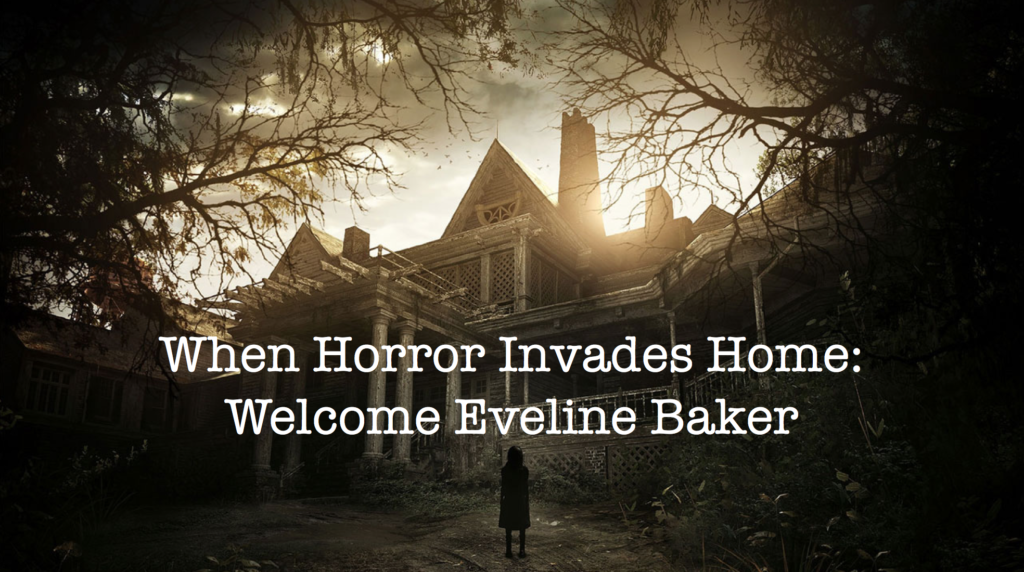 Deep in the bayous of Dulvey, Lousiana amidst the labyrinthine cypress trees, there is a mansion; within this sprawling mansion resides a family that is soon going to make the acquaintance of a monster. The old adage that appearances can be deceiving has never been more apropos. For the monster that they are about meet is a child — a child that is also a scientific experiment, a bioweapon, succinctly named E001.

A hurricane has brought Eveline, as she prefers to be addressed, to the Baker family’s doorstep. Prior to this moment, Eveline searched for something that is both tangible and intangible, and — sadly for Eveline — manufactured and inorganic, as is she. Eveline wished for a life outside of her predetermined designation as a harbinger of destruction. By divine providence or ill-fated fortune, she finally found a place to call home and a family to claim as her own. 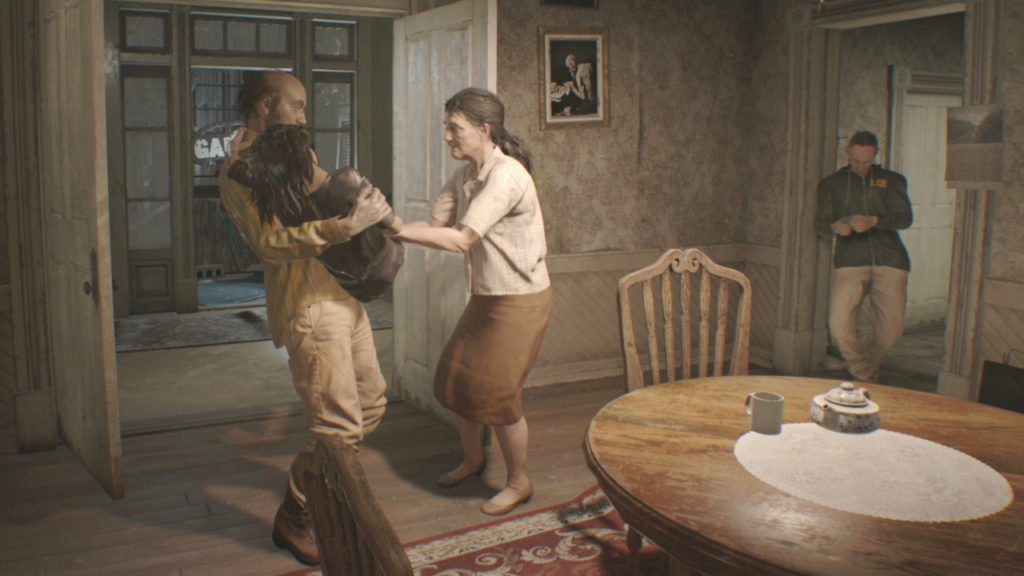 Before we delve into the inner workings of Eveline’s modus operandi, I’d like to introduce you to the Baker Family.

The father Jack, wife Marguerite, son Lucas, and daughter Zoe are so ordinary that they become extraordinary by game’s end. Their estate alone is a character unto itself. Exploring the grounds inside and out reveals a home that was well lived in and growing all the time. Unbeknownst to the family, their seemingly picturesque normalcy would soon come to an abrupt end. In 2014, their lives became forever uprooted when a ship washed ashore in a bayou near their farm, containing Eveline (E001) and Mia Winters. Mia, for the purposes of this essay’s description, will be kept brief. She was Eveline’s “mother,” but moreso a handler and leash to keep Eveline under control. 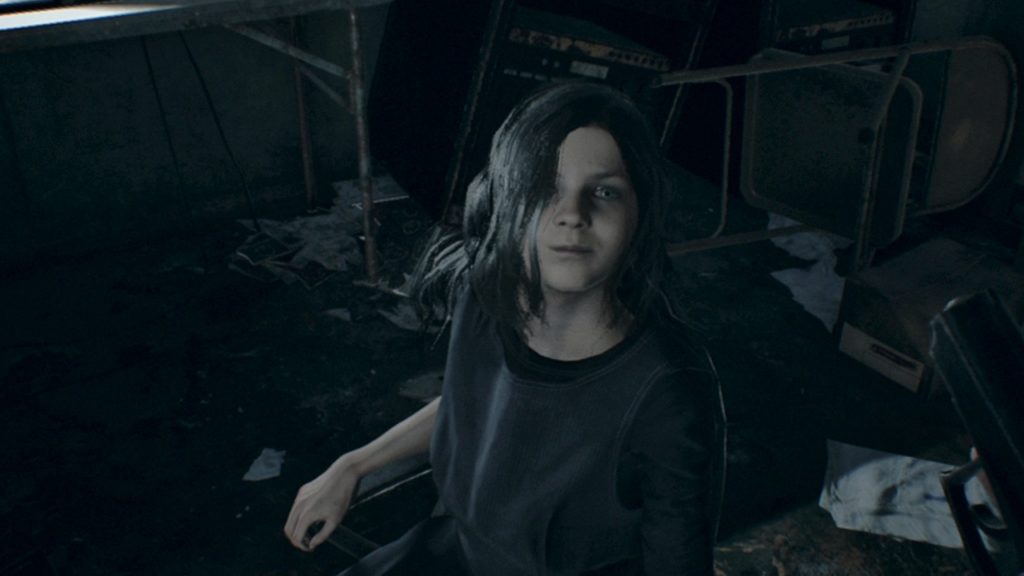 Eveline’s biological processes made her secrete a rampant parasitic mold that could be inhaled or ingested. The family all in various ways succumbed to the mold via Eveline’s presence, either through mind control or the spores existing in their bodies, changing their molecular structure. She infected the Bakers to attain the idyllic family that she sought. The constant experimentation and manipulation during her childhood took a dramatic toll on Eveline, stunting her growth emotionally. Her mental escape during the constant bombardment of dictates from scientists and her handlers was one of family, a yearning that grew to an obsession. 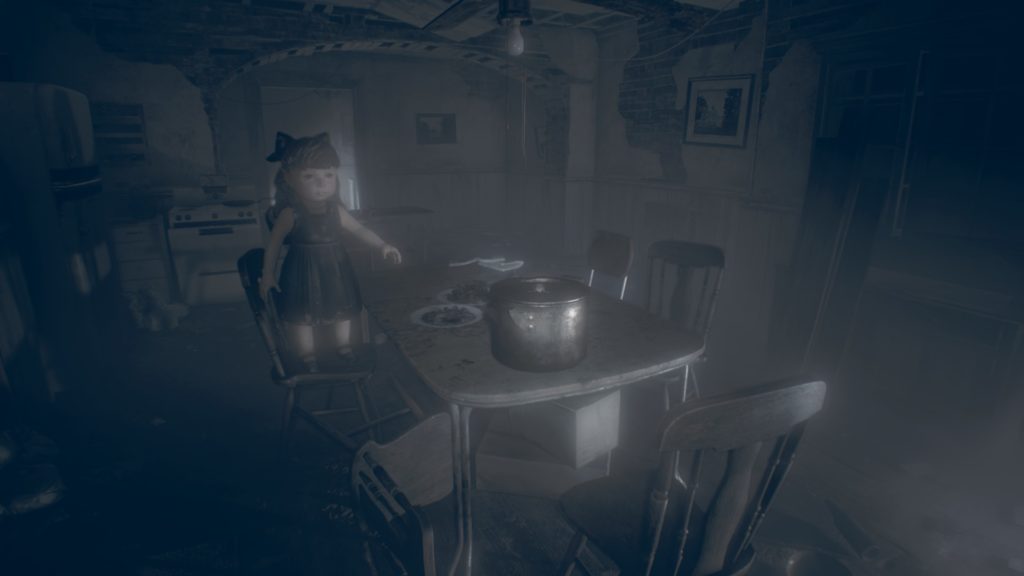 With the mind and feelings of a child and no resources to help process her trauma, Eveline was unable to healthily navigate the tumultuousness of heartbreak, deception, pain, anger, and sorrow that came from being a living experiment — only useful as a war dog. Thus, Eveline’s desire to mold a family of her own creation that would love her and her alone, without question and objection. For three years, Eveline held the Baker family captive, and with their help sans Zoe, abducted and killed several people. It is important to note that the father Jack and wife Marguerite were utterly overwhelmed by Eveline’s powers and became her primary juggernauts of violence. Their son Lucas, however, was never under the control of Eveline but relished in killing and torturing long before she arrived. As the only member of her family that retained their humanity and sanity, Zoe was alone and in constant danger from Eveline’s wrath and her parent’s ever-changing mood swings. 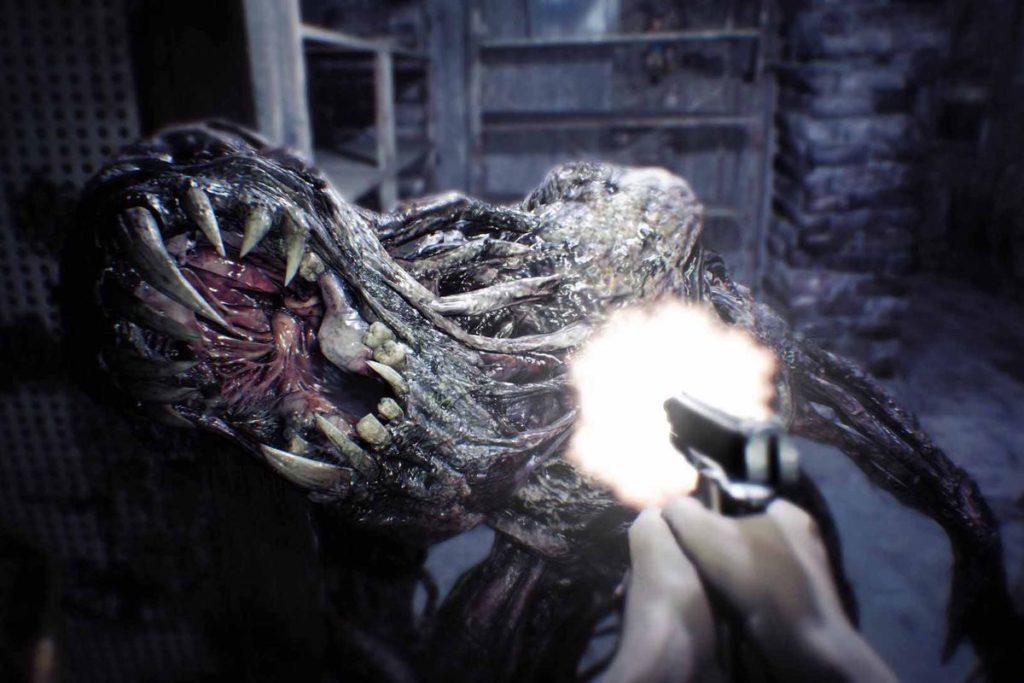 Those that were not murdered by Eveline or by extension the family were infected and transformed into the Molded. These inky black creatures no longer retained their human forms or individuality but were mere vessels that Eveline could impose her will upon and use as she was used to insight fear. Eveline was never content, but perhaps she was satisfied with her new family arrangement and the revenge that she was able to dispense. Also within this three year period, Eveline began deteriorating rapidly. The absence of serums to keep her cellular structure and appearance stable could not being administered. Thus, the octogenarian you see before you. 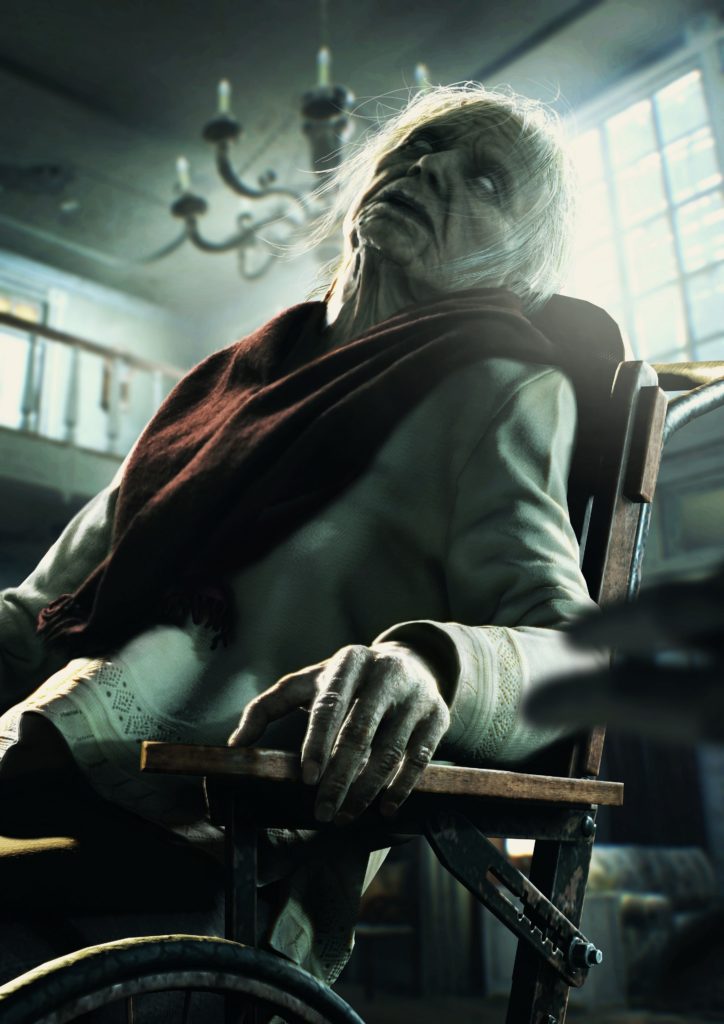 A question and a complaint about Resident Evil 7 has been its final battle against Eveline. The consensus has been the fight was too short, underwhelming, and far too easy. I would like to offer a counter-argument that Eveline was perfectly situated in time and space for her swift demise. She was growing old, more tired, weaker, and the control of her family was deteriorating. Not only were her adopted family members being murdered one by one, by us the protagonist, but her manipulation of the mold was becoming more erratic and less focused. Eveline’s imprisoned family was an extension of herself. Not knowing that family is freely received and with no healthy concept of its dynamics, Eveline crafted her own fantasy by force of will. When they were hurt so was she. When they died, a piece of herself went with them. With the family in breakdown, the destruction of Eveline’s mind and body was sure to follow.

The seventh installment in the Resident Evil franchise did something unique and transformative for the direction of the gaming series as a whole. The location along with its inhabitants was entirely new and thought-provoking. The smaller scale that the game embraced allowed the horror elements to be that much more effective in evoking terror and unease. No singular person, event, or entity is a scene stealer here, but in fact, the entire package on display acts as glue that holds the whole masterpiece together. Resident Evil 7 is a deeply layered game with many juxtapositions. The quiet, tranquil bayou meshes seamlessly with a house that seems as old as the environment itself. Similarly, the mold is nestled just so within the damp basements and bright hallway corridors. 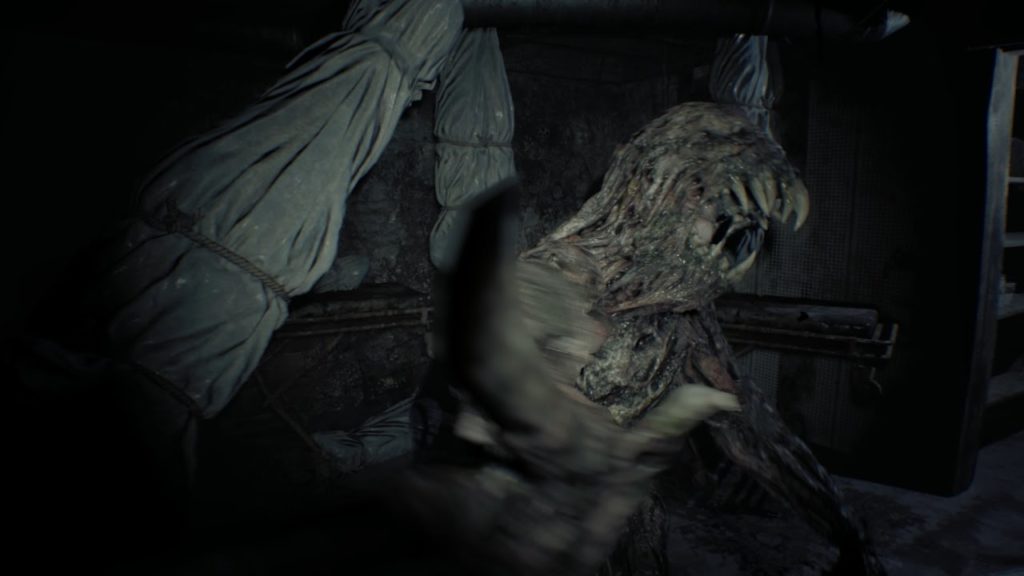 Only by playing this game in its entirety will you be able to fit the puzzle pieces together and see the big picture that this game is trying to tell. In fact, you can play this game without the context or Easter eggs of the previous Resident Evil games. The writing, central characters, and horror themes are just that well constructed. What still stands out for me as this ‘When Horror’ series comes to a close is the very concept and ideation of family and things that we associate with the home space itself. For example, the trappings of home, the people attached to the home, the memories that linger at home, the horrors and misfortune that ebb from home, and the disquiet we have when something is askew about home. 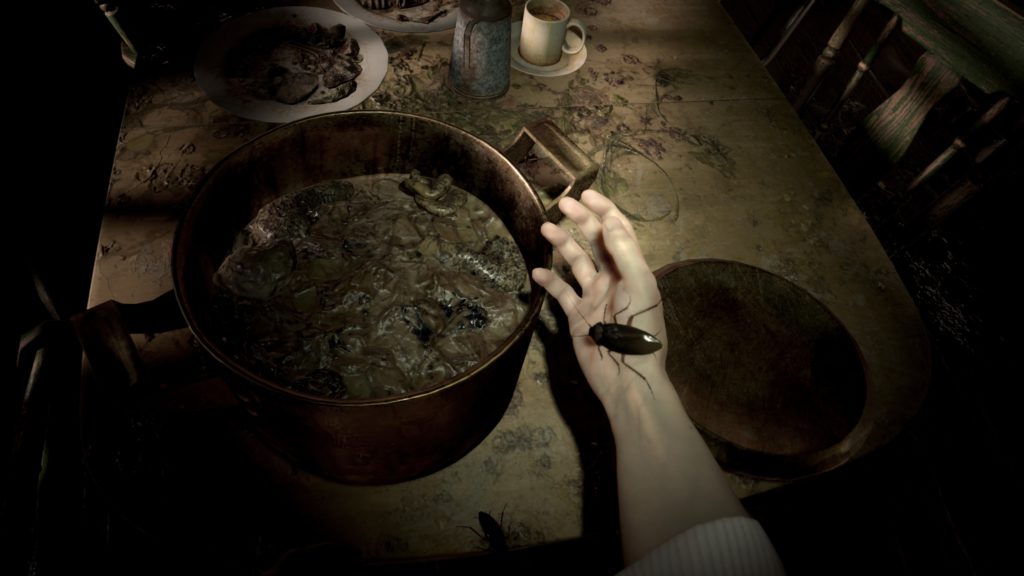 Is this why we’re so attached to the horror concepts that emanate from home? Our formative years are usually spent within one, whether good or bad, happy or sad. When we finally vacate our parent’s homes, we seek one of our own to furnish as we see fit. And when we leave this plane of existence, we take residence in our final abode, leaving our earthly house behind for another and another ad infinitum. For the next occupant, let’s hope you haven’t left any curse grudges, Silent Hills, Walter Sullivan’s, or Eveline Baker’s behind.

If this is your first time joining me at Rely on Horror, be sure to check out parts one through three of this series. If you’ve been with me during the entirety of this project, thank you for your patience, support, and comments. This series was almost a year in the making, and I had a marvelous time creating it and sharing it with you.