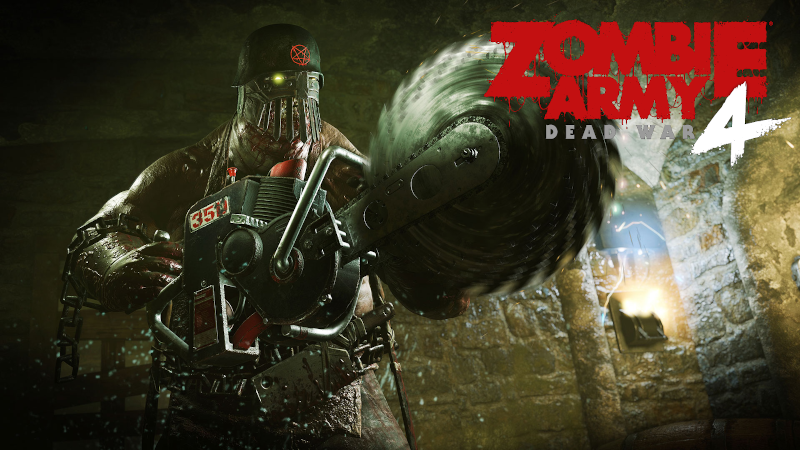 The Zombie Army franchise may have started off as a knockoff of the Call of Duty: Zombies mode, but it certainly has aged a hell of a lot better. Zombie Army 4: Dead War is the next installment in the Sniper Elite spin-off series. As you may have noticed, the ‘Sniper Elite’ portion of the franchise’s titles has been dropped as of the preceding The Zombie Army Trilogy, which is understandable as very little long-distance sniping actually goes on in this series anymore. The games have gone all-in on being cheesy cooperative action-fests, and they are better off for it.

Let me start off by saying that if you play video games for the story, you best look elsewhere. The ten-year-old child in your lobby — the one with the 100x kill combo in the midst of an argument with his mother about his bedtime — is going to deliver a more compelling narrative than what you’ll get in Zombie Army 4. The story can be boiled down to; Hitler summoned the dead in the first game, now there are zombies everywhere. The “characters” are milquetoast, and the plot is surface level, yet there is an admirable level of cheesiness that is increasingly rare in recent zombie fiction, which is worth some praise. Its brand of silly is the proper one too; I’d take Hitler escaping from hell over space demons and distorted space-time continuums any day (Yes, that was another jab at Call of Duty: Zombies. No, I’m not over it and never will be.). Despite all of this, you might as well leave the aforementioned ten-year-old with a 300 killstreak unmuted until zombie Hitler makes his debut, as the story very much boils down to just “zombies bad; kill zombies and Nazis.” 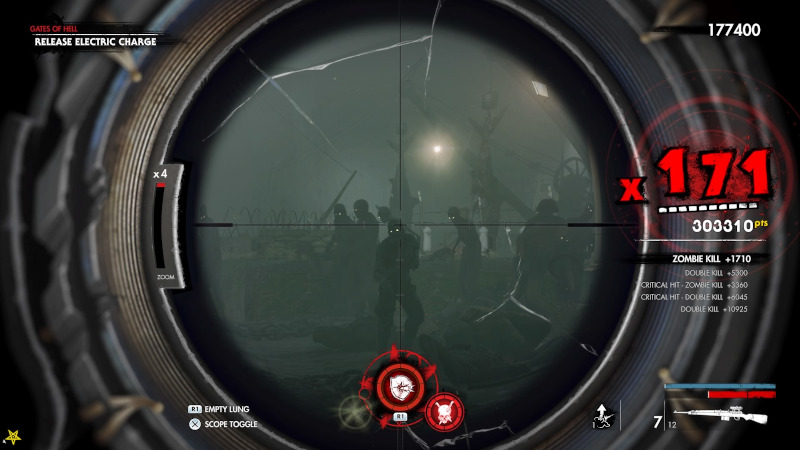 It’s clear that Zombie Army 4 isn’t here to tell you an epic narrative. The real reason this game exists is to provide a playground for you and several drunk friends to kill zombies in, and the game does a fairly successful job at doing so. In fact, Zombie Army 4 apes Left 4 Dead’s formula of having various ‘campaigns’ with four to five safehouse checkpoints. Along the way, players will tackle hordes of standard zombies with more powerful variants scattered throughout.

Speaking of enemy variety, Zombie Army 4 does a good job at covering all the bases you’d expect them to. There won’t be any wildly new enemies you haven’t already killed in a zombie game before, but that isn’t necessarily a problem in my book. What is a problem is the lackluster level design. Unfortunately, the development team has seemed to have taken inspiration from the only poor aspect of Devil May Cry V; every level is a boring worn down city with the same foggy haze. Okay, not every campaign is literally set in a war-torn city, but you’d have to forgive the confusion as the atmosphere is damn near identical throughout the game. I don’t know how one manages to make the swamp level feel indistinguishable from Hitler’s evil fortress, but Zombie Army 4 finds a way to pull it off. 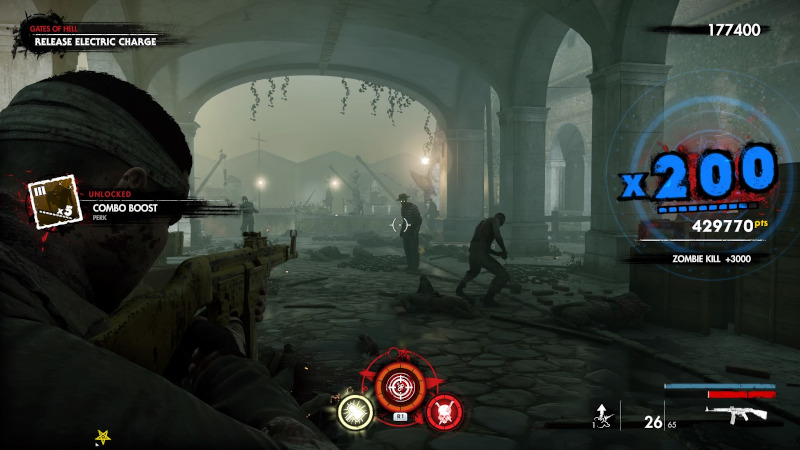 With all that said, Zombie Army 4 starts to excel in its more ‘score attacky’ roots. Take a look at the image above. Look at that insane and flashy combo meter. Building up a killstreak of that magnitude was one of the highlights of the experience, and the points received served as a worthwhile reward. As you’d expect with any ‘combo meter,’ in order to increase the combo you have to continue culling the undead hordes in a timely manner. However, the combo timer will accelerate quickly upon missing a shot, and as a result, a frenetic action game in which players are required to not only be fast and lethal but precise as well. This mechanic adds a bit more flavor to the otherwise run-of-the-mill combat that punctuates the rest of the game; I could easily see some players becoming addicted to building as massive of a score for each level.

Unfortunately, there is a catch: a score attacking frenzy seldom works in co-op. These combos aren’t shared across the entire team, only individual players. While there are plenty of undead on-screen during encounters, building up a juicy combo proves to be extremely difficult with a full team of four mopping up the cannon fodder. Instead of being about racking up millions of points with several hundred kill combos, Zombie Army 4 becomes about resource management, except the zombies are the resources and goal is to hoard the wealth. With that said, playing with friends is extremely recommended. Playing with random players is better than nothing, but in order to experience the Zombie Army series, you’ll need people to actually coordinate with. In solo play, most encounters can be overcome with the ‘runaway and shoot the zombies’ strategy which will cause combat to painfully drag on. Having multiple players doesn’t only increase the number of zombies, it opens the door for communication and maybe even a degree of strategy. 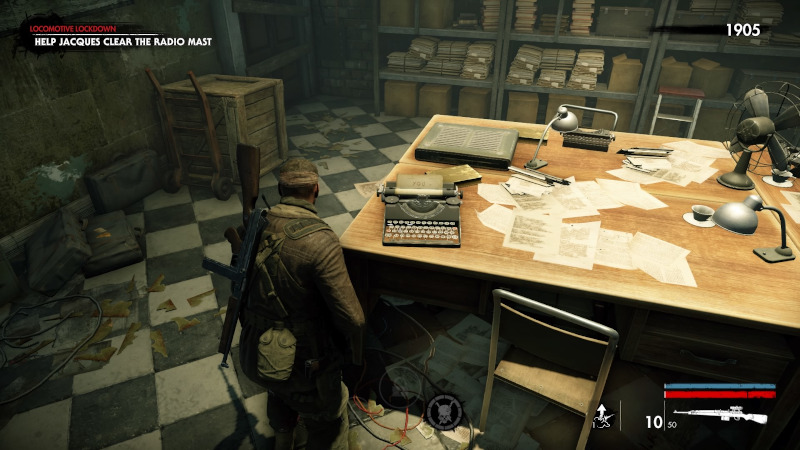 In addition to the nine full campaign missions, players will be able to enjoy four maps in the returning Horde mode. Horde modes are fairly straight forward by this point, and again, Zombie Army 4 does things by the numbers. Zombies appear in increasingly large and more powerful waves the longer the players survive. As each wave is completed, new weapons, items, and areas are unlocked enabling players to survive longer. This mode is probably where I had the most fun, which could be largely chalked to a pre-established fondness for the mode, but it also acts as a solid sandbox to enjoy the game’s gunplay and combat. However, while there are plenty of campaign missions to work through, there is an oddly small amount of Horde mode maps. To make matters worse, some of the maps are taken right from the campaign. 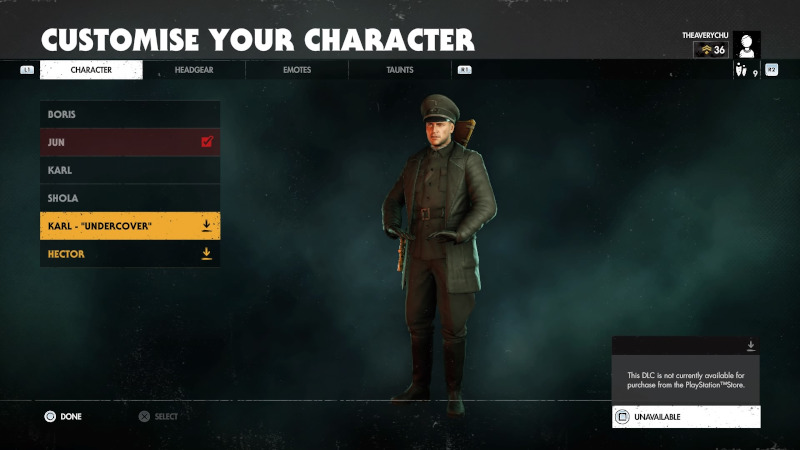 Outside of combat, Zombie Army 4 features a linear progression system, which is a welcome addition, and I found that I leveled up at a reasonable rate throughout my playthrough. Increasing in rank is oftentimes rewarded with new perks or the opportunity to upgrade weapons, both of which have a tangible impact on gameplay, making the endeavor worthwhile. Considering there is also a prestige system, fans of the series should have no problem getting plenty of playtime out of the latest installment. That being said, the character customization is fairly barebones; players can only customize the hats that each character wears and the handful of options provided are largely unremarkable. This would be an opportune time to mention that there is a paywall behind some playable characters and weapon skins, considering that this content was created before the title’s launch in addition to the timed Epic exclusivity deal, this decision feels pretty ‘money grubby’ and just calls attention to how barebones customization in the base game really is.

Antisocials and story nerds should steer far away from Zombie Army 4: Dead War, but if you’re a zombie enthusiast and are looking for something to scratch that Left 4 Dead itch, then go ahead and give it a try, especially if you have friends to join in. You couldn’t go wrong waiting for an inevitable sale (possibly bundled with the season pass), though.