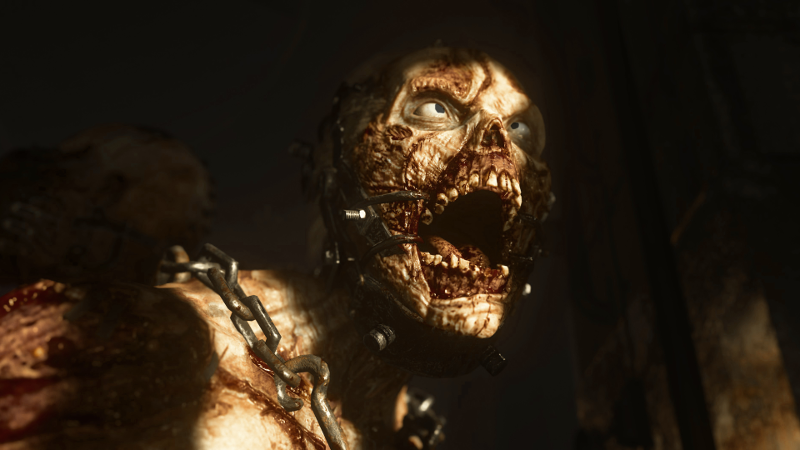 Last year, Sledgehammer released their most recent entry in the Call of Duty franchise, Call of Duty: World War II. Their take on the infamous Nazi Zombies mode has been rather controversial; for a variety of reasons. Despite the many discussions and debates, I’ve noticed that very few were discussing one of the major elements of World War II Zombies: the “heightened” focus on horror.

During World War II‘s marketing period, Sledgehammer insisted that WWII Zombies would be the scariest experience yet, and so I naturally wondered if this was all talk or if WWII Zombies was legitimately scary. After giving the main map in the base game The Final Reich a few tries, I found that WWII Zombies missed the mark for several reasons, and I would like to break down why. 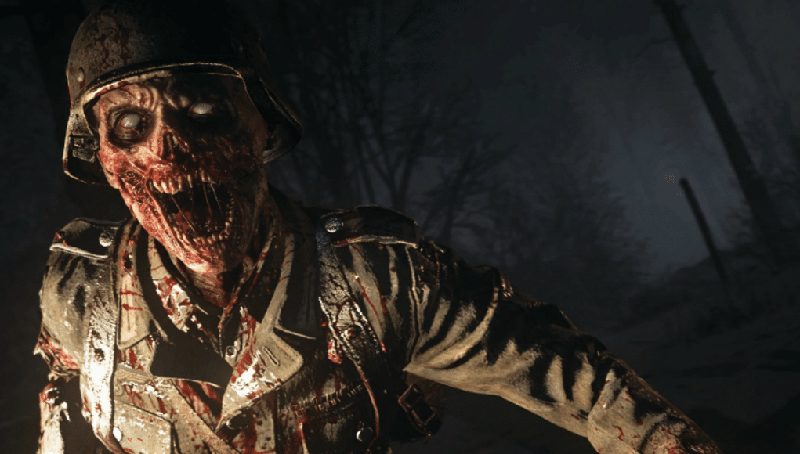 The thing about jumpscares is that they are never inherently scary. They are a method of releasing built up tension via something scary jumping out, accompanied by a loud noise. They get a reaction out of people because of that release while catching the audience off guard. Granted, I have an extremely strong bias against jumpscares. I find them to be a painfully obnoxious method of destroying any immersion I may have been feeling. Regardless if you agree with me or not, it doesn’t particularly matter in the case of WWII Zombies. I think most would agree that excessive, predictable jumpscares with no buildup are awful.

Now, I kid you not when I say this. Across several successive matches, I approached one particular valve, a valve that would need to be activated in order to open up the next door to progress in the map. The first time I did so, a zombie burst out of the window located right next to the valve. Needless to say, I was consumed by pure dread. The next match, I approach the same valve. You’ll never guess what happened…A zombie burst out of the same window. I was quivering. The third match, same valve, same window, and guess what happened…A zombie burst out of the window. I paused the game, grabbed a trash bag and dumped my entire shelf of horror games into it. I knew that I wouldn’t have any use for those games now that I had WWII Zombies. 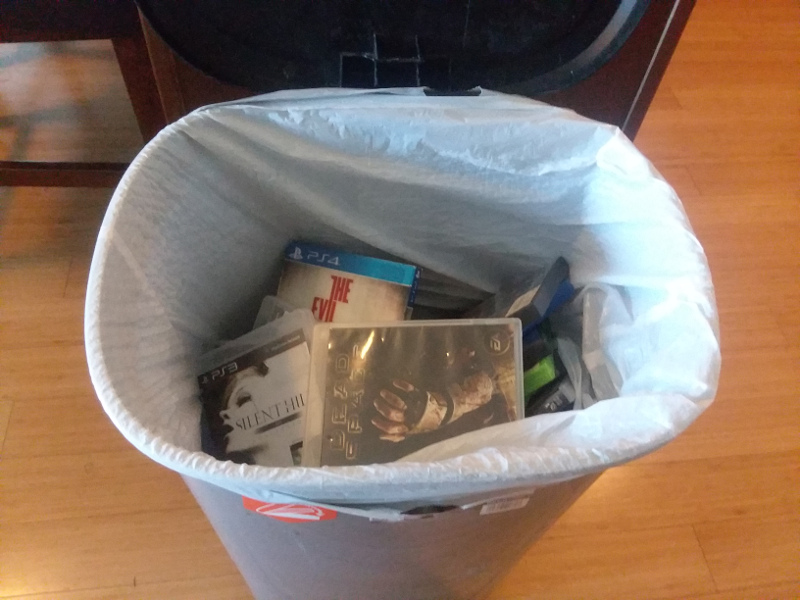 Alright, enough with the sarcasm. The more I played this mode, the more I realized how desperate the game was getting to get me with these jumpscares. It appears that Sledgehammer was utilizing some extremely strategic zombie spawning. This game is viscously yet unintentionally beats the viewer into expecting zombies to just magically appear out of thin air. Jumpscares are WWII Zombies‘ bread and butter. If the horror can be summarized as ‘things not being there’, and then ‘things suddenly being there’, then the audience is being offered an incredibly shallow experience, among the shallowest the horror genre can offer.

If you are old enough and you intend on playing WWII Zombies, take a shot everytime a bad jumpscare happens. By round five you will be in the hospital. Not because you overdosed on alcohol, but because you will be dying of laughter at how lame these jumpscares truly are. 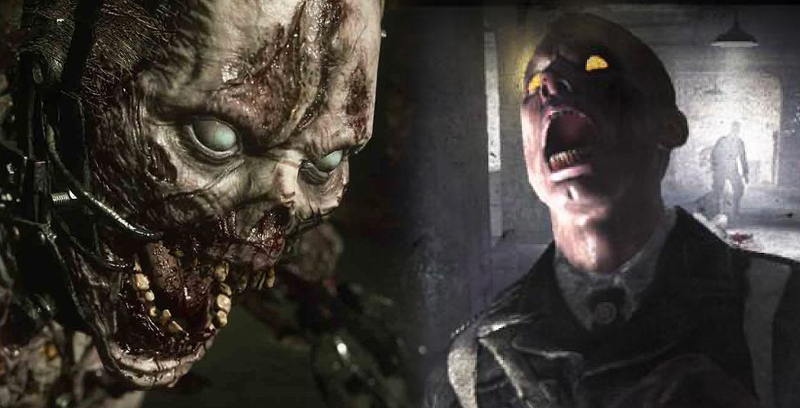 Let’s start talking about the zombies themselves. On a visual level, they actually look pretty alright. The zombies are a lot gorier this time around, often times missing an eye or half a jaw. I do appreciate the fact that the undead in WWII Zombies feature various ‘metal bits’ that are impaled and attached to them, which serves as a visual reminder of the experimentation being done by the Nazis in this story’s universe. Some of the special zombies have a much more skeletal look to their appearance which is also rather neat.

This all contrasts significantly with Treyarch’s first game to introduce Nazi Zombies, World At War, which showcases undead that are mostly intact, giving them a mostly human appearance. All of the zombies wear the standard German soldier uniform, and their gray skin and the yellow glowing eyes although there are story justifications for them, give a supernatural vibe. Even zombie animations lend themselves to this idea, ranging from the way their arms flail about, to how they violently shake their heads from side to side during the game over screen. It’s because of this ‘supernatural vibe’, coupled with my lack of interest in body-horror, that I find World At War’s zombies to be scarier. However, I can still see why one might find the undead in WWII Zombies scarier as plenty of effort went into designing them.

Unfortunately, the same attention that was put into how the zombies looked wasn’t put into the environmental design, at least not in the map The Final Reich. There are a few spots that stand out, such as some of the torture/experiment rooms full of sharp objects and metal contraptions, and literal rivers of blood. If you are into that kind of thing then I guess that WWII Zombies has something to offer you. Beyond those few instances, any form of creepy imagery is scarce and/or doesn’t stand out. Of course, this issue isn’t helped by the fact that the game can be excessively dark on standard brightness settings, which makes it more challenging to appreciate the actually scary bits (including the zombies themselves). 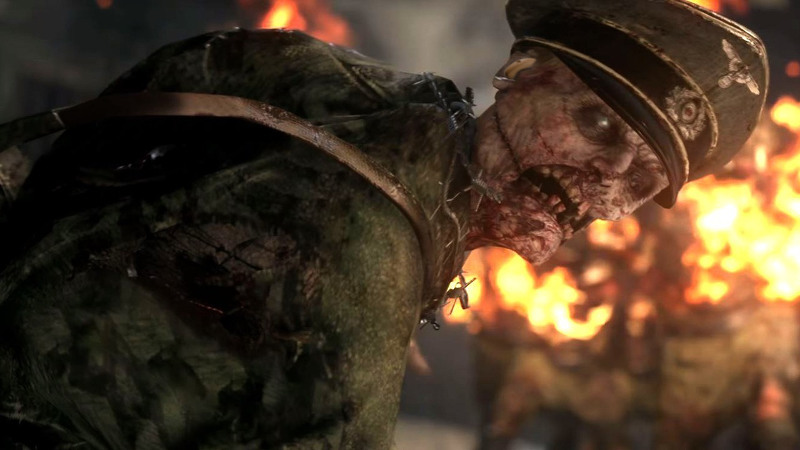 When it comes to the zombies themselves, they sound…fine. The problem is that WWII Zombies doesn’t go the extra mile, to be more than just serviceable. When the game isn’t bombarding you with jumpscares, the noises the undead make are of the typical ‘hissing’ and ‘growling’ variety that we see so often in zombie media. The only thing unusual about how they sound is the gibberish the odd zombie might spew that almost sounds like a language. An interesting idea, and I’m not entirely certain about it. Perhaps it would have been scarier if the zombie speech was a bit more audible and recognizable (zombies speaking actual German) as it might give an extra layer of humanity to these monsters, potentially making their cannibalistic behaviors more unnatural feeling. This idea would have to be carefully executed, with lots of sound-mixing, as it could easily sound incredibly laughable. Unfortunately, this idea in its current form isn’t surreal enough for me to stand out against the horde of growling coming from most of the zombies.

My bias may be a bit at play here, as I personally never cared for zombies of the 28 Days Later variety. That being said, I think it is fair to say that the idea has been done to death so many times across countless zombie games and movies to the point of oversaturation. It would have been extremely refreshing if Sledgehammer decided to do something different. Perhaps I would be more forgiving of the boring-sounding monsters if WWII Zombies made up for it in the music department with an excellent and memorable soundtrack to accompany the mode, but alas, there is nothing noteworthy.

For an example of sound design done right, we can look yet again back to World At War. I remember getting spooked on Nacht Der Untoten when I would hear the demonic, otherworldly, and overlapping moans of the undead as they slowly tore barricades down from other areas of the map. I wouldn’t need to see the zombies to be scared, and just being aware of their presence, and the anticipation for their arrival added tension. However, World At War went even further, as nearly every unique sound effect for the mode was used to enhance the mode’s creepiness. Youtuber LonelyMailbox has a video in which he goes through a lot of the game’s miscellaneous (and sometimes cliche) sounds. Definitely check it out if you have the time. Unfortunately, WWII Zombies suffers from a general lack of attention to sound design, which is a massive missed opportunity for some quality horror. 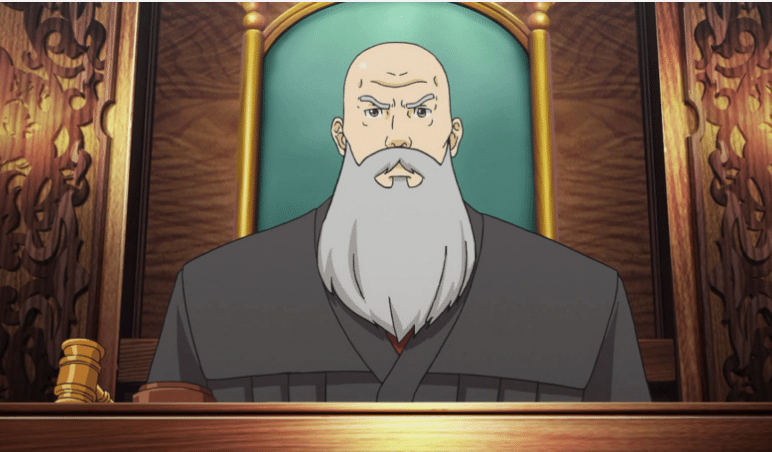 I’ve spent a lot of time ranting in this article, so I want to figure what could be learned from WWII Zombies. We can learn that horror isn’t simply a collection of sudden loud noises. Fear of the unknown, the suspense of a seen or unseen threat lurking about, creates the anticipation and the excitement that comes from horror, and it’s rather difficult to get excited for the moment that same window bursts open for the eighth time. We can also learn that thought and care needs to be put into these fictional worlds, their atmospheres, and their inhabitants. It doesn’t matter what is jumping in front of the viewer’s screen if the subject itself fails to strike fear in the viewer. Jumpscares are momentary flashes of excitement, an excitement that is often times quickly forgotten, but if an audience can be scared through the actual substance of the experience, then that horror will stick with the viewer. The actual substance is why a decade old game in the same series, that wasn’t even trying too hard, is more effectively scary than the franchise’s newest iteration.

Perhaps the focus on horror is how Sledgehammer will differentiate their version of Zombies from the competition, in which case, we can only hope that they learn from their mistakes. As for Black Ops 4, it appears that the shenanigans with WWII Zombies hasn’t rubbed off on Treyarch at all, as the nasty trend of convoluted nonsense seems to be going strong. This mode was something I loved during my youth, and it’s incredibly frustrating to see it constantly mishandled and misunderstood, but hey, with Black Ops 4 on the way, I can look forward to playing inevitable remaster of all the good maps from World at War and Black Ops…again–hopefully jumpscare free.

This main menu is way creepier than it has any right to be. 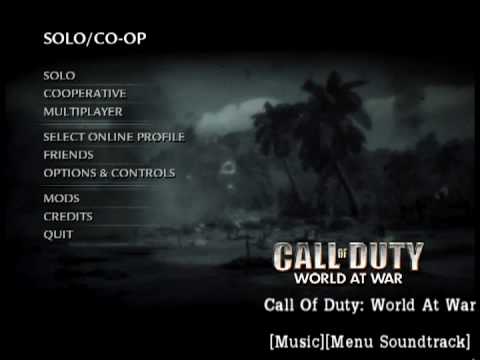