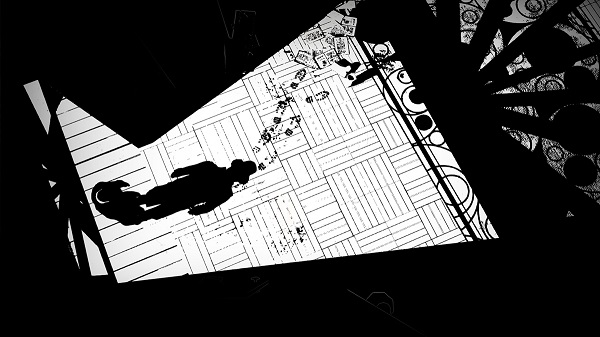 White Night is, in the same respiration, a breath of fresh air and an exasperated sigh. OSome Studios has mostly succeeded in delving into an oft-unexplored period of time in the gaming world, and has brought a lovely aesthetic along with it. Unfortunately, some small mis-steps ended up leaving me cold in the night.

Set in the 1930’s during the Great Depression affords White Night a historical texture that most games lack. Whether it’s the vehicle you drive in the nifty opening credits sequence, the style of prose you read in the various diaries scattered about, or the references to then-current events, it all feels more grounded than most horror games. The main character’s voice seems anachronistically modern, but that could be all those classic movies I watched telling me that he should have a Transatlantic English accent. The music is also tied to the setting; Jazz music was affording people more happiness than what little they could buy, so it feels right when you hear occasionally hear it echoing throughout the experience.

White Night begins with our playable character almost running a woman over, veering off of the road at the last possible moment. From there, he walks up to a mansion that very clearly has Something Wrong With It. The whole opening sequence is great, except for the limp your character exhibits after the car accident. You have to slowly trudge along for the first fifteen minutes or so until you sit in a chair (the game’s save points) and your leg magically heals. MIRACLE OF MIRACLES. If he had the injury for a while, or if it factored into the story at all, I wouldn’t have had a problem with it, but it’s trivialized so quickly that it feels meaningless. Once you get inside the mansion under the pretense of finding help, everything gets better. 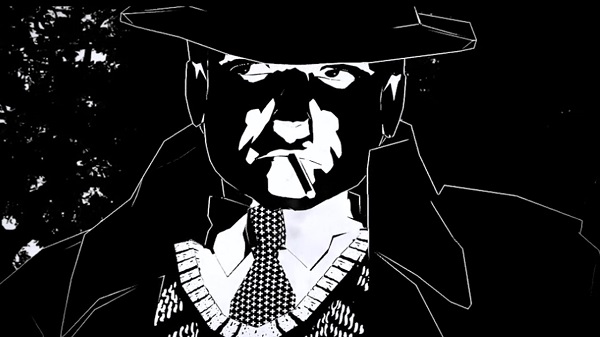 The waning light of the day is now gone and you have only the windows and a scant few electrical lights in the mansion to feel secure. It’s here that White Night‘s light-based gameplay begins to shine. You can quickly find some matches that have interesting effects on your environment. The matches provide the one color – a yellow flame – other than black and white that you’ll see, and are a finite resource. You can use them to light lanterns next to chairs in order to save, illuminate dilapidated rooms, and protect yourself from the (surprise!) ghosts inhabiting the mansion. It wouldn’t be a spooky mansion if there wasn’t something or someone haunting it, right? Not only are there ghosts waiting in the darkness, but you’ll also discover that this residence has a less-than-savory history. 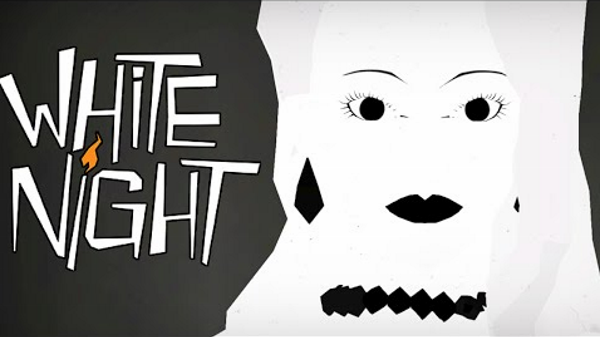 Diaries from various points of view, old daguerreotypes, and newspapers help fill to fill in the blanks (don’t they always?). There’s also what appears to be a friendly ghost, though the graphical style has the unfortunate effect of making her look like a blow up doll. She leads you through the mansion as you solve puzzles, usually of the ‘get key, open door’ variety, though they occasionally dare to be a bit more complicated. You have to be mindful of your matches at all times, as being in the dark for too long will kill you. Carefully exploring is satisfying due to the inherent risk of diving into the darkness without an escape route. The shadows are the ghosts’ habitat, but turning on an electrical light will dispel them, and this is your only way of combating the shadowy figures. Getting to one of these switches is a triumphant moment; the ghosts are terrifying when you try to sneak by to get to the next light switch, but not always for the right reasons. The slightest bit of contact with a ghost instantly ends the game, and the fixed camera can be deceptive when wandering unknown halls. When you know where you’re going, it’s exciting trying to juke them out and escape into a brightly-lit room, but there were too many times when the camera would switch and I would go straight into death. Save points are frequent enough that it isn’t too frustrating, but be prepared for some unnecessary repetition. I do wish that the fail-state animation was more unique, as being touched by a nightmarish spectre makes your character look like he’s swatting annoying flies only to be interrupted with a game over screen. 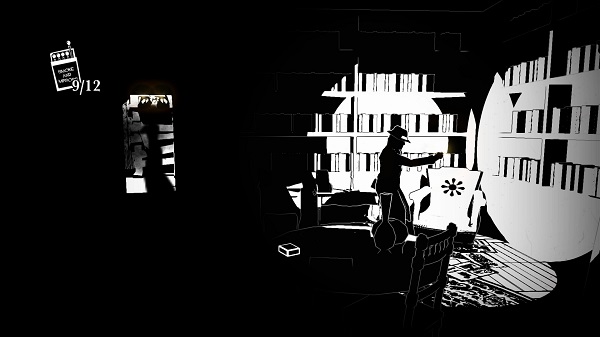 If you haven’t noticed by way of these screenshots, White Night is all about stark, beautiful contrast. The art style is fantastimagical and directly ties into the puzzles and game mechanics. It’s great fun just to walk around at first, though the novelty wears off once you start realizing how damned hard it is to see anything. The ghosts (as seen above) easily fade into the darkness and become even more difficult to avoid. I’m not averse to hard games, but it feels cheap here and I rapidly found myself annoyed with the choice of style over visibility. I turned up my brightness and it helped a tad, but you still have to pixel hunt for some of the light switches, which isn’t exactly riveting.

Traversing the mansion and discovering the former inhabitants’ pasts is interesting until late-game plot shenanigans threaten to undo the whole thing. No spoilers here, but I was significantly more interested in where I thought the plot was going than where it ended up. Horror games love to shock players, but not every game needs to have a surprise towards the end. For those of you in the “if I know there’s a surprise, it isn’t surprising” crowd, I apologize, but I’m making a statement here, dammit!

As excited as I was to have what feels like a spiritual successor to Alone in the Dark, White Night falters in a few ways that are ultimately detrimental to the entire experience. White Night is the perfect example of a solid concept marred by the sometimes-unnecessary desire to pull the rug out from the intended audience.