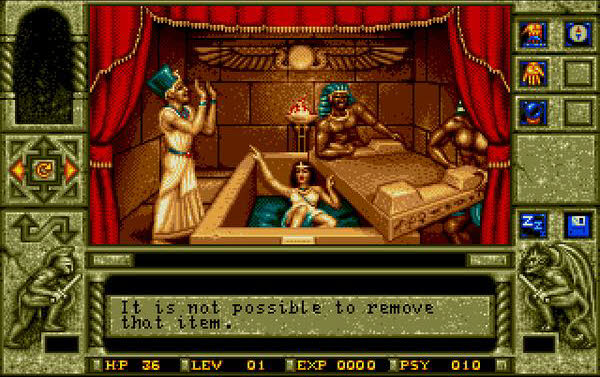 Many people criticized the Halloween special that I did this year, most of them raising legitimate complaints in regards to some of my decisions. Super Metroid and Half-Life were choices that people heavily criticized and many questioned why they were put on the list, but titles like Clockwork and today’s game were not. I still stand behind most of my choices though and I still support the idea that Super Metroid qualifies as a horror game, but I also admit that I made a mistake. I thought this was the kind of content the readers wanted and I was apparently wrong, my decision to put FEAR on the list as a fanboy-joke was just stupid and I apologize. I still don’t condone some of the more harsh and mean comments I received, but to make it up to the nice readers who provided genuine criticism, I am going to review Waxworks today.

Waxworks was released in 1992 and came to us from the same developers as Elvira II, Horrorsoft. Just like Elvira, this game is a point&click classic in which you must save your family from an ancient curse. To this end, you must travel to several points in time and take on the role of an ancestor hunting down his evil twin brother in each scenario. In the London stage you play as the brother of Jack the Ripper who has to clear his name, for example.

The plot is somewhat hastily introduced, as you literally turn on the game and get a magic orb shoved into your face with the spirit of your uncle in it. I allowed this exposition to sink in though and after exploring the waxworks for a while, I actually started to appreciate the story. The idea is fairly unique and the Timesplitters-like approach to story-structuring allows for a lot of variation in the levels and scenarios. I was excited to start my first adventure! 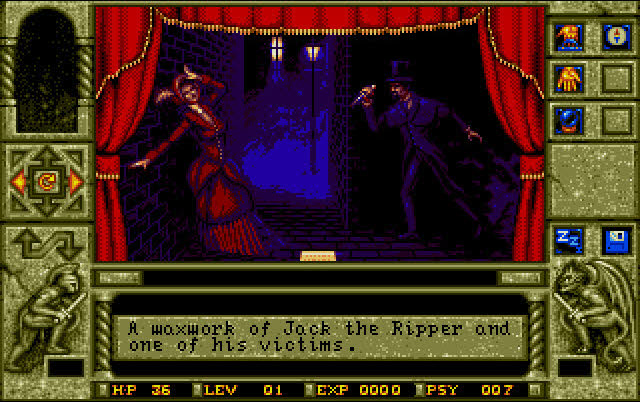 It’s very easy to understand the game, as was always the case with the best point&click adventure games. You move through areas by moving your mouse towards the corners of the screen, which allows you to move forwards, backwards and turn left and right when you click. You can also click on objects whenever something catches your eye, this will display a number of simple options on the right side of the screen (Examine, Use and the likes). Some objects can be picked up by dragging it to the bottom of the screen and you can use the item from inside your inventory afterwards.

Everything is really self-explanatory and easy to understand, which is great for people who really don’t want to play the game with a manual on their lap. The only feature that Waxworks adds to the formula is the orb with your uncle in it, which can be clicked on in the menu in order to ask some questions about the story or receive some simple hints.

Waxworks also uses a very interesting combat-system, which is still nice despite of been lifted straight from the aforementioned Elvira series. When you encounter an enemy you switch to a combat stance, which means your character draws his weapon. You can then start clicking the enemy in order to repeatedly attack him/her/it, but the twist is that you specifically attack whatever area you click on.

This allows you to get a bit more tactical during combat, taking down parts of the body in any order that you wish. At one point I was confronted by a zombie, who I immediately began attacking on the face. This eventually caused the guy to lose his entire head, which also left him with a lot less accuracy than before. This is very clever and encourages you to experiment a lot more. 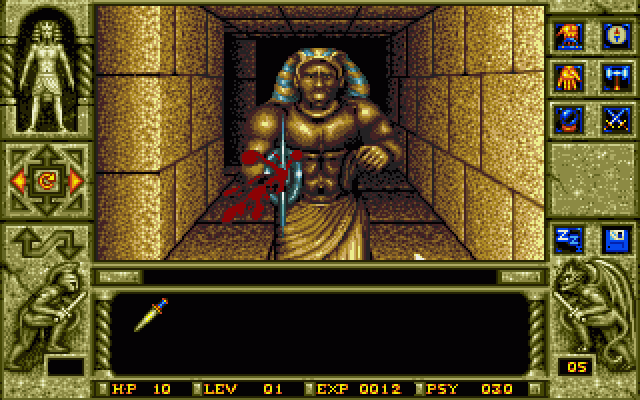 Killing enemies also grants you experience and getting enough of that gives you another level up. Leveling up restores some of your health and, I assume, improves your overall accuracy and endurance. Dead enemies also have another use, because they are pretty much the only way to find your way through the awful levels. This probably won’t earn me a lot of friends, but I personally found playing this game to be very tiring, primarily because the levels are monotone and confusing.

I started out with the pyramid level, but after a while the paths branch so often that the only way to keep track of where you’ve been are dead bodies. There is no in-game map, not even as some optional item you can come across, so the game seemingly expects you to take out some paper and draw your own maps. I think there might be an audience for this, since Legend of Grimrock also offered a mode without map, but I have no room or paper enough to document entire labyrinths.

I really can’t stress enough how monotone the levels are, which becomes even more obvious when you come upon a branch and all the paths are completely symmetrical. The pyramid level might have been a poor choice to start off with, since there is admittedly very little you can do with brown bricks, but all the other levels had the exact same problem. The level-design is just downright lazy, with no effort been put into actually designing rooms with recognizable elements to them.

There were a handful of statues scattered across the maze, but I just ended up randomly running around until I tripped over the next puzzle. I didn’t finish the Egypt level in the end, but I noticed, upon looking through a walkthrough, that I missed some random items on the first floor that I would need later on in the level.

This means that not only did I have to get lost on each individual level, but also in the maze as a whole. Just knowing that is enough to make the entire level feel like a drag right there. It’s even more of a shame, because I looked up some gameplay from Elvira II, which was released a year earlier, and that game actually looked like thought and care was put into designing each area.

On the more positive side of things, it’s fair to say that the game looks very, very, VERY nice. I really enjoy the visuals, monster-designs and the gory presentation. The most awesome feature I ran into are the wounds that start forming on the opponents when you attack them, they are not entirely random, but it’s still very neat to see and makes combat feel even more satisfying. The game is also famous for the many death-scenes it features and a lot of work was clearly put into making as many original Game Over screens as possible.

These feature a healthy degree of realistic gore and I noticed that the artists often displayed muscle in the drawings, instead of just covering everything up with blood (I thought that was really nice for a change). Along with a very good save&restore system, this makes dying more of a fun distraction than a major annoyance. 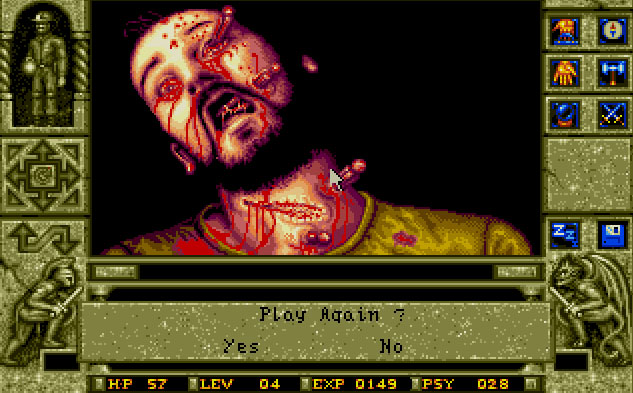 That is about all the horror this game contains though and I personally started to question why people recommended me this game in particular. Only two of the four levels actually feature enemies fitting for a horror game (plant-mutants and zombies), neither of which are very scary. The death-scenes are a very common argument, but if we judge it by just that, then the game might as well have been a DeviantArt account. Compare that to Super Metroid, which takes place entirely on an abandoned planet overrun with scientific failures and alien monsters. It’s more fast-paced and you are more powerful, but it’s also constantly eerie, has no friendly characters and you need to manage your resources carefully.

I could go in-depth about this, but Ryan already covered this topic once and the two of us share exactly the same opinion on this. It might be because I was accidentally exposed to a lot of horror in my childhood, but I personally think that the eerie atmosphere on Planet Zebes is more frightening than the well-drawn deaths in this title. To summarize the point of this paragraph: the game didn’t scare me.

To end this review, let me just say that Waxworks is a very difficult and punishing horror-themed puzzle game that definitely deserves to be the cult-classic that it now is. The game is a little too harsh for a mainstream audience, as a single stupid save can force you to start all the way over again. You have to be constantly alert and always think every move through, which give it the same appeal as some other trial-and-error titles. That’s not a bad thing though and while not immediately appealing to me, I can at least see why other people would enjoy it. I would recommend people to watch a Let’s Play of this game, but if you are confident in your patience and skill, then you can get this game for roughly 6 dollars on Good Old Games.