What makes a horror-themed game? - Rely on Horror

What makes a horror-themed game?

In Japan, the new Wii game, “Pandora’s Tower: Until I Return to Your Side,” has been released. It is a very under-the-radar RPG that most certainly would never be considered a survival-horror game by any stretch. However, it definitely has elements that could make a wonderful horror game.

In it, you play as a former soldier named Ende, who’s story is told through strange paper doll memory scenes. From what I have pieced together, he fell in love with a girl named Ceres who was a bit of an upbeat oddball but was selected to perform at the kingdom’s harvest festival. However, things go bad as a curse is cast upon her and she becomes a threat to the kingdom, leaving Ceres and Ende to flee and get aid from a strange witch-like merchant named Graiai. The curse on Ende causes her flesh to slowly rot away and strange living growths to form from her body, very Lovecraft in a way. To appease this curse, she must eat the hearts and flesh of monsters.. A horror that revolts her and makes her vomit, and we as the viewer have to view her struggle of both accepting this fate and pain-stakingly eating her first heart. Likewise, Ende has to deal with this horror and his own hardships as he’s the one who has to fetch the flesh and hearts for her. The beasts he kills are not inherently evil either… The first boss does not attack him or present any immediate threat, being a giant yet peaceful golem that makes plants grow and tends to it’s own personal garden. It’s not until you start trying to strip it’s flesh away that it becomes violent and tries to defend itself as you murder it. 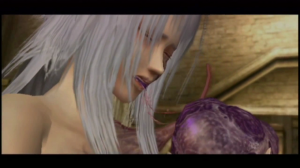 Trust us, she’s not enjoying this one bit.

There is more to the game and it’s darker themes, but would I classify it as a horror game? No, in the end what I am doing in the gameplay is killing monsters with a sword and chain-like weapon and there isn’t anything scary or creepy to speak of. However, what it does with it’s narrative and how it supports it in it’s gameplay is where the line becomes thinner, and I would start to possibly qualify this game as a Horror-Themed title. This game got me thinking of something we have to tackle all the time here at Rely On Horror all the time when we are deciding what to cover: What makes a horror-themed game?

Some would answer this immediately by saying a game must be scary or creepy, or the gameplay needs to have you faced against difficult odds with limited supplies. However, that is a little old-fashioned and clear cut for a genre that is always expanding. These titles should definitely exist and are strong elements found in many horror games, but in the end are not what qualify a horror game. Games not meant to be horror in any way can feature a scene that is intentionally or unintentionally scary, and games can feature difficult challenges with limited supplies as well without being a horror game. There are definitely games you can look at and know right away they are horror games, but what makes a horror-themed game? 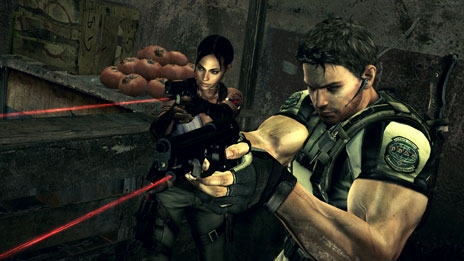 Here’s another example, Resident Evil 5, a game that is not really scary in any sense and definitely much more action-focused, is still considered a horror game in general. Why is that? Is it just because it comes from a series that is traditionally a horror-based series? Is it horror because it has big monsters that are a bit unnerving at times?

Not specifically. The truth of the matter is that it is a horror game because we perceive it as one. Let me explain.

What is horror? It’s something that unnerves us, creeps us out, keeps us on edge, disturbs us, fascinates us… Well, it’s many things. And not every two people will share the same definition, for what each person finds scary varies from individual to individual. With that, horror doesn’t need to be jump-out-of-my-seat scary. Some of the best works of horror in all mediums are a lot more subtle, things that stick with us long-after we’ve completed them but might not be downright terrifying. Horror is what you perceive it to be, as what you perceive to be scary personally. As a website dedicated to horror-related stuff, we have to make the choice of what is horror-themed ‘enough’ to cover.

Castlevania is horror-themed to us, but that doesn’t mean it in particular is a survival-horror game.

Some stuff is clear cut; Resident Evil, Silent Hill, Dead Space, etc., are all clearly horror games at heart and are indeed well-recognized horror franchises. However, Dead Rising isn’t scary yet we cover it. This would have to do with the game’s themes that cover a whole other area of horror that isn’t even made to be that scary: Horror-Comedy. Horror-themed games can simply be such because it features Zombies, which is a horror trope that leads our minds to associate it with horror media. It could feature a single psychotic murderer, twisted monsters, atmospheric settings… Or in the case of Pandora’s Tower, an unsettling and dark narrative. Horror has taken on a meaning in media where it simply means it is entertainment that is linked to the darker workings of our minds, the parts of ourselves that get enjoyment out of things that we shouldn’t. It is linked to the human psyche and how what terrifies us fascinates us, the part of us that knows turning around that corner with the weird noise coming from it is a bad idea in every sense of the word but our natural curiosity still pulls us towards it to check it out. There is many types of horror and only certain types of it appeal to certain people, but what horror itself has come to mean in terms of media is entertainment through the dark pleasures we enjoy. Horror games have never been horror games because of specific type of gameplay like the classic Resident Evil style (which is just a twist on an Adventure game anyway), but because of it’s themes and content that appeals to the darker corners of our minds.

While we have our own personal biases to cover certain games we personally enjoy, we are also always interested to hear in what you guys like to learn and hear about. Besides, do you think I have horror media down to the bare minimum of what makes it what it is, or do you think my reasoning is full of shit? What is horror to you, both in a general sense and in what you personally enjoy from horror games and media? What would you like to see us cover you think is related to the topic? Leave a comment as feedback is always the surest way to let us know.