Review: The Walking Dead: The Game - Rely on Horror

Review: The Walking Dead: The Game 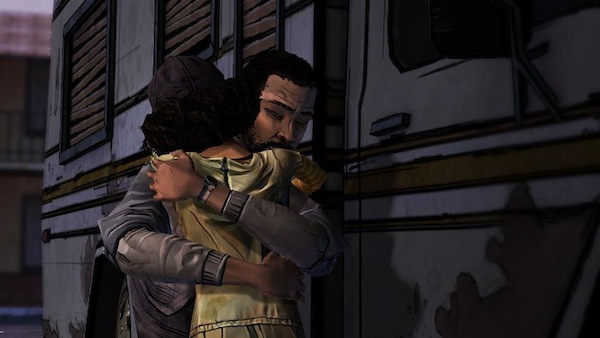 The Walking Dead: The Game isn’t exactly the kind of game you think of when you think of horror games. From the same people who brought us the Sam and Max series, Back to the Future, and the often ill-talked about Jurassic Park.  Even the game play is simplistic. It’s a point and click adventure – when was the last time you played one of those? Was it GOTY-worthy? So you may ask yourself, with all of the hype surrounding Telltale Games’ adaptation of the critically acclaimed graphic novel….what’s the big deal?

The big deal lies in the storytelling. It’s a game for gamers who are tired of the same old same old when it comes to video game narratives. We need more games like The Walking Dead – games with deep storylines and complex character development. It’s refreshing to see something like The Walking Dead in a sea of bland shooters and gritty realistic violence with all action and no substance. The Walking Dead is a zombie game, but not a shooter – if you go into it expecting that…well…you’re going to have a bad time.

The first thing that catches you with The Walking Dead are the visuals. Telltale isn’t known for their outstanding visual prowess, but more of a charming visual style. Pardon the cheese, but playing The Walking Dead almost feels like the comic panels are coming to life. Objects even look as if they’re outlined with a thick pen. And even though the graphics aren’t the most impressive, the detail is there. Facial expressions vary, people who are upset look legitimately upset, tears show through. It looks surreal, but completely natural at the same time. 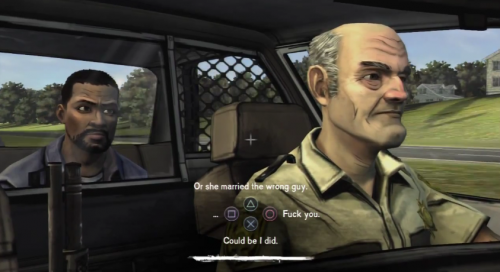 Telltale Games typically doesn’t feature gore in their games, but if you’re going to make The Walking Dead and not use gore, then what’s the point, right? Writer Gary Whitta spoke to IGN in an Up at Noon interview before the first episode’s release and ensured fans of the series that gore would be present. In fact, he confided that the Telltale team were sometimes a little uncomfortable with some of the things proposed for the game, so they were forced through. Indeed, there’s some pretty rough imagery in The Walking Dead. Blood, bits of gore, disembodied limbs, it’s all there, it’s all gross, but it fits the universe excellently and it’s assuring to know that Telltale isn’t afraid to use it. Additionally, it isn’t used to excess, so it never really overstays its welcome. 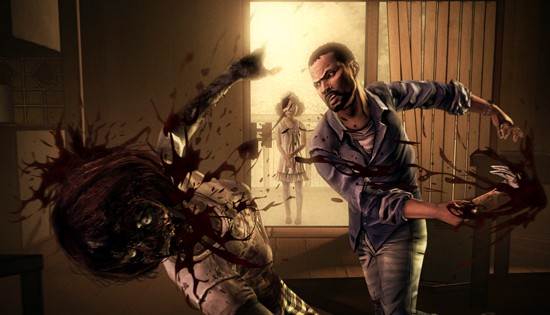 There are a few graphical hiccups that seem to crop up throughout the game, however if you’re not specifically looking for them, it’s almost hard to notice them. Playing on the PC, I didn’t notice too many, but reports of issues on the PlayStation 3 and Xbox 360 have littered certain forums and I did notice a few myself.

The sound design is about what you would expect for the title. There are zombie noises, there are background noises and a great soundtrack as a backdrop. The voice acting rises up above everything else audio wise though. There’s no matching the work of David Fennoy as main protagonist Lee Everett, Melissa Hitchison as Clementine, Gavin Hammon as Kenny and Cissy Jones as Katjaa. These characters sound like real people in real situations. The voice acting is so well done that you almost forget this is a video game, the same medium that not more than a few months ago featured such stellar lines as “Me and my sweet ass are on the way.”

Game play wise, The Walking Dead is simplistic. In its most basic form, it’s a point and click adventure. There are puzzles, but in my play through of the entire game, none of them were very difficult. There are light shooting sections, but since the game isn’t designed as a shooter or an action title they don’t feel very refined. You can aim your sights in the general direction of a zombie’s head and blow it off. In other areas, a bit more precision is required. If The Walking Dead has a major fault, aside from the technical issues, it’s that the action gameplay could use a little tweaking and be a little more challenging. 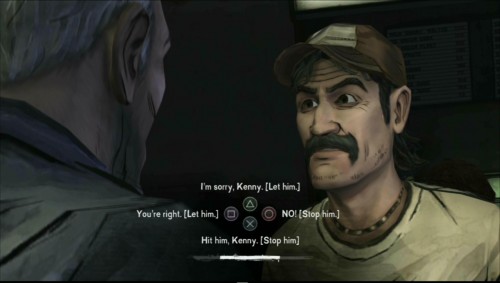 Visual cues appear on screen to show you what you have to do. For instance, if Lee is looking for supplies in a drawer, a large circle will pop up indicating that you need to check there. If Lee is getting ready to bash an enemy’s skull in, a visual cue will pop up indicating where you have to click to do so. If something is said during a conversation that someone might remember, a cue will notify you of that too. Turning them off is akin to taking the training wheels off of your bike – you might feel safer with them on, but it makes for a more rewarding experience once you take them off. Finally, we get to the storytelling! This is The Walking Dead’s strongest area. The universe of The Walking Dead is not a happy place. As any fan of the graphic novel or AMC adaptation can tell you, the people here are not happy. It’s bad enough that they have the dead rising up to eat them, but then they have to deal with other people. In a world where everything that they knew to be normal and right is decidedly not. And people really have a way of being just awful to one another.

The Walking Dead puts you in the shoes of Lee Everett, a convict who at the beginning of the game is on his way to prison. When the patrol car he’s in has a little one-on-one with a walker in the opening few minutes of the game, Lee makes it out alive and stumbles into a nearby home. Clementine’s home. Well, her parent’s house to be precise. See Clementine is alone there, waiting for her parents to come home. When Lee hears an answering machine message sent to her from her parents, it’s painfully evident that Clementine’s parents are not coming home. When the babysitter is looking for another fridge privilege, we finally get to meet Clementine herself.

She proves that she’s more than just extra baggage straight out of the gate by helping Lee through his first adventure in babysitting. From that point on, Lee and Clem are friends to the end. Not just friends – partners. Other people will come into Lee’s life in the months that the game takes place in. People you feel that you can trust – people that you grow to know and accept as family and people that will accept Lee just the same. There are people that have your back, and people that are ready to shove a knife into it. But Clementine? Clementine is always on your side. How far are you willing to go to ensure that this sweet little girl stays safe in such a dangerous new world? 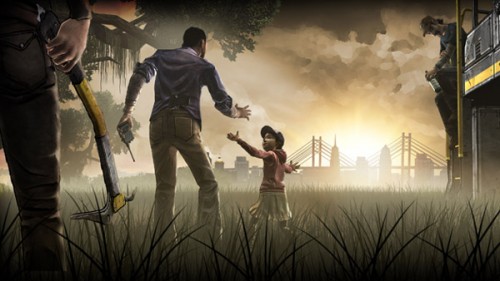 Never has a game truly made me feel such emotion for fictional characters. I cried multiple times through the course of my playthrough of The Walking Dead. Not even ashamed to admit it, it happened more than once. There were points in the game where it felt like Telltale ripped my heart out of my chest and forced it back down my throat. Characters are brought in, characters are ripped out. But to be honest, even though I knew it would make me upset, each time the credits rolled, it felt like I wanted to play the next episode more than ever.

The Walking Dead had an excellent set of cliffhangers at the end of each episode. I feel that these cliffhangers were made all the more better because I had to wait at least two months for the next episode, something that you just can’t get playing the retail release. The anticipation that built up between episodes was awesome. Seeing your decisions actually have an impact later on in the story feels like you’ve actually accomplished something great even if the end result isn’t all that different.

The absolute worst part that I feel season one of The Walking Dead: The Game has is that it’s over. While Telltale has said that new seasons are on the horizon, and the game sets itself up perfectly for a sequel, where do they go from here? How do you make something that was so amazing even better? I don’t know, but I can say without hesitation that I can’t wait to find out.