Review: The Coma - Rely on Horror 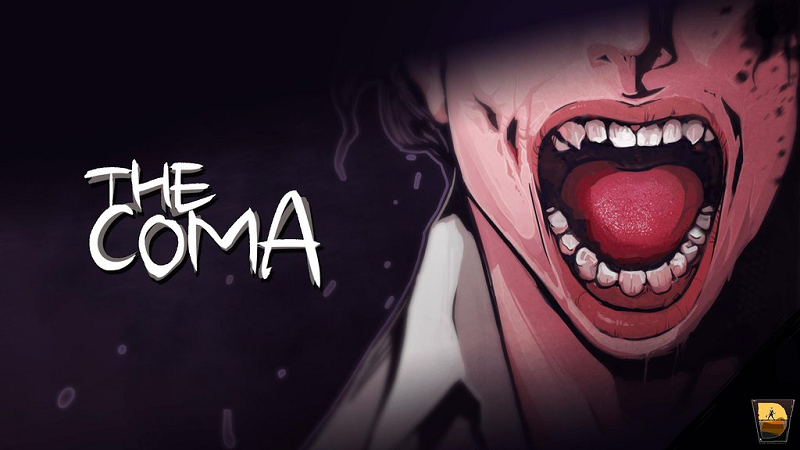 Ever since I first learned about the existence of the Korean indie game The Coma, I wondered whether or not the game would click with me. Being the guy generally in charge of covering Asian games, anime stuff, and visual novels for this site, the art style and subject matter of this horror game immediately drew me in, but I also knew the game would be inspired by Lone Survivor, a style of horror that has been hit & miss with me. While the plot and aesthetic kept me interested for a while, boredom set in long before an end came in sight.

The Coma is set in a Korean high school and follows the story of a student ill-prepared for the exam he was supposed to take on the day the game starts. According to developer Devespresso Games, the harsh lives of Korean students, who are generally overworked due to high expectations, served as an inspiration for the horror in this game and the opening certainly delivers on that. When our main character falls asleep in the middle of his test, he awakens to a dark version of the school where blood coats the walls and rubbish litters the floor. Furthermore, his favorite teacher now stalks the school wielding a sharp object and tries to violently assault him when given the chance.

A lot of the background on the school and the happenings there are discovered via notes, which stretches believability somewhat, but it’s an okay narrative device overall. You’ll learn of complicated office politics, the nature of the nightmare world, and some texts even hint at the existence of magic. While this all helped in getting the story off to a good start, the gameplay often got in the way of my fun. 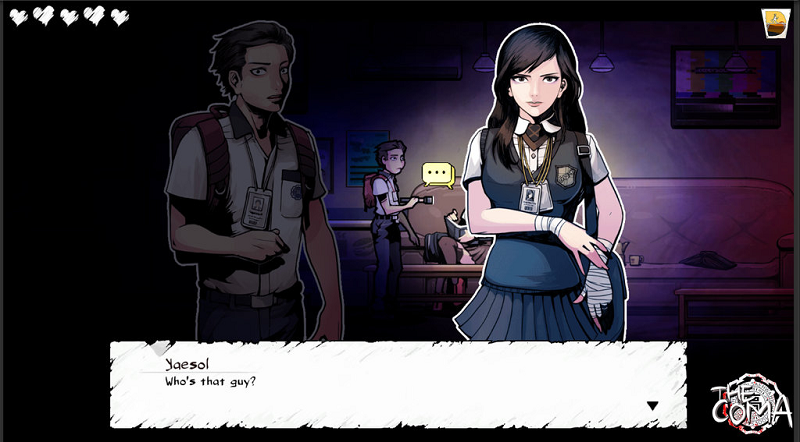 As the hero, you must scour around the multi-floored hallways of the school in search of the means to make a successful escape. Friendly characters will point you in the right direction, and the MC’s own inner-monologue will hint at the next destination, which can then be seen on the map for easier navigation. On the way you run into lootable bags and objects that give you notes for added storytelling or consumable items that can aid you when needed. The main enemy is the aforementioned horrific representation of MC’s teacher; she wanders the hallways, moving between floors at random in search of her next victim. When spotted, you got to leg it like crazy in the opposite direction to either get far ahead of her or hide in one of several different locations.

A problem I often find in horror games is that these mechanics only work when the game is actually scary, and in the The Coma, that wasn’t the case. Instead I found it to be more of an annoyance, as being spotted meant I would either need to take a hit when charging past her or move away from my intended destination. When fleeing, locating a hiding spot is necessary, but you then realize most of the doors you run into are locked, wasting your time and sometimes resulting in death. Ideally, this could be overcome by memorizing where your good hiding spots are, but the hallways all look the same, so it’s not suited for that style of play.

When I did find a place to hide, I would then have to deal with the problem that afterwards she’d still be there, hanging out in the hallways close to where I lost her. While she doesn’t enter the rooms while passive, making it unlikely you’ll be ambushed while exploring an important area, this also means you’ll often anger the monster again the second you leave your hideout. What I will say is that I thoroughly appreciate the game’s sound design, which is usually not a factor I care much for. When in rooms, you can listen for footsteps to judge whether or not it’s safe to leave yet and there are ambient noises that actually put me on edge, as they gave me reason to suspect my adversary was hiding in the shadows ahead.

If it was just the monster, that would be fine, I can deal with that, but the layout of the school is also too cluttered. With its multiple floors, it’s hard to remember which rooms you’ve been to already and where you can still go. Some important rooms are even blocked off entirely from both sides, requiring you to seek out a secret passage. Backtracking becomes a problem then when you still don’t know where the blockades are; a simple feature to let us make markings on the map would be a godsend in this regard, similar to games like Phantom Hourglass or Unepic. 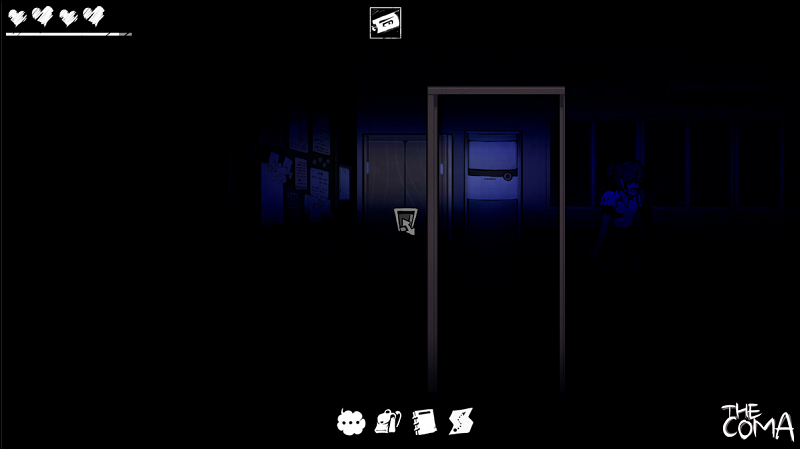 On top of that, these many quibbles piled up over time, eventually making me feel fatigued while playing. It became incredibly annoying when dialogue boxes prevented me from moving and the monster didn’t abide by that same restriction, meaning I’d stand around like a moron while being stabbed to death because I accidentally started reading a lengthy note instead of entering a door. The items are also pretty useless. I ended up filling my inventory in no time and then dealt with constant messages telling me I couldn’t pick up anything new. Drinks restore stamina and food restores health, but you can run for a pretty long time and being hit is pretty rare, so I never needed to use them. Negative status effects also have their own dedicated items, which I rarely needed.

I absolutely hated Lone Survivor, but I thought Claire was pretty great after it was patched. While both games are pretty similar, The Coma falls on the side of the more popular Lone Survivor; it offers a complicated, multi-layered world to explore that doesn’t always let you march the most direct route to any given objective. You’ll find yourself interacting with bizarre characters, carefully avoiding the patrolling monster while scavenging for supplies. While it lacks the amount of polish Lone Survivor enjoyed, I am pretty sure a player with more tolerance for such a setup will find this to be a neat addition to their indie collection.

In short, if you liked Lone Survivor and want something similar with a story rooted in something culturally different, this is the game for you.