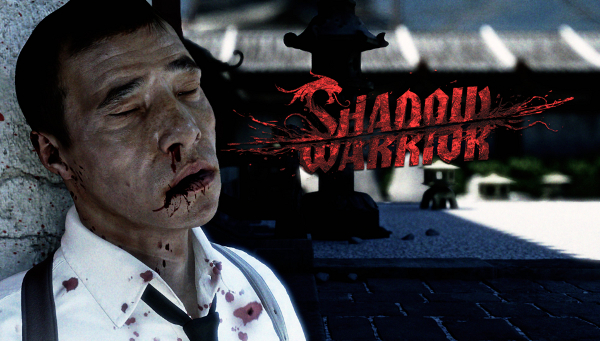 Flying Wild Hog of Hard Reset fame has dug deep into shooter history and revived the quirky and controversially offensive Shadow Warrior. Combining old-school shooter sensibilities with a modern coat of paint brings us the latest adventure of the cheesy but humorous assassin Lo Wang. Hog has brought this goofy asshole of a hero to PCs around the world in hopes to scratch that shooter itch that fans have been craving for years—dropping realism, gray and brown graphics, and military themes in favor of blood-filled sword fights, dick jokes, demon slaying, and a healthy dose of humor. There’s no beating around the bush–Shadow Warrior is, dare I say, Wang-tastic. Here’s why.

Lo Wang won’t win any awards for being anything other than the cheesy action hero archetype, but that’s what Flying Wild Hog clearly went for. From the game’s opening, it’s evident that Lo Wang is nothing but a goofy dude with a penchant for violence, puns, and innuendo. If you’re looking for a game that takes itself seriously, you’re looking at the wrong one.

Shadow Warrior reboots the story of the 1997 game but introduces us to a younger Lo Wang. On a mission for his employer Zilla Enterprises, things go awry and demons are released all across Japan. Wang soon gets caught in between an ancient power struggle between immortal beings, his own quest for revenge, and the wishes of Zilla. Shadow Warrior has a fairly decent narrative that works well to explain why Wang is doing what he’s doing, but the gameplay and the humor is what makes this game truly shine. Wang is likeable enough, providing a few laughs throughout the story, but his demon partner Hoji steals the show. When the two argue amongst themselves it’s when the game displays its best writing. The game could have greatly benefited by further expanding upon their relationship by giving us more dialogue between the two characters. Towards the end of the game some semblance of character development is made for Wang, but it felt forced and misplaced by not having the narrative support it the whole way through. Not a detractor from the experience as much as an perplexing inclusion. The same goes for an uncharacteristically dark scene toward the end of the game. 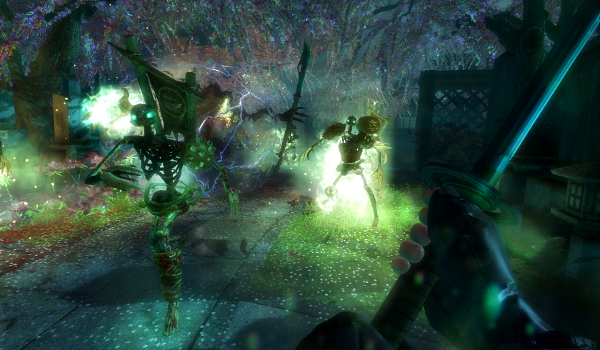 Wang’s weapon of choice is his curved tool of penetrating destruction: a katana. A heavy emphasis on swordplay is what Shadow Warrior has to offer. Starting off with light and heavy attacks, swordplay is fairly simple but rewards with satisfying results. Slices and dices performed on human or demon enemies alike create fun chunks of gore to sadistically laugh at. Upgrades add more powerful sword attacks such as a 360 degree spin and a stab. Using a mouse instead of a controller gives a more satisfying sense of control of which direction strikes will move. But if controllers are your thing, the game supports that completely.

Weapon variety is fairly high in this game. You’ve got a SMG, crossbow, shotgun, rocket launcher, pistol, and a flamethrower to play with. While I tended to gravitate more toward the SMG and shotgun as my go-to tools for killing, each weapon feels important and well-balanced enough that players can stick with one or two of them and not feel handicapped by the weapon’s capabilities.

Weapons and magic, much like Wang, can be upgraded to add new skills and options. Karma, cash, or Ki can be accumulated to increase Wang’s performance in battle. Weapon upgrades range from increased damage, dual wielding, to stacking rounds for double or quadruple the firepower. Demon hearts and heads recovered from battle can be used as weapons as well, although their effectiveness feel limited. Shurikens tag along as secondary attacks when the katana is equipped, being an unlimited projectile weapon; aside saving the occasional bullet or two per level, they’re not very useful.

Wang’s enhancements come in the form of new magic abilities and boosting his stats. Magic allows for Wang to either create a shield that repels attacks, shockwaves that knock over enemies, or simply heal. The amount of magic abilities felt sort of thin. They can be upgraded to extend more damage or effects to different enemy types, but more abilities would have been nice. Magic, along with sword attacks, are done by tapping in a direction twice and then hitting one of the two mouse button. Forcing these abilities to be done through the same buttons set for movement can potentially be cumbersome for some; having to move in an undesired direction to cast a spell seems a tad messy and probably could have probably been implemented with dedicated keys—conversely, once comfortable with the setup abilities do tend to flow well within combat, so it might be worth overlooking for some.

Wang’s skills would be nothing without some fleshy enemies to poke and stab. A diverse assortment of demons threaten Wang’s advancement through the plot, each offering up a small tactic change to dispose of them. As expected, the standard grunts are susceptible to any and all types of damage. Higher class demon types mix things up a bit by equipping shields, flying around, exploding, or having only one weak spot. The way the enemy types are introduced over the course of the campaign felt well paced and the introduction of new types kept battles interesting. Boss battles are pretty exciting at first, but it quickly becomes apparent that the same strategy can be repurposed for each. They’re not all that challenging either. 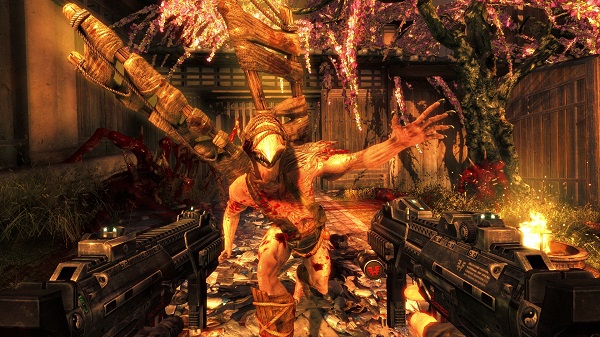 Environments, while linear, offer up a sizable amount a breadth, giving players the opportunity to wander around and not be forced to always go straight ahead to their goal. A variety of secrets and bonus items are in abundance, but I found that they were never too hard to find and the rewards were strictly based on skill improvement—a lost opportunity for some temporary power-ups or secret unlockables.

Expansive maps such as the ones found in this game may keep exploration seekers somewhat satisfied, but I found myself getting lost a few times and struggling to find the right object to interact with. In terms of objective structure, Shadow Warrior does not hold your hand. Finding the right keypad or object needed to advance can sometimes be difficult when having so much ground to cover (or if the game glitches and does not load an element needed to progress). This lack of guidance is a staple of 90’s shooters, so it might be expected and even welcomed by some. The general difficulty of the overall game is fairly simple, with a few challenging moments that may require a few retries. But overall, if you’re looking for a real challenge, Normal difficulty won’t exactly deliver.

Now, I won’t pretend to be an old-shooter aficionado, but I know what entertains me. Shadow Warrior is a tribute to 90’s shooters and that’s apparent to me despite missing out on so many. It’s a charming and unapologetically silly game that’s a whole lot of fun to play. Selling for $40 and offering more than 10 hours of playtime, there’s enough bang here to more than justify your buck. Shadow Warrior bleeds the essence of an era when games focused on putting a smile on your face, fun in your hands, and a hero like Wang in your heart.