Four years after the release of Resident Evil 4 into the Gamecube system, Resident Evil 5 hit shelves on March 13th, 2009 on the USA.

Like the past entry of the main series, Resident Evil 5 follows the same game basis, this being an Over the Shoulder camera style, human type enemies out of the well known zombies and some action, actually more action that it’s predecessor.

Back in 2008, before the initial release and just after a few trailers, the game was critized
by having as new enemies “black” people (as the main setting for the game was Africa) and the fact they were being killed by a white man.
After those critics, Capcom released a new trailer, this time depicting a more diverse group of enemies like arabs, as well as the introduction of Chris’ partner, Sheva Alomar.
Although the producers denied that the critics altered the production at all.

Since the production stage of the game, the producers said one of the main focus was the graphics, and they did manage to create an amazing work with the graphics with this game.
Beautiful scenarios, impressive character and enemy models, great lighting and shadings, highly detailed weapons and vibrating explotions. Even though the contrast of the game itself is made with a green shade to give certain atmosphere.

This game’s soundtrack was made by composer Kota Suzuki, who teamed up with the Hollywood Studio Symphony, recorded at the 20th Century Fox Studios in Los Angeles with an ensemble of 103 instruments.
The sound speaks by itself, great compositions to go along with the themes of the game and action unfolding. the work for this soundtrack is remarkable and astounding, one of the most worked soundtracks in the series.

The game mechanics from the previous installment prevail in this game, with some added features to go along with the fast pacing action of the game.
The most notable one is the addition of a coop partner that follows you the entire game, you depend on this partner to survive and make your way through battles or puzzles.
If the partner has been grabbed you have the option to help him/her, and when a partner has been severely injured, you must search for your partner and heal him, otherwise the game will be over.
Another feature added is the inclusion of a fast change weapon system, and the selection of the items in game occur in-game, which means the game doesn’t pause when you go into the Item Menu.
You can move your weapons and other items according to a 9 squeare menu, and if you move an item to the squares located in the north, east, west and south of the menu, you can do a Quick selection of these items without entering the menu by just pressing the D-Pad. Good for a quick change if you don’t want to pause the action.
Also, another brief feature is that the character now bends to grab an item or stretches his/her arm, one idea the producers took from Gears of War, along with new control schemes that matches those from Gears of War, and other controls like the usual RE 4 style.
Even though, the horror fact that categorized the series from the very beggining is, if not present, lacking in this game, not the main focus in this entry. 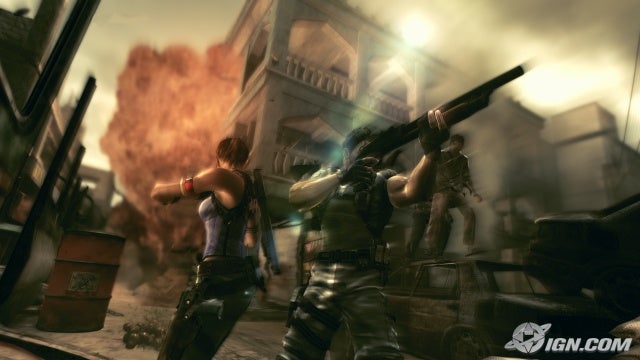 One of the most intriguing parts of the franchise itself has always been the story, and the producers promised the introduction of story from the original RE, as well for enemies from past games.
The only enemy that saw light on the final release was the Licker, and the story told is the one of Chris, Jill and Wesker.
The story in this game is somewhat cliché, cheesy and sometimes odd and rushed.
The script is something that leaves a lot to be desired, definetly not the best script in the RE series. 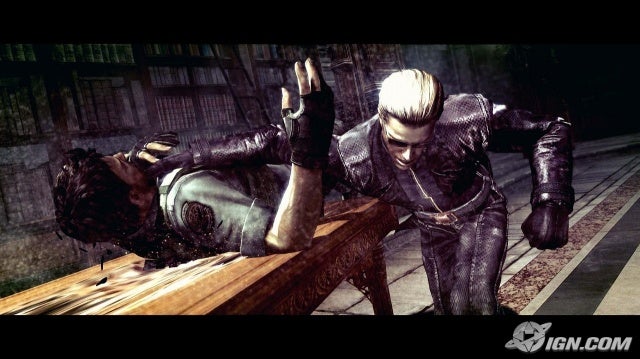 Conclusion
The game is a good adition to the action genre that RE 4 brought, along with a new storyline, but the remarkable horror that was something inherit within the series has been lost in this last installments.
The game itself is greatly enjoyed, but the game is sometimes shadowed by it’s poor story.